📸 Through The Lens | Lines

Stephen Villines is another one of the exceptional student-athletes possessing a rare blend of DNA. He stands alone as the all-time leader in games saved for KU baseball with 40. That is an impressive number made even more notable by the list of KU closers who came before Villines when he broke the record during his senior season in April 2017.

Don Czyz capped his career in 2006 with 31 saves and was the closer on the mound when KU defeated Nebraska to win the Big 12 Baseball Championship that year in May. Then there is Paul Smyth with 27, Jordan Piche’ with 15 and Zack Leban and Jimmy Walker tied for fifth with 13 career saves to round out the list.

All but two of those relievers were hard-throwing big men. Piche’ pitched only two seasons for the Jayhawks with a “how can he do that” Gumby body and remarkable control to achieve his impressive totals. Villines also defied normality with his submarine delivery accomplished with a 6-2 body weighing only 175 pounds. “Lines,” as he is called, was a craftsman going about his trade when he strode to the mound.

The first photograph of the three that accompany this story was one I knew I dreamed about as Laura and I drove to the Big 12 Baseball Championship in May 2017 in Oklahoma City, Oklahoma. Before the game, I spoke with Wally Marciel, the director of baseball operations, to make sure I could get inside the KU bullpen in right field. With KU on the way to an upset victory over TCU in the first-round game, I kept my eye on the bullpen. Seeing Villines up and loosening in the bullpen, I made my move to the pen.

The purpose was to capture an image of one of the KU baseball greats entering what might be his final game, even if the score made it a non-save game. As Villines opened the bullpen gate and strode away, I followed him as far as I felt I could without getting into trouble. The sun beaming through the stadium was just an added blessing from above. I was so happy at that moment for Villines and thankful for a photograph I will always cherish. 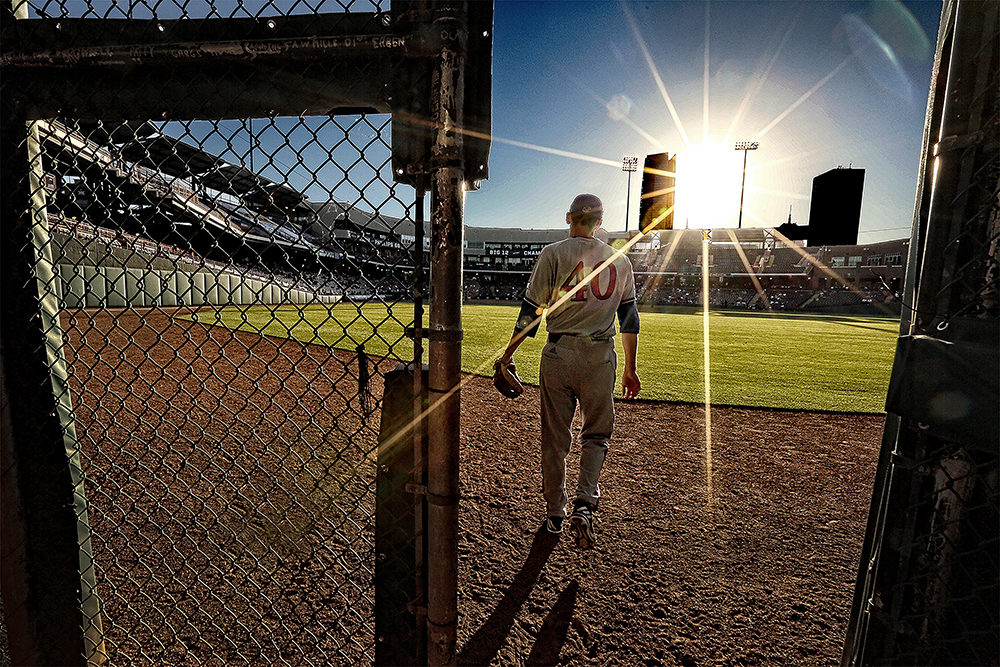 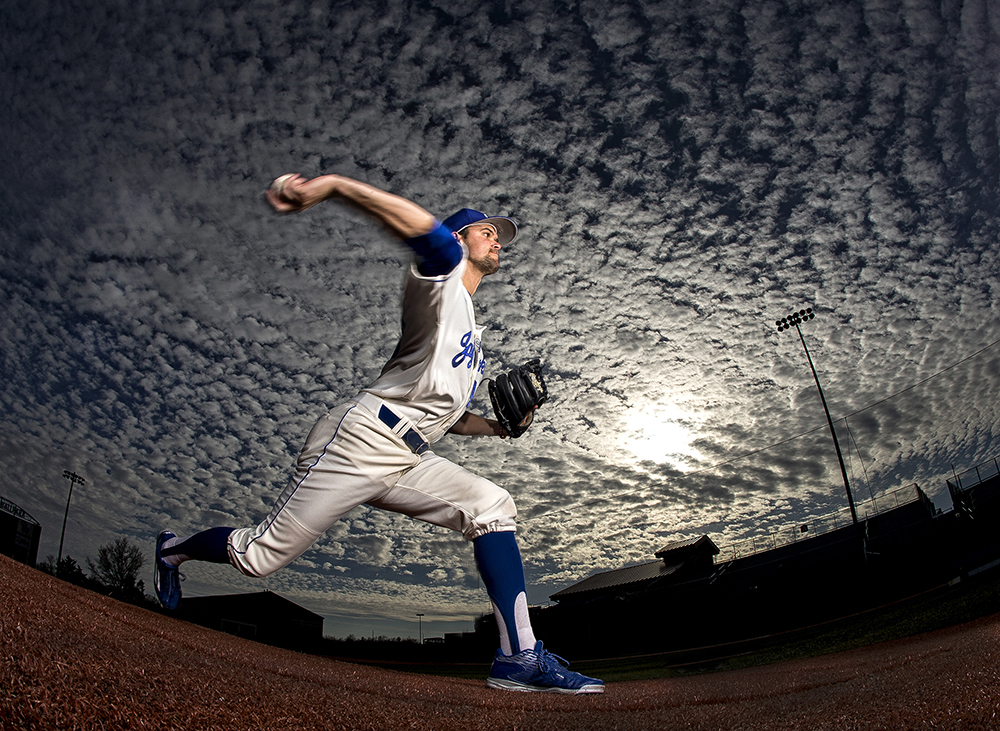 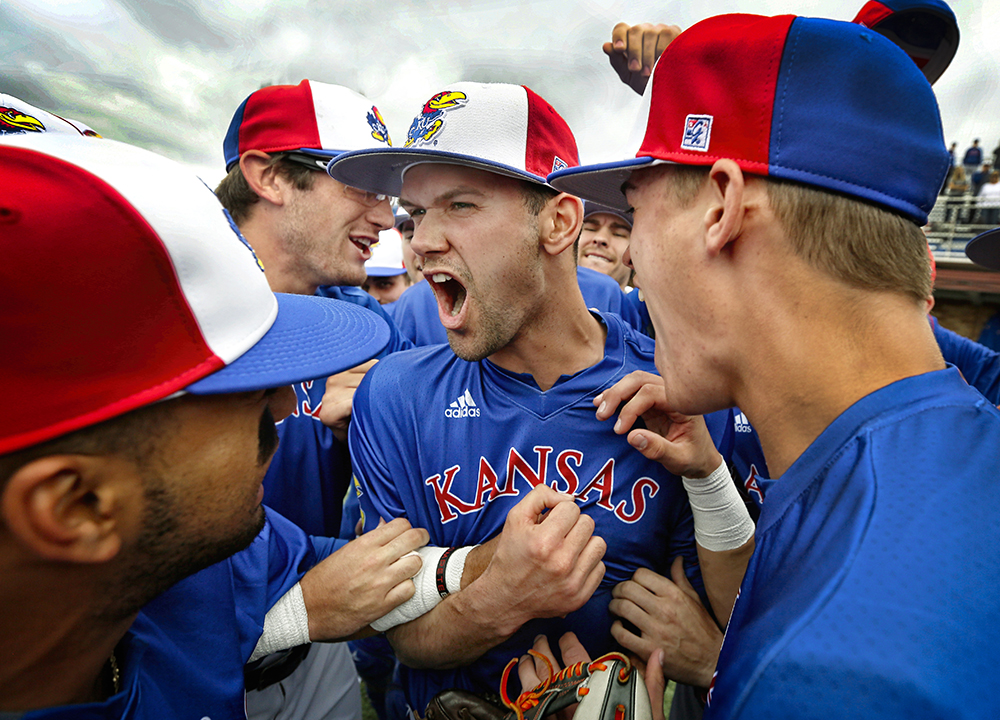 Working with Villines, I discovered he never let success go to his head or lingered too long over tough times, at least on the outside. He rolled along with a smile on his face. In March 2017, for a Rock Chalk Weekly story, Lines emerged from the dugout inside Hoglund Ballpark for a variety of planned photographs. I wanted to make sure nothing happened to his valuable arm. I encouraged him to warm up by throwing into the batting cage.

Setup after setup, he would do everything I asked, throwing with ease pitch-after-pitch. Every time a thud resounded from the ball hitting the tarp on the backside of the cage. The sound remained just as crisp as his first pitch. Close to the end, I was again blessed with a classic Kansas sky that mandated another quick strobe setup with Laura’s help for the photograph that topped them all.

A month later, Villines passed Czyz on Kansas’ all-time record list. The final photo was taken. As is my style, I squeezed in as close as possible to capture all the emotion of Lines’ teammates mobbing the joyous new king of closers. Nothing I can write sums all this up better than head coach Ritch Price’s thoughts which he shared this past Tuesday.

“I’m so proud of Stephen. He came to KU as a recruited walk-on, earned a scholarship, graduated with honors, became a First Team All-Conference pitcher and signed a professional baseball contract,” Price said. “What a great tribute to his work ethic, competitiveness and mental toughness.”

“I have no doubts that he will pitch in the major leagues shortly,” Price said of Villines, who is now climbing up through the New York Mets farm system. “Stephen is an all-time great Jayhawk and an even better person. It was an honor and a privilege to coach him!”

Two nights after the first picture, Villines entered his last Jayhawk game in a loss to TCU. Even in defeat, Villines came in to do his job, striking out two of the three batters he faced to cap a glorious KU career.

“The past four years have been an unbelievable blessing for sure,” Villines said after the game. “I’m still kind of tearing up. It’s for those guys every day going out on the field and in the clubhouse. It’s for those guys, and that’s what makes it special. It’s for the guys on the team.”