📸 Through The Lens | Lokedi

Singling out several student-athletes while writing these stories worries me. I think so much of virtually every student-athlete I have been privileged to photograph over the past 23 years, yet sadly, I cannot write about everyone. My hope is they all know how much I respect them. There are some, though, who possess unique DNA. In the coming months, I want to highlight some of these amazing talents. I start with cross country and track & field star Sharon Lokedi.

A list of 51 career highlights opens the biography of Lokedi on the KU website. Arriving at KU from Eldoret, Kenya, for the spring semester in January 2015, Lokedi immediately began a remarkable career on both the track and cross country circuits. Running races from 1,500-meters up to 10,000-meters, Lokedi’s times grew faster as awards accumulated.

A 10-time All-American and 12-time Big 12 Champion, Lokedi capped her KU career with a dominating performance in Eugene, Oregon, in June 2018, with a mighty last lap that led her to the NCAA Outdoor Track & Field Championships 10,000-meter title with a time of 32:09.20. That mark broke a 30-year-old meet record to truly set Lokedi apart.

“Apart” is not the word that best describes Lokedi, though. To “be part” is what I will always remember about Lokedi. Lokedi won so many races with seeming ease, but rarely were they accompanied by big personal celebrations. Lokedi inevitably wanted to make sure she thanked all the runners in her wake and cheer on KU teammates to the finish.

My wife, Laura, worked as the track & field and cross country academic advisor for all but a few months of Lokedi’s career at KU. She described Lokedi perfectly with the words “Genuine, happy and appreciative.” 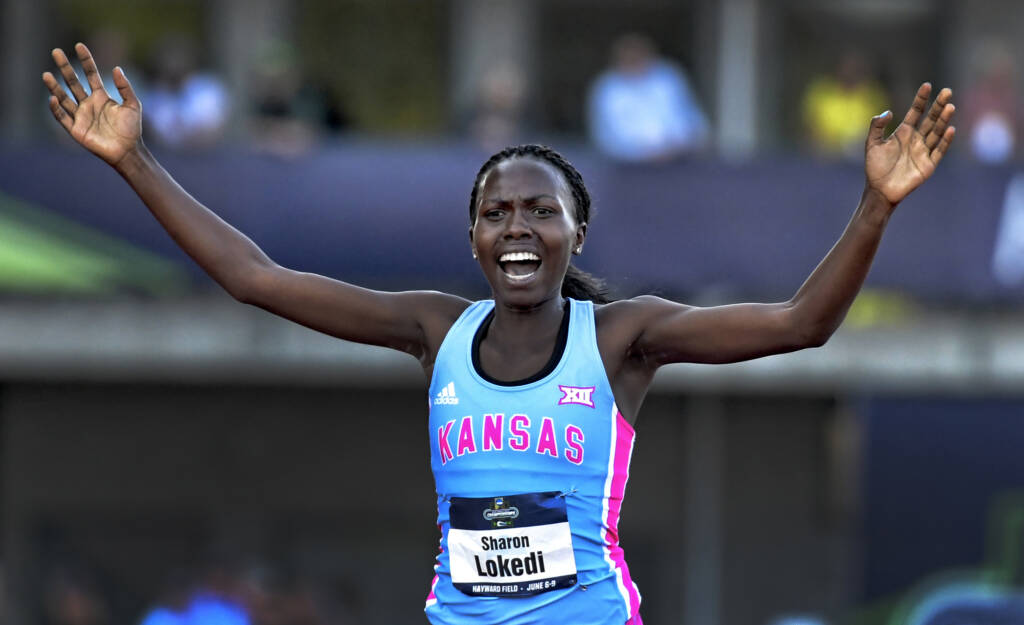 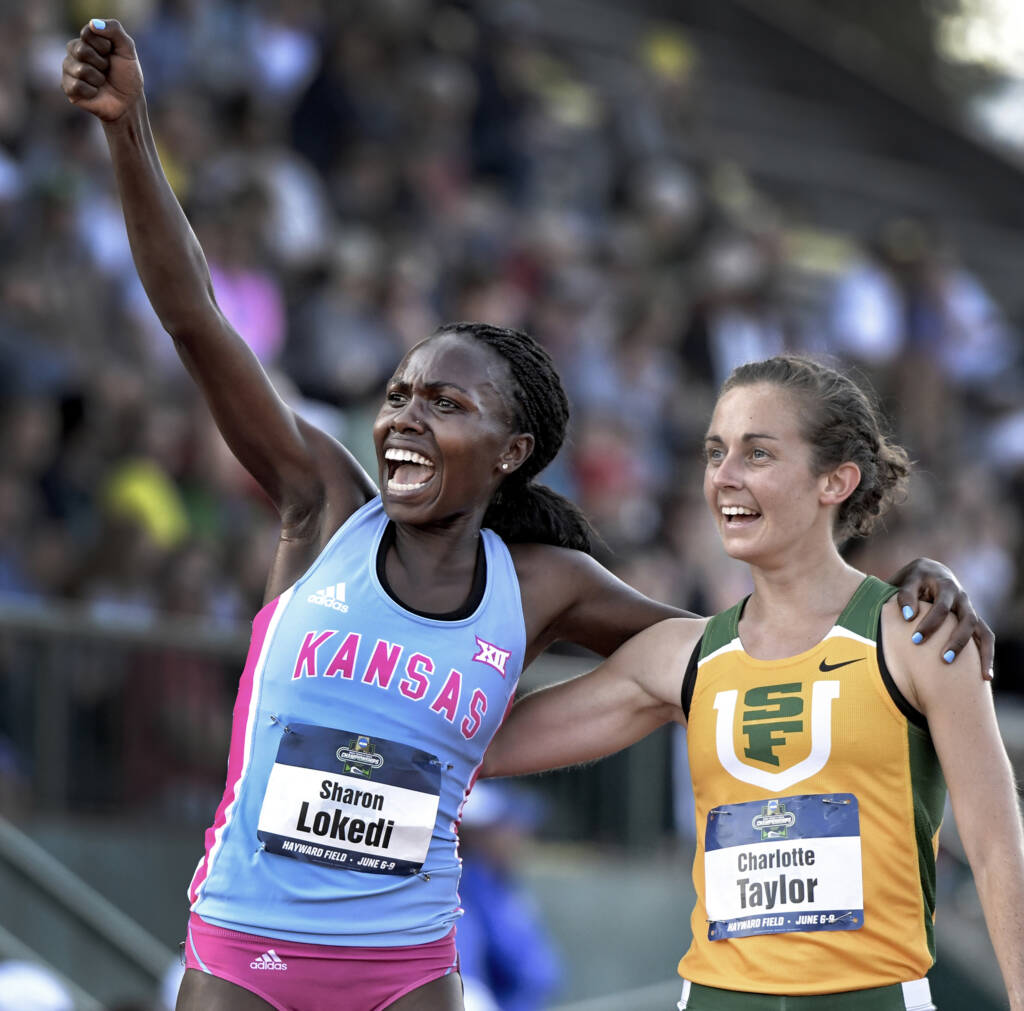 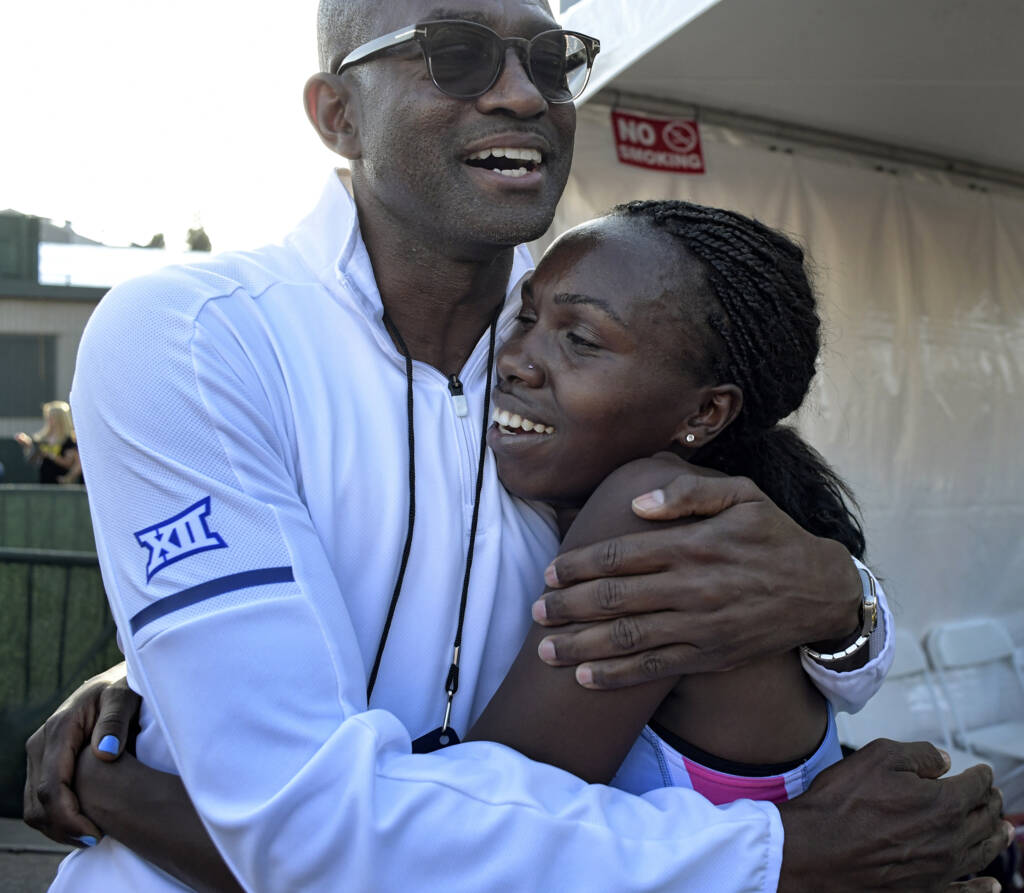 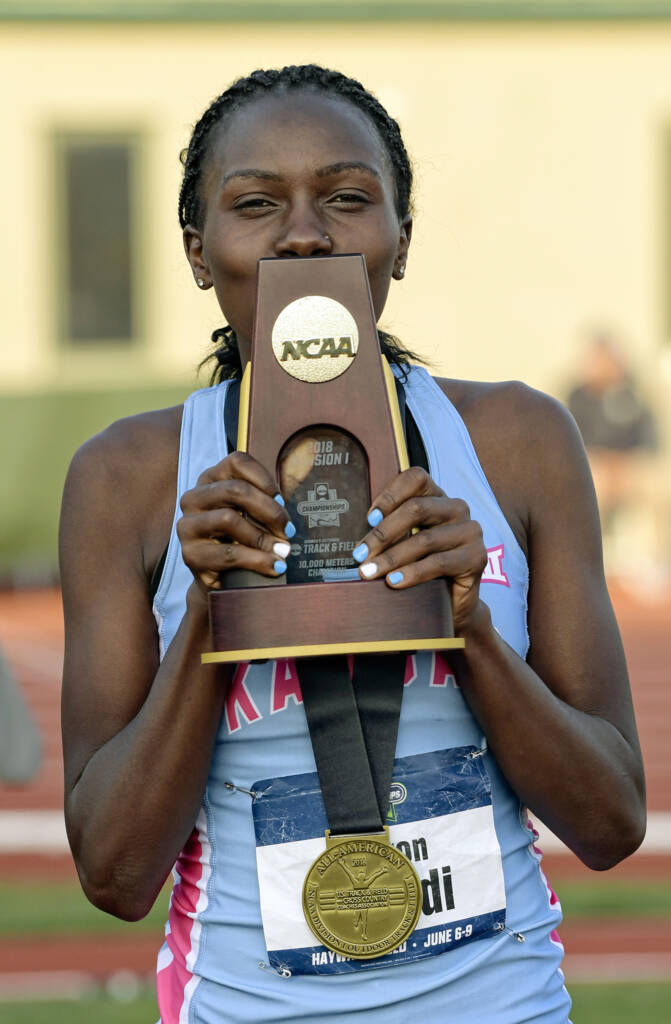 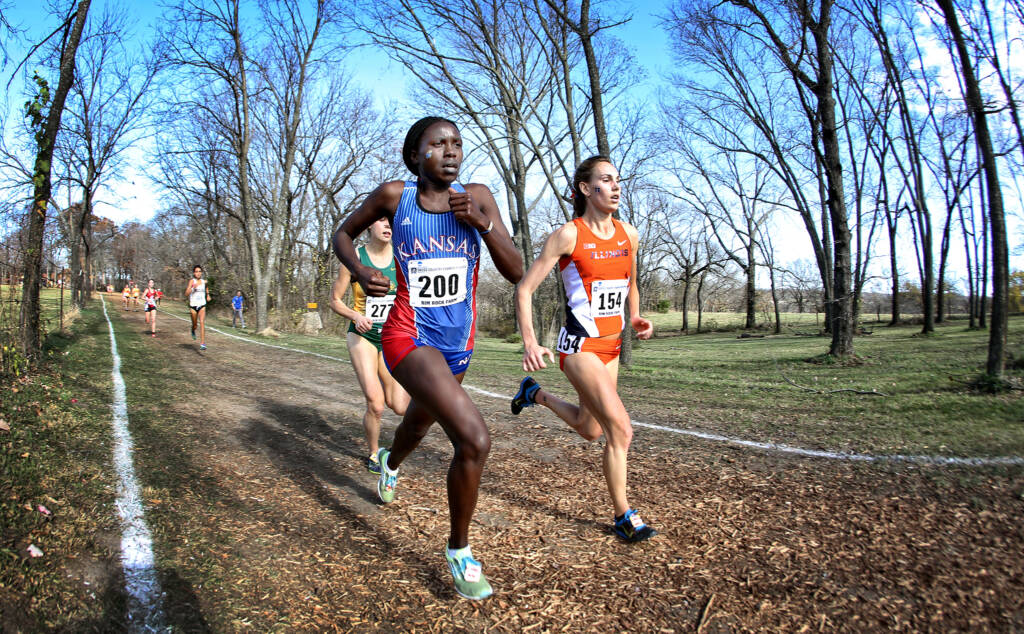 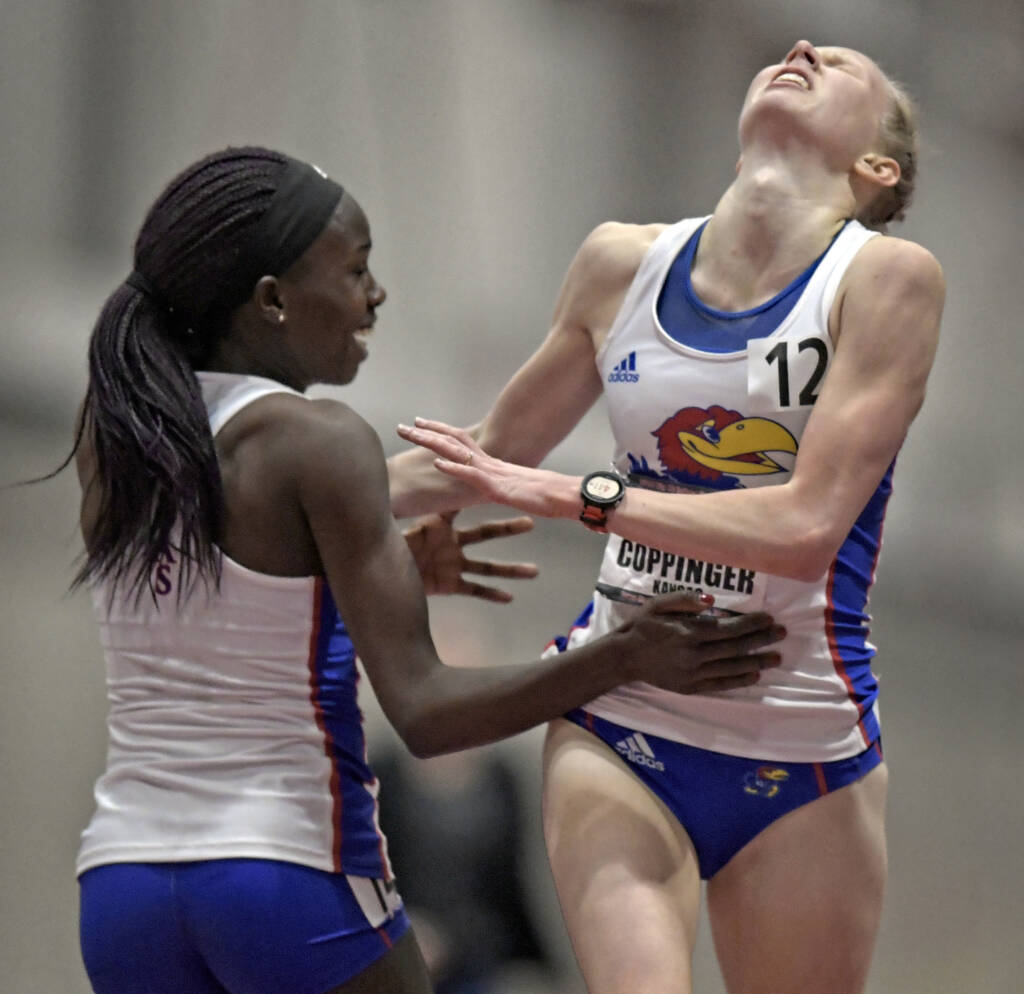 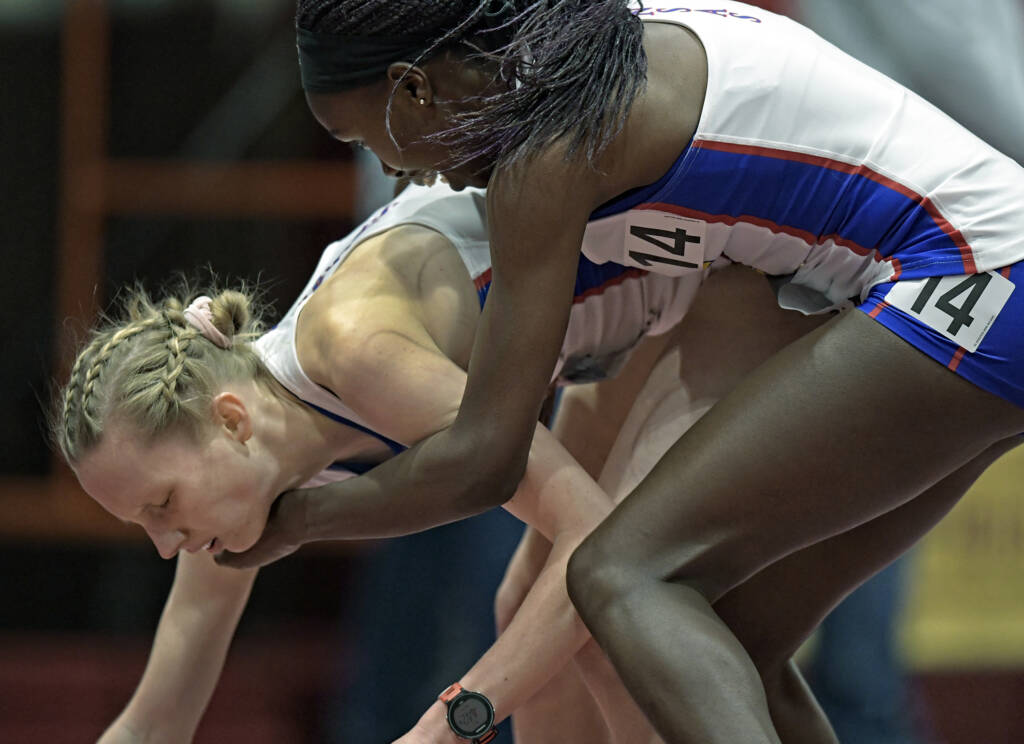 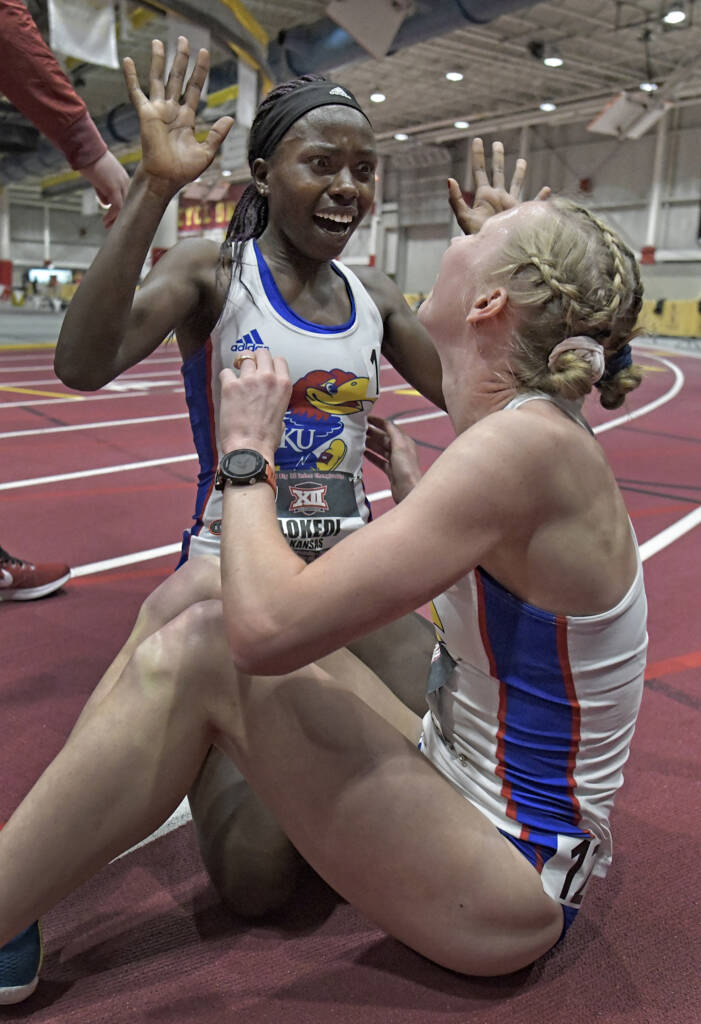 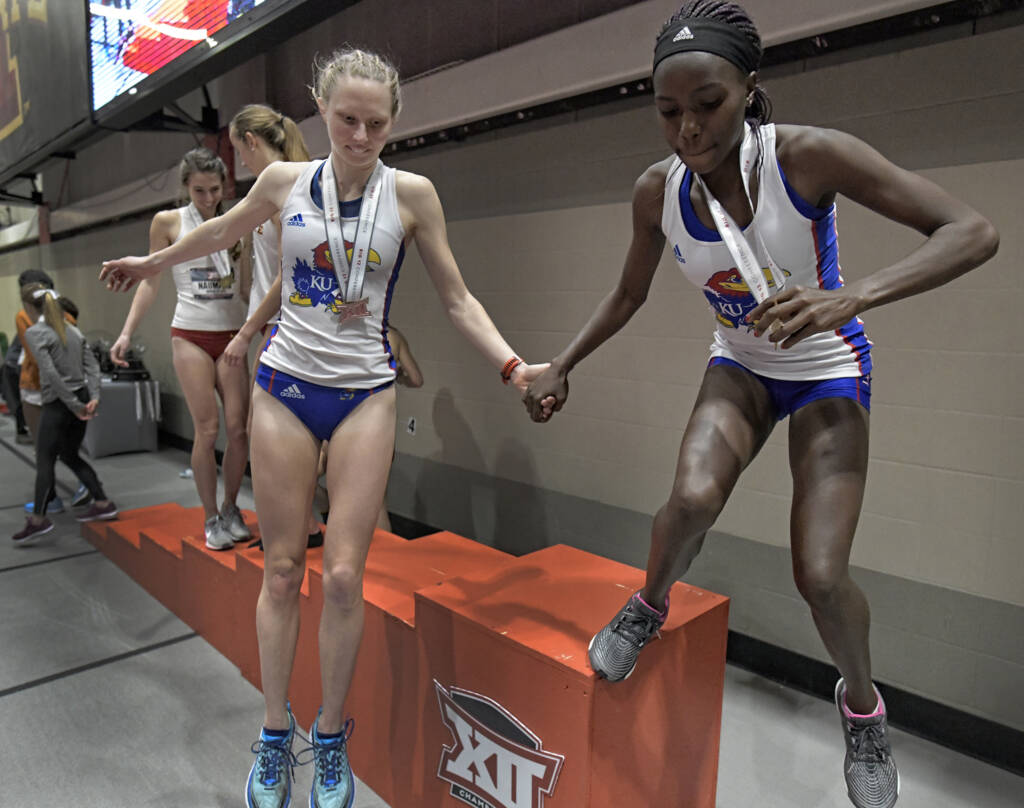 At the Big 12 Indoor Track & Field Championships in February 2018, Lokedi easily won the 5,000-meter run on Friday in Ames, Iowa. She came back on Saturday to dominate the 3,000-meter race. What happened after that victory encapsulates Laura’s words perfectly.

Teammate Courtney Coppinger, running with full gut-wrenching intensity, surged to the finish line to take second place by sixteen-hundredths of a second. There to catch Coppinger as she seized in agony, was Lokedi. The joy of the two dear friends sprawled on the track will remain with me forever.

After she finished sixth in the 10,000-meter final at the NCAA Outdoor in Eugene in June 2016, Lokedi stopped to talk to me as she walked from the track. Even though she clocked a personal-best time, she clearly felt she should have done better. I told her not to worry and that she would win the NCAA title in two years. That is precisely what she did.

Amidst all the joy and celebration that followed the monumental victory, Lokedi called my name saying, “You were right two years ago.”

Someone who remembers a passing line from two years earlier is truly sincere.

Lokedi now lives and trains in Flagstaff, with her boyfriend and former Oregon star Edward Cheserek. The two Kenyans train in the high-altitudes that make the Arizona area the new mecca of professional distance runners.

Recently, I was reading a track story online with Laura beside me. An advertisement for a running shoe company popped up. Laura immediately recognized Lokedi running as the featured athlete in the ad. She texted Lokedi and received an almost immediate reply with her thanks for noticing. That special DNA Lokedi possesses makes her an exceptional runner but an even greater person.