📸 Through The Lens | Saying Goodbye

The time has come to make full disclosure that today, Tuesday, June 30, is my final day as the staff photographer for Kansas Athletics. This is a poorly kept secret, but some still do not know this or believe I would go through with leaving.

As I pondered my departure from Kansas Athletics during the past year, many people questioned me with the thought, “Why would you ever leave KU?” There is an everchanging list of student-athletes and a core of coaches and assistants from the 18 sports KU fields that kept me at KU for 23 years. Even now, after a spring without sports, the names on those rosters tug at me to stay.

Some parents have begged me not to leave KU until their son’s or daughter’s eligibility has been exhausted. A few coaches bargained with me to stay until we could retire together. The only problem I found with those considerate appeals is that there are always new parents. The coaches’ retirement plans loom far into the future.

As much as I fight against this fact, I cannot escape the reality that I am 69-years-old. I have been God-blessed with good health and an unfailing desire to use an immense work ethic. Nevertheless, logic sometimes cries to me that I cannot keep working at the pace I have for KU forever. This past school year appeared to be the perfect time to cap my KU career.

Then the pandemic arrived. I have long believed no retirement is ever as perfect as hoped. Indeed, mine was not. The cancellation of men’s basketball’s postseason run and with spring sports wiped from the calendar, my favorite time of the year at KU was spent in semi-isolation.

Believe me, there is not a “woe is me” thought. This is life, which we all know can be very cruel. A friend drove home that point to me this weekend. He noted that as deaths from the virus rose in the United States to over 125,000, the population of my hometown of Topeka standing at nearly 130,000 is a symbolic way to put the devasting toll in perspective. Imagining the Capitol city of Kansas completely lifeless made no Final Four game, Kansas Relays, tennis match or golf championship seem as important.

There are two essential tenants in my life. The first comes from James 1:17 in the Holy Bible.

“Every good and perfect gift is from above, and cometh down from the Father of lights, with whom is no variableness …”

The second comes from Steve Prefontaine, the famed American distance runner from Oregon.

“To give anything less than your best is to sacrifice the gift.”

Together with my wife, Laura, I try to live by these two tenets. We believe we have been blessed with many gifts by God. A failure to use them to the fullest would be shameful.

One of those great gifts was to meet Laura, become friends, date, and at KU’s Danforth Chapel, join together in marriage for nearly 19 years now. As Laura works from our home in her role as the academic advisor for the KU swimming & diving and rowing teams, I could not have been prouder. Those two teams compiled outstanding achievements in the classroom; a 3.7 GPA for rowing and a KU-record 3.95 for swimming & diving.

To attempt to list fully the gifts KU gave me as a photographer would be fruitless. I would leave out so much. A man of my age rarely feels he is getting better at something, but I do feel that way about my photography. KU gave me the freedom to explore the lives of student-athletes in ways rarely done before. I have never tired of that.

For all the National and Big 12 Champions and Championships I have photographed, the quiet moments away from the courts, fields and water made more than just beautiful photographs. They allowed me to understand and appreciate what truly made these student-athletes and coaches fascinating in every aspect of their lives.

You might notice I haven’t used the word retirement often in this story. Yes, I am retiring from KU, but not from photography. Nearly three years ago, a thought came to me for my future after KU. It has grown and grown and led me to this decision. 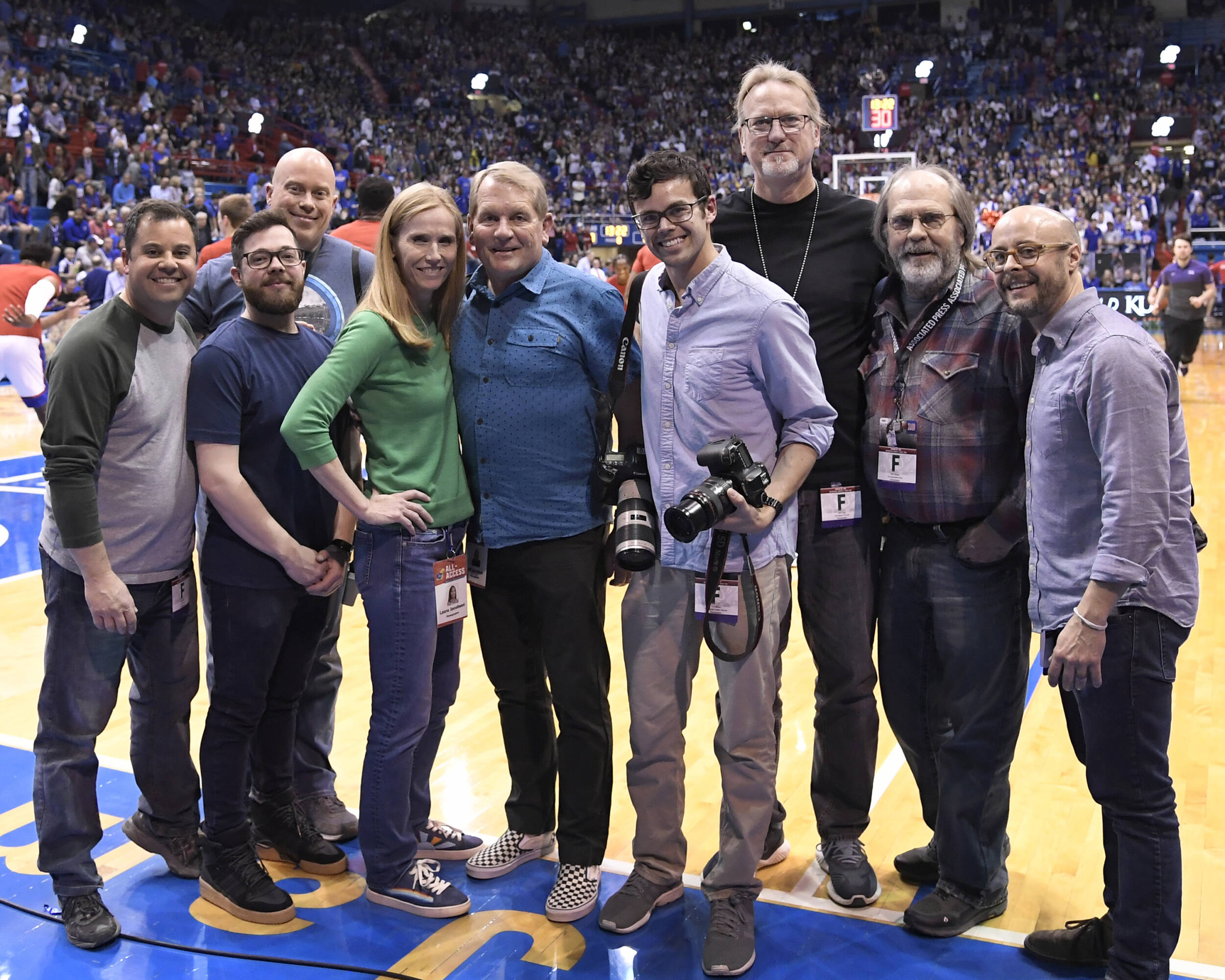 I want to photograph the events and the people that makeup what I call “The Heart and Soul of Kansas Sports.” When I say Kansas, I mean the state of Kansas. No KU, Kansas State, Wichita State or even most small colleges. Sports in this state encompass so many amazing events and the people who participate in them.

There are rodeos, sprint car races, softball tournaments that play non-stop for 24-hours-a-day. There is the intensity of city league basketball in Wichita, the “War on 24” highway between Silver Lake and Rossville High Schools. The Liberal Pancake Race and six-man football. The world’s fastest backward runner coaches at a small Kansas college. There are many more. When sports fully resume, each will take on new meaning after the coronavirus.

To accomplish this, a not-for-profit company, Action Image Photography, Inc., was established. All donations are tax-deductible. I have begun work on some events already and will continue to raise money in the process. My goal is to document sports and the people who play them in each of the 105 counties of Kansas. An audio-visual show will be donated to the state of Kansas for showings in all those counties.

It is a huge task that has given me pause, especially during this isolation. However, Laura is quick to assure me that God has placed this project on my heart. To fail while trying is to appreciate that gift. To fail without trying is to sacrifice the gift.

To cap my career, I remind myself of Colossians 3:23.

“Whatever you do, do your work heartily, as for the Lord rather than for men.”

To the student-athletes, coaches, staff and KU fans, my heartfelt thanks. I never dreamed of working at KU for 23 years, and I owe that to all of you.

The two photographs that go with this story mean very much to me. The picture of Laura and me from a KU football game at Iowa State on a rainy Saturday was taken by our friend Jon Robichaud. It was used in my book “Tribute to Crimson & the Blue.” Despite the sloppy weather, we both were so happy even though we hate being photographed.

The second comes from my final game at Allen Fieldhouse as the KU staff photographer by Brooke Boyer. These are some of the people I have shared the baseline with for years. They are wonderful photographers but even better people and friends. My best to every one of them.

Many kind thoughts have been shared with me by everyone from the Director of Athletics to the wonderful woman who cleans Allen Fieldhouse late at night when I leave, often with Laura. Every sentiment is appreciated.

I will conclude this long piece with something that was done quietly and simply. The great Frank Mason III was posing for me for a magazine cover. I thanked him for all the amazing photographs he made for me during his career. He began to walk away but paused and whispered, “We all know how good you are. Thank you.”

Nothing could mean more. God bless and keep you all. See you again, I pray.