📸 Through The Lens | Terry Allen

Last week, KU and Missouri announced they will renew their football rivalry for four games beginning in 2025. My thoughts quickly turned to former Jayhawk football coach Terry Allen. On November 14, 2000, Allen coached KU to a decisive victory over Missouri in Columbia. The 38-17 triumph in front of 61,794 fans was one to cherish.

After a close first half, KU led 17-14. KU outscored the Tigers 17-3 in the second half in a dominating show of strength. As Roger Ross crossed the goal line to cap a slashing 62-yard punt return with 4:30 left in the third quarter, the gold-clad Tiger fans began a mass exodus from the stadium. With the score 31-17, the pocket of cheering KU fans tucked into the southeast corner of the stadium rivaled in size what remained of the homecoming crowd inside Faurot Field during the fourth quarter.

For the game, KU picked up 25 first downs to Missouri’s 11. A lopsided statistic showed the Jayhawks outrushed MU 219 yards to 10. The visitor’s 209 return yards, compared to MU’s two yards, helped tilt the game heavily in favor of KU. The defense picked off four passes.

That game, and the smile on the face of head coach Terry Allen and his animated run onto the field in celebration, remains one of my favorite KU memories.

Allen came to KU following a distinguished career as the head coach at the University of Northern Iowa, which began in 1989. During the final seven years of his eight in Cedar Falls, Allen’s teams won or tied for the Gateway Football Conference title. He led UNI to the semifinals of the NCAA Division I-AA playoffs twice. NFL Hall of Fame quarterback Kurt Warner played for Allen.

His success in Iowa did not translate as well to the Big 12. Allen never had a winning record at KU. His teams did defeat Missouri in three of his five seasons leading the Jayhawks. The 38-34 loss in a back-and-forth game at home in 2001, however, ended any hopes of Allen continuing at KU. After two more defeats, he was dismissed with three games left in the season. 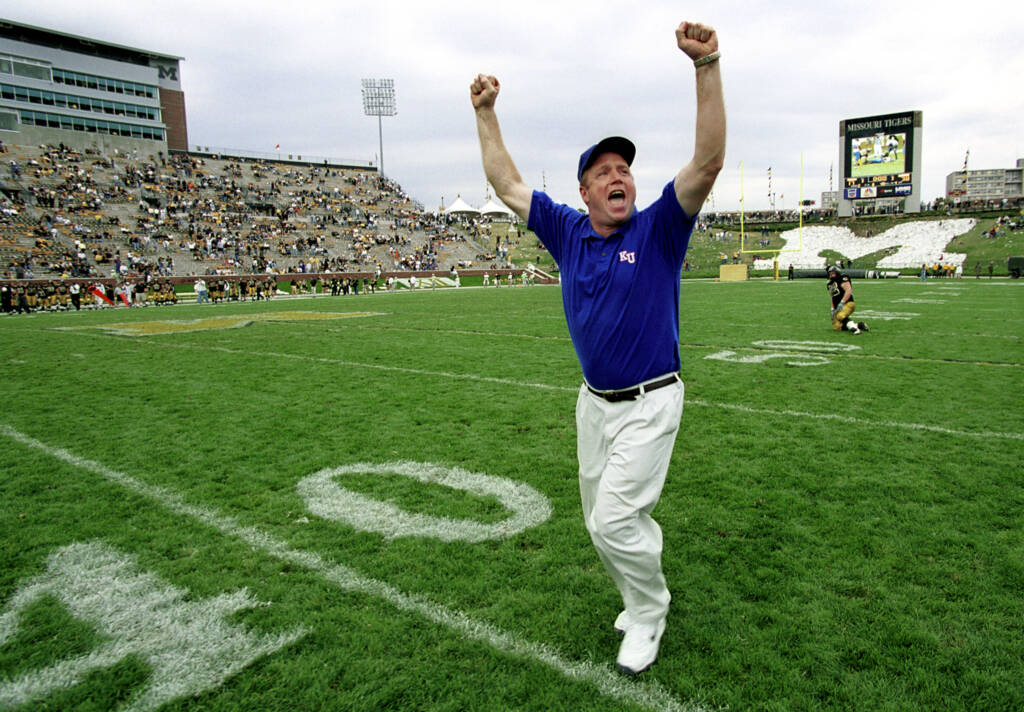 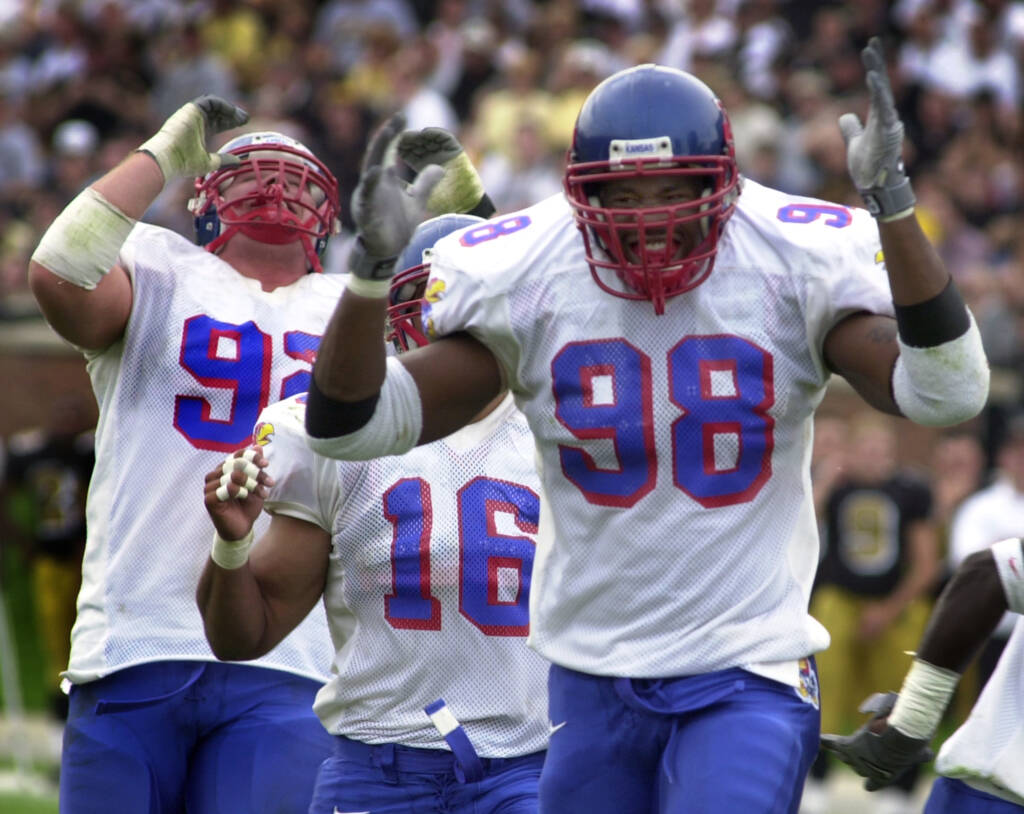 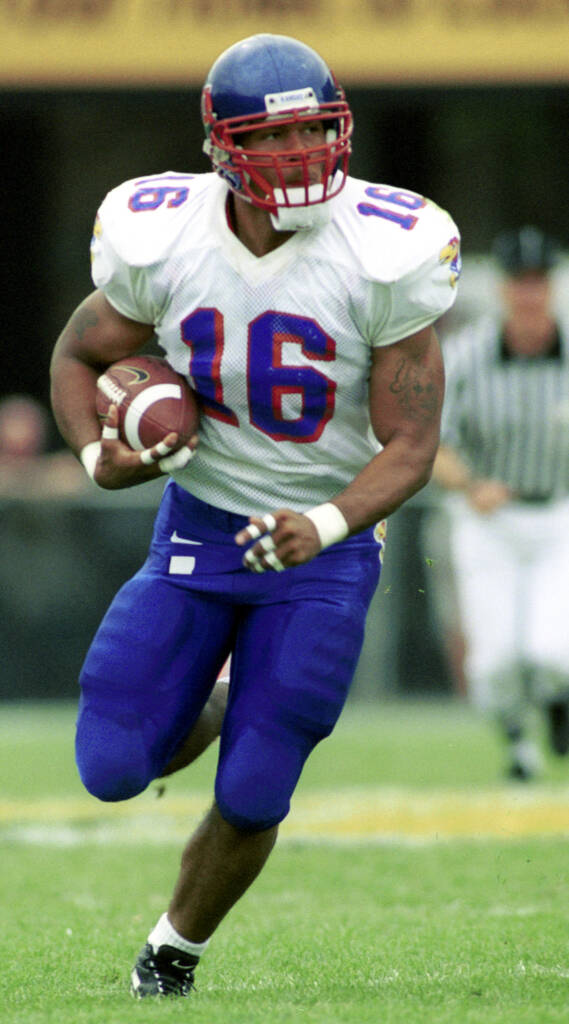 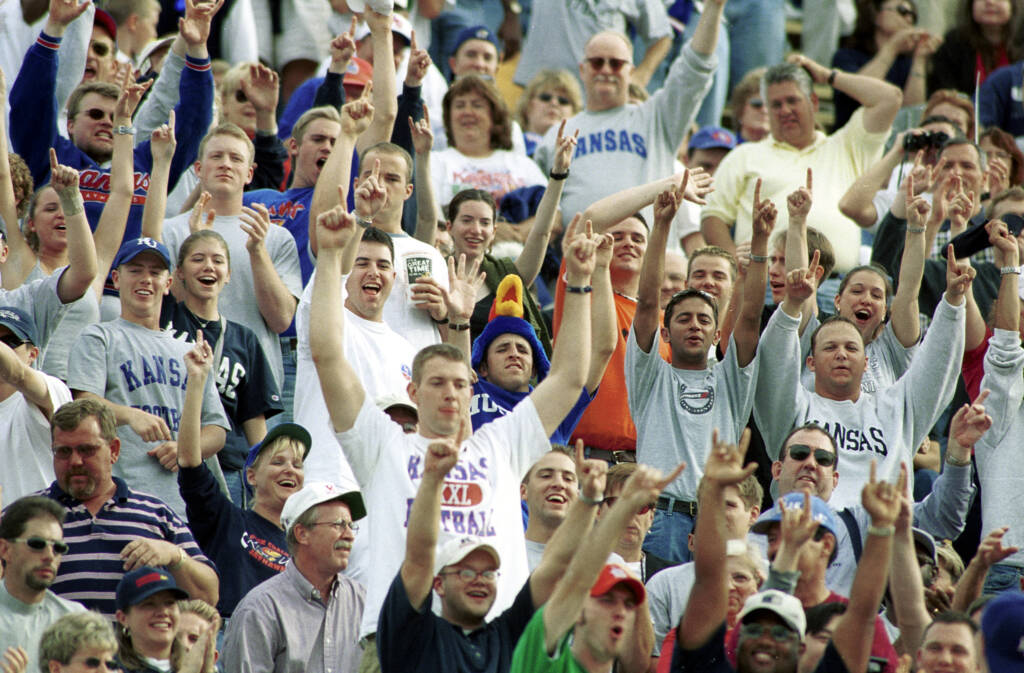 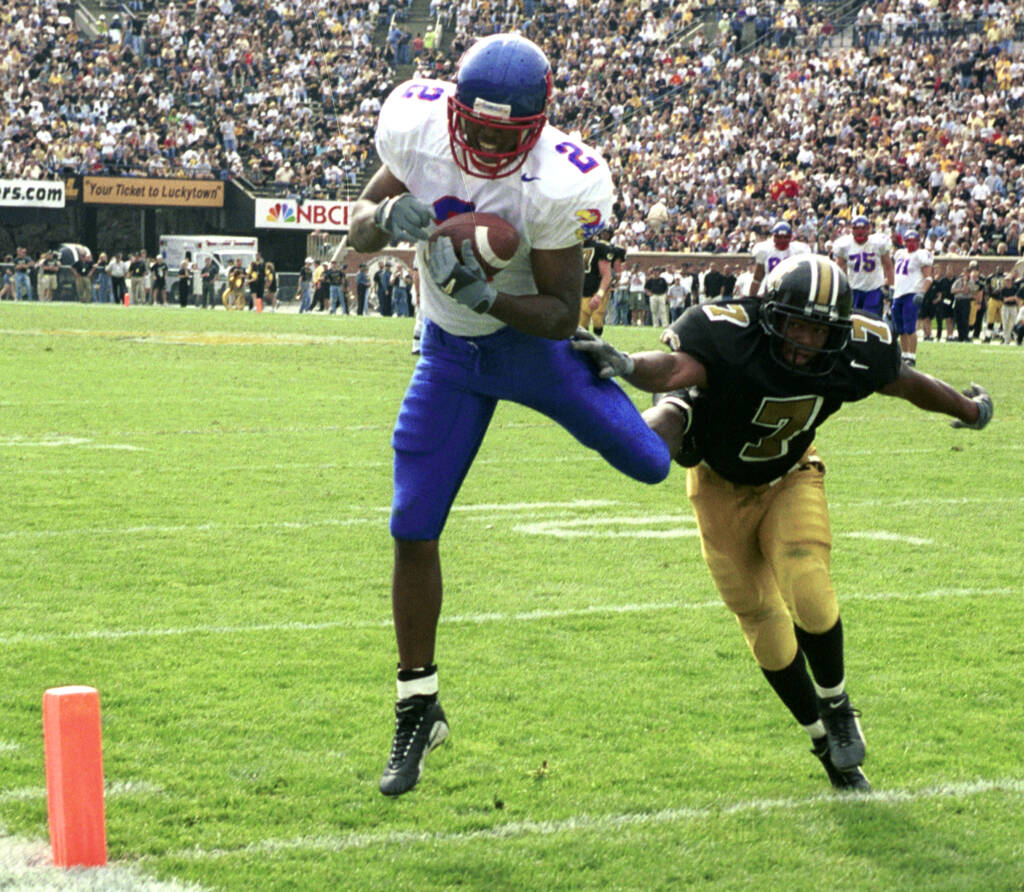 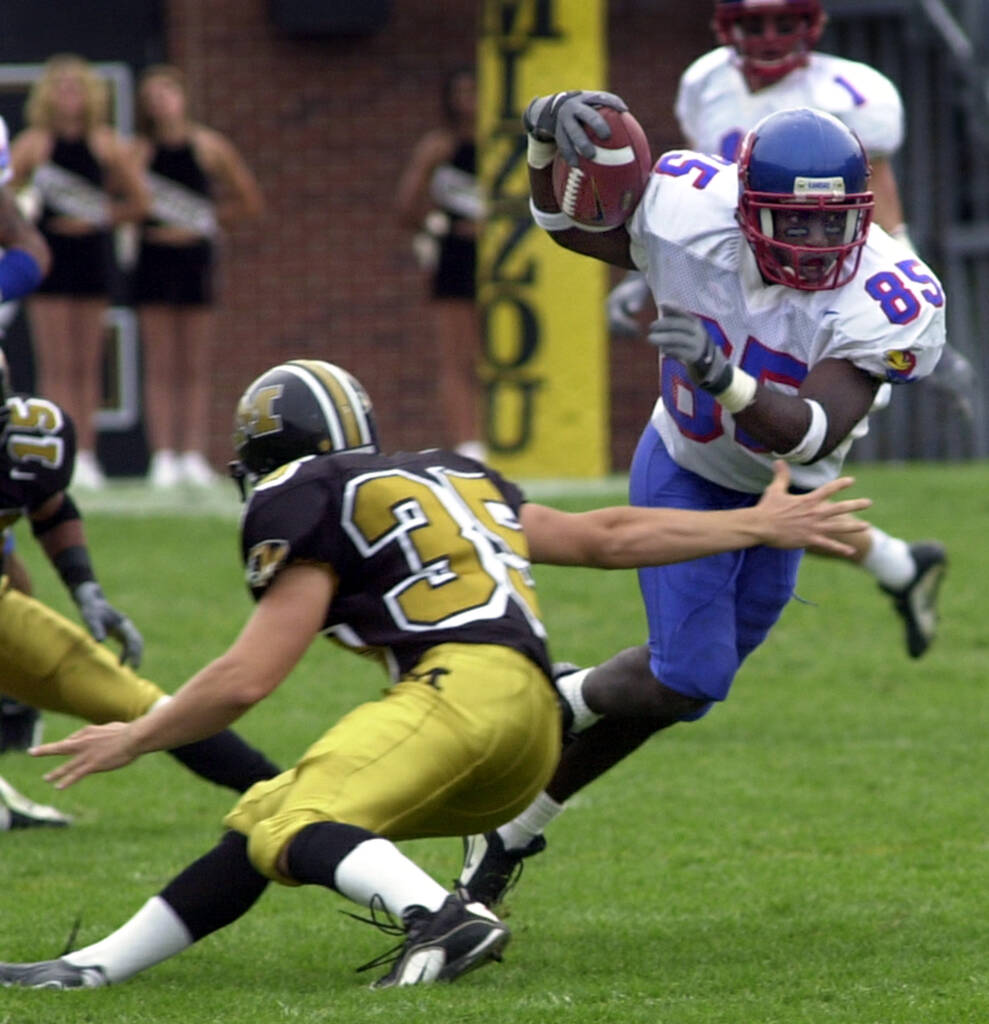 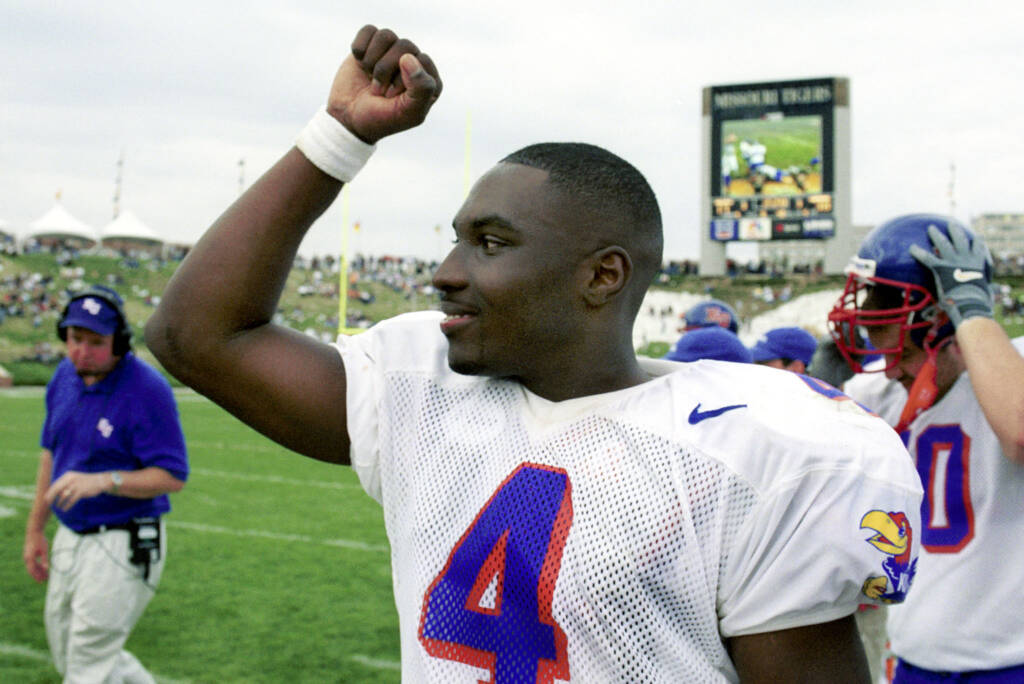 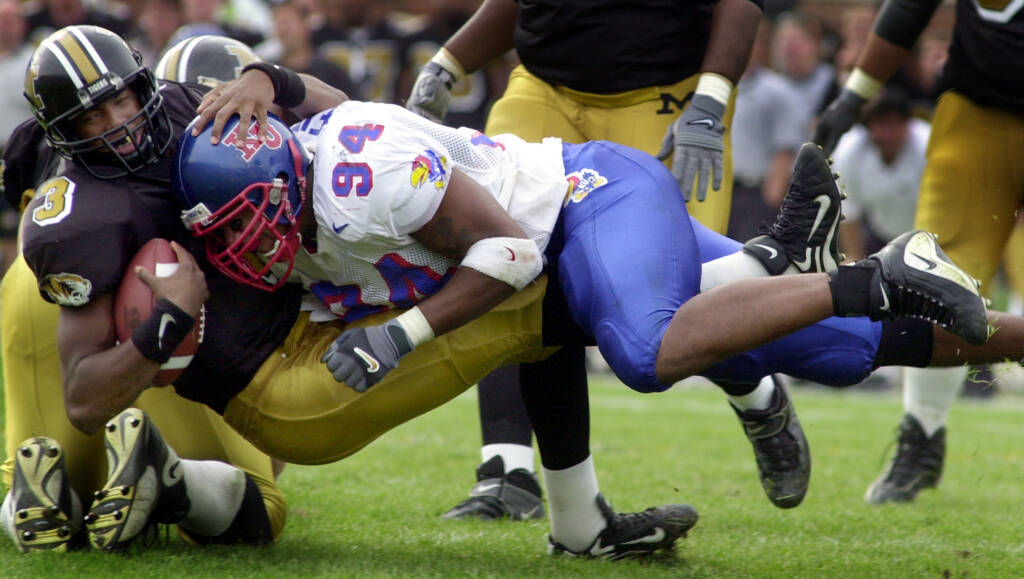 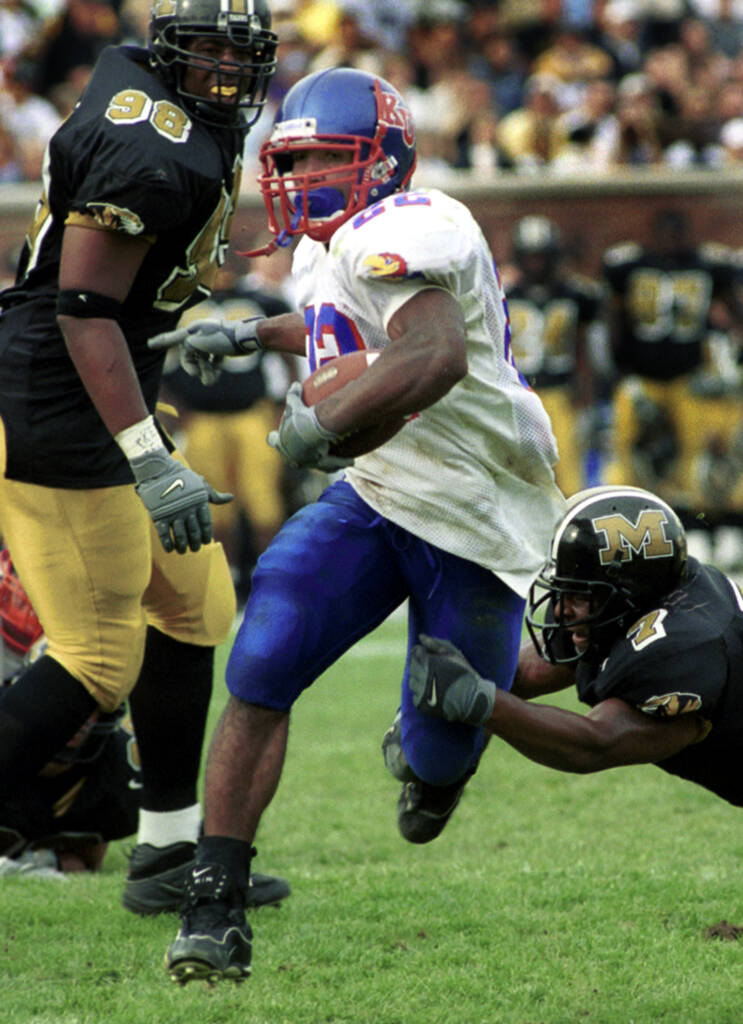 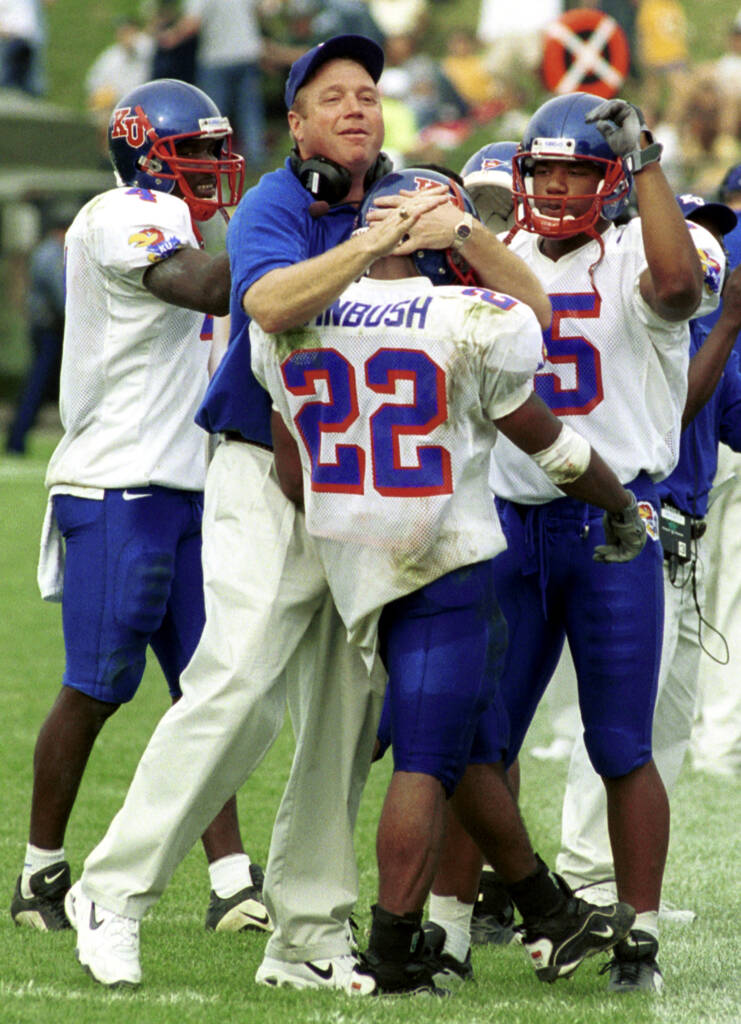 In my first year of work at KU, Allen asked me to help him with a recruiting idea. In 1997, the plan to dress recruits in KU football gear for a variety of photos was unique. Since I was working hourly at the time, I didn’t care how long it took to wait for all the players on given weekends to arrive and go through the process in the locker room. During that time, I came to know Allen and his coaching staff very well.

Once done, the film was processed, and a large poster image was printed by the Director of Facilities Darren Cook on a new printer bought for these projects. By late evening, crimson and blue light filled the locker room. The posters were displayed in lockers while the players made their day’s final visit to the locker room. The look proved dramatic.

So striking, in fact, I received a strange phone call at my Topeka home one Friday night from one of the recruits. I can still remember his words.

“If my parents left right now and drove to Lawrence, would they still be able to see my poster hanging in a locker on Saturday morning?”

It would be an eight to nine-hour drive from his Texas hometown for his folks, but I told him it could be arranged. I called Rob Bolks, the director of football operations for Allen. He happily told me the poster would be hanging in the morning for the highly-recruited player and his exhausted parents.

Such efforts soon led to complete access to KU football for me before, during, and after games. I met with parents to discuss reprints of their sons, which was wildly popular and within NCAA rules at the time. These opportunities opened many doors and allowed me to develop friendships and trust with players and other coaches during a time when staff photographers were nearly unheard of in college athletics.

I still believe I would not have been offered a full-time job as quickly, if not for Terry Allen. When Laura and I see our friend even today, I make sure to thank him.