Travis Goff: The Process of Hiring the Leader for Kansas Football

Twenty-five days after I became the director of athletics at Kansas, I picked up my phone to call Lance Leipold. It was early in the morning; the sun was out in Lawrence and it was building to be one of the hottest days of April.

Lance answered and I offered him the position to be the next head football coach at the University of Kansas.

You obviously know what happened next. He was all in.

At that exact moment, you’re probably thinking I was feeling elated and relieved. Our search was complete, and we landed one of the most accomplished and successful coaches in the country. We reached the culmination of weeks of hard work by our search committee and incredible support from Chancellor Girod.

We had our guy. Game over, right?

Once that call was made, we quickly assembled our football student-athletes together for an in-person meeting to announce our new head coach. We met in the indoor practice facility, I described the process, Coach Leipold’s credentials and why he was the right man to lead this program. Thanks to technology advancement of everyone during the pandemic, we were able to quickly setup a Zoom call with him so he could introduce himself to the team.  It was great for our student-athletes to hear directly from their new head coach just a few minutes after I let them know.

The final few days of a football search can be challenging and one of my priorities was to make sure we could inform our student-athletes before the hire became public; a challenge given social media these days. Our young men have been through a lot this year and it was important to us that they be notified before the hire was officially announced to the public. While there were rumors and speculation, I’m very thankful we were able to do so successfully that Friday morning.

After an exhaustive, thorough and ultimately successful search, only following that meeting did I fully exhale and feel a sense of calm and excitement. I knew right then and there that we had hired exactly the right guy for KU Football.

So, how did we get to that moment? How did our incredible search committee select Coach Leipold to be the new leader of our football program?

Let me take you through the entire process.

When I was hired, the first thing I really wanted to do was spend time with our football program; the coaches, the staff, the support staff, and of course the student-athletes. I wanted to be out at practice as much as possible, in order to observe the team, witness their level of commitment and “togetherness” and just get a pulse on their psyche given the challenging stretch they were in the midst of. What I saw was a group of dedicated young men who want to lead KU Football to new heights.

I arrived with no predetermined outcomes for this process and was focused on listening and really opening up the dialogue with our student-athletes. We gave each player on our football team an opportunity to submit a survey that prioritized the characteristics and attributes of their ideal leader. I had an open forum with leaders from the team to sit down and really talk about what this program needed in their new head coach.

The Clash of Dreams and Reality | Head Coach of the Leipold Family | Darrell Stuckey II: It’s a New Day in Lawrence | Inside the First 72 Hour with Kansas Football Head Coach Lance Leipold

I know many of our supporters were eager to understand my plans for football as soon as I arrived but I never felt pressure to act fast and hire a coach right away. I needed to take the necessary time to understand the dynamics of the program, what our resources and level of commitment was, where we’ve been and – most importantly – where we need to go. The only pressure I felt was to make sure I understood those dynamics before launching any search.

I also wanted to hear from passionate and committed Jayhawk supporters and donors, as well as our former football letterwinners. Those groups have continued to step up and support our football program and deserve a voice and an opportunity to provide feedback. I am so pleased with what I learned from them and, ultimately, what shined bright was their continued commitment and excitement for the future of KU Football.

The final step before the search officially began was to assemble a search committee. I needed to surround myself with strong leaders that knew the ins-and-outs of Kansas Athletics and our football program. A group that would challenge me and each other and who would put KU and our student-athletes’ best interests at the forefront. I am so thankful for those experienced and accomplished athletic administrators in Nicole Corcoran, David Reed and Mike Vollmar, in addition to one of the best football players in program history in Darrell Stuckey.

I felt great about that group then, and feel even better about them now that the search is complete. They rose to the challenge, worked exceptionally hard and made sure we remained committed to a professional and diligent search. Having Darrell on board gave me such confidence that our student-athletes were being represented by someone who really understands their experience and knows about the challenges they face. Many of our football student-athletes want to be Darrell Stuckey. They aspire to play in the NFL and represent KU in world-class manner.

With the help of our search partner, we created a list of outstanding candidates that truly fit KU’s needs, had proven track records of success, and were men of high integrity. We conducted multiple zoom interviews with a host of qualified candidates who were all passionate about leading a Kansas Football program with tremendous potential. In those early Zoom sessions, you are trying to understand their character, their general approach to leading a football program, and their plan for the University of Kansas.

From the start, Lance Leipold stood out. He is as real as they get and is full of substance. Instantly, you felt his steadiness, his confidence, his preparation and his passion for developing young men into champions in all aspects of their lives. 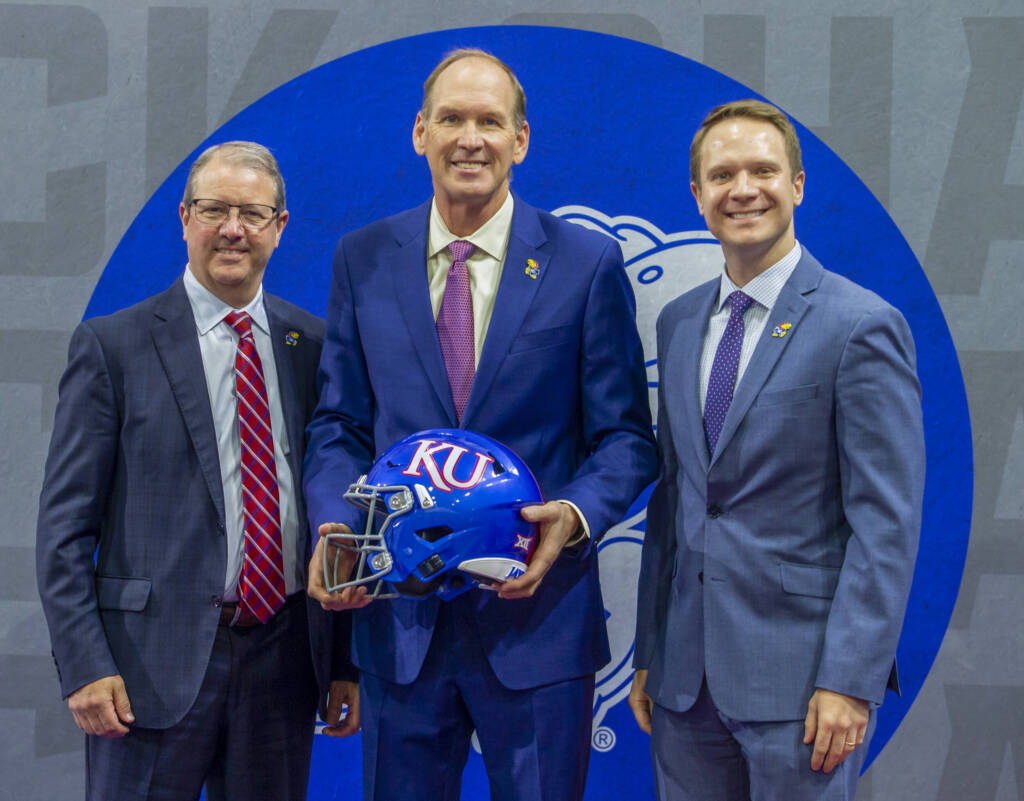 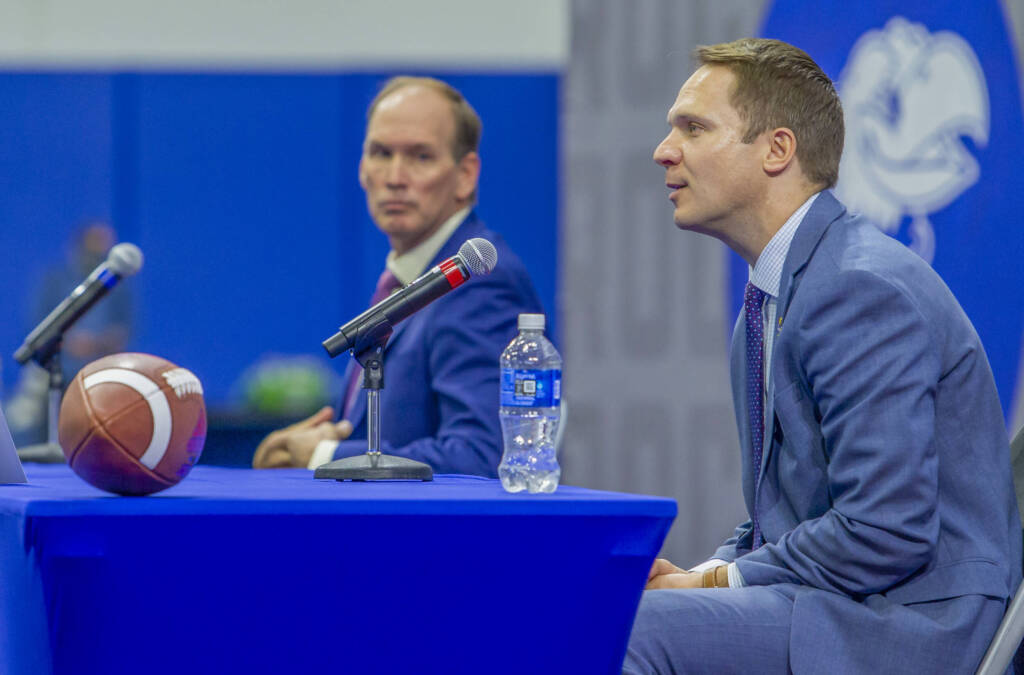 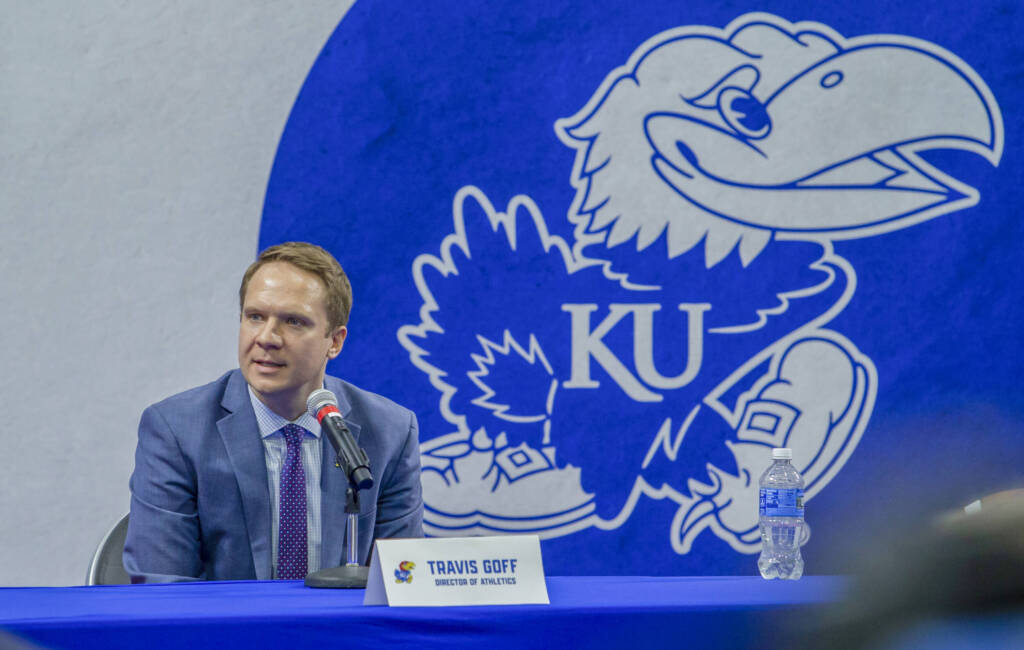 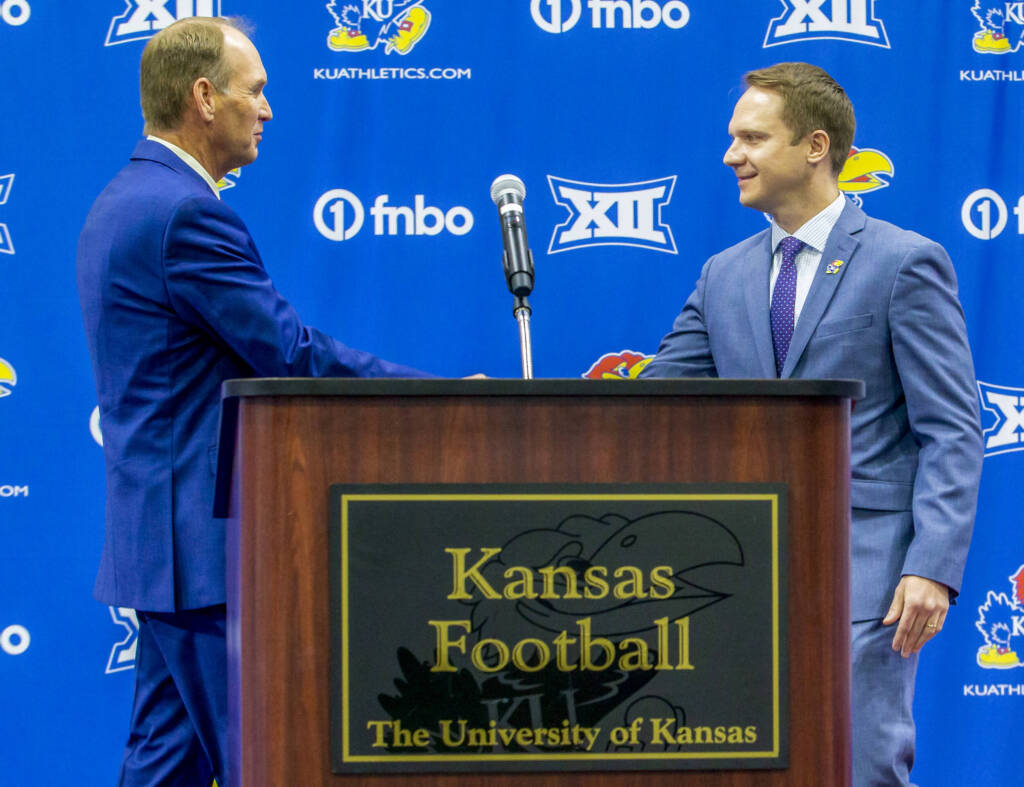 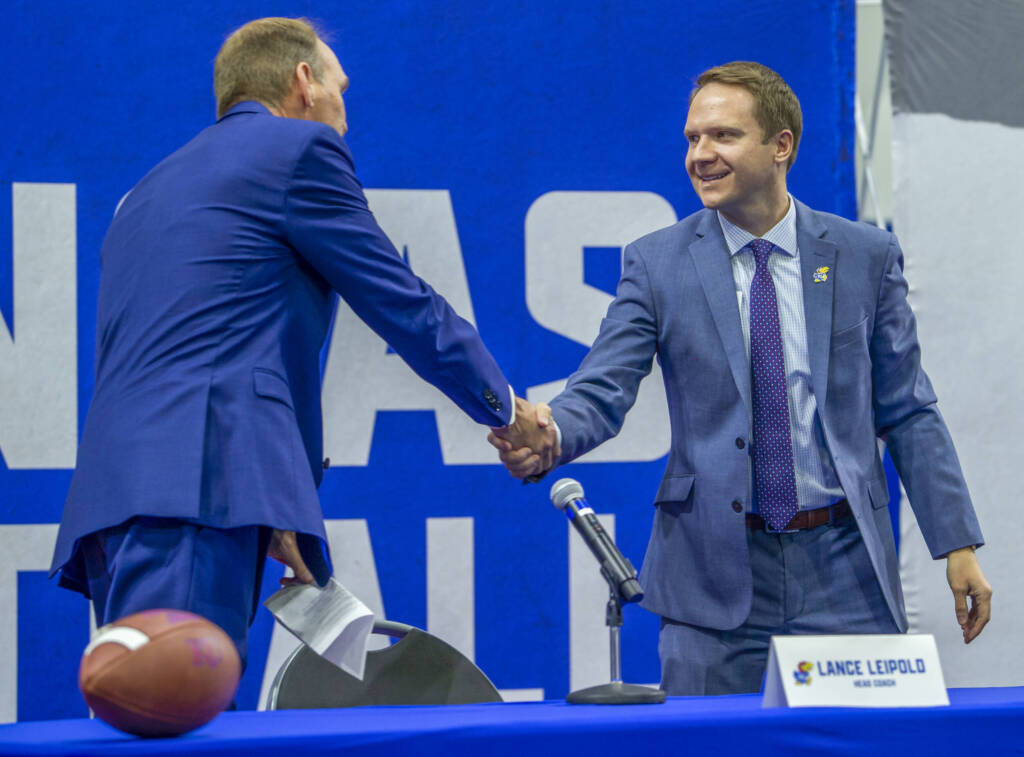 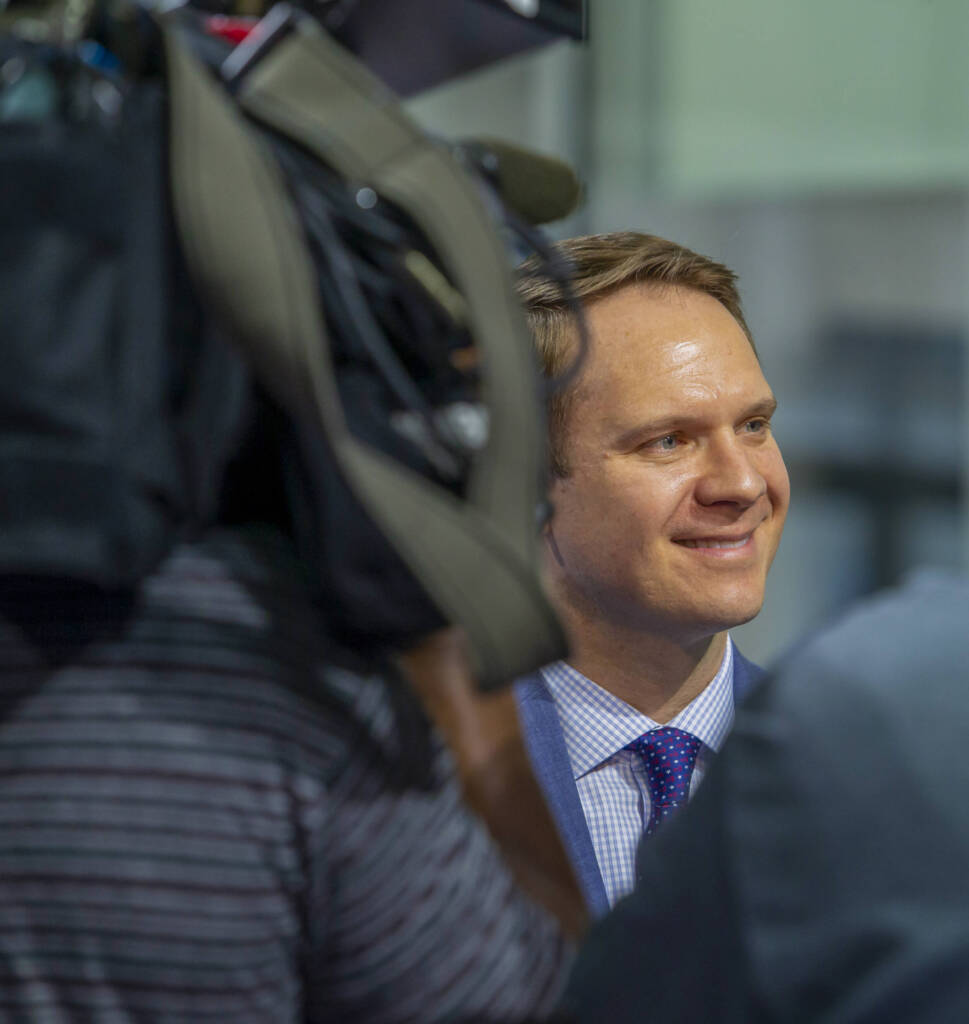 Lance did an amazing job of articulating ‘why Kansas?’ That was a critical question for us to ask and for candidates to clearly express. ‘Why KU? Why is this the right fit for Lance Leipold?’ He knocked that out of the park. He talked about embracing challenges and expressed great confidence that our football program could achieve the highest levels of success. And he described a special University, with a commitment to excellence, a wonderful community in Lawrence and a passionate alumni and fan base.

From the onset, there was a quiet confidence in Lance being a great fit here.

He’s not about coming in and making a splash. He doesn’t have a lot of catch phrases and slogans. The more time you have with him, the more that substance shines through. I think it continued to build over the course of the process. Without a question, he cemented himself as the perfect fit for Kansas.

This was the most important hire of my career but I’ve had the opportunity to be a part of many coaching searches at Northwestern and Tulane. A commitment to an inclusive, thorough and diligent search is the only way I know and I truly believe provides the best chance to find the right leader.

Typically, when you’re running a football search, you don’t have the luxury of a two or three-week window. The normal hiring cycle immediately after the season can force you to speed-up the process and make hasty decisions. And while many thought the timing of our search might put us at a disadvantage, I was confident it would in fact be a real asset. We were the only “Power 5” opening in the country and we had our candidates’ full attention.

I will never forget that warm Friday morning when it all officially came together. We informed our team. We announced it to the public, received great feedback from our fans and alumni, and then flew to Buffalo to pick up Coach Leipold, Kelly, Lindsey and Landon and bring them home to Lawrence.

We’re now approaching the two-week mark of the hire, and Coach Leipold has done an incredible job of hitting the ground running, getting to know our football student-athletes and assembling a top-notch staff.

Kansas Football’s best days are ahead and we could not be more excited to have you along for the ride. 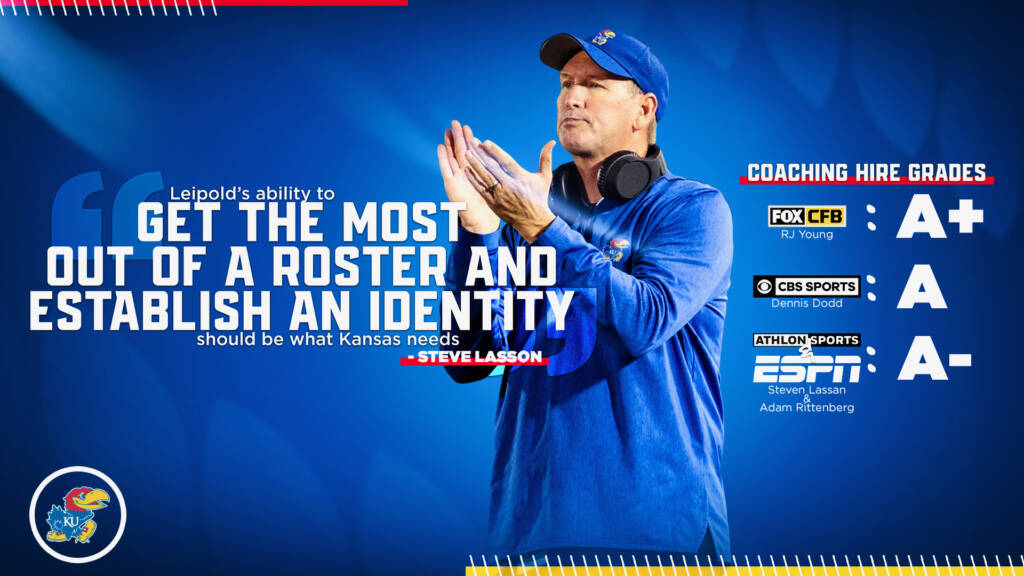