The task was simple. Keep the ball out of the back of the net for 90 minutes. Sophomore goalkeeper Sarah Peters did just that this past weekend as the Kansas women’s soccer team made history when it became the first in Kansas history to win the Big 12 tournament.

With the victory, this team has left an ever-lasting legacy behind, with Peters playing a significant role in creating that legacy.

Peters has been the driving force for the Kansas defense all season, recording nine shutouts and using her voice to be a leader for the defense.

It is honestly indescribable. This team has worked so hard and we put in a bunch of time in order to be where we are today. All of our hard work is really paying off and it is honestly surreal to me how we were able to win the first Big 12 tournament here at KU.

The experience was surreal for the Lee’s Summit, Missouri native, who was able to play with the chance to make history with her hometown cheering her on from the stands.

“It was really cool,” said Peters. “I had to scrounge a bunch of tickets from my teammates who were from out of town and my roommates. I had so many people come to watch and lots of different family come. I had some travel down from Iowa and a bunch of my friends were out there supporting me.”

Since her freshman year, Peters has been guarding the back of the net for the Jayhawks. While she had a very successful year last season, especially taking her rookie status into consideration, Peters has grown into a completely different keeper during the 2019 campaign.

For me personally, I think this season shows how much I have grown as a player since last year. I felt like I kind of had to go in and prove myself as a freshman and show people that I can play. It just means a lot for our team because last year we were upset about how we finished. This year, we came out ready to win more games. We are playing with confidence right now and what we are doing is pretty historical and amazing for this program. 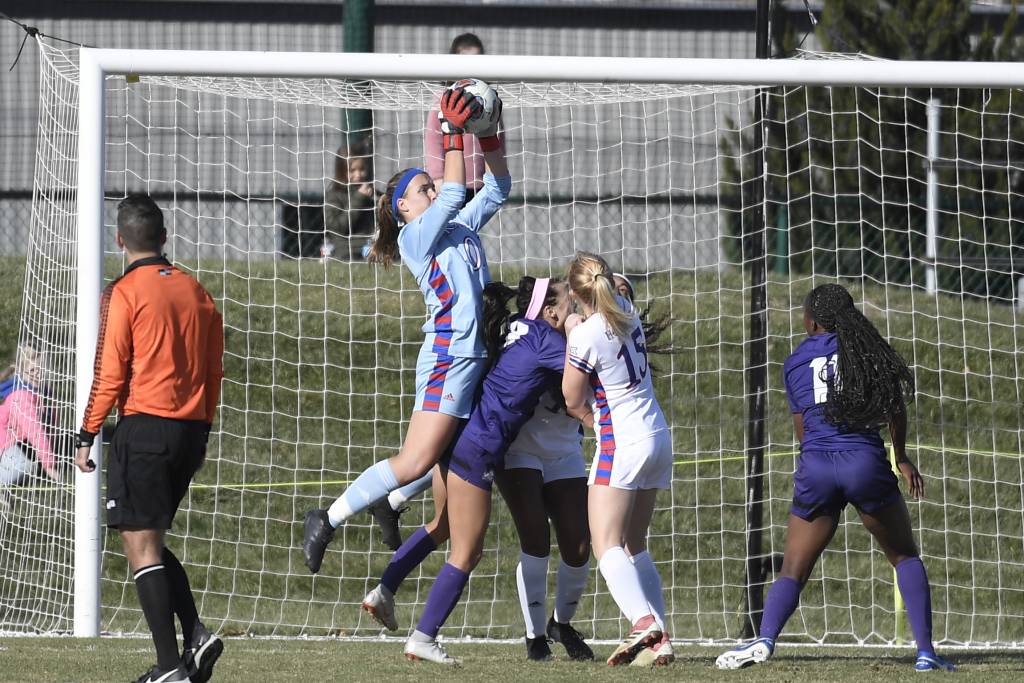 Historical, indeed. This past Sunday, this squad of Jayhawks became the first to ever walk away with the title in the Big 12 tournament.

The key to Peters’ success? The willingness to grow and learn more as a player and the immense trust that she and her coaches have in each other.

“I attribute most of my success to Coach Kelly Miller,” said Peters. “We have put in so many hours with me learning more as a player and trying to fix my technique. Coming in as a freshman, you are kind of all over the place. You really don’t know how you are going to adapt to college soccer and I came in wanting to play. Ultimately, I didn’t really know what I was doing. I didn’t know how to play at the level that I wanted to even though I was able to get through the season well last year. We really hammered down on my technique and my angle play as well as getting more fit in the weight room. I think it has shown on the field and I have been able to make a few more big saves that I wouldn’t have been able to last year. I kept some balls out of the back of the net that I probably wouldn’t have last year. I am excited to see where that progression goes from here because it doesn’t stop from here and it is just going to continue.”

Peters’ strength and poise in the goal gives her coaches and her teammates the confidence to go out and get the job done on the offensive end. The Jayhawks’ defense has been strong all season, and with each game, they continue to come together and form one unit.

The road to the title was not easy for Kansas, they were a five seed heading into the tournament and had let a couple of close conference games slip out of their grasp during the regular season.

The Jayhawks took down West Virginia in the first round of the tournament and had the odds stacked against them when they were set to take on the top seed in the conference.

It took two overtime periods for Kansas to down the No. 1 seed in the Oklahoma State Cowgirls, but they fought until the final minutes when they were able to get the winning goal to hit the back of the net.

The stage was then set for the title game. Kansas vs. TCU. The No. 5 seeded Jayhawks against the No. 6 seeded Horned Frogs.

It was a dogfight from the beginning, with both teams being evenly matched and the defensive squads keeping the ball around midfield for a majority of the first half.

We went into the locker room at halftime and knew that we had the momentum the entire first half. We wanted to get on the board and that is exactly what we did.

Kansas came right out of the intermission and struck first. It was looking as though the Jayhawks were going to run away from the Horned Frogs until TCU started to fight back. In the final five minutes of the match, TCU was relentlessly attacking the Kansas goal, putting up six shots.

The Jayhawks had faith in their keeper, and their unstoppable defense helped aid Peters in preventing the ball from hitting the back of the net. Peters’ mindset stayed strong and her defense held firm, giving Kansas a 1-0 victory and their first-ever Big 12 title.

Peters sang high praise for her defense and their skill set.

“Ultimately, all we had to do was keep the ball out of the back of the net,” said Peters. “Our defense really stepped up there. We had a lot of defenders come in and play minutes off the bench. Since the beginning of the season, our defense has grown substantially. We are able to be more focused and tuned in and I think what we did there at the end shows that. We were all so focused and we wanted to win so bad that we had to be dialed into the game. I was just trying to coach them and I think our center backs did really well just staying together as a unit.” 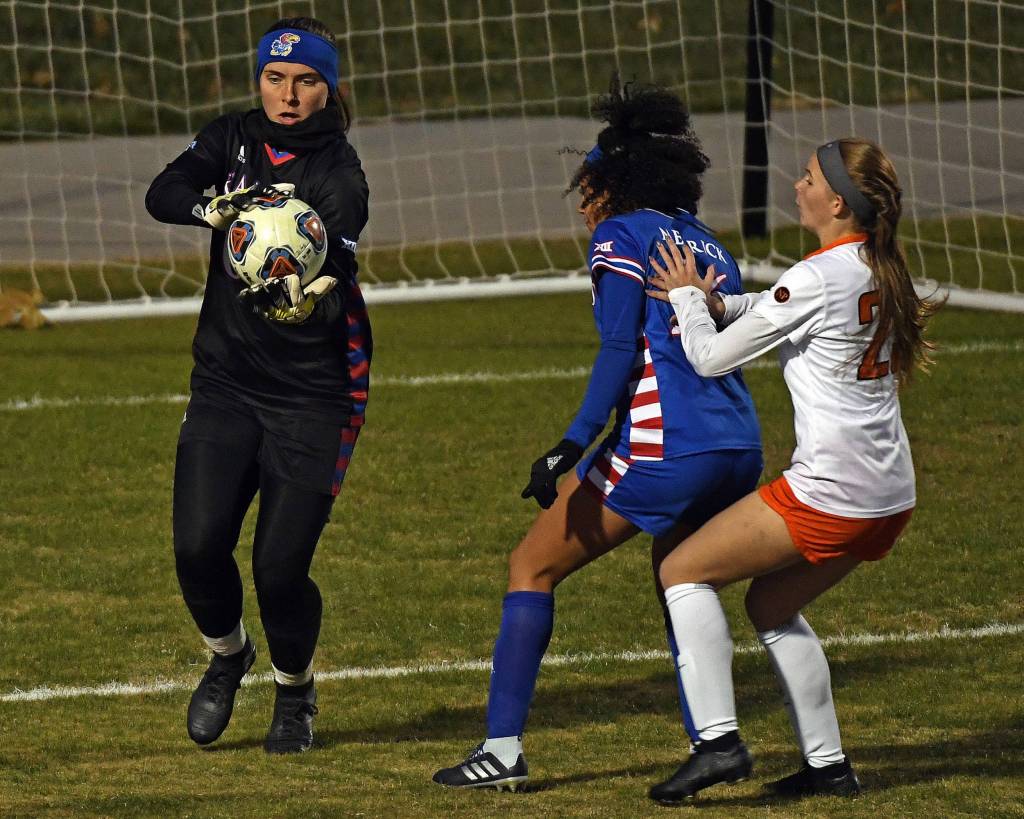 Peters is humble about her current success and currently sitting at No. 2 on the all-time shutouts list at Kansas, and refuses to take sole credit for all of her accomplishments.

“Stats are one thing, they are an extra benefit of winning games,” said Peters. “When you look at those stats, you just see a shutout, you don’t see what has gone on in the game. The defense does incredibly well with not allowing shots on goal and so I have to accredit a lot of my stats to my team for allowing this to happen for me.”

For Peters, seeing all of her hard work start to pay off in a big way is even more motivation to keep grinding throughout her next two years at Kansas.

“It is really exciting to know that I have two more years left to play,” said Peters. “I have put in so much work and I am incredibly proud of myself for what I have done already. I think the most exciting thing about the future is knowing that I still have a lot to look forward to.”

The Jayhawks will take their nine-match unbeaten streak back to Rock Chalk Park on Saturday, November 15, where they will begin the fight for their postseason lives against Iowa.

No matter how this season comes to an end, Peters looks forward to the future and is excited to discover even more potential for herself

“It would be really cool to keep winning the Big 12 tournament,” said Peters. “That feeling was unlike any other, I can’t even describe how it felt to be a Big 12 tournament champion. For the next two years, I want to continue to get more wins and more points out of the regular conference season. I want to continue to put my team in a position to be in the NCAA tournament. It is really exciting for our program and it is a step in the right direction for us. I am really excited to see what the future holds for me.”