After dropping the first set, the Jayhawks needed to respond in set two. KU was able to keep up with the Sun Devils in the set, tying it at 17-17. However, Arizona State clinched the set by recording five of the final six points to take a two-set advantage.

Down two sets, Kansas needed to find momentum to clinch the final three to secure a victory over the Sun Devils. Again the Jayhawks jumped out to an early lead, netting the first three points, but the Arizona State attack continued its efficient offense and pulled away late in the set. KU dropped the set and the match after the Sun Devils won the third set, 25-17.

Ashley Smith led the team with seven kills while Zoe Hill and Rachel Langs each finished with six kills. Senior Allie Nelson inched closer to 1,100 career digs, recording a team-high 10 in the contest.

Kansas faces tournament-host UNLV on Saturday, Sept. 21 at 2 p.m. to close out the Rebel Challenge and non-conference play.

S3 | Rachel BLOCK x ✌️‼️ Hickman and Langs team up for the block to tie the set!

S2 | Christon brings #KUvball back within one point after her second kill of the match.

S1 | Timeout Update: Back-and-forth match has Arizona State ahead at the second timeout of the set.

S1 | Langs with the 𝒌𝒊𝒍𝒍!! #KUvball with an early lead over ASU. 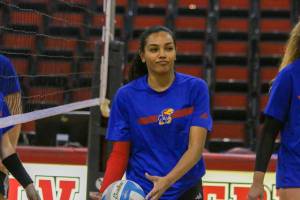 The senior currently leads the team in kills with 69 on the year. She also has a team-high 27 total blocks to her name through the team’s first eight games. 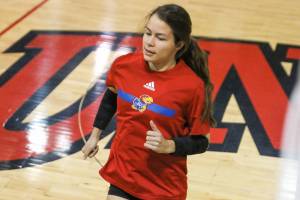 Kansas enters the Rebel Challenge with a 4-4 record, including a 1-2 record in the Kansas Invitational. The Jayhawks tallied a three-set sweep of Morehead State in their home opener. KU has victories over Kansas City, Omaha, Albany and Morehead State.