LAWRENCE, Kan. – On the brink of the 2020 spring season, Kansas women’s tennis comes in at No. 19 in the first Oracle/ITA Team ranking of the year, the Intercollegiate Tennis Association (ITA) released Wednesday. The Jayhawks are one of three teams from the Big 12 Conference in the Oracle/ITA top-25 joining Texas at No. 7 and Oklahoma State at No. 11. 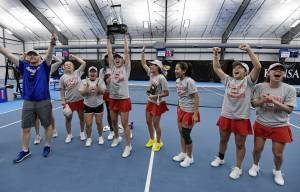 The ITA’s top-five includes No. 1 Stanford, which claimed eight first-place votes and No. 2 North Carolina collected three. Georgia received one first-place vote and tied for second with the Tar Heels. UCLA and Duke placed fourth and fifth, respectively.

Predicted to finish atop the Big 12 league standings was Texas, which garnered six first-place votes. Oklahoma State nabbed three votes while Baylor picked up one to make up the top three positions. Oklahoma placed above KU, ranking fourth in the poll.

The Jayhawks begin the 2020 spring season with three players ranked in the ITA singles and doubles ranks. Kansas sophomore Smagina was individually ranked at No. 63 while fellow second-year player Ngounoue came in at No. 93. In doubles, Smagina and freshman Roxana Manu were seeded No. 42.

Under the helm of seventh-year head coach and 2019 Big 12 Coach of the Year, Todd Chapman, the Jayhawks begin league action March 13 as they host Oklahoma at the Jayhawk Tennis Center.

Kansas’ spring slate opens on the road in Orlando as a part of the Orlando Invitational, Jan. 10-12.