Mark Your Calendar, Late Night in the Phog Set for Oct. 1

“One thing about last year’s pandemic was it took away from fans being able to attend events but it also took away some fun opportunities for us too,” KU men’s basketball coach Bill Self said. “We probably tip off the season as well as anybody in America with Late Night in the Phog and we are glad it will be back. It will be the first chance for our fans to see the large number of newcomers that we feel is a terrific recruiting class.”

Due to the worldwide pandemic, the 36th Late Night in the Phog was virtual but Allen Fieldhouse will return to hosting the 2021 event in person. Late Night started in 1985 and features music by the KU pep band, routines from KU’s spirit squad and dance teams, skits by both men’s and women’s basketball teams, video highlights from KU’s award-winning Rock Chalk Video department, coach and player introductions, scrimmages and much more.

“We could not be more excited for the return of Late Night in the Phog,” KU women’s basketball coach Brandon Schneider said. “This annual kick off for the basketball season is something our players greatly look forward to participating in. We can’t wait to see Allen Fieldhouse back to full capacity.”

Late Night in the Phog at the University of Kansas continues to be one of the most well-attended ‘midnight madness’ events in all of college basketball. Each year, more than 16,000 fans pack into Allen Fieldhouse to catch an off-beat look at the Jayhawks to get a sneak peek at the highly-touted newcomers. But it hasn’t always been the highly anticipated event that it is today. 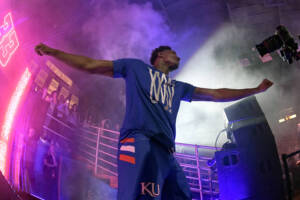 By all accounts, it began as an afterthought. Just 6,000 fans, mostly students, gathered in Allen Fieldhouse at 12:01 a.m. on an October Tuesday in 1985 for the inaugural “Late Night with Larry Brown.”

At that time, Bill Self was a young KU graduate assistant in the early stages of molding his career in coaching. Danny Manning was a promising forward primed to take the Big Eight Conference by storm. Brown was in the process of building the team that would make it to the Final Four in Dallas that March, eventually winning the national championship two years later under the moniker ‘Danny and the Miracles.’

Little did Brown know that in the 37 years after his brainchild barely registered a blip on the radar, Late Night in the Phog would become a cornerstone of one of the most successful and fanatically-followed basketball programs in the nation.

Unlike most midnight madness-type events, Late Night is highlighted by skits, lip-syncs and dance routines performed by the players themselves. Over the years, the crowds, all capacity gatherings since 1991, have witnessed hundreds of performances and ferocious dunks as Kansas prepared for its first official practice of the season.

Since 1988-89, the Jayhawk women’s basketball team has taken on a greater share of the Late Night load and shares center court with the KU men’s team. 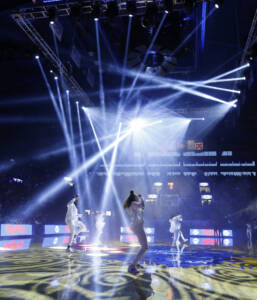 The pep band, cheerleaders, dance team and mascots are also involved in the pre-scrimmage entertainment.

Prior to the 2005-06 season, the NCAA decided to change the season-opening scrimmage time from midnight to earlier in the evening to create a more fan-friendly experience. Now fans of all ages can watch the festivities — Late Night isn’t so late anymore.

For the players who act, dance and take part in a light scrimmage in front of 16,300 fans, the light-hearted event is the ideal way to kick off the season and the beginning of official practices. But before the teams get down to business, Late Night in the Phog gives fans a preseason glimpse of the program. Recruits gather from across the country. Former players and coaches return home to their college basketball roots. Fans enjoy a sneak peek into the personalities of the players they will support throughout the season.