LAWRENCE, Kan. – For the first time ever, ESPN College GameDay will emanate from David Booth Kansas Memorial Stadium on Saturday, October 8, as No. 19 Kansas hosts No. 17 TCU in a battle of unbeatens. The 5-0 Jayhawks will meet the 4-0 Horned Frogs at 11 a.m. CT, with a nationally-televised broadcast on FS1.

The game was chosen to be the host site of College GameDay after each team enters the second week of October ranked and unbeaten. Kansas is 5-0 on the year and 2-0 in Big 12 play after defeating Iowa State, 14-11, on Oct. 1 in Lawrence, while TCU improved to 4-0 with a 55-24 victory over No. 18 Oklahoma last Saturday in Fort Worth.

Saturday’s matchup will be the 39th all-time meeting between Kansas and TCU on the gridiron, in a series dating back to 1942. The Horned Frogs have been a member of the Big 12 Conference since 2012 and the two teams have met in each season since. TCU leads the all-time series 25-9-4, with KU’s last victory coming on October 27, 2018 in Lawrence.

"If you’re going to be a good football, you have to find a way. We found a way (Saturday). It wasn’t stellar or glitzy or glamorous, but you can have games like this. We get caught up sometimes in those things because you really start looking at the defensive performance, and we should be really excited. So, we’ll get back to work."

Nationally Ranked – AP Poll | Coaches Poll
The Kansas Jayhawks are ranked No. 19 in the Associated Press Top-25 College Football Poll, which was announced Sunday. This is Kansas’ first ranking in the poll since Oct. 24, 2009, snapping the longest unranked drought among Power 5 schools.

The Kansas Jayhawks have also made an appearance in the USA TODAY AFCA Coaches Poll at No. 17, which was announced by the organization Sunday. It marks Kansas’ first ranking in the coaches poll since Oct. 18, 2009 (No. 21).

For the first time since 2009, @KU_Football has entered the USA Today Sports AFCA Coaches Poll. The Jayhawks come in at No. 17 in this week’s poll.https://t.co/clj6BPOgAp

College GameDay – full release
ESPN’s College GameDay Built by The Home Depot is college football’s premier pre-game show. Entering its 36th season, the show travels to a different college campus or game site each week of the season from early September through the College Football Playoff National Championship in January. The locations – usually announced a week in advance – are chosen by ESPN based on competitive matchups, rivalries and other factors.

Quotable #2
“Let’s make this the best College Gameday ever Jayhawks! Incredible opportunity to shine a light on this team, our campus and the Lawrence community. Rock Chalk!” – Jason Booker, Deputy Athletic Director

Hishaw got Kansas on the scoreboard first with a four-yard touchdown run with 11:30 to play in the first half to make the score 7-0 in favor of the home team. The score capped a seven-play, 79-yard drive that took 3:59 off the clock. Hishaw rushed for 18 yards on the drive, while sophomore running back Devin Neal took a Daniels pitch and raced 30 yards earlier in the drive setting up Hishaw’s score, his fifth of the season. Hishaw finished with 28 yards on eight carries and the score. Neal rushed for 75 yards on 12 carries to lead all rushers. Daniels was 7-of-14 in the air for 90 yards.

Kansas took advantage of a short field when sophomore Cobee Bryant recorded his second interception of the season at the Iowa State 19-yard line with 7:25 before intermission. Four plays later Daniels scored his fifth touchdown of the season with a two-yard rush off the left tackle to put Kansas up 14-0 with 5:25 before halftime.

Iowa State field goal kicker Jace Gilbert missed three field goals for the game including a 37-yarder that went wide left with 32 seconds remaining that would have tied the contest.

Sold Out
For the second consecutive weekend, Kansas Athletics announced a sellout crowd of 47,233 at David Booth Kansas Memorial Stadium for the Homecoming victory over Iowa State. Prior to this season, KU had not had a home sellout since 2019 and the consecutive sellouts are the first time since 2009. It was the 17th sellout for Kansas since 2000, with the Jayhawks holding an 11-6 record in those games.

Game Preview
Ranked in the AP Top 25 for the first time since 2009, the No. 19 Kansas Jayhawks will host the No. 17 TCU Horned Frogs on Saturday, October 8 at 11 a.m. CT at David Booth Kansas Memorial Stadium. The game will be broadcast by FS1 with Jason Benetti (Play-by-Play) Brock Huard (Analyst) and Allison Williams (Sideline) on the call.

Saturday’s Big 12 Conference matchup will be the first game in Lawrence to feature two Top 20 teams since Oct. 25, 2008, when No. 19 Kansas hosted No. 8 Texas Tech. With two top-25 teams in Lawrence, ESPN’s College GameDay will be on hand to broadcast its show from the Kansas campus for the first time in the show’s history.

TCU comes to Lawrence after defeating Oklahoma, 55-24 in Fort Worth on Oct. 1. The Horned Frogs have now scored 50+ points in two games this season, while averaging 549.5 yards per game, the second most in the country this season. The Horned Frogs are led by quarterback Max Duggan (70/94, 997 yards, 11 TD) and running back Kendre Miller (51 rushes, 388 yards, 5 TD). 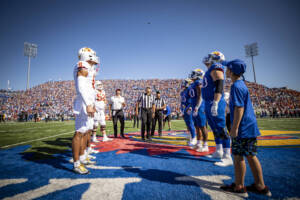 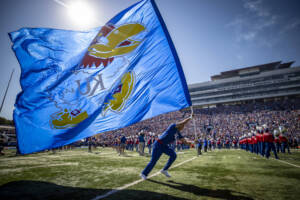 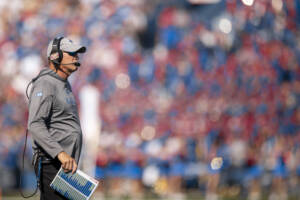 America’s Team
As Senior Columnist Stewart Mandel of The Athletic wrapped up another hectic Saturday of college football, he did so by heaping praise on the Kansas Jayhawks, who he dubbed as ‘America’s Team.’

Kansas got to 4-0 with a light-up-the-scoreboard offense, but Lance Leipold’s club got to 5-0 by winning a hard-fought, 14-11 defensive struggle against Iowa State. Matt Campbell’s team held Jayhawks star Jalon Daniels to 102 total yards, but it turns out KU has defenders too, like cornerback Cobee Bryant, whose acrobatic interception set up Kansas’ second touchdown, and sixth-year tackle Sam Burt, who was in on two sacks and several other pressures.

Jayhawks fans went running onto the field for a second week in a row. Rest up, kids. You’ve got GameDay coming to town for next week’s TCU game, with a chance to get bowl-eligible for the first time in 14 years and half a season still ahead.

Did You Know?
The Kansas defense is coming off its best performance of the season against Iowa State. The Jayhawks held ISU to just 26 rushing yards, which is the lowest output by a Jayhawk opponent since UTEP was limited to four yards on September 19, 2009. The 11 points allowed was the fewest allowed against a conference opponent since KU topped Iowa State 45-7 on November 17, 2007.

Big Noon Kickoff
Tom Rinaldi paid a visit to Lawrence last week to learn more about the identity formed by Kansas during the 4-0 start to the season for Fox’s Big Noon Kickoff. His story included interviews with Athletic Director Travis Goff, coach Lance Leipold, quarterback Jalon Daniels, running back Devin Neal, sideline reporter Brandon McAnderson and KU fans. The feature aired on Saturday morning prior to KU’s victory over Iowa State and can be seen below.

“It was a program that didn’t have an identity and that’s what Lance and his staff has provided from the second they showed up.”

Featured on Gameday
Gene Wojciechowski from ESPN’s College GameDay made a trip to Lawrence in advance of KU’s matchup with Iowa State. While in town, he visited campus and some local spots to talk with fans before talking with head coach Lance Leipold, Strength & Conditioning Coach Matt Gildersleeve and safety Kenny Logan, Jr., to talk about KU’s then- 4-0 start to the season. Wojciechowski wrapped up his visit by attending Hawk Talk with Leipold. View the full feature, which aired on Saturday morning, below.

THE story of the college football season.

Quotable #4
“All real. All substance. Has this connection to his roots, small-town Wisconsin, that keeps him grounded. Keeps him present. I don’t know that everybody has those attributes, frankly. Let’s face it. Not everybody does. His attention to detail and his day-to-day commitment to improvement and development, it’s happening differently right now in this program.” – Travis Goff, Athletic Director, to On3

Get Your Tickets
With three home games remaining on the 2022 schedule, Kansas Athletics has announced a KU Football mini plan, which includes games against TCU, Oklahoma State and Texas. Fans can get a ticket to each of the final three games in the mini plan, with prices beginning at $155. For more information about purchasing the mini plan, click here, or purchase single game tickets here.

Up Next
Big 12 play continues with Kansas on the road next Saturday, October 15, as the Jayhawks head to Norman, Okla., to face the Oklahoma Sooners. Kickoff of that contest is set for 11 a.m. CT, and it will be televised by either ABC or ESPN2.

A @KU_Football Mini Plan is now available for the remaining 3 home games this season, starting at just $155.