KANSAS CITY, Mo. – Eva Eliasdottir’s golden goal in the final minute of double overtime propelled the No. 21 Kansas Jayhawks past the No. 10 Oklahoma State Cowgirls, 2-1, Friday night in the Big 12 Championship semifinal at Swope Soccer Village. With the victory, KU advanced to the championship match for the second time in program history, where the No. 5-seeded Jayhawks will meet No. 6 seed TCU on Sunday, Nov. 10 at 12:30 p.m.

The win moved Kansas to 14-4-3 on the year and extended its unbeaten streak to eight games, tying a program best. The league’s regular-season champion and top-seeded Oklahoma State suffered its first loss in nine matches and fell to 15-2-3 in its 2019 campaign.

It was a less than ideal start for the Jayhawks, who conceded the match’s opening goal just 65 seconds after the opening kick. OSU junior Gabriella Coleman got in behind the KU defense and shot in her eighth of the season to give her team the early 1-0 lead. The goal marked the earliest in Big 12 Championship history.

Kansas rebounded and rebounded quickly, however, as KU’s Samantha Barnett leveled the score less than six minutes later. Senior forward Katie McClure found her sophomore teammate inside the OSU box, where Barnett used one touch with her left boot to redirect the ball into the upper netting. The goal was Barrett’s second of her KU career.

From there it was a back-and-forth affair that saw both teams create numerous chances over the next 80 minutes of regulation. The Cowgirls managed 19 shots in regulation and put six of those tries on frame, but the KU defense and sophomore goalkeeper Sarah Peters remained airtight.

With the score still deadlocked at 1-1 after 90 minutes, Kansas found itself in the fifth overtime match in the Jayhawks’ last eight outings. The Cowgirls nearly brought the match to an immediate halt with a shot that look destined for the back of the net, but Peters was there for a diving stop, her eighth of the night, to extend the match.

Two minutes after Peters’ game-saving play, a foul 30 yards from the Cowgirl goal gave the Jayhawks a free kick. Ceri Holland sent in a curling service that Isabella Cavalcante got on the end of and headed toward the right post of the OSU frame. From there, Eliasdottir took over and redirected the ball into the back of the net to bring the match to an immediate end with just 60 seconds before the end of the second overtime.

The goal, Eliasdottir’s first of the season and third of her career, moved the Jayhawks to their first Big 12 Championship match since 2015. It also gave KU its first win over a top-10 team since 2017.

UP NEXT
The Jayhawks will meet the No. 6 seed TCU Horned Frogs in the Big 12 Championship final set for Sunday, Nov. 10 at 12:30 p.m. at Swope Soccer Village in Kansas City. The match will be televised on FS1 with Brenda Vanlengen (play-by-play) and Jessica Stamp (analyst) calling the action. 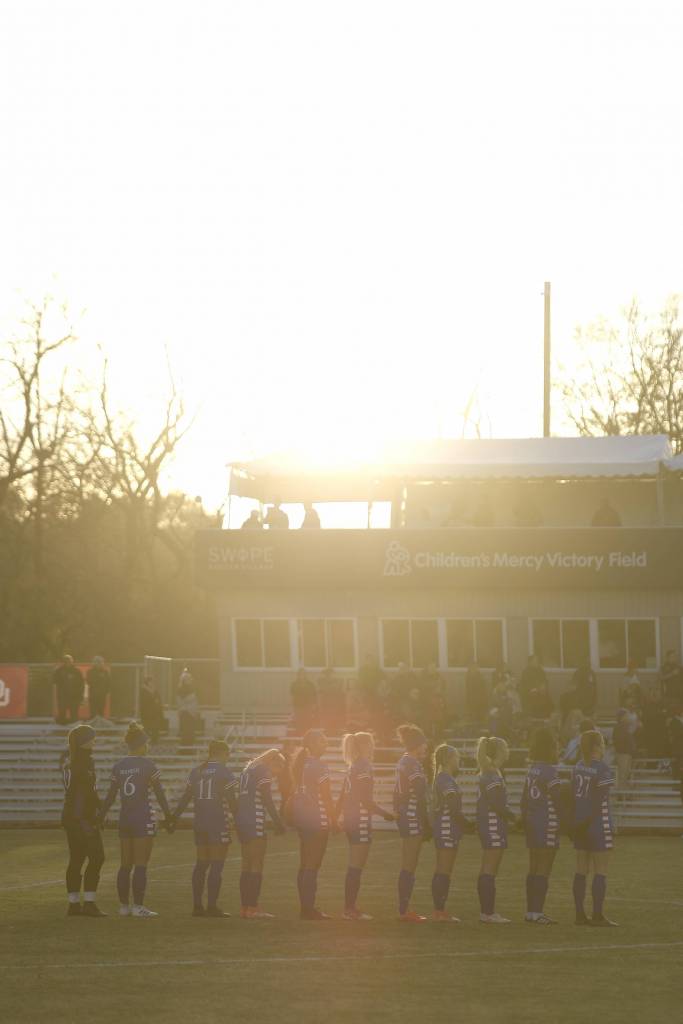 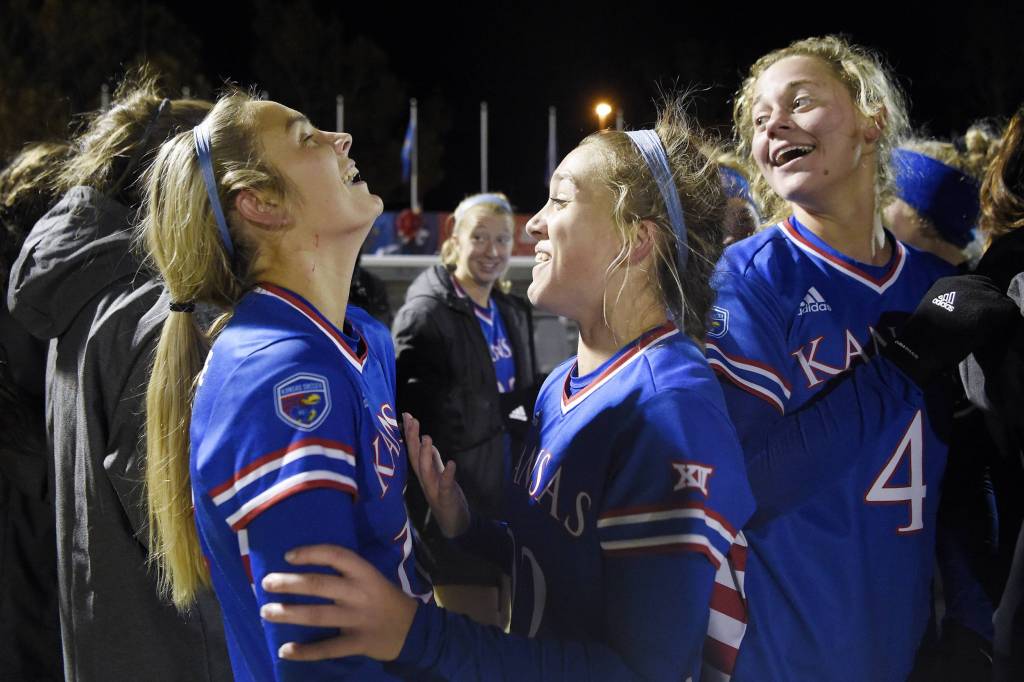 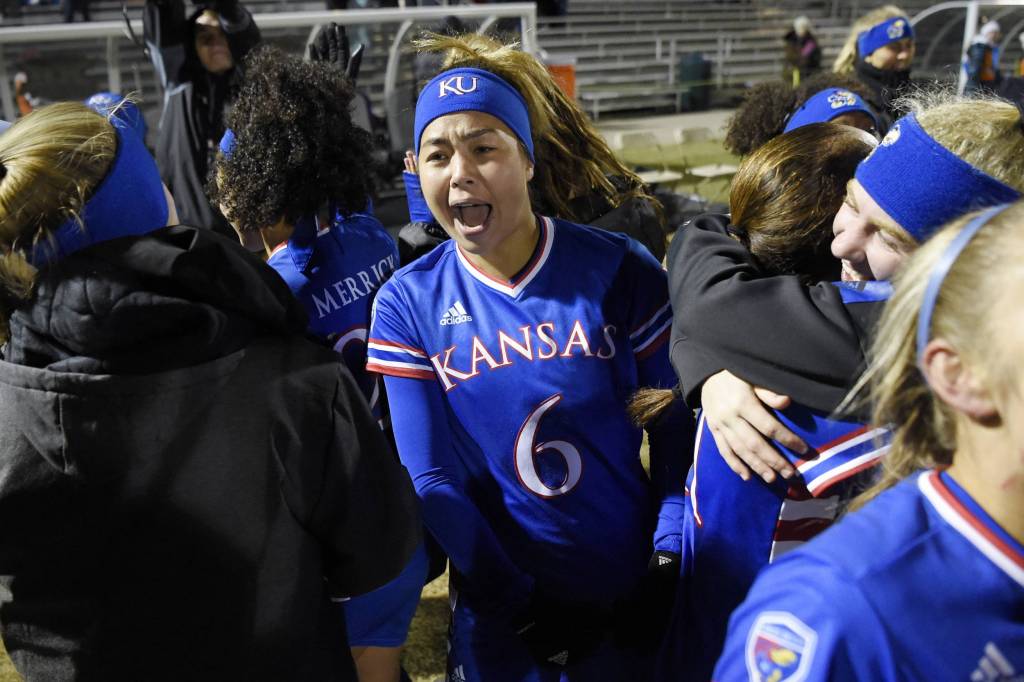 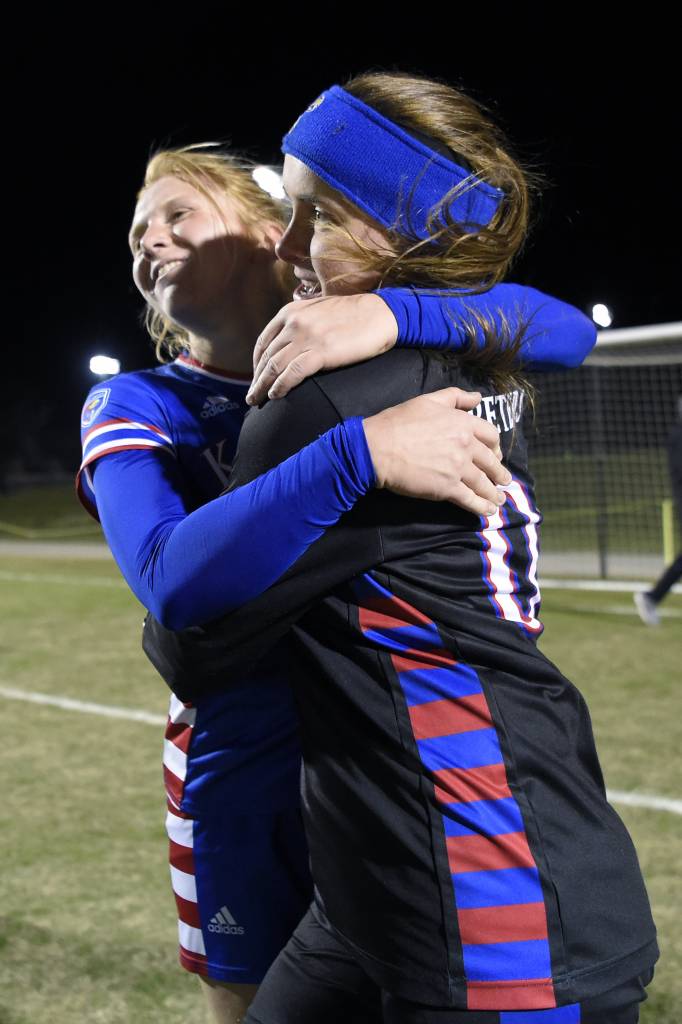 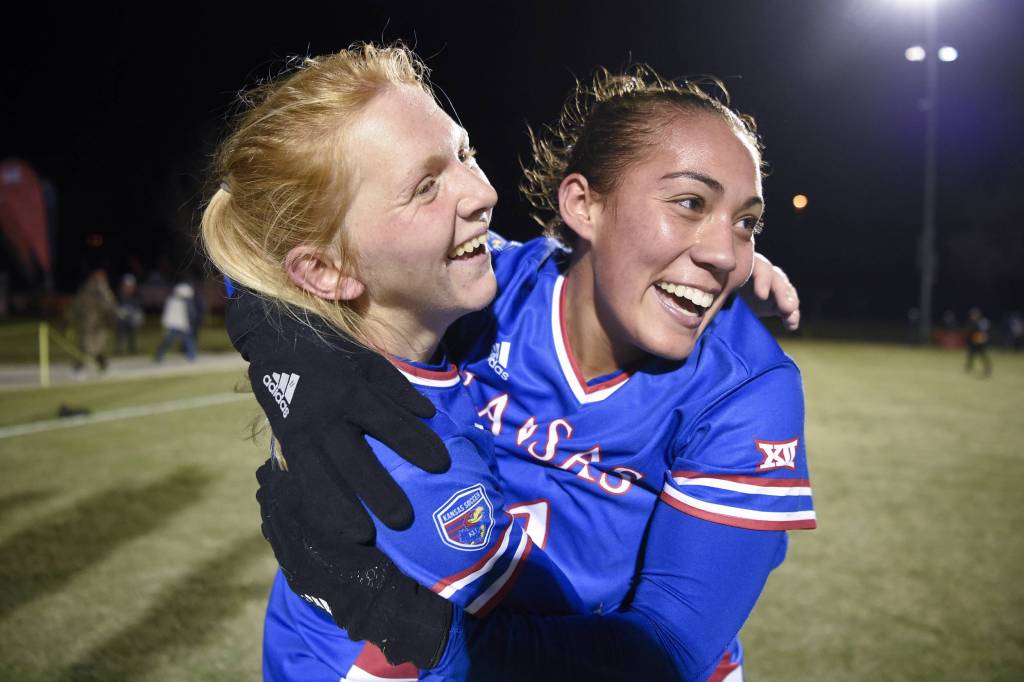 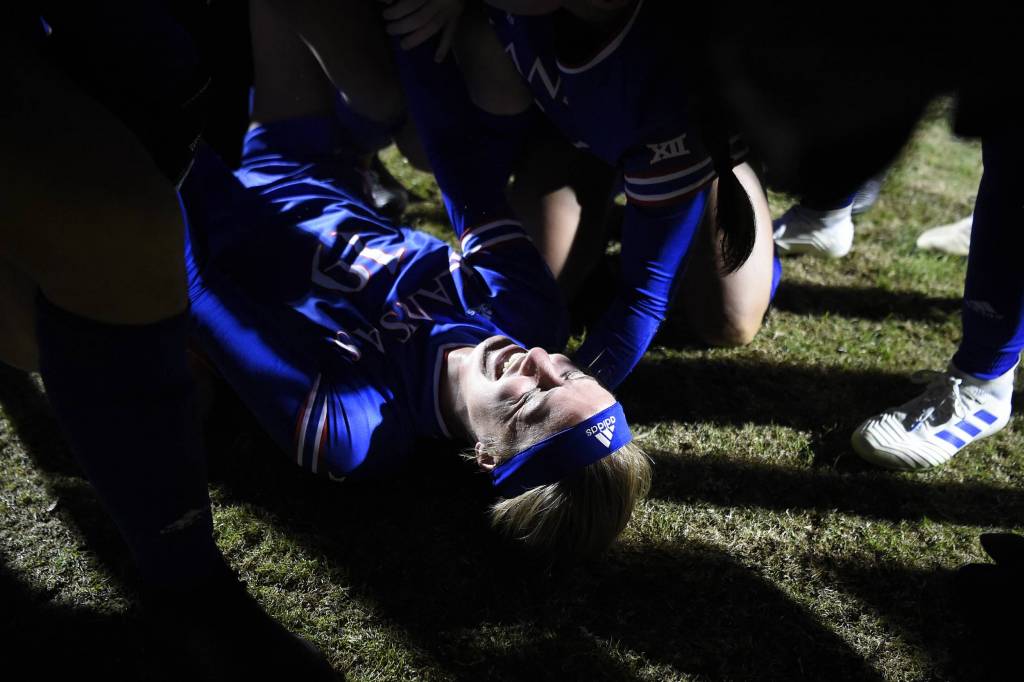 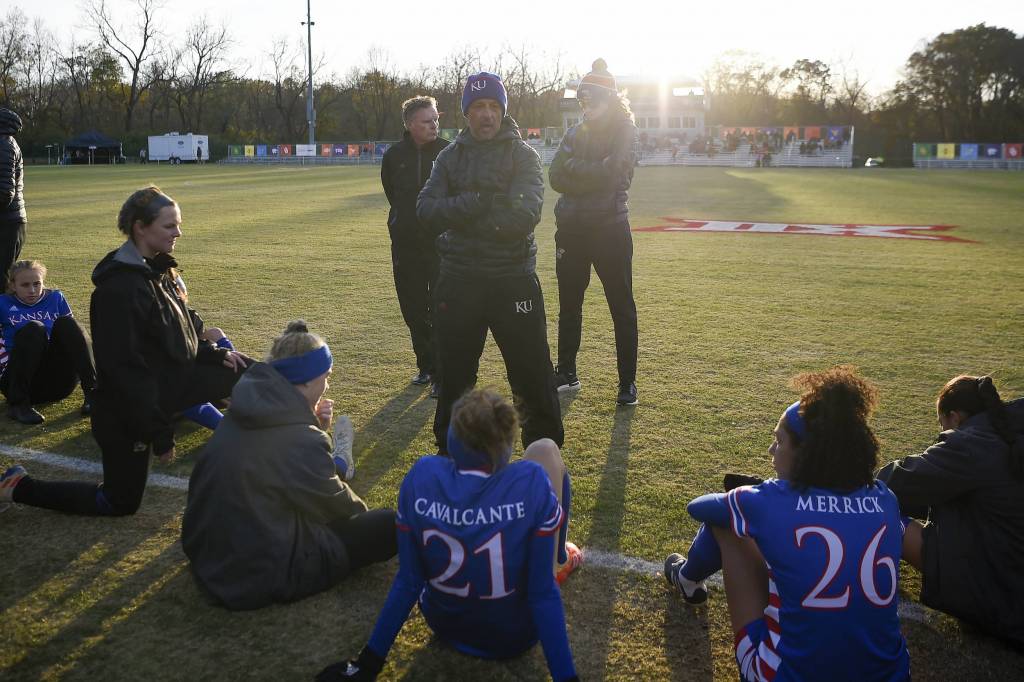 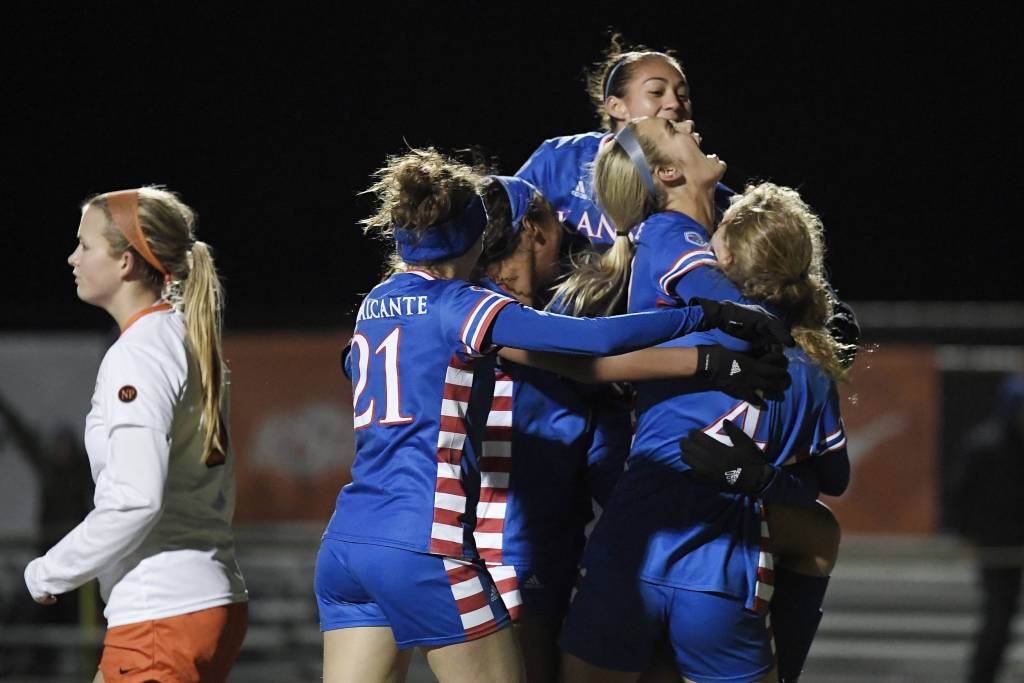 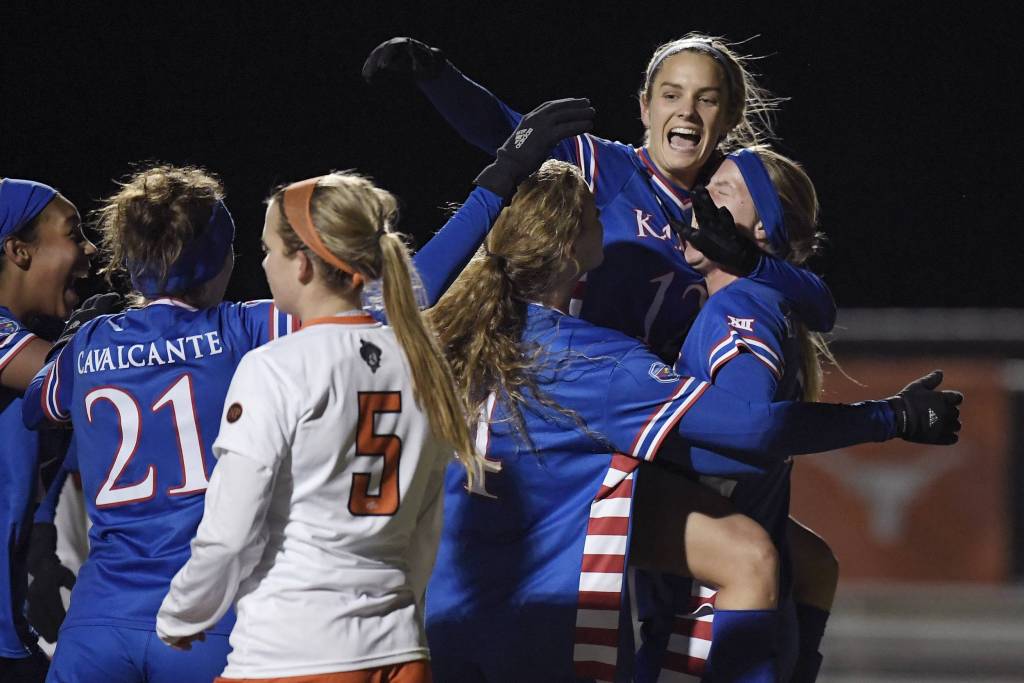 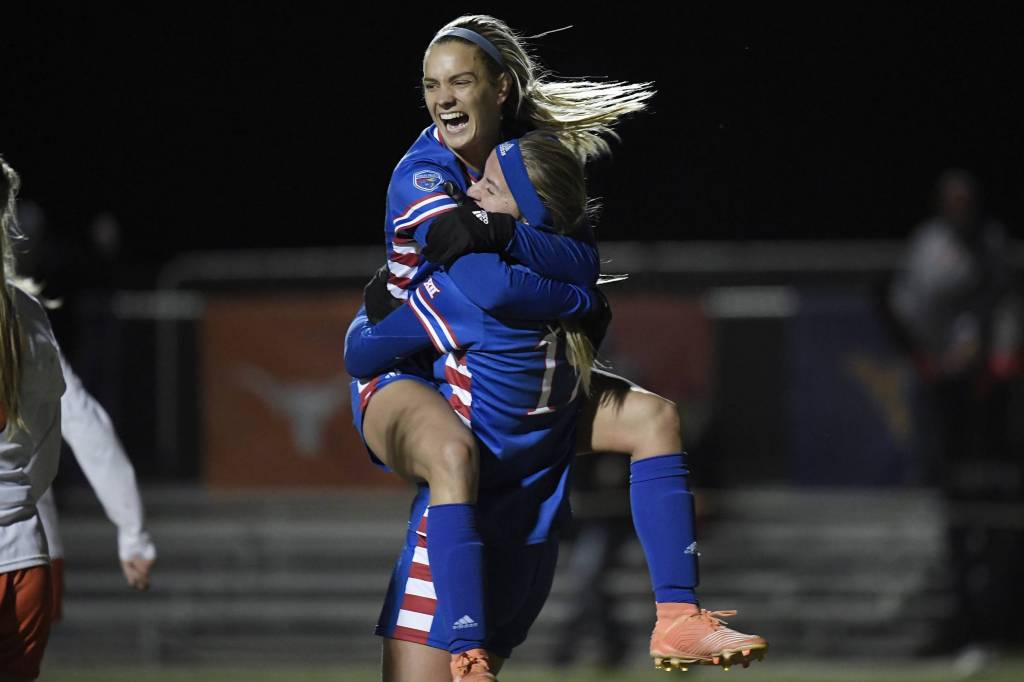 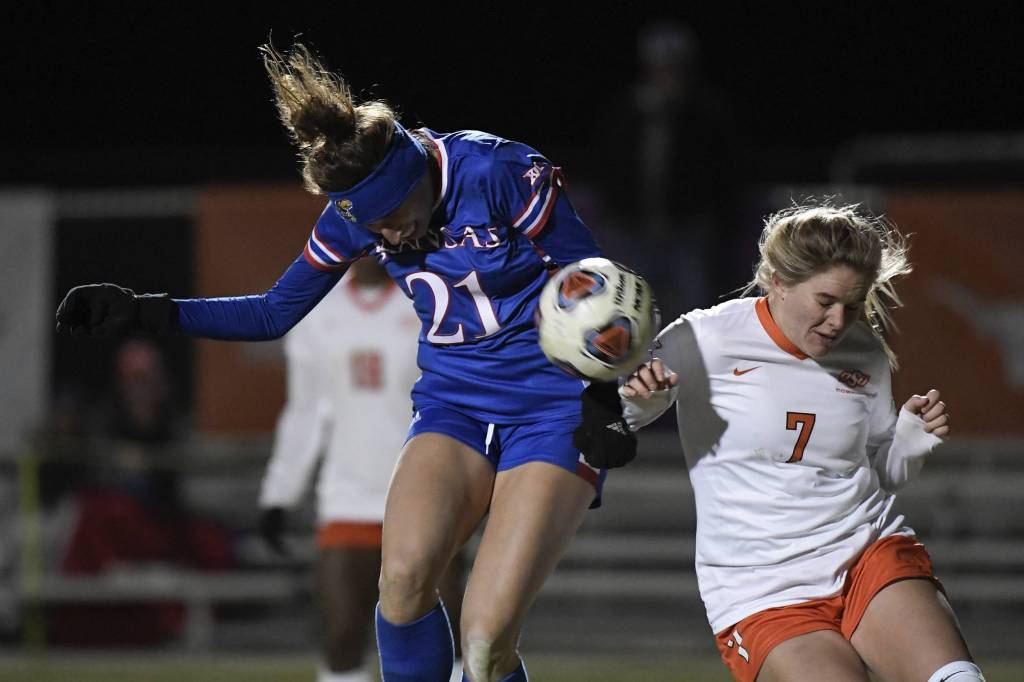 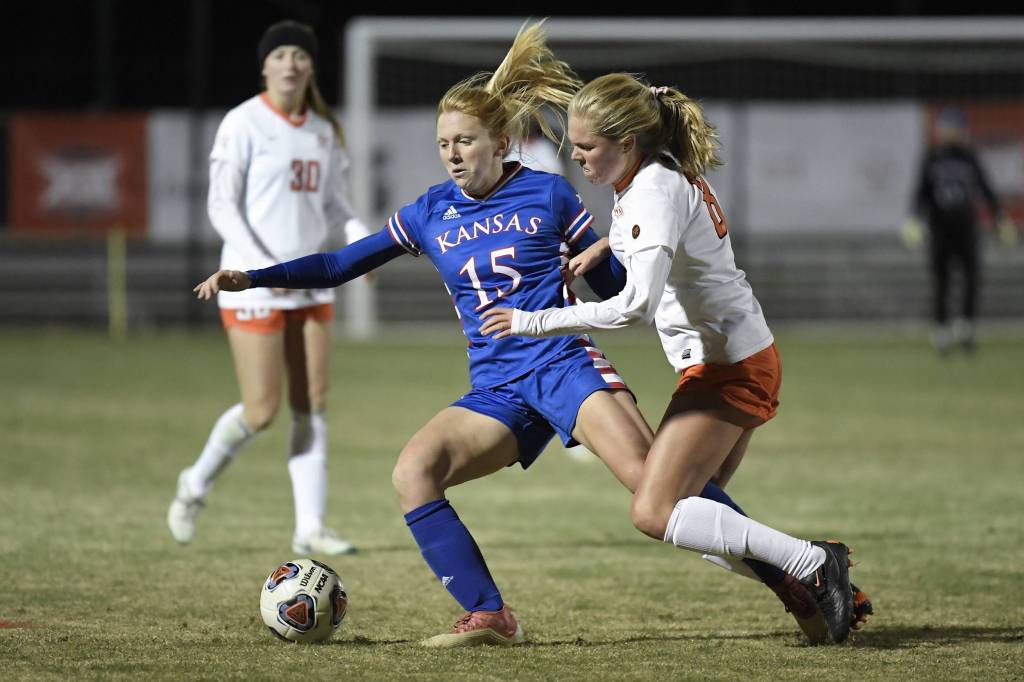 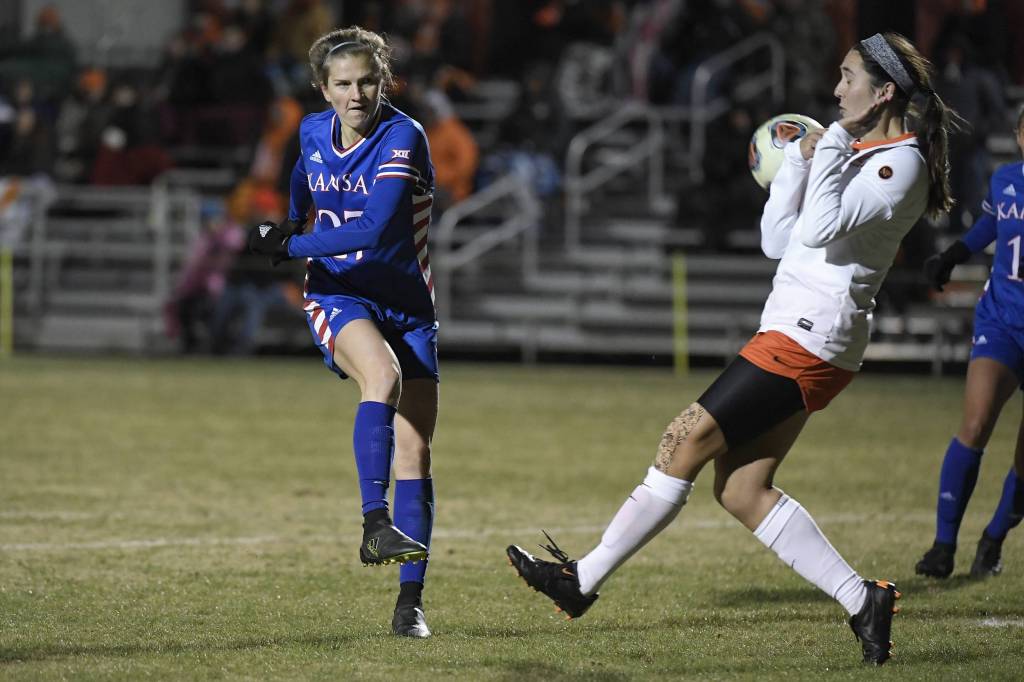 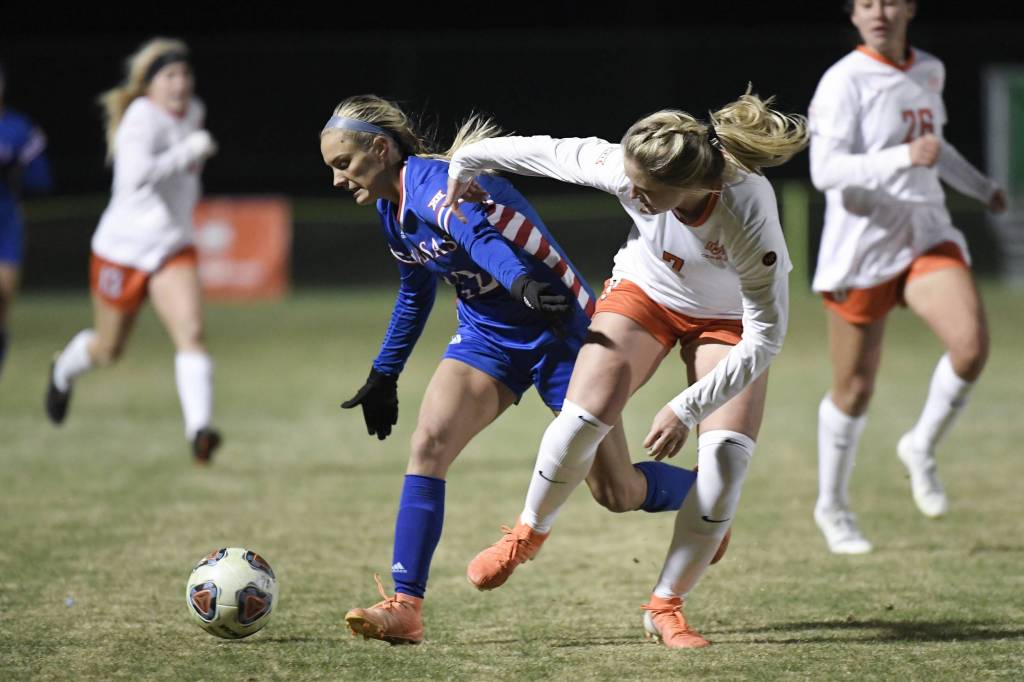 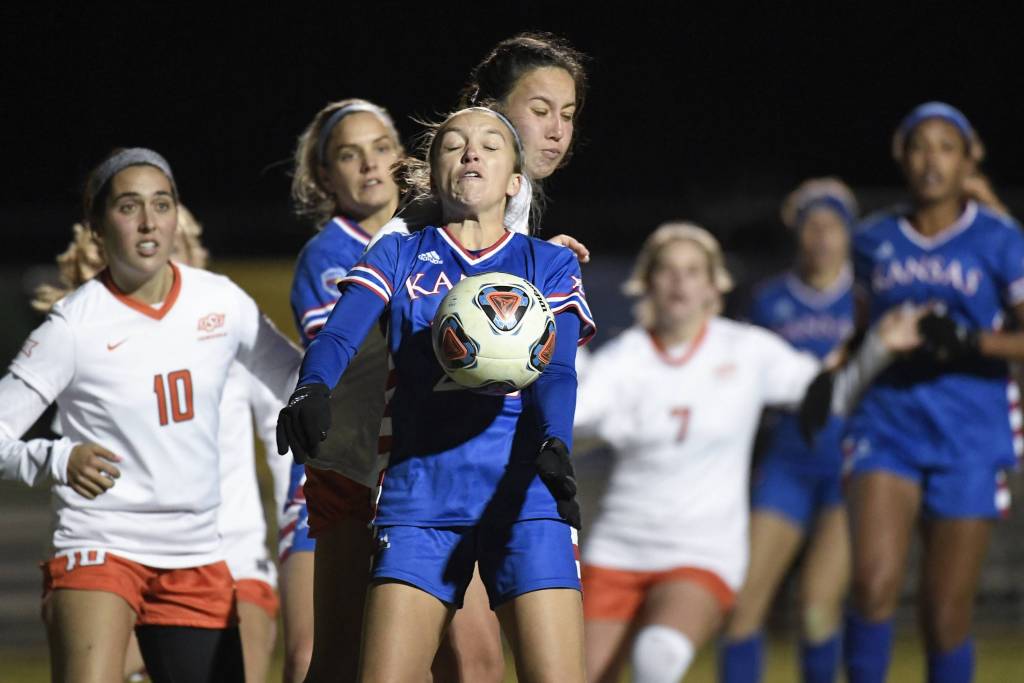 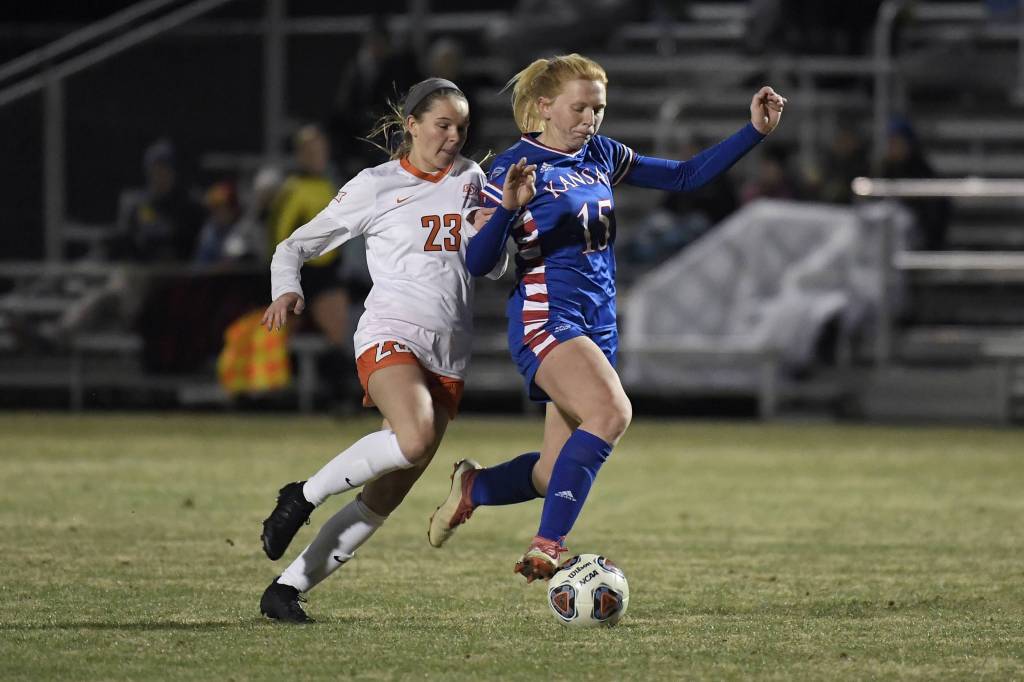 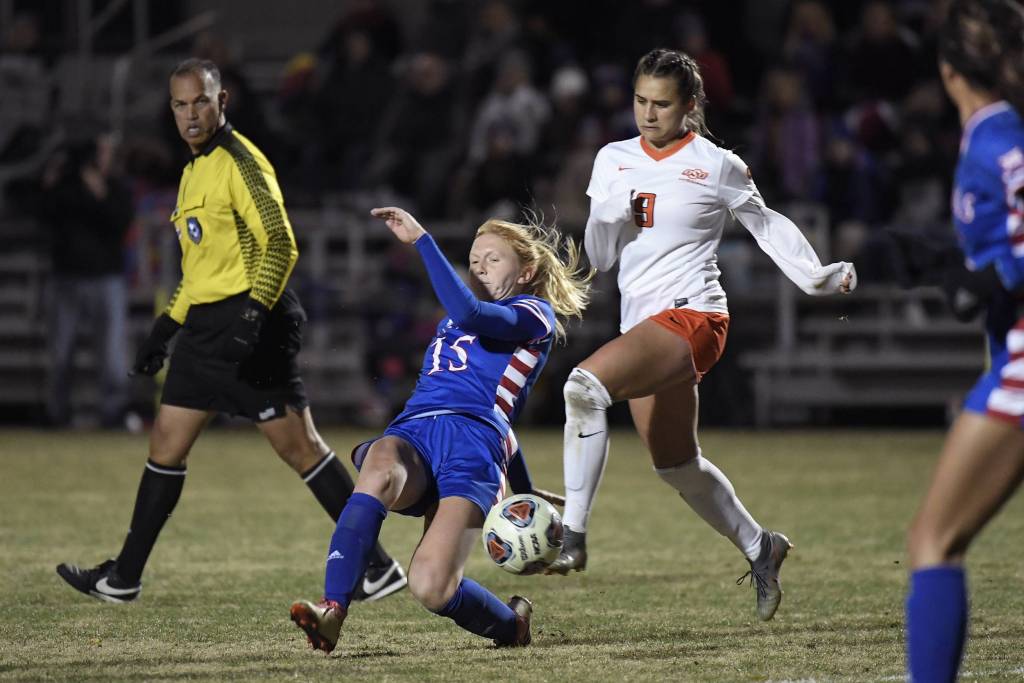 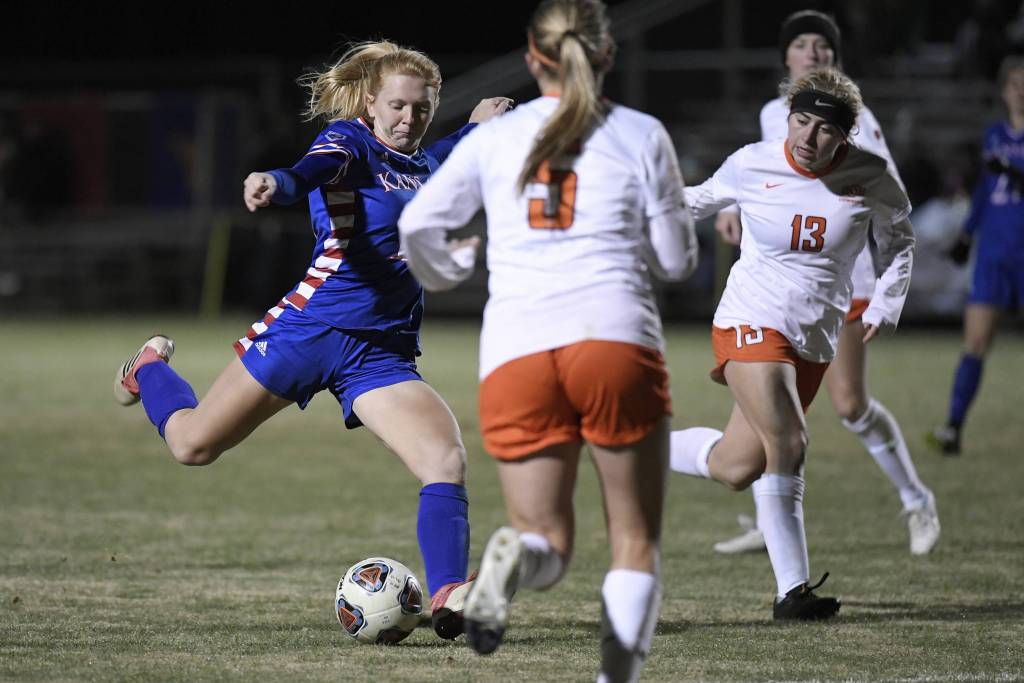 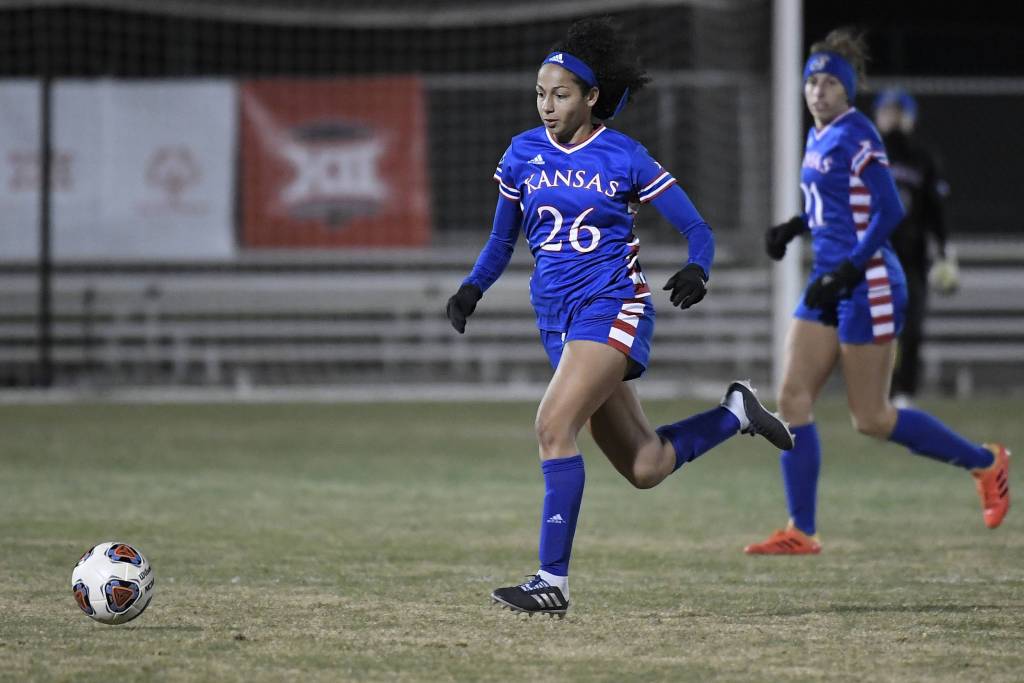 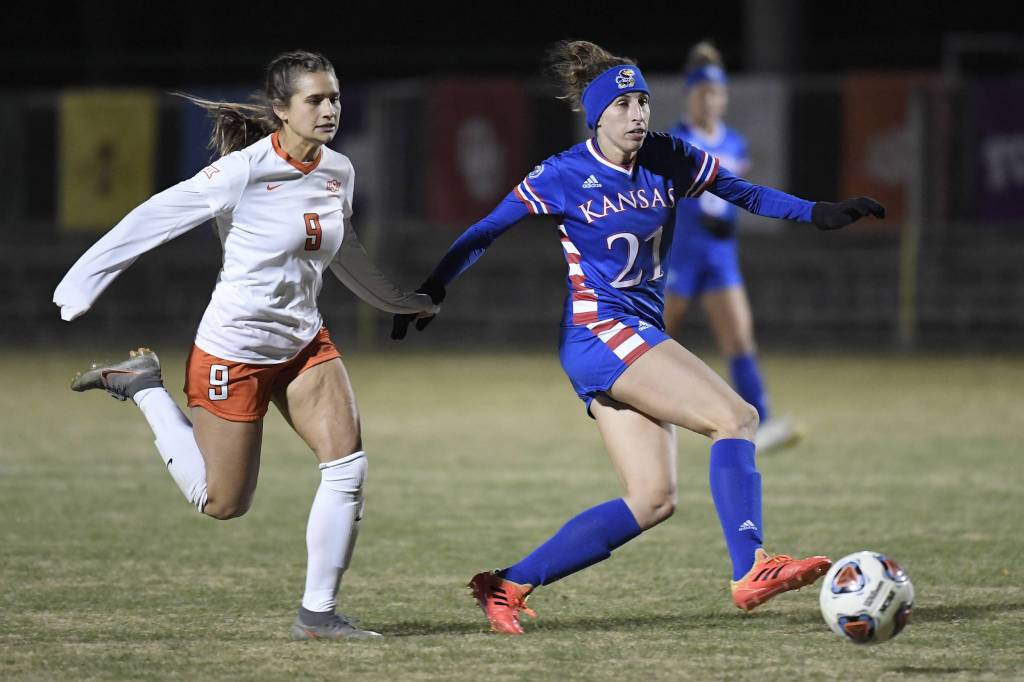 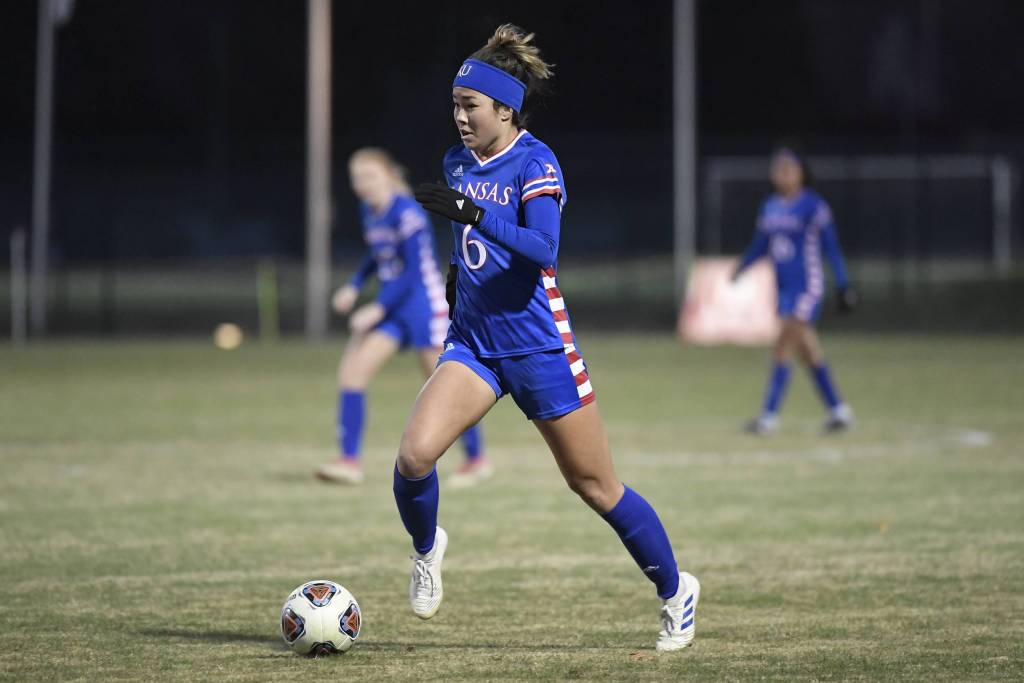 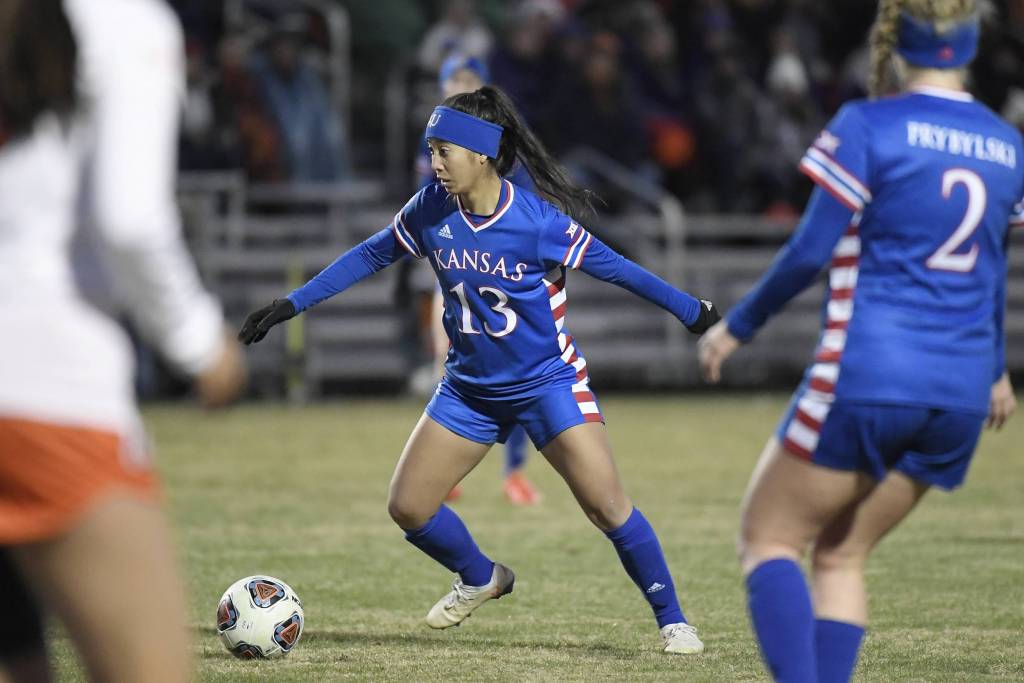 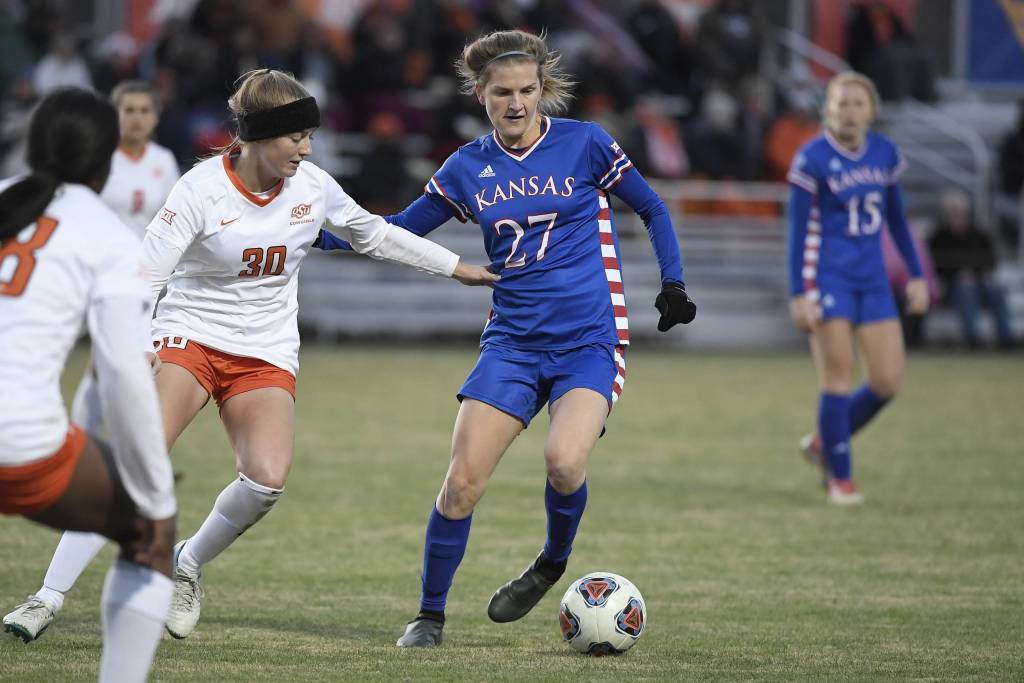 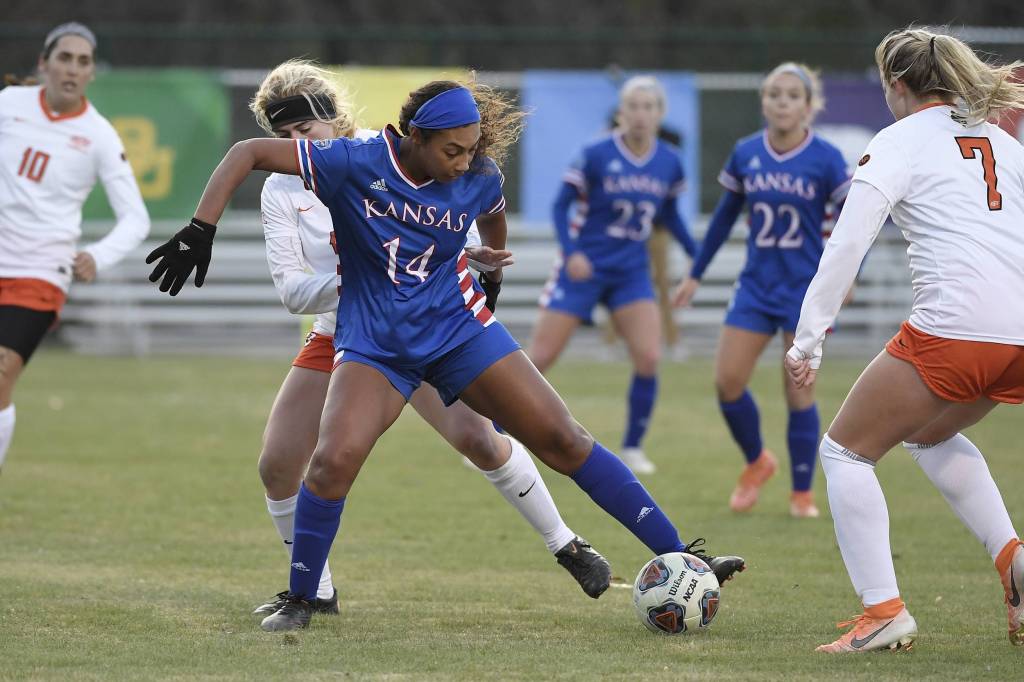 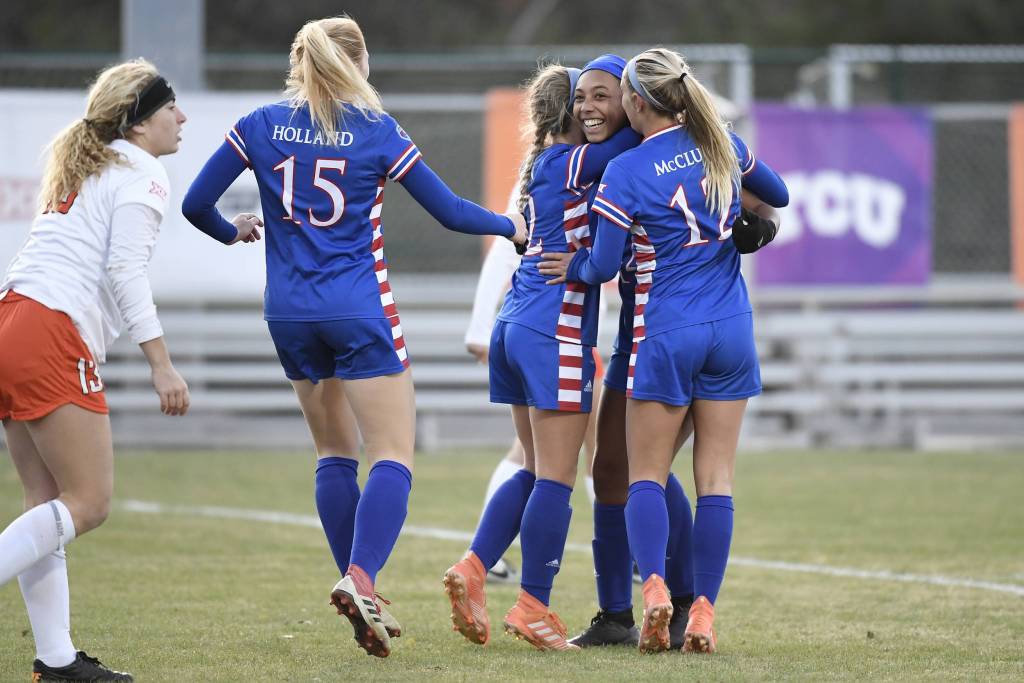 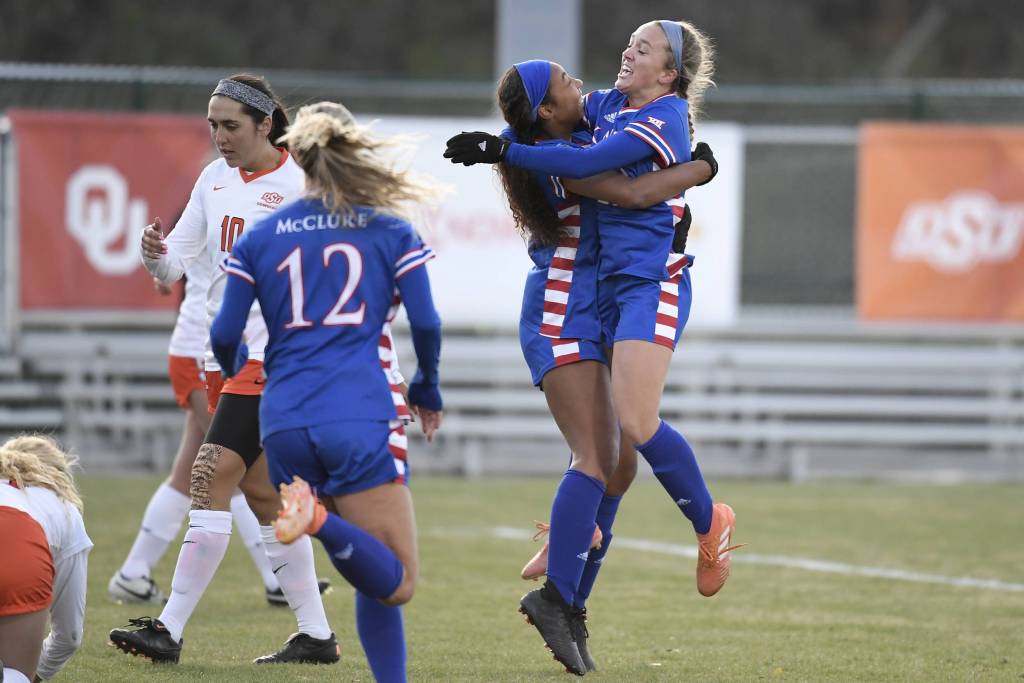 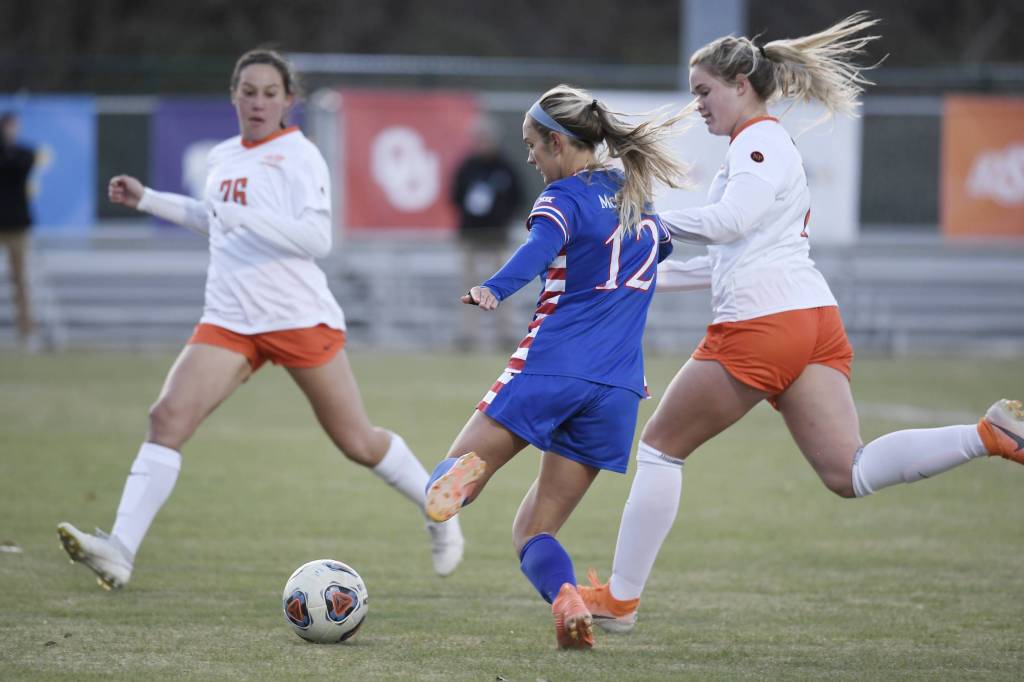 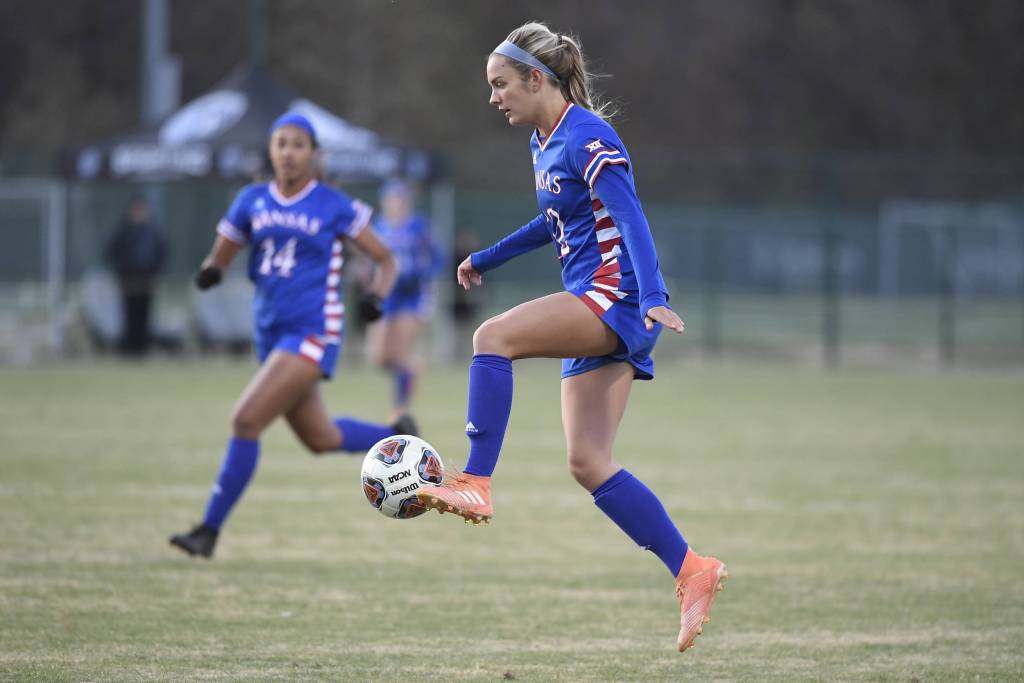 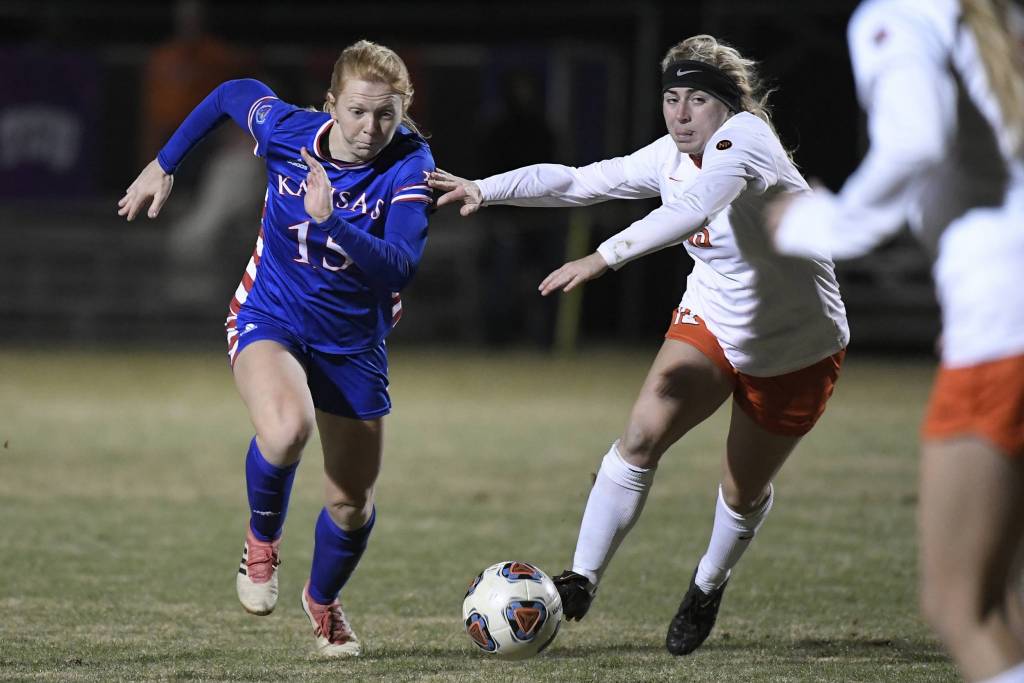 7th minute | Sam Barnett levels the score at 1-1 off the feed from McClure.