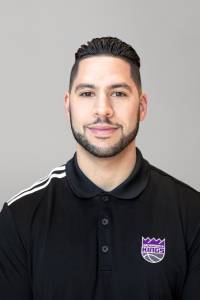 Nijem (pronounced Nigh-jum) comes to Kansas after working the previous five years with the Sacramento Kings of the NBA where he managed all aspects of sport performance.

“We are excited Ramsey will be joining our staff as our director of sport performance,” Self said. “Having the doctorate and academic background he has, Ramsey should fit very nicely, not only with the men’s basketball program but also with the future of Kansas Team Health. At 28, he’s the youngest head strength coach in the NBA and comes very highly regarded by his peers. He will bring an academic element along with energy, toughness and a track record of working with professional athletes that will also aid us in recruiting.”

“It is an honor and privilege to join the tradition of Kansas basketball,” Nejim said. “I am excited to work alongside Hall of Fame coach Bill Self and his staff while supporting the development of the young men currently on the roster, and the Jayhawks to come. I look forward to working with Kansas Team Health to provide integrated performance services to the men’s basketball program and most importantly be a resource to the student-athletes on and off the court. I am thrilled to join the KU family and Lawrence community.”

“Ramsey will be a strong addition to KU basketball and our model of student-athlete care,” said Jeff Long, Director of Athletics. “I believe he is an ideal fit because he has earned a doctorate in his field of study and has trained at the highest level of basketball. We’re excited to get him to Lawrence to work with our men’s basketball student-athletes and be an integral part of Kansas Team Health.”

Self said Nijem will tie up loose ends in Sacramento this week and plans to report to KU on Monday, Sept. 9.