LAWRENCE, Kan. – The Kansas women’s basketball team fell to Pitt State 90-82 in its first exhibition game of the 2019-20 season in Allen Fieldhouse on Sunday, Oct. 27.

The Jayhawks had six players score in double-figures. Sophomore Brooklyn Mitchell led the team, scoring 19 points on 52.9 percent shooting from the field and contributed three rebounds and three assists.

Junior Tina Stephens came out strong in the first half of her Jayhawk debut. Stephens scored all 12 of her points in the first stanza and tallied six boards in the game.

Down in the paint, junior Bailey Helgren notched a double-double, scoring 10 points and grabbing 10 boards.

The Jayhawks’ defense was its downfall. Pitts State knocked down 13 3-pointers and shot 52.2 percent from the field. The Gorillas had five players finish in double figures.

Kansas will play its final exhibition game against Emporia State on Sunday, Nov. 3, in Allen Fieldhouse at 2 p.m.

Z. Franklin and Mitchell has 11 points heading into the fourth. pic.twitter.com/nMXEvx6Ryv

De Carvalho puts the Jayhawks with in 5 points.

Brooklyn Mitchell is on 🔥 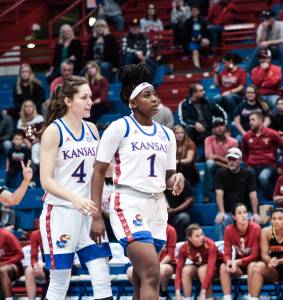