The Jayhawks last played a two-game midweek series against Air Force, beating the Falcons in both contests and reaching the 20-win mark on the season. The Bears traveled to Sam Houston Tuesday and earned the victory.

In the victories over Air Force, Kansas tallied 20 runs in the two games, including 13 runs in Tuesday’s contest. The Jayhawks received home runs from Tavian Josenberger, Conner VanCleave and Jack Wagner. The trio hit their first home runs of the season with Wagner’s sending the Jayhawks off victorious in the eighth inning. Wagner and Josenberger’s homers were their first career as a Jayhawk. Sam Brady earned his first start Tuesday and was relieved by Ryan Vanderhei before Nathan Barry pitched the final 3.0 innings of relief for the victory.

In the Wednesday matchup, Kansas again jumped out early on Air Force, scoring all seven of its runs in the first two innings. Skyler Messinger and Tom Lichty both logged multi-RBI games, while James Cosentino hit a solo home run for his third home run of the season. Everhett Hazelwood earned the start and pitched through three before Steve Washilewski relieved him. Washilewski pitched the next three innings to earn his third victory of the season. 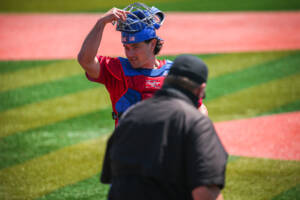 OPPONENT PREVIEW: BAYLOR
Baylor (22-11, 3-6 Big 12) enters the series winners of nine of its last 10 games, including a four-game sweep over North Carolina A&T and a series victory over West Virginia. The Bears last played April 13 at Sam Houston, earning the 4-1 victory.

At the plate, Baylor has a .299 team batting average and is led by Jared McKenzie. McKenzie is their team leader in batting average (.366), hits (52), runs (43), home runs (7) and slugging percentage (.606). Andy Thomas has a team-high 38 RBI and is second on the team with five home runs. Five bears have started all 33 games this season.

Baylor holds a 3.72 team ERA, and plan to throw Tyler Thomas, Blake Helton and Hayden Kettler. The trio are 8-6 this season, in their 22 starts. Thomas boasts a 1.97 ERA while leading the team with 50.1 innings pitched and 50 strikeouts.

It’s JOSEN(BERGER) TIME
Tavian Josenberger completed a feat that no other Jayhawks has in program history, rattling off six hits against a Big 12 opponent. The freshman from Kansas City, Missouri went 6-for-6 with a double and triple against the Sooners April 10. The six-hit performance tied a program record for hits in a game with current Jayhawk assistant coach Ritchie Price, who belted six hits against Oakland on Feb. 26, 2004. Josenberger sits atop the NCAA rankings for hits in a game this season with seven others, and is the only player to complete the feat against a P5 opponent.

Following the two-game Air Force series, Josenberger reached a 15-game hitting streak and a 20-game reached base streak. Both team highs this season.

UP NEXT
Kansas plays a single midweek game at UT-Arlington April 21 before playing a three-game Big 12 series at TCU April 23-25.