A native of Lawrence, Kansas, Stanclift earned a bachelor’s degree in education from KU in 1972 and a master’s degree in physical education in 1976. He played baseball for the Jayhawks in 1972 and continued to compete two seasons semi-professionally. Following his baseball career, Stanclift returned to KU and coached both the volleyball and softball programs.

From 1976 to 1978, Stanclift guided the KU volleyball team to a 101-63-6 record, advancing to the Association for Intercollegiate Athletics for Women (AIAW) Region VI playoffs all three seasons.

Stanclift led KU’s softball team to an impressive 359-175 record in his 11 seasons from 1976 through 1987. In 1977 the Jayhawks went 26-12, claimed their first-ever softball conference title, advanced to the AIAW College World Series and finished seventh in the nation. The Jayhawks would return to the AIAW College World Series in 1979 (finishing ninth) and make trips to the NCAA Regionals in 1983, 1985 and 1986 under Stanclift. KU also won two more Big Eight titles in 1979 and 1983.

Stanclift coached six softball players to seven All-America honors, 18 Jayhawks earned 29 All-Big Eight selections and he led Kansas to three NCAA Tournament appearances in 1983, 1985 and 1986. He was named the 1986 NCAA Midwest Region Coach of the Year. A member of Kansas Athletics’ K Club, Stanclift was inducted into the Kansas Athletics Hall of Fame in 2000. 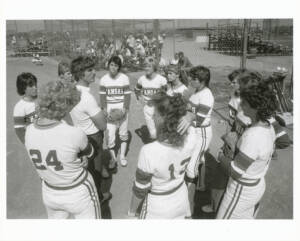 Following his KU coaching stints, Stanclift worked 24 years (1989-2013) as a recreation supervisor for the Lawrence Parks and Recreation Department before turning to volunteer coaching at the collegiate level under Jamie. He served as the volunteer assistant coach at Baker University the six years prior to joining the Wingate staff in summer 2019.

There will be a visitation for Stanclift on Monday, Oct. 5, from 4-7 p.m., at Warren-McElwain Mortuary in Lawrence. A celebration of life details are pending.