LAWRENCE, Kan. – For the second time this season, both the Kansas men’s and women’s cross country stood atop the leaderboard at the end of the day to keep the Rim Rock Collegiate Challenge trophies in Lawrence for yet another year.

With inclement weather invading the Lawrence area Saturday morning, the meet was delayed on numerous occasions due to lightning. However, the majority of the teams and coaches remained at Rim Rock Farm, in an attempt to get the meet run and their student-athletes some additional competition as they head into the heart of the season.

❗️❗️Due to thunderstorms in the Lawrence area, we are currently in a weather delay at Rim Rock Farm for the 2019 edition of the Rim Rock Collegiate Classic ❗️❗️Stay posted for more information to come as details become available … #KUxc

After sending runners, coaches, staffs and fans all back to their vehicles in the parking lot for safety precautions, the storms in and around the Lawrence area seemed to dissipate for a window of time, during which meet officials and coaches gathered to make a decision on how to proceed with the meet. Once the weather forecast gave an “all clear” to run, a 20-minute warm-up time period was allotted for the women’s teams. Their originally scheduled 9 a.m., 6K began two hours later, at exactly 11 a.m.

We've received the "all clear" from the lightning delays at Rim Rock Farm. The coaches have met and agreed upon a 20-minute warm-up for the women, whose 6K race will not start at 11 a.m. Men's 8K race status still TBD at this point in time, dependent upon the weather. #KUxc

""I loved that we had to deal with that (the inclement weather conditions). We talked to them beforehand that this is why we do all the crazy stuff in the mornings and in the tough winter conditions and to be outside, (in order) to be used to when things aren't set in their normal pattern. And you have to be a lot tougher. It's about competition. You're not worrying about times, you've just got to go out there and fight through it.""

In rainy, wet and muddy conditions, the women’s race started with a bang. Kansas sophomore Ally Ryan got out to an early lead, one which she would not relinquish throughout the entire race. She traversed today’s course in a time of 22:59.3. This was Ryan’s second first-place finish of the season, as she also claimed the Bob Timmons Classic individual title back on August 31.

Other Jayhawk women who contributed to the team title included juniors Cameron Gueldner (23:38.2) and Catherine Liggett (23:44.5), who crossed the finish line in fifth and sixth place, respectively. Two more KU women rounded out the top-10 finishers with freshman Kalea Chu taking ninth place in 23:56.9 and senior Riley Cooney rounding out the KU scorers with her time of 23:58.2, which was good for 10th place.

Sophomore Ally Ryan leads the women's 6K from start to finish and claims gold in 22:59.3. It's her second-straight individual victory at Rim Rock Farm this season! The Jayhawk women also claim another team win on their home course. #RockChalk #KUxc

""I thought the one thing the women did a great job of competing in the middle of the race; we need to do a little bit of a better job of working as a pack during the first half of the race." "

KU’s Michael Melgares was the first collegiate runner to cross the finish line in the men’s 8K. His time of 25:47.4 was approximately 10 seconds behind the overall top-two unattached finishers of the race, Joe Moore (25:30.7) and Chris Melgares (25:31.7), both members of the Kansas City Smoke.

Running as a pack worked out well for the Jayhawk men, as they saw four finishers among the top-10 of the 118 whom competed. Senior Dylan Hodgson came in fourth with his time of 25:54.9, and he was followed closely by sophomore Jake Ralston in a time of 25:59.7, which was good for sixth place. John Luder (26:18.3) and George Letner (26:28.0) rounded out the Jayhawks’ scoring with their 10th and 11th-place finishes, respectively.

KU's Michael Melgares claims the men's 8K title out of the collegiate runners at the 2019 Rim Rock Classic. He finished with a time of 25:47.4. #RockChalk #KUxc

""The guys did an outstanding job of working as a pack, keeping that whole group together throughout the entire race, until about half a mile to go, was fantastic. I'm excited about where the guys are. The guys are pretty healthy, the girls are pretty healthy and we've got another big one (meet) in two weeks."" 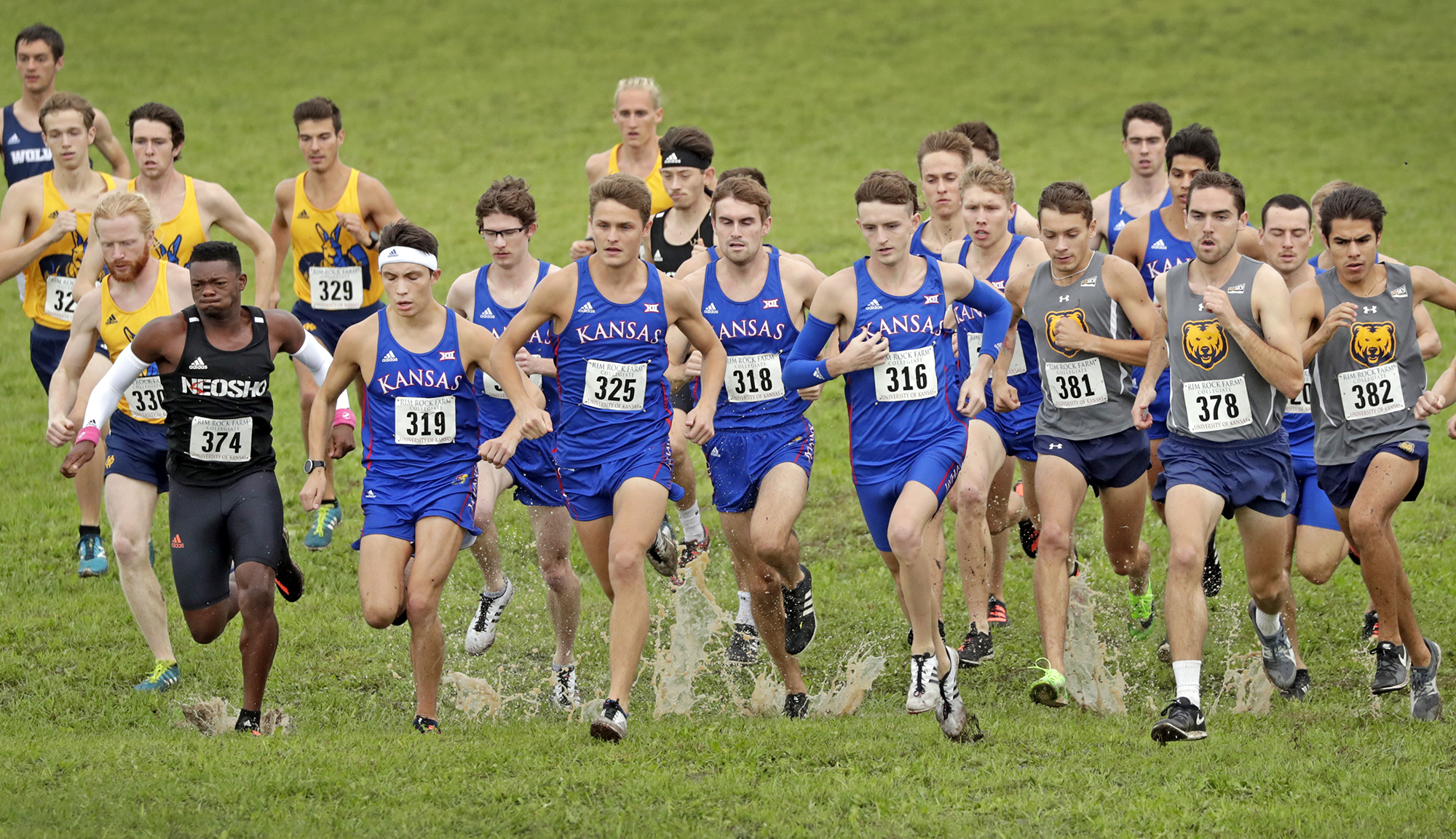 ""From a training perspective, absolutely (the last month off from competition was beneficial to the team). From a training perspective, we had to do a lot of really good work. Sometimes, when you have that break, like a couple of years ago, we came out here and you could see that we were not competitively focused. The conditions today helped (us) zone back into that competitive focus. I thought we competed really well, so the layoff definitely didn't hurt us from that perspective.""

UP NEXT
Kansas cross country will return to action at the Pre-National Invitational on Saturday, Oct. 19. The meet will take place at the LaVern Gibson Championship XC Course in Terre Haute, Indiana, at a time that has yet to be announced.