📸 Through The Lens | Three of a Kind

Imagine how Kansas head tennis coach Todd Chapman felt when he thanked three players on Senior Day in April 2019. Nina Khmelnitckaia, Anastasia Rychagova and Janet Koch had to make the coach feel like the miners of old in California crying out, “Gold! I have struck gold!”

I know I struck gold photographing the trio for four years. Their intensity always stood out and made them three of a kind. They never held back an ounce of effort to help the team. Each garnered the collegiate No. 1 ranking in singles or doubles at some point in their careers. By the end of their final season, every match meant something that KU tennis had not seen in 20 years.

They helped lead the Jayhawks to four years of NCAA Championship action. They won the 2019 Big 12 Tennis Championship in Lawrence with a stirring victory over Texas. A deep run into the NCAA team and individual championships wrapped up their distinguished careers.

Khmelnitckaia and Rychagova arrived from Moscow, Russia. Koch from Durbanville, South Africa. Each left as All-Americans.

The tall and lean Khmelnitckaia always bounded around the court, leaping and pumping her fists with a carefree joy that brought smiles to every fan’s face. Tears flowed freely, though, after the hardest-fought matches. That made Nina an even greater fan favorite. She teamed with both Rychagova and Koch in doubles and never missed a beat.

Rychagova seethed with emotion over every shot. It was easy to discern whether she was playing well or not. Former assistant head coach Caroline Lilley studied Nas, her nickname, intensely throughout her key matches. Lilley was always encouraging, yet, at times, needed to be quite stern as Nas’ mood sagged. On the court, Nas would squat deeply with a clenched fist and explode to full height with a shattering roar of delight over a critical point won.

Koch contained her emotions more than the other two. The growing intensity that built as matches wore on was evident in her face and body. Janet seemed to will her way through matches. Her emotional outbursts were more a release of steam from a pressure cooker masked by a friendly smile. Janet displayed ease off the court and enjoyed seeing Laura and me together. She kindly corrected me for improperly pronouncing the South African tonal inflections of her first name.

Together, they were a delight to photograph. Each appreciated the photographs and complimented my efforts often. Eventually, I mastered the pronunciation of Janet’s name and learned to spell the others’ last names without having to check a roster every time. 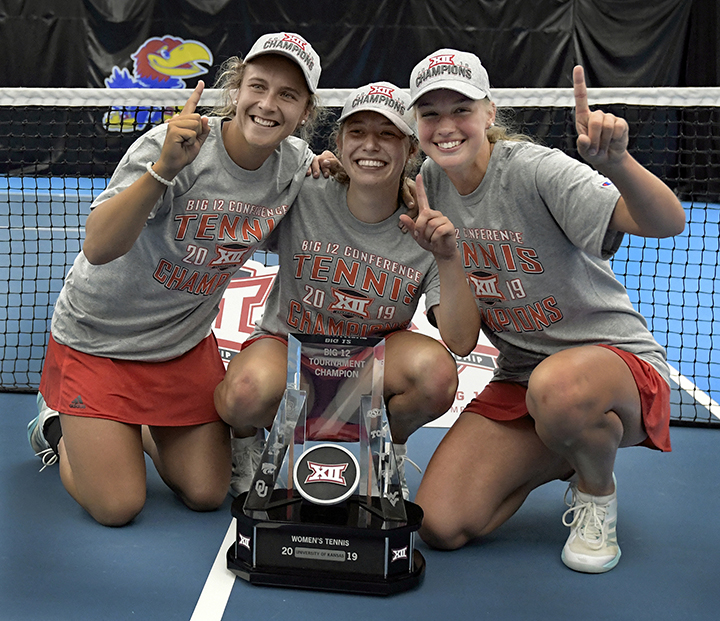 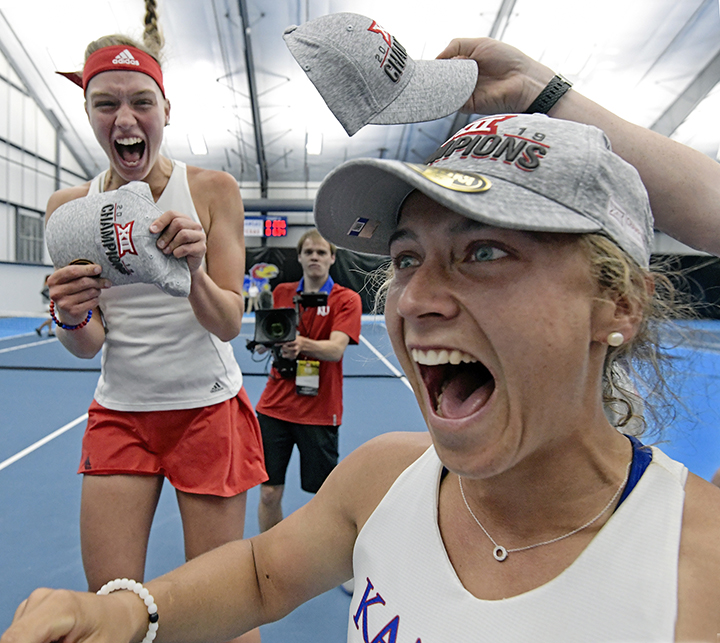 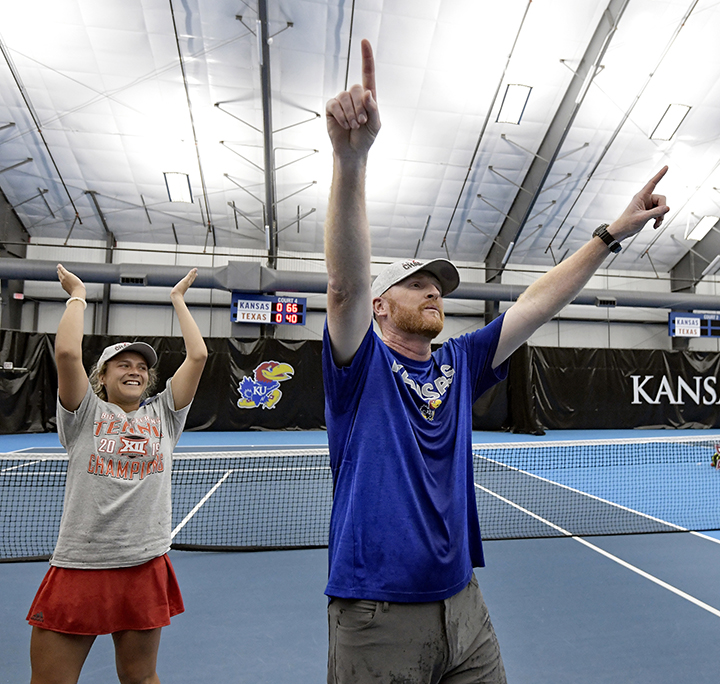 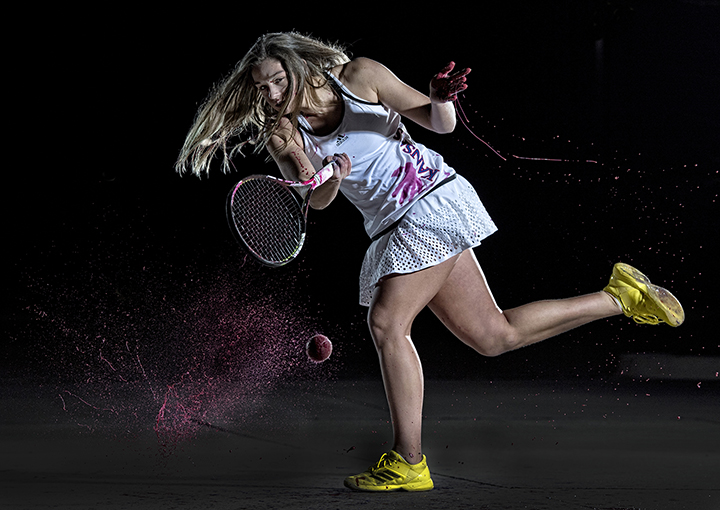 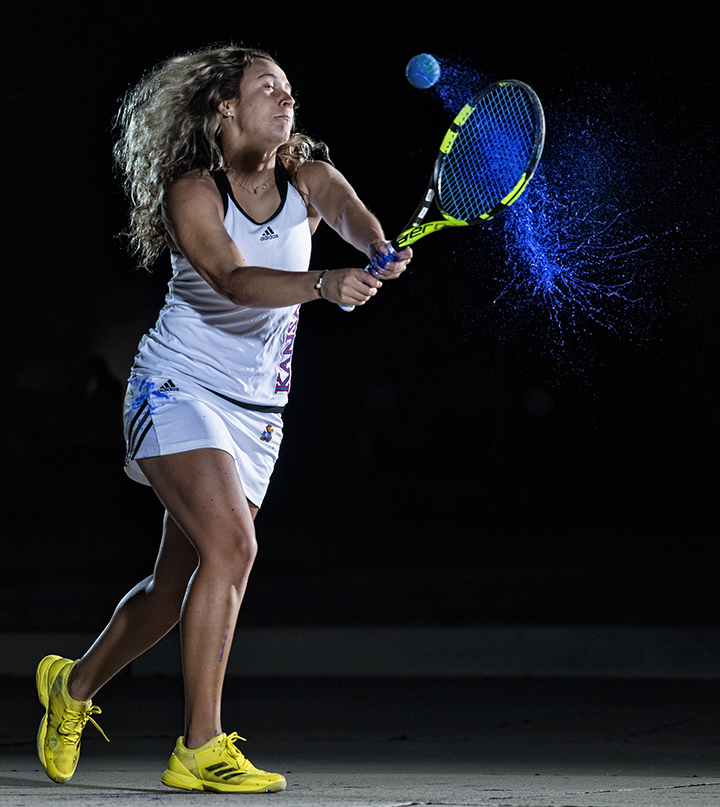 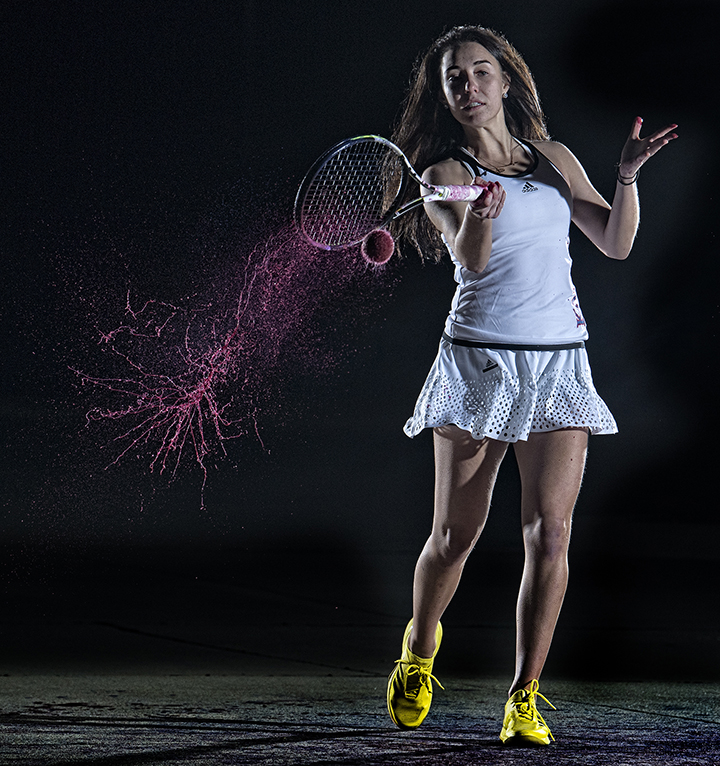 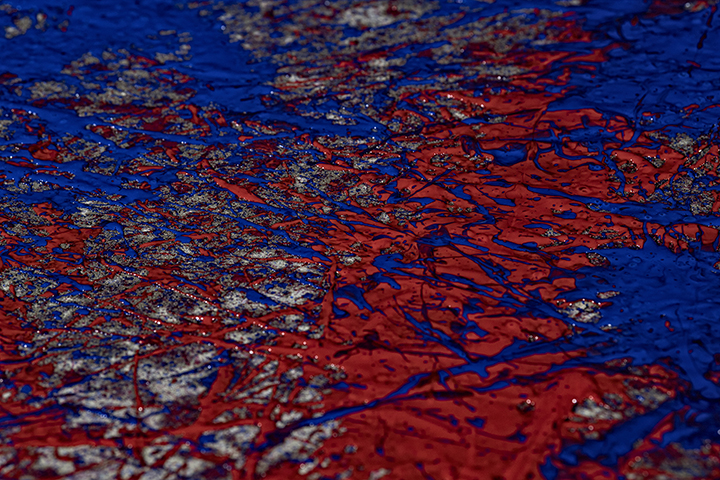 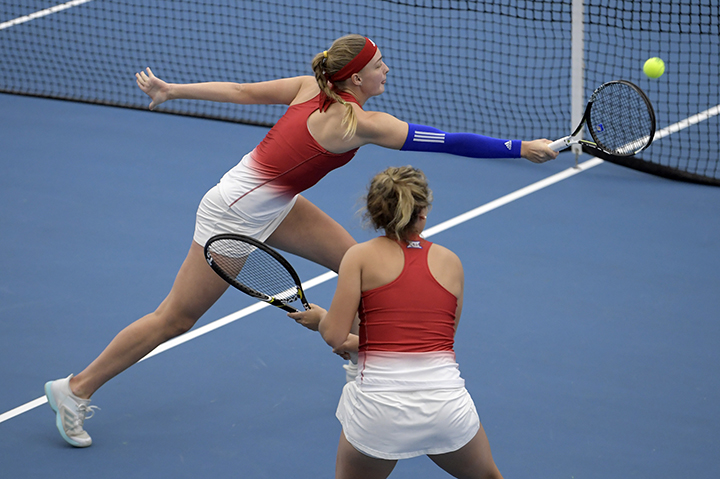 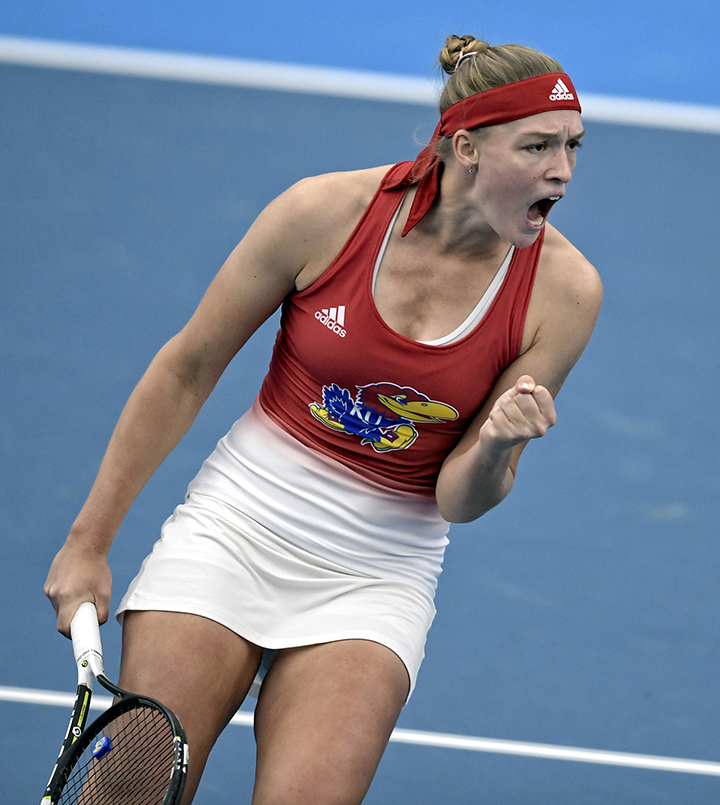 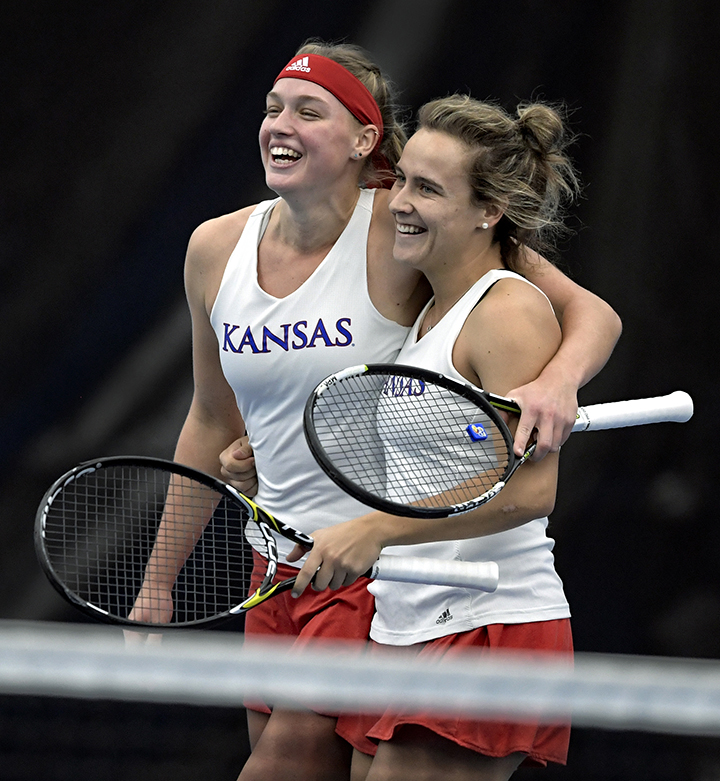 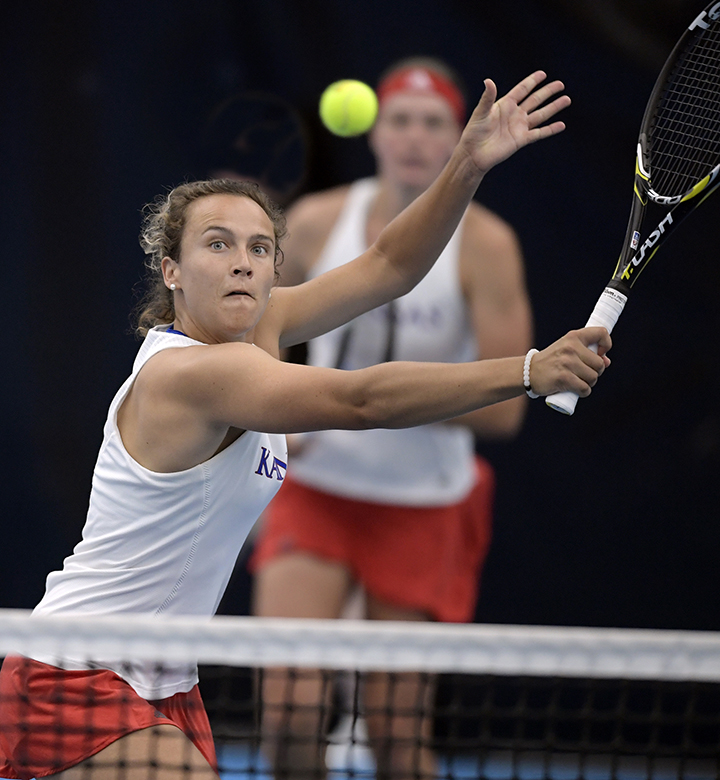 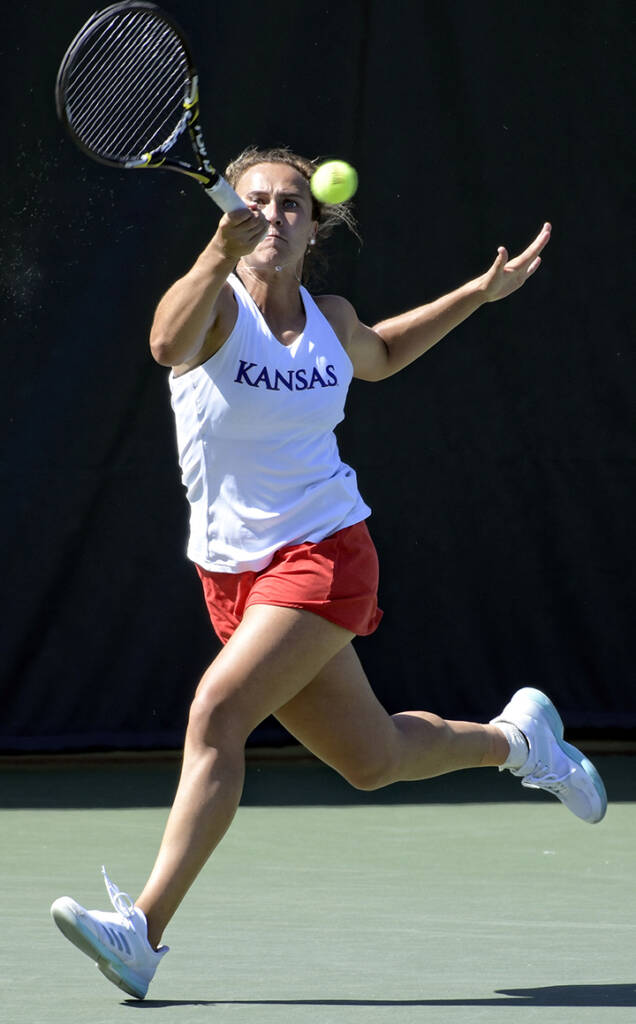 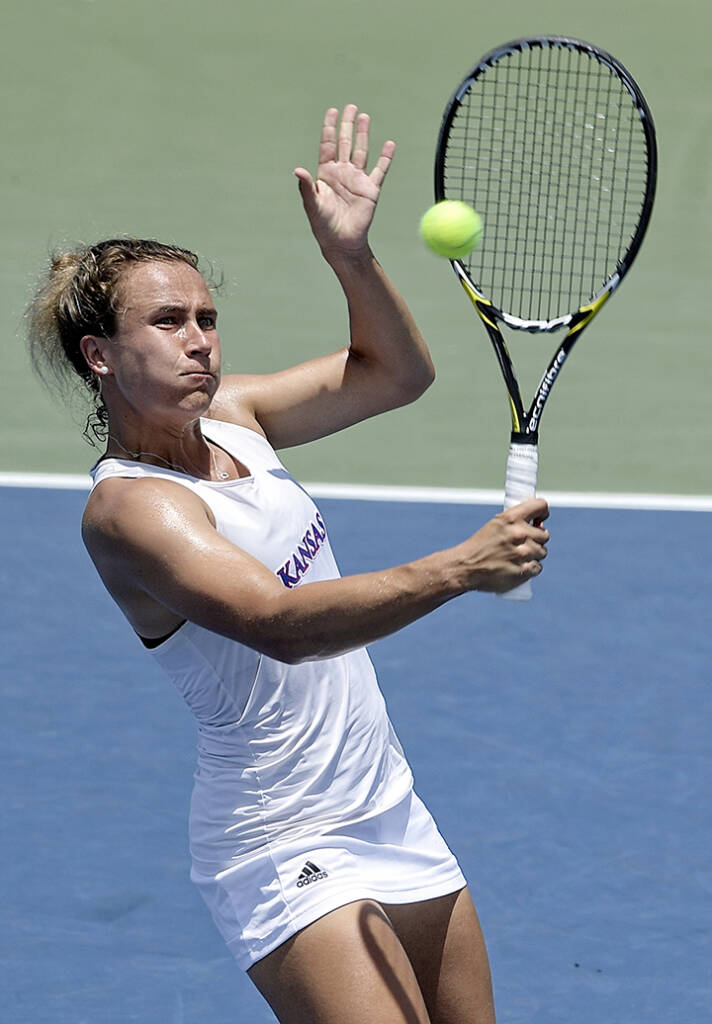 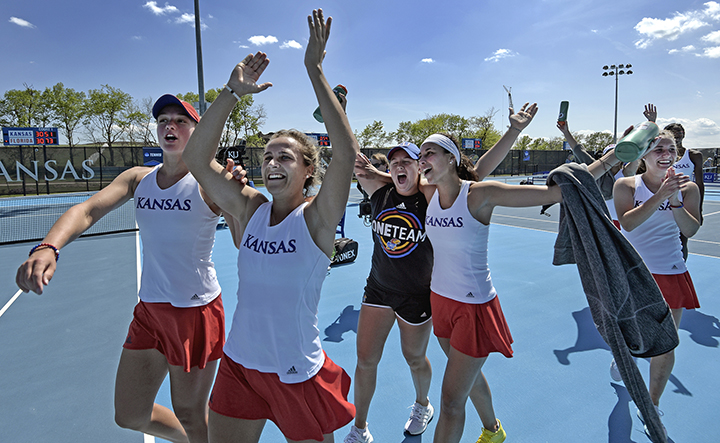 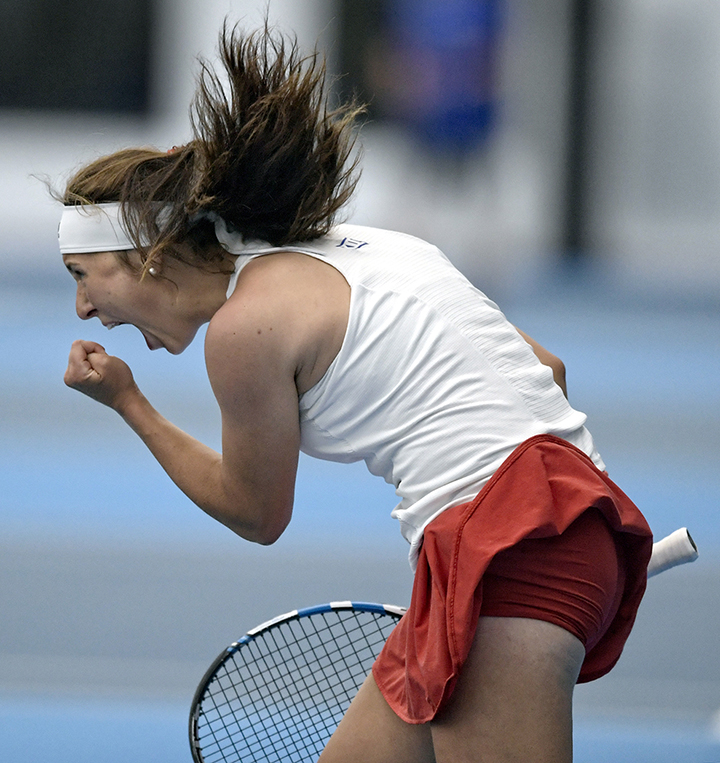 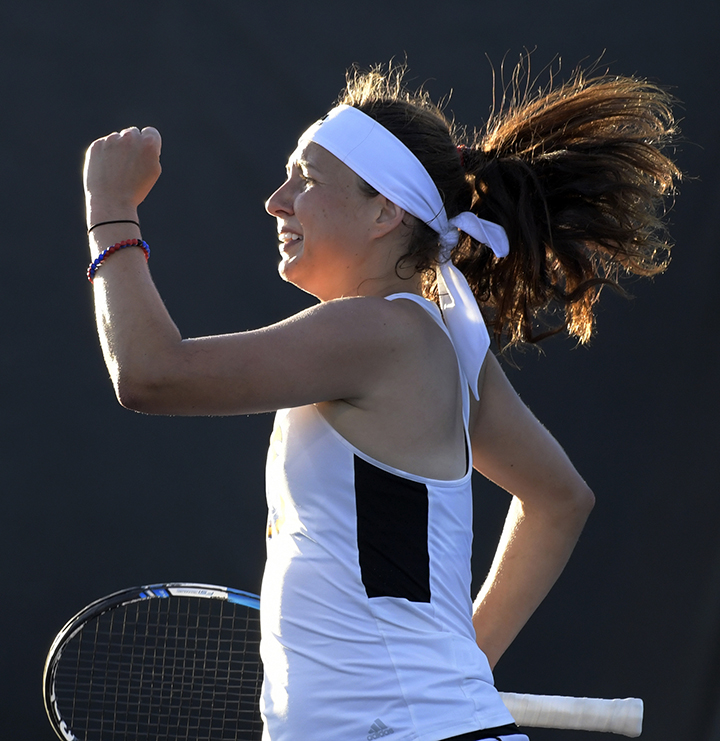 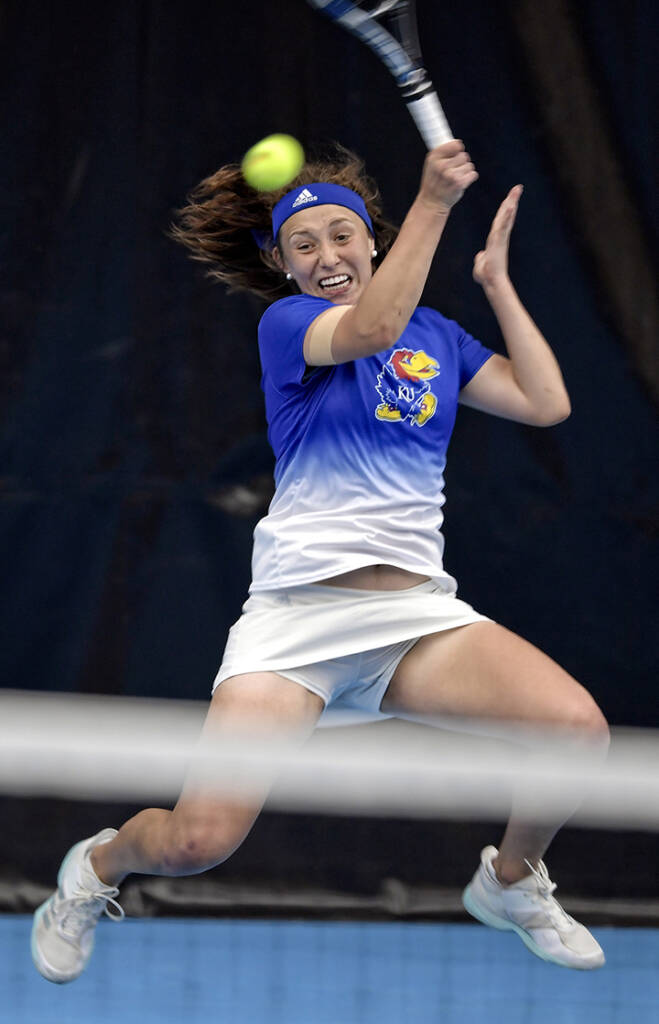 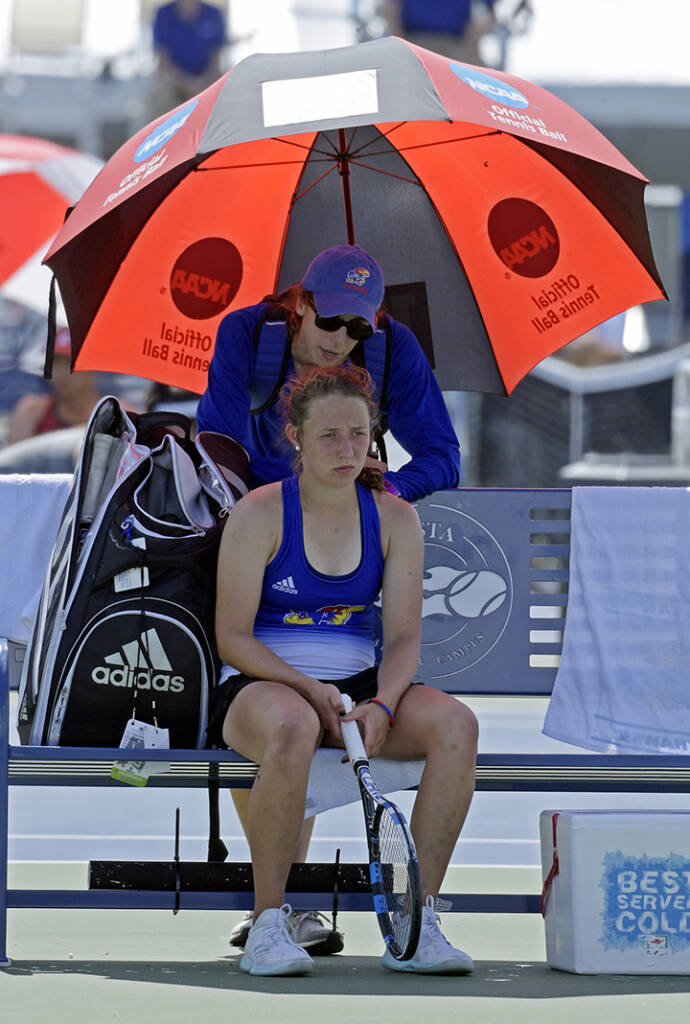 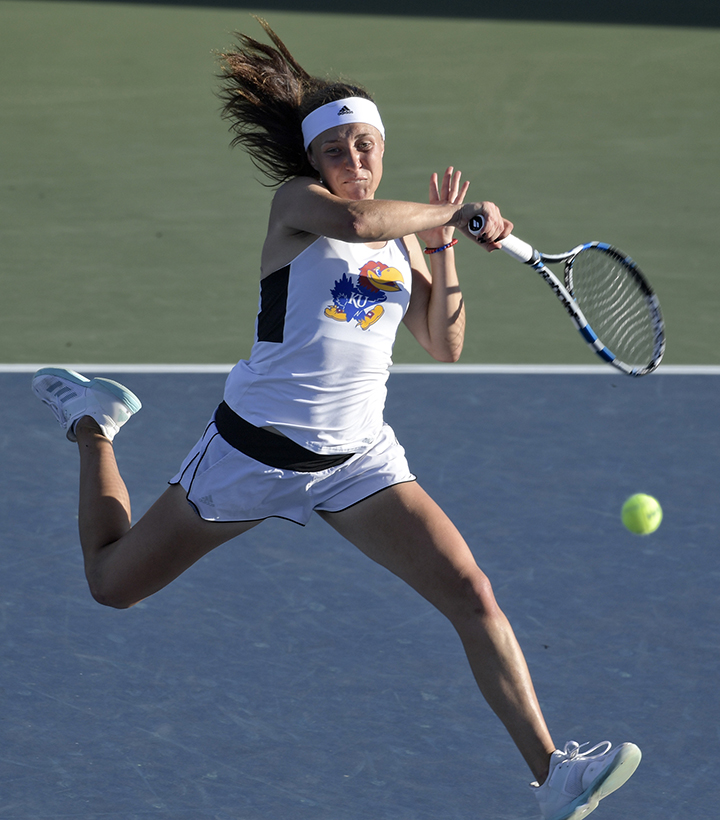 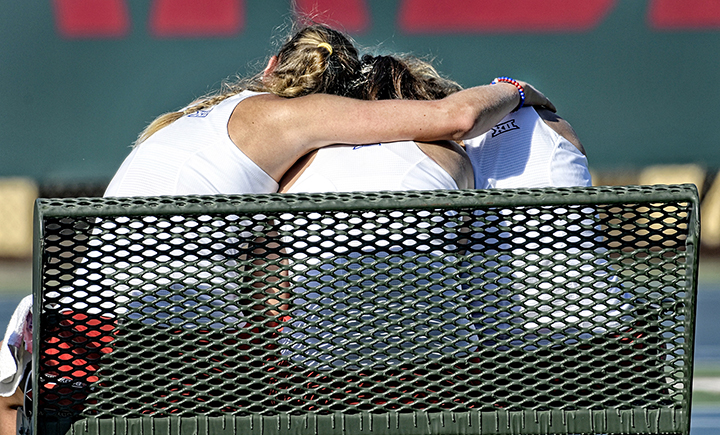 Once, with the temperature in the low 30’s in January 2018, the trio helped the tennis team create art for me. I convinced them to dip tennis balls into buckets of crimson and blue washable paint. Each smashed ball-after-ball into an open field outside the Jayhawk Tennis Center at Rock Chalk Park. My strobes illuminated the dark night with every stroke as the paint streaked off the ball and racket in unique patterns.

Even though the players kept warm in running cars parked by the field, they never hesitated when it was their turn. They hammered away as long as needed to make sure I was satisfied and pleased with the results. By the end of the photo session, the players stood together on a frigid night cheering on their final teammate.

They delighted in the mess they’d made of themselves. Left behind was modern artwork cast by the flying paint onto a concrete canvas. That sadly disappeared as an overnight snowstorm covered it and then washed the brilliant color away during the thaw.

The selection of photographs that go with this story encompass everything these three wonderful women brought to KU tennis and mean so much to me. They led a resurgence of tennis excitement for KU fans. It wasn’t just their play on the court. The players happily intermingled with the fans creating a bond that left most teary-eyed on the trio’s Senior Day.

The three finished their careers with Janet and Nina playing doubles and Nas singles in the NCAA Individual Championships in May 2019 at the sprawling USTA Tennis Campus in Lake Nona, Florida. However, I want to end the gallery with a picture from the week earlier, the end of their stunning team run through three rounds of NCAA play.

KU had just lost to Stanford 4-3 in Palo Alto, California, one victory away from advancing to the team NCAA Championships. The Cardinal, a long-time tennis power, were tested to their very limits by a rising tennis power in the Jayhawks. The sight of the three together in sadness over a battle well fought showcased their team-first attitude. That moment proved painful for me to photograph.

The strength, power and grace of these wonderful women bound to each other can be summed up by Chapman’s thoughts that he shared with me recently.

“Nas, Nina, and Janet were so instrumental in putting Kansas tennis back on the map on the national stage. All three of them bought into our vision for the future of the program. They left a lasting legacy of what it means to play for Kansas,” Chapman said.

“Each of them individually and collectively became the best players in the country and loved representing Kansas. Amazingly, all three spent time being ranked No. 1 in the country and left Kansas with the program’s first Big 12 Tennis Championship.”