LAWRENCE, Kan. – Seven-time conference coach of the year and seven-time conference champion Lindsay Hulwick Kuhle has been named the new head women’s golf coach at the University of Kansas, Director of Athletics Travis Goff announced today. A veteran coach who has coached more than 30 WGCA All-America Scholars and six individual conference champions, Kuhle comes to Kansas after nine winning seasons as head coach at the University of Denver.

“Lindsay is a proven winner and has an extensive track record of success as a head coach, assistant and as a standout student-athlete,” Goff said. “She has built a championship culture at Denver where success on the course, in the classroom and the community are cornerstones and are exactly the characteristics we are looking for our in our leader.  I’m confident her competitive spirit, vision and passion to be at the University of Kansas will significantly elevate our women’s golf program in the days ahead. After an extensive and thorough national search, we are thrilled to welcome Lindsay, her husband A.J., and their children to the KU family and the Lawrence community. Today is a great day for Kansas women’s golf and our entire athletic program.”

As the head coach at Denver, Kuhle won seven conference team titles and the Pioneers qualified for the NCAA Tournament in each of the eight seasons where a postseason tournament was held. 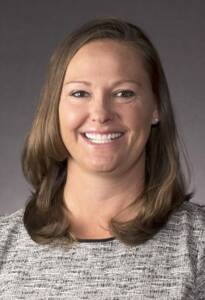 “I could not be more excited to lead the KU women’s golf program and bring my family to Lawrence,” Kuhle said. “I first would like to thank the search committee and specifically Travis Goff and Nicole Corcoran for providing me this once in a lifetime opportunity. The vision that Travis and Nicole have for this program along with their passion for KU women’s golf is inspiring and motivating. From day one, I was impressed with the energy and excitement of the people in athletics, their camaraderie, and plans to make this program great. The new golf facility and course, world class athletic facilities, residential living, campus life, and support and resources provided to student- athletes is top notch and I am confident this program will be a championship contender. I look forward to working with Jamie Bermel who has had great success here with the men’s team and cannot wait to help the players achieve success on and off the golf course.”

With Kuhle as head coach, Denver won 11 team titles and had 10 individual tournament victories, which included six conference championship medalists. While at DU, she was named conference coach of the year seven times, including this past season, in which DU ended the year ranked No. 39 by Golfstat/Golfweek. The Pioneers ended in the top 75 of the national rankings in all nine seasons with Kuhle at the helm.

Kuhle first joined the DU staff in 2005 and spent seven seasons with the program, including three as an associate head coach. In 2012-13, Kuhle served as an assistant coach at the University of Georgia before returning to DU for the 2013-14 season as the head coach.

Kuhle arrived at Denver to begin her coaching career after a successful college career at Tulane, where she was an all-conference performer all four years, including a first team selection as a sophomore. She was also named Tulane Female Scholar-Athlete of the Year in 2005.

A native of Littleton, Colorado, Kuhle earned her master’s degree in sport and performance psychology from the University of Denver in 2014 after earning a bachelor of science in management with a concentration in finance from Tulane in 2005.