📸 Through The Lens | Jordan Scott

Ask any casual Kansas track & field fan what they remember the most about former Jayhawk pole vaulter Jordan Scott. The response is sure to be “his colorful hair.” That is a given. Scott certainly set himself apart with an ever-changing hue to his tightly cropped hair. As you can see in Scott’s gallery of images, those vivid looks were good to me.

If you think Scott was a peacock strutting around the vault area, you would be wrong. As brilliant as the hair might be, Scott’s personality was colored richly warm. He was always amiable and willing to work with me for the best possible photographs. Scott proved to be a thoughtful person filled with interest in all that I did. Scott seemed to be the one that wanted to please me. That led me to work even harder to please him. For that I am always grateful.

Yet, when the time came to lift his pole out of the rack, chalk up and set himself for a sprint down the runway, the look on his face always said there was a heart stoked to full-on burning red as he powerfully arced the pole and sailed to great heights.

Among Scott’s palette of colors, one stands out over all the rest. That would be gold. Scott finished his career with seven Big 12 indoor and outdoor titles as he finished his career in the spring of 2011. He proved to be a fierce competitor willing to battle through every circumstance thrown at him.

On a chilly and rainy day in Eugene, Oregon, Scott overcame a start-and-stop of the competition to sail to the NCAA Outdoor Track & Field Championship in June 2010. As the sky darkened, only die-hard vault fans, coaches and family remained inside Hayward Field. Scott became only the second Jayhawk vaulter to win the national outdoor title.

A series of bewildering events made the competition leading to Scott’s title a testimony to his endurance. Tom Hays, Kansas’ associate head coach – vertical jumps, has seen just about everything that can happen during his long and distinguished career. He has coached four national champions and 21 Big 12 champions during his 16 years at KU. Nothing tops Scott’s incredibly long day in Eugene, though.

“Jordan was the biggest, baddest guy on the planet during that NCAA Championship,” Hays told me recently.

First, officials failed to raise the bar for the second round of vaults. Scott had yet to enter the competition. The decision was made to restart the event resulting in a 90-minute delay. By the time Scott readied for his first vault, 2 ½ hours had passed. Then it began to rain.

Officials continued the competition in the light rain. As Scott ran down the runway for his first attempt, the rain’s intensity increased. Scott needed this height since anything could and did happen. 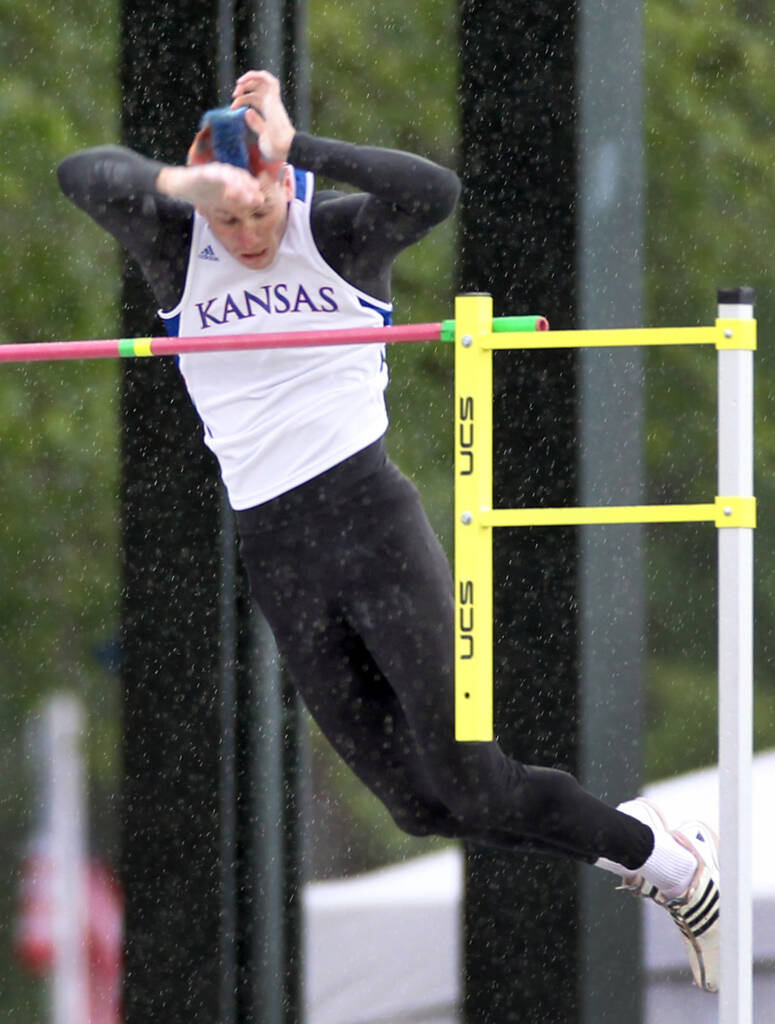 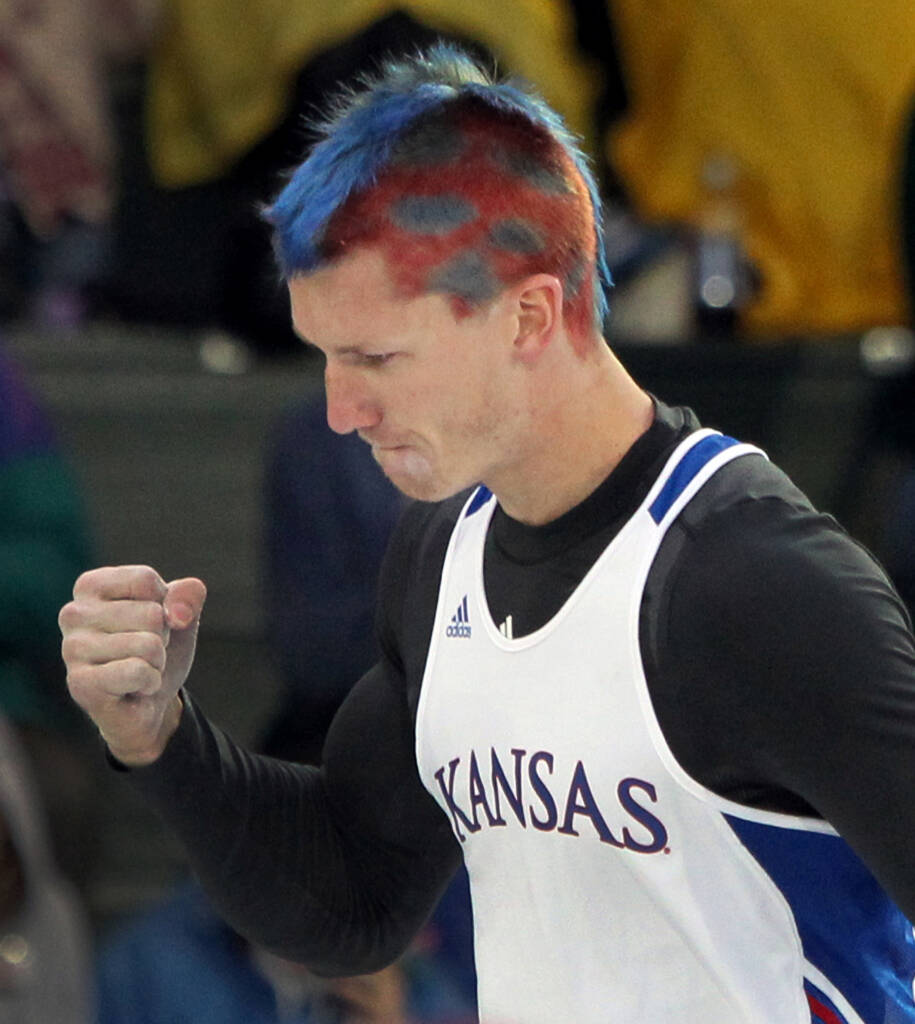 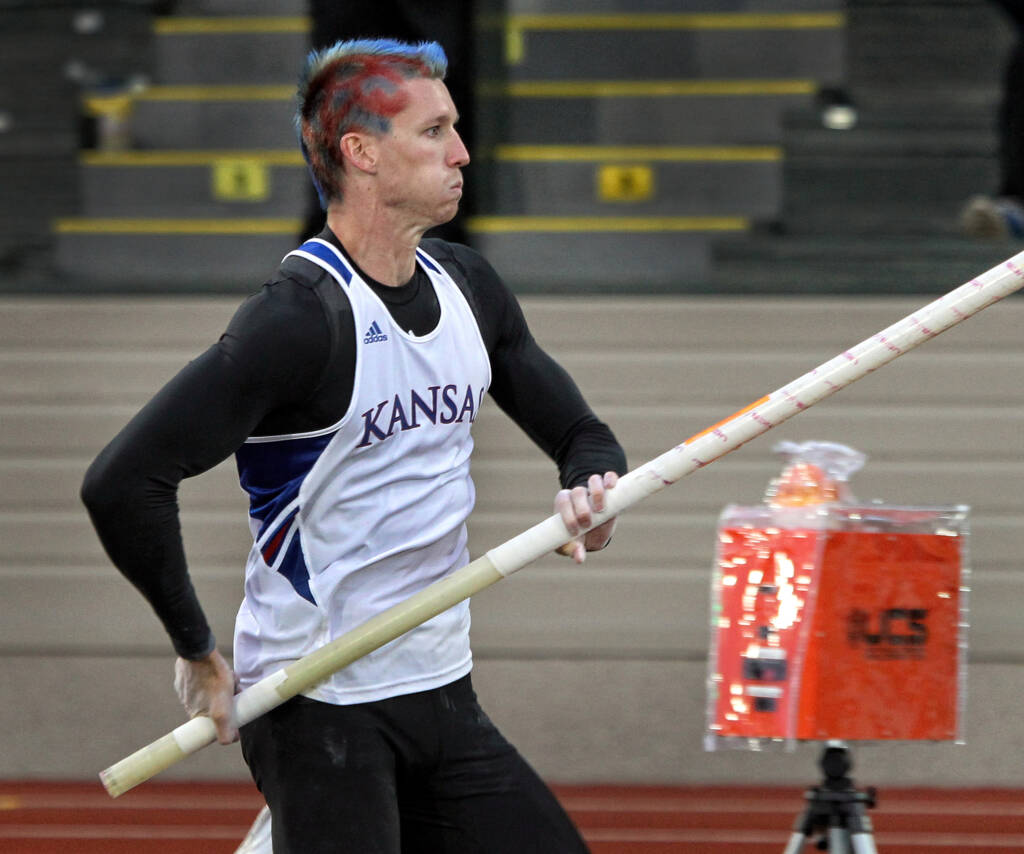 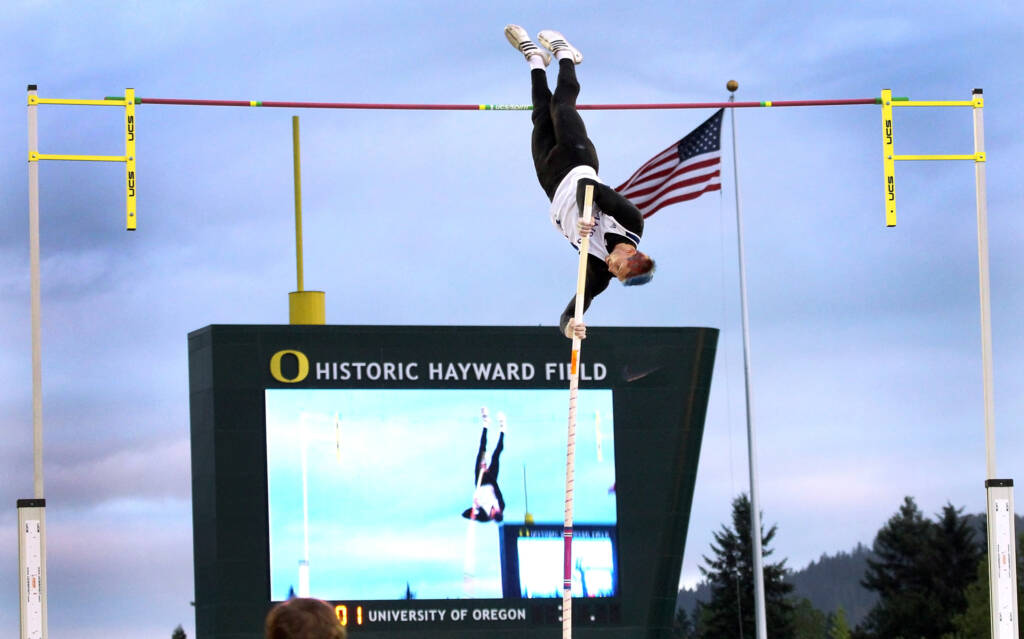 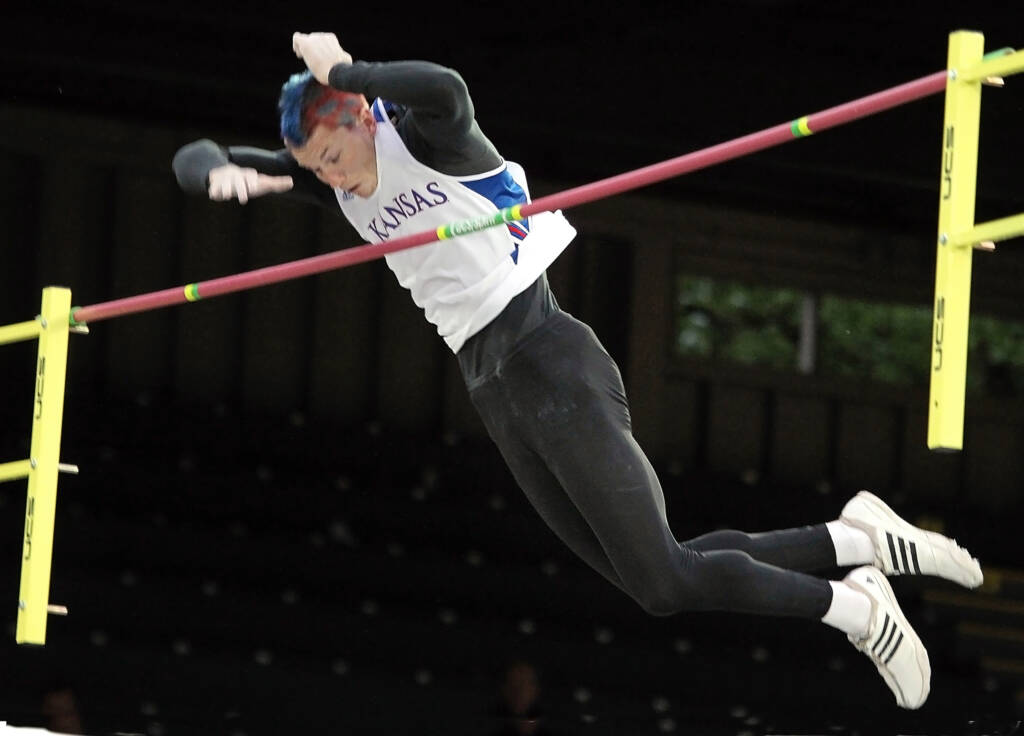 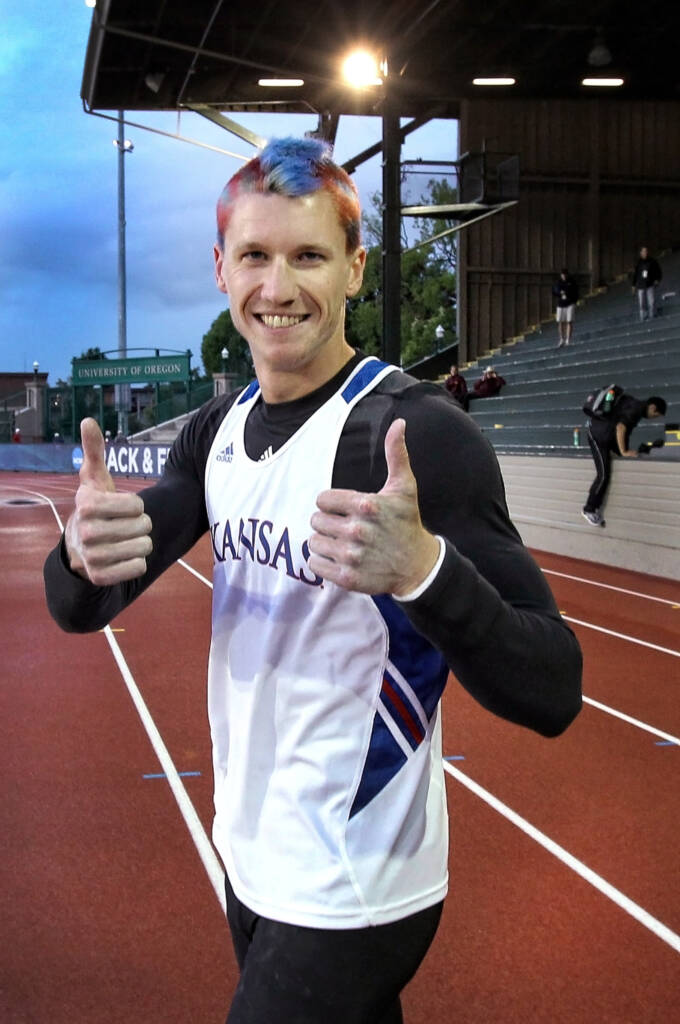 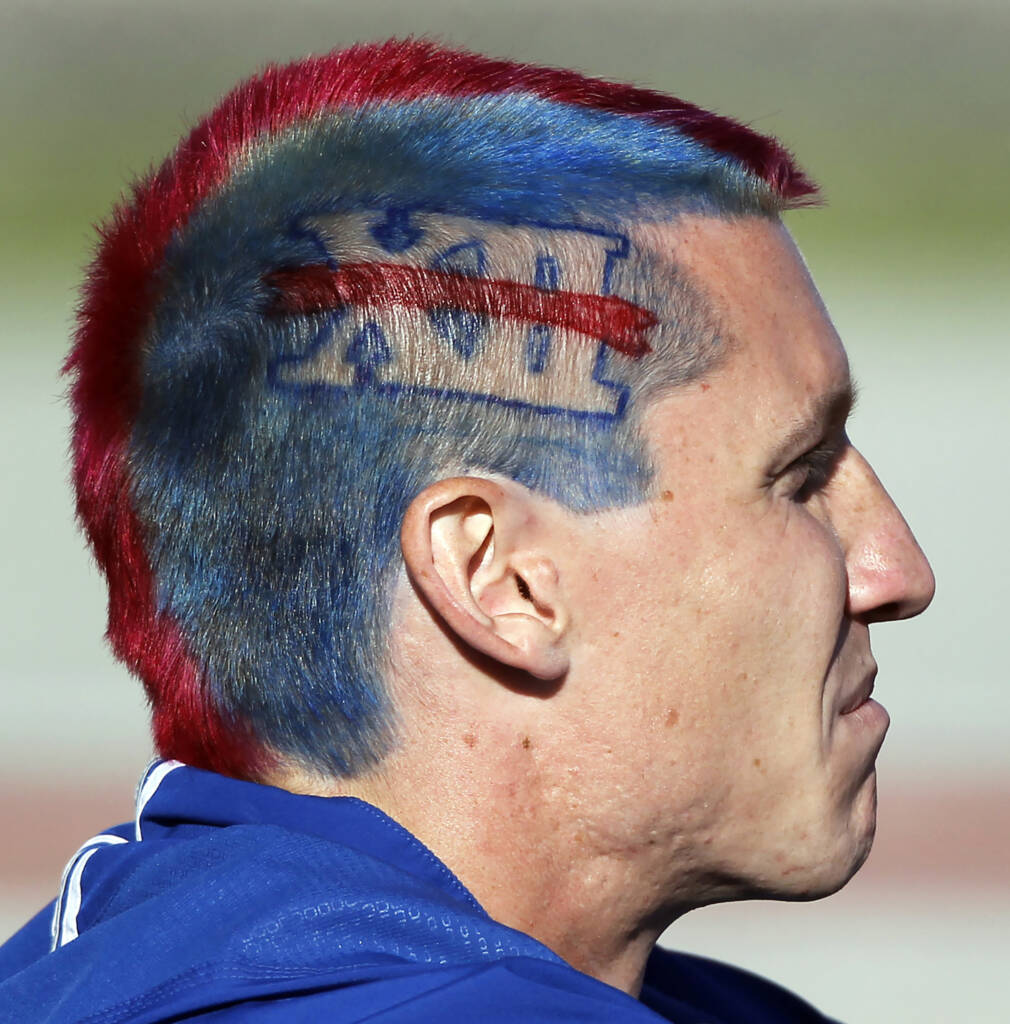 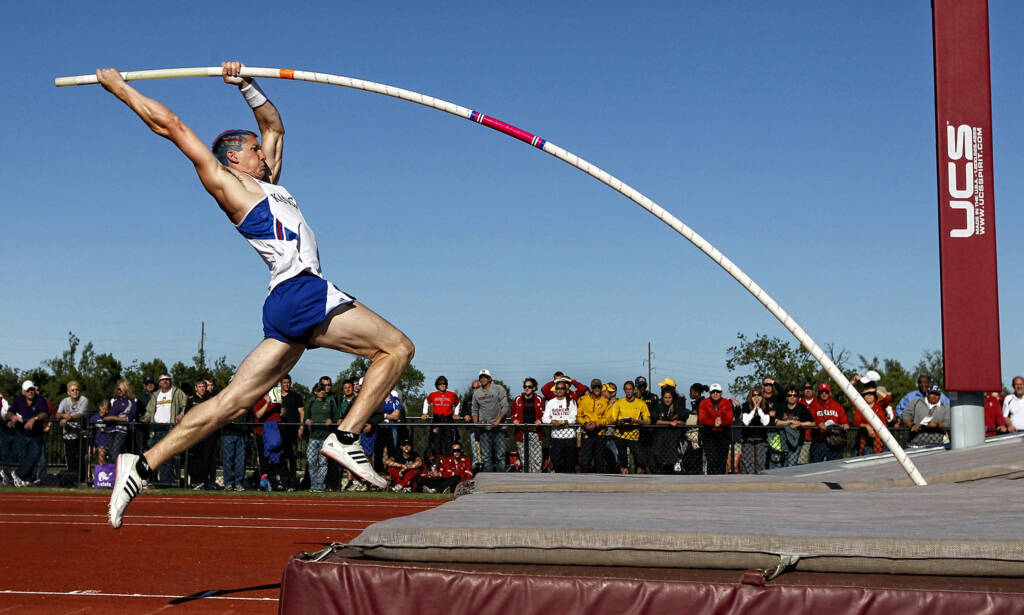 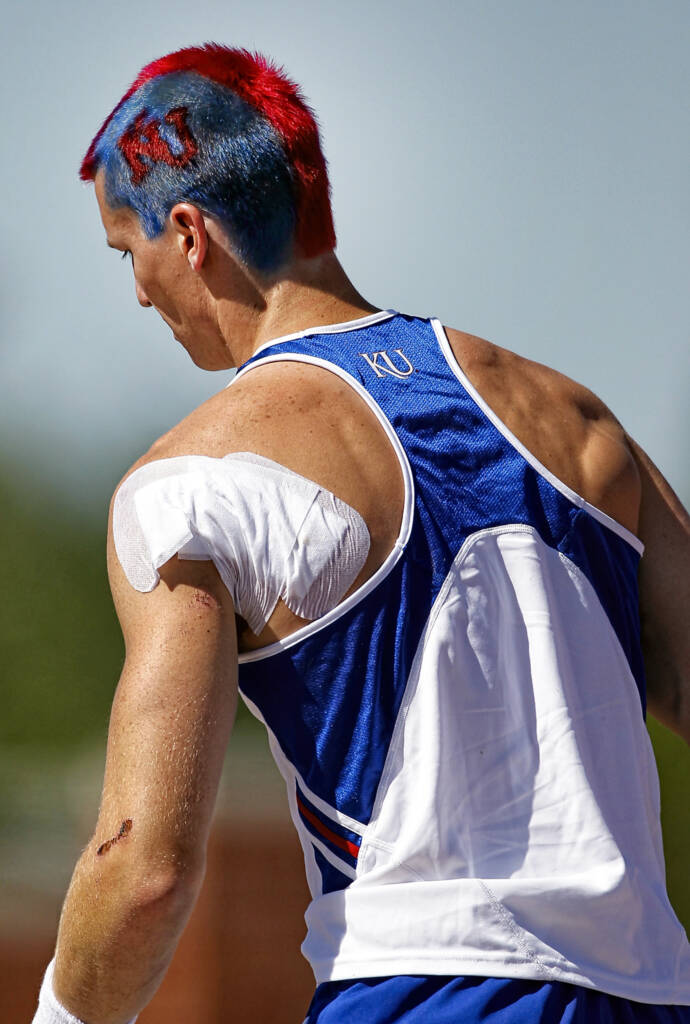 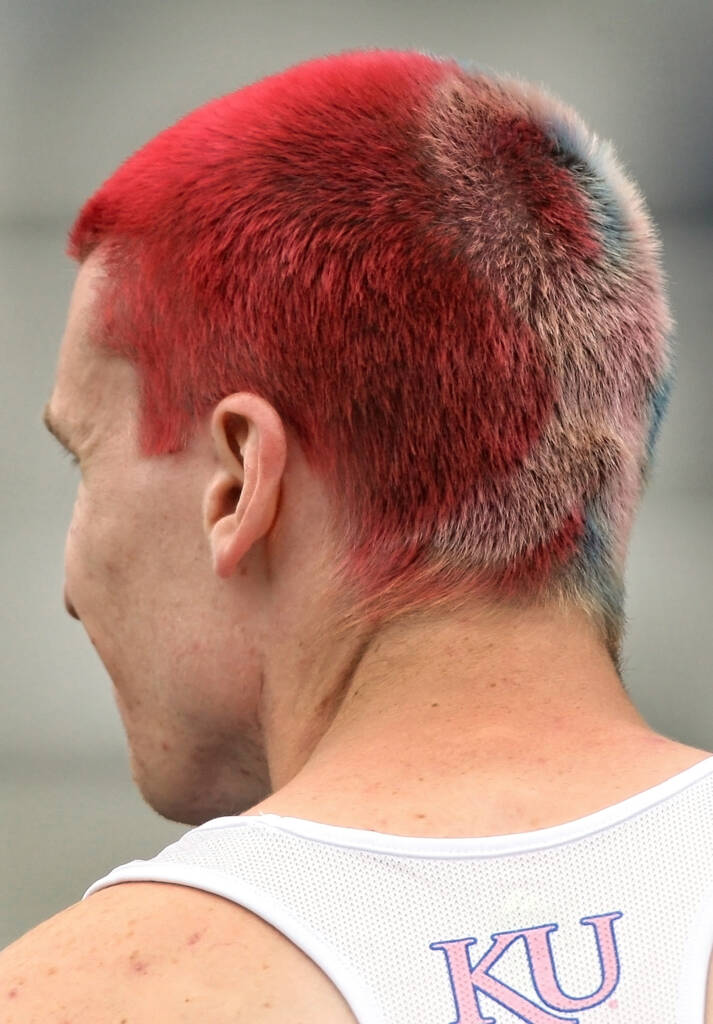 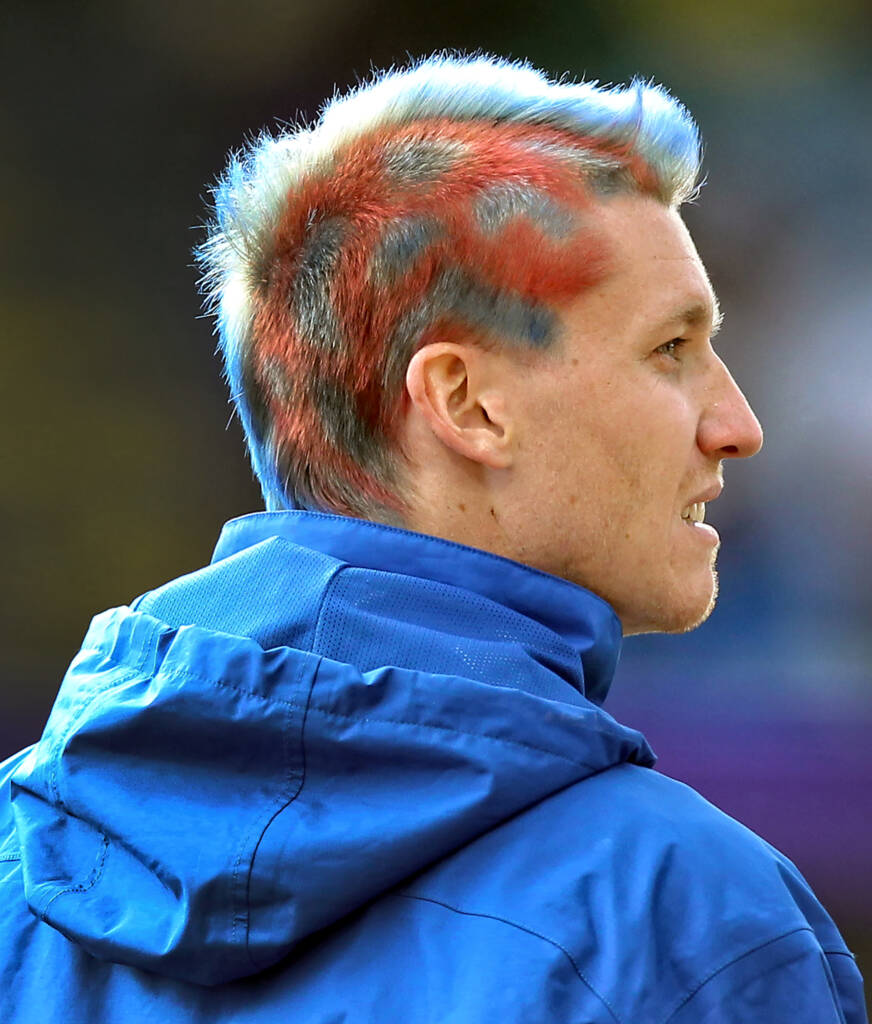 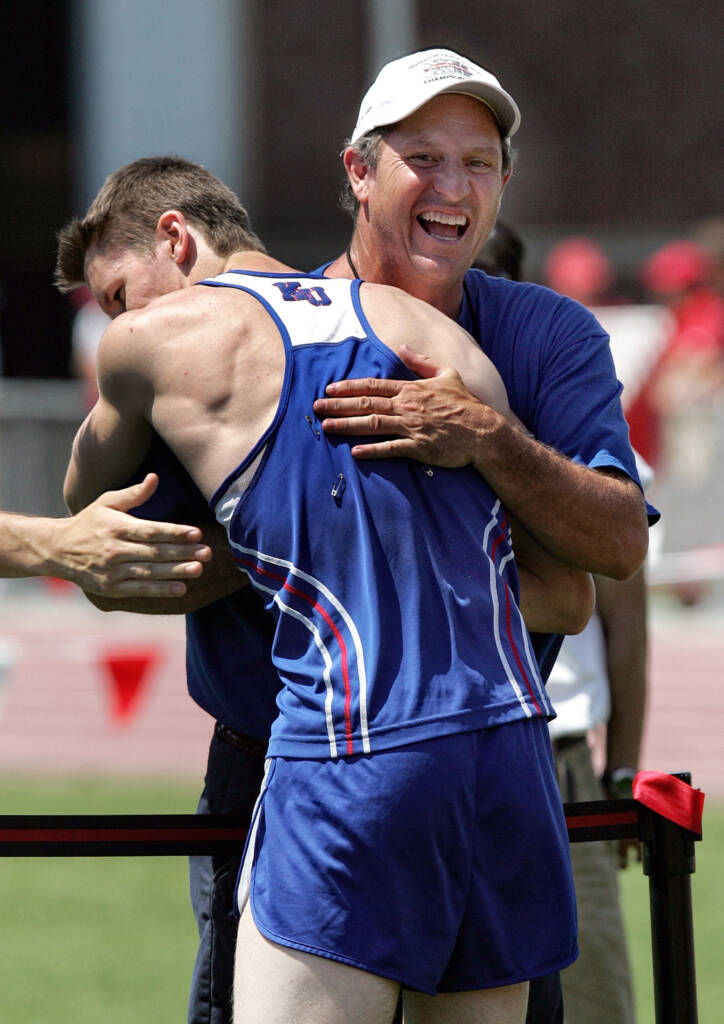 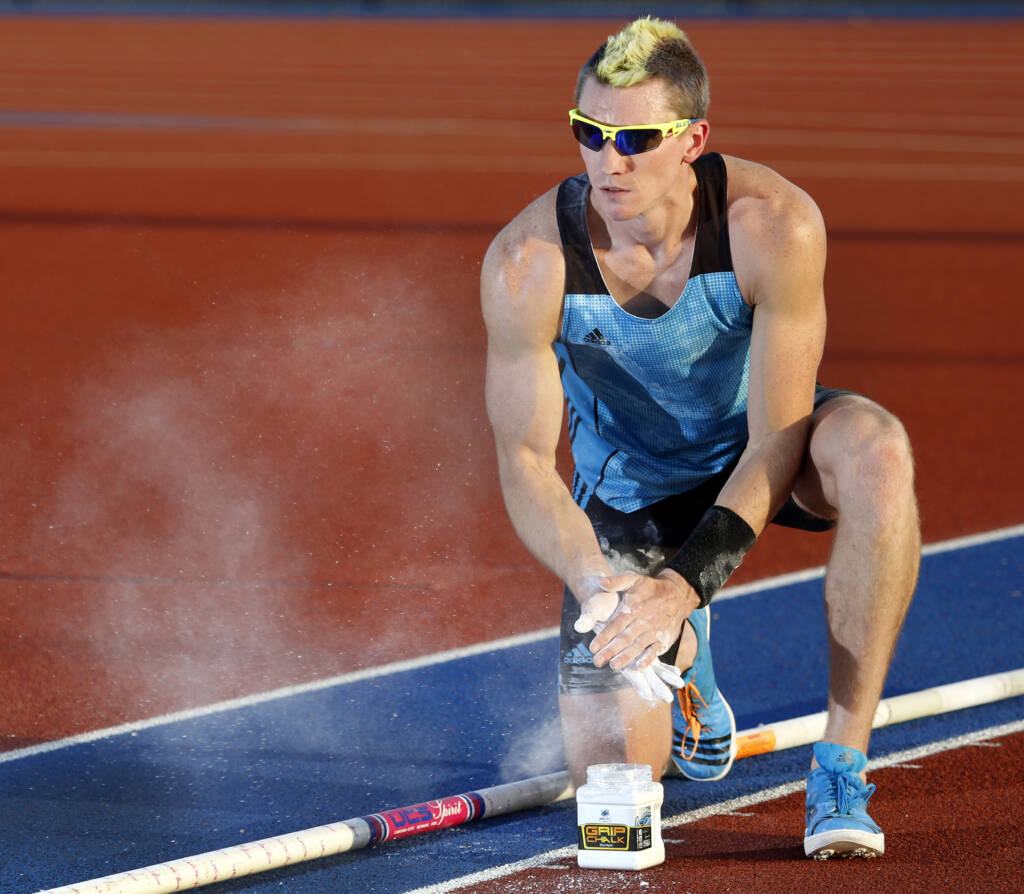 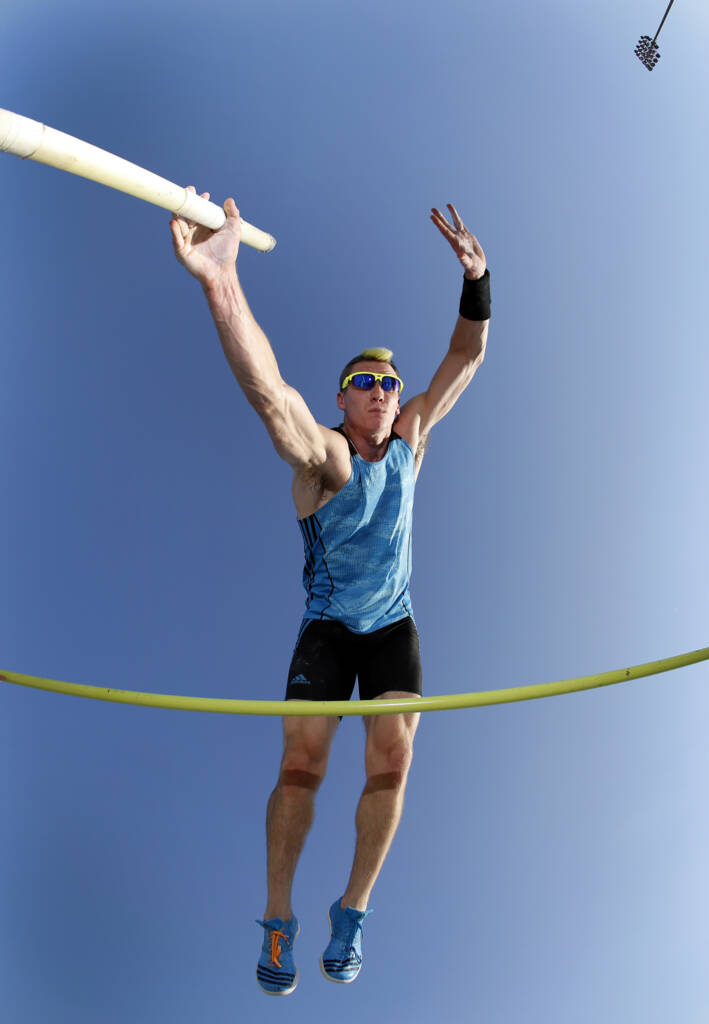 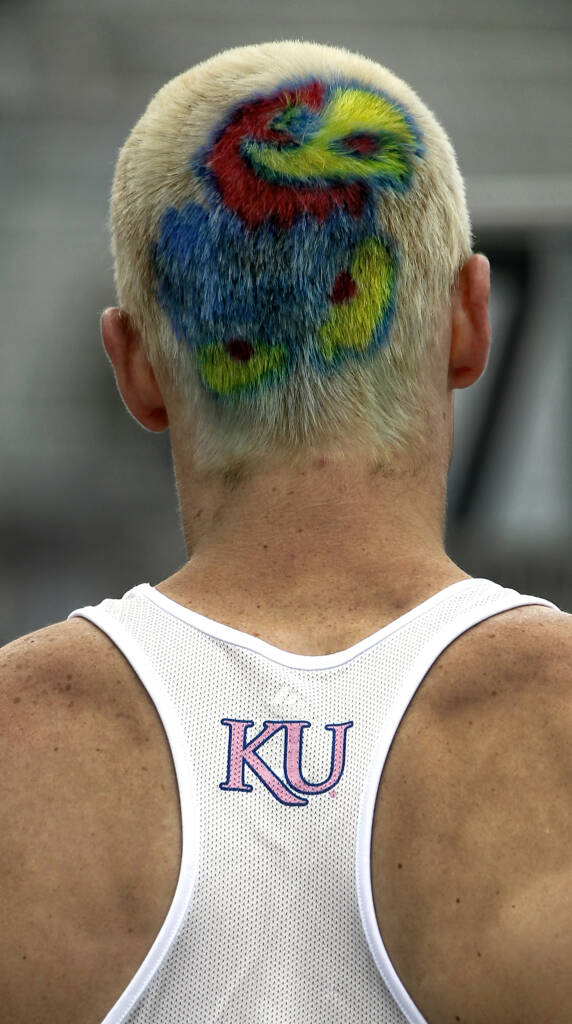 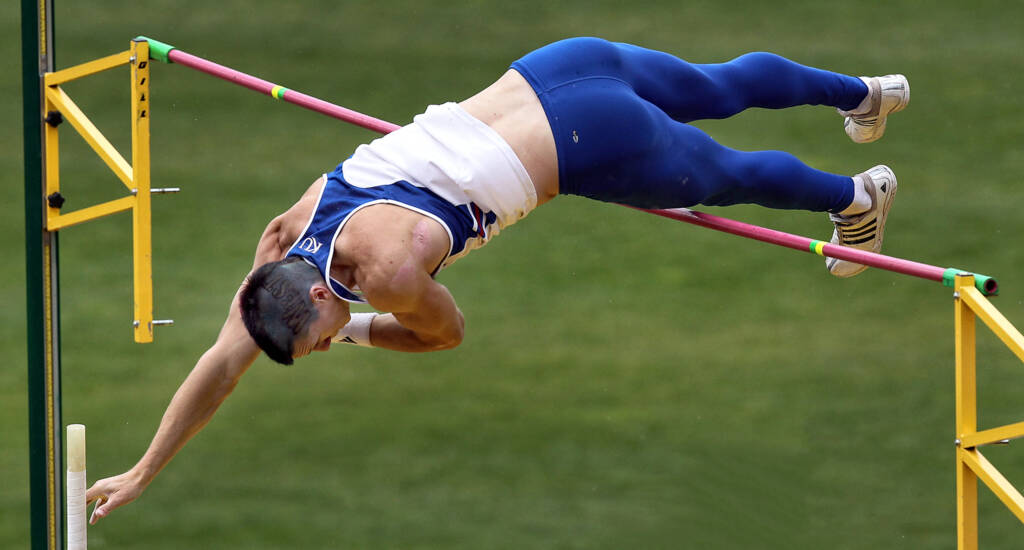 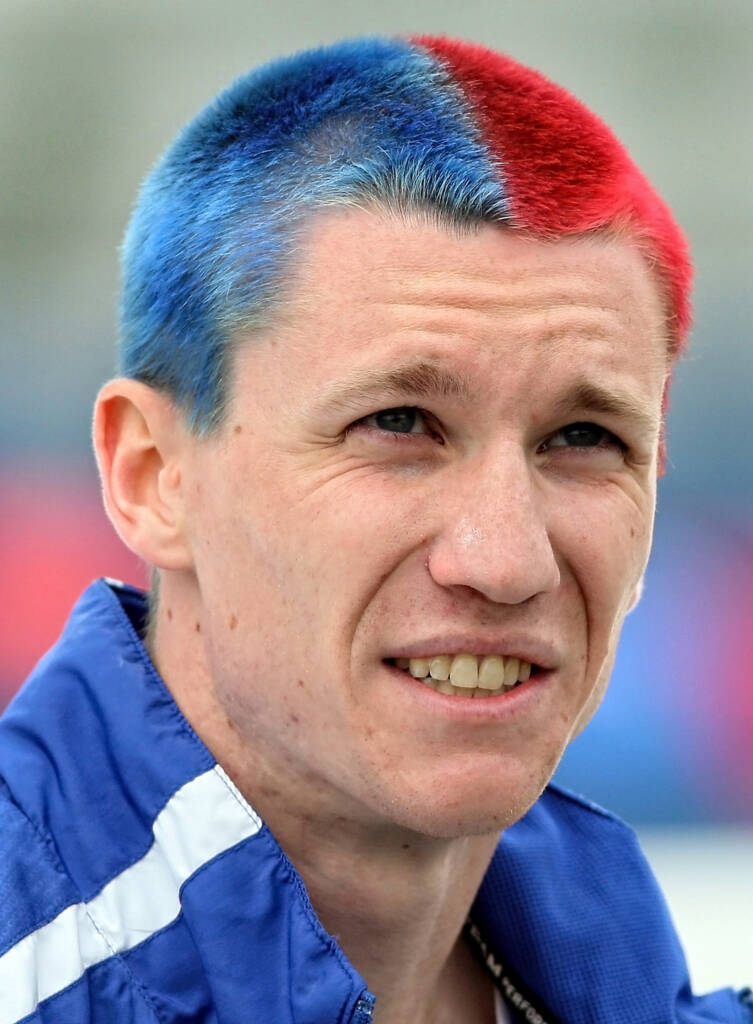 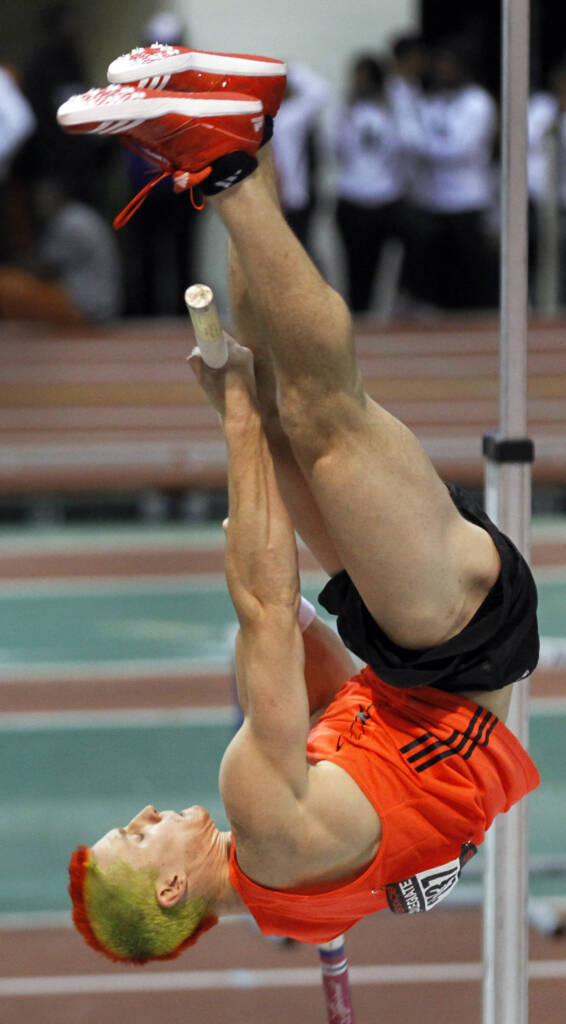 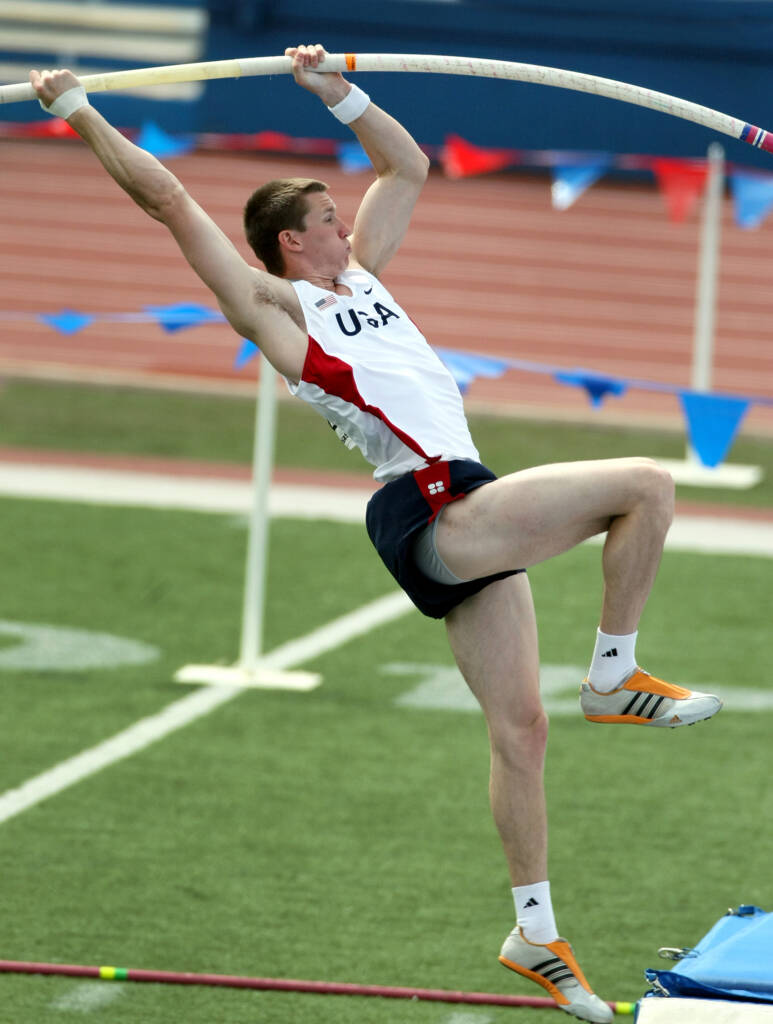 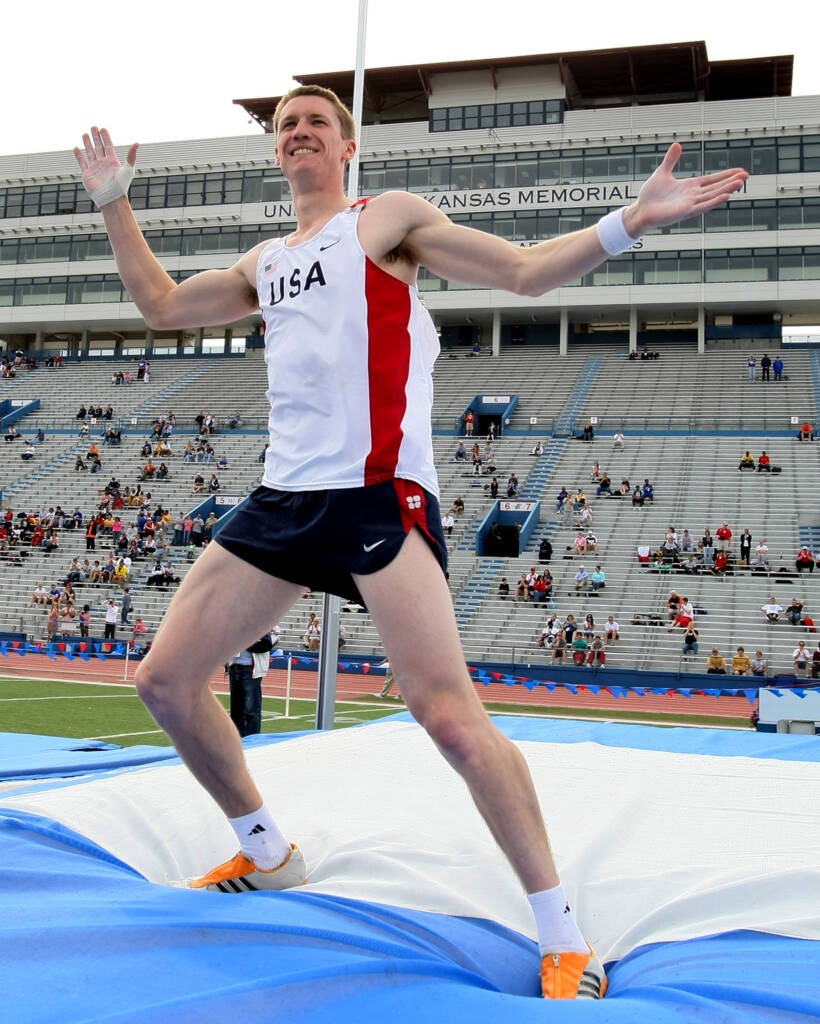 “The funny thing was that after the meet, Jordan told me he could not see the box the last couple of steps,” Hays said about the box where the pole is planted to start the ride skyward. “He was going to make that because he did not think he would get another.”

As Hays continued to recount the events, his pride began to shine as he boldly emphasized his words.

“Did I tell you he made that jump? HE MADE THAT JUMP!”

Another rain delay and an additional 45-minute warmup followed. One by one, the competition wilted. Over six hours after the event commenced, with one final clearance of 5.40m (17-08.50 ft.), Scott was the victor.

As for the colored hair? Scott debuted the neon look in the spring before his national championship at the Texas Relays in April 2010. Unbeknownst to the team and coaches, Scott arrived at the track with a look sure to stand out.

“The rock star was born,” Hays said. “My only words to Jordan were, ‘If you are going to look like that, you better jump high.’”

Scott did. He cleared a height of 5.42m (18-08.75 ft.). The Austin American-Statesman showcased a photograph of Scott the next day with a caption – “Hair today. Gone Tomorrow.”

The man of many colors was not gone the next day nor for years to come as a Jayhawk and professional vaulter.

“Jordan achieved what very few do,” Hays recalled. “He set the bar that Jayhawks are still trying to live up to today.”