Recognized as the first stadium built on a college campus west of the Mississippi River, David Booth Kansas Memorial Stadium is the seventh oldest collegiate stadium in the nation as Kansas prepares for its 101st season of football. Located at the north base of Mt. Oread at 11th and Maine streets in Lawrence, it has a capacity of 47,000.

In recent years, the stadium complex has been the focus of major renovations with more than $30 million in improvements completed.

Construction projects at the stadium have touched on improvements for fans, players and coaches in all areas of the complex:

David Booth Kansas Memorial Stadium is dedicated to the University of Kansas students who fought and died in World War I.

After playing its first two years of intercollegiate football (1890-91) in old Central Park on Massachusetts Street, Kansas built its first football field in 1892. It was called McCook Field and was named for Colonel John McCook who donated $2,500 to trigger a building fund drive.

Like most stadiums of those early days, it was nothing more than a set of wooden stands bordering each side of the field. It was laid out east and west on a site adjacent to the present David Booth Kansas Memorial Stadium. In fact, the horseshoe of David Booth Kansas Memorial Stadium covers much of old McCook Field. The east end zone of the original field was 400 feet from Mississippi Street and was bounded on the south by McCook Street. At that time McCook Street extended from Mississippi to Maine Street cutting directly through the present-day stadium.

Kansas played its first game on McCook Field on Oct. 27, 1892, defeating Illinois, 26-4. Kansas continued to compete at McCook Field until 1920 when Jayhawk fans, students and faculty began a drive for a new facility. The idea of a new stadium came on the heels of a 20-20 tie with Nebraska at McCook Field in 1920. 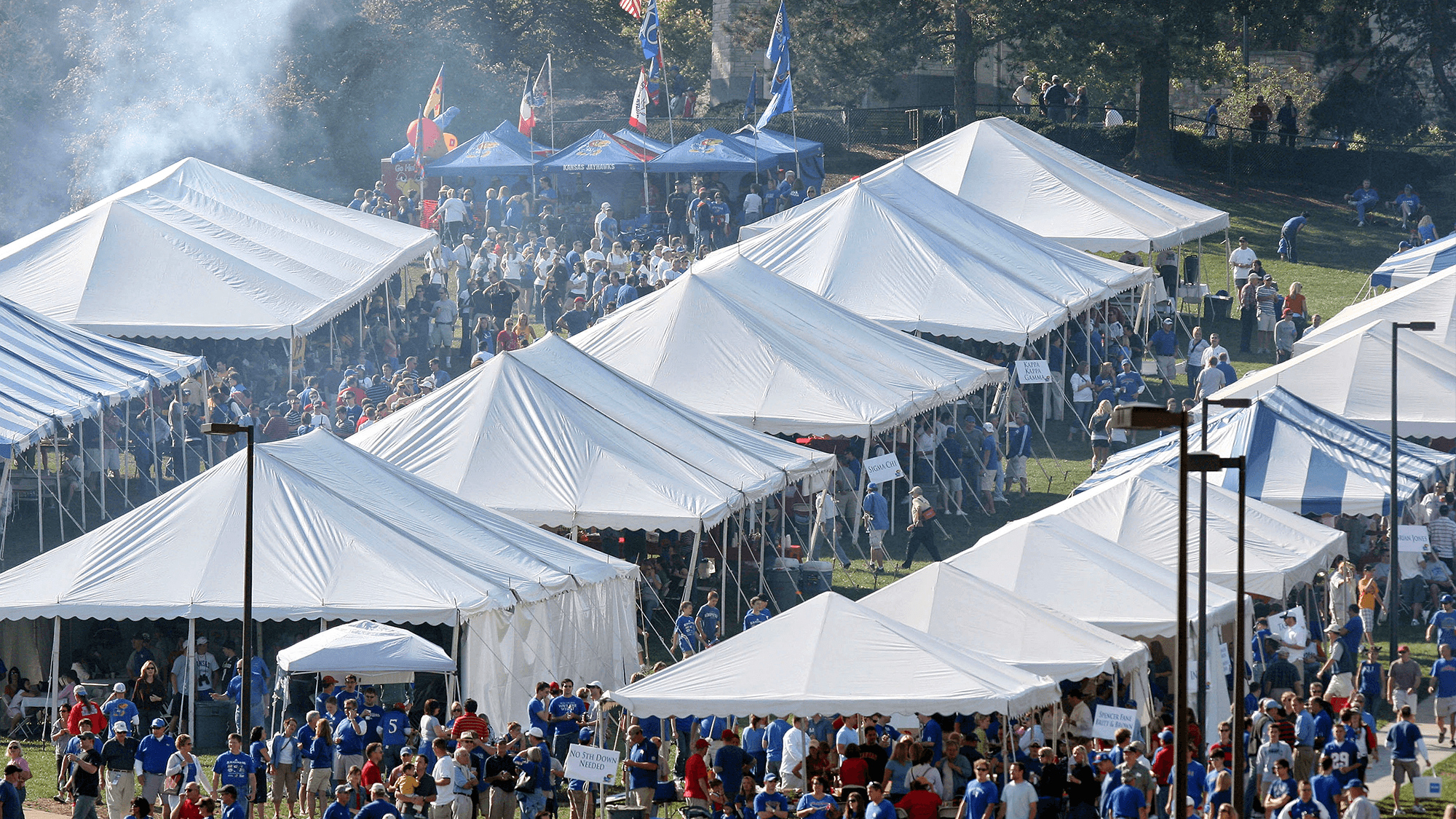 Coaching in what would be his first and only season, Dr. F.C. “Phog” Allen directed Kansas to the tie after trailing 20-0 at halftime. Although Allen would go on to gain greater fame as a basketball coach, the idea to build a new football stadium was just one of his many innovations at Kansas.

On the Monday following the game, fans, students and faculty gathered to celebrate the comeback. In mass, more than $200,000 was pledged to build a “modern” concrete structure. Allen envisioned a horseshoe shaped stadium, and, under his direction, construction began immediately.

In 1925, the east and west sections were extended to the south. Today those additions house the home and visitor lockerrooms. On October 3, 1925, a record crowd of 20,640 watched Kansas defeat Oklahoma A&M, 31-3. In 1927, the north bowl was completed to increase capacity to 35,000. Kansas inaugurated the horseshoe with a 26-6 loss to Wisconsin.

In 1970, artificial turf replaced the natural grass playing surface. The stadium underwent a major renovation in 1978 totalling approximately $1.8 million. The first phase consisted of repairing concrete from the original construction. The original wooden seats were replaced with aluminum bleachers as well.

The interior of the stadium was also improved in that renovation. Included were new dressing and training rooms for both Kansas and its opponents.

Another phase of the renovation covered the pressbox. New booths for television and radio along with a new photo deck were installed at level eight. Expanded radio booths were built on level seven in addition to a complete refurbishing that included all three levels.
In 1987, the old south endzone bleachers were removed. Permanent bleachers were purchased in 1992 increasing the seating capacity to 50,250.

The third artificial surface in the stadium’s history was added during the summer of 1990 with the installation of an AstroTurf field. That new carpet lasted through the 1999 season. A new surface – known as AstroPlay – was put down just prior to the start of the 2000 season. In August of 2009 the surface was again updated as FieldTurf was laid on the field.

David Booth Kansas Memorial Stadium has also been host to a number of community, musical and athletic activities. It is the home of the prestigious Kansas Relays. The eight lane all-weather track was built in 1969, replacing the old cinder surface. In 1984, the track was resurfaced and new jumping pits were constructed. David Booth Kansas Memorial Stadium hosted the Big Eight Conference track and field championships in the spring of 1994.

FROM THE WEST (Forbes Field)

FROM THE SOUTHWEST (Wichita Mid-Continent Airport)