History of the Jayhawk
Mascots are believed to bring good luck, especially to athletic teams. Just about every college and university claims a mascot. The University of Kansas is home to the Jayhawk, a mythical bird with a fascinating history.

The origin of the Jayhawk is rooted in the historic struggles of Kansas settlers. The term “Jayhawk” was probably coined around 1848. Accounts of its use appeared from Illinois to Texas and in that year, a party of pioneers crossing what is now Nebraska, called themselves “The Jayhawkers of ’49”. The name combines two birds–the blue jay, a noisy, quarrelsome thing known to rob other nests, and the sparrow hawk, a quiet, stealthy hunter. The message here: Don’t turn your back on this bird.

During the 1850’s, the Kansas Territory was filled with such Jayhawks. The area was a battleground between those wanting a state in which slavery would be legal and abolitionists committed to a free state. The opposing factions looted, sacked, rustled cattle, stole horses, and otherwise attacked each other’s settlements. For a time, ruffians on both sides were called Jayhawkers. But the name stuck to the ‘free staters’ when Kansas was admitted as a free state in 1861. Lawrence, where KU would be founded, was a free state stronghold.

During the Civil War, the Jayhawk’s ruffian image gave way to patriotic symbol. Kansas Governor Charles Robinson raised a regiment called the Independent Mounted Kansas Jayhawks. By war’s end, Jayhawks were synonymous with the impassioned people who made Kansas a Free State. In 1886, the Jayhawk appeared in a cheer–the famous Rock Chalk Chant. And when KU football players first took the field in 1890, it seemed only natural to call them Jayhawkers.

How do you draw a Jayhawk? For years, that question stumped fans. Henry Maloy, a cartoonist for the student newspaper, drew a memorable version of the Jayhawk in 1912. He gave it shoes. Why? For kicking opponents, of course.

In 1920, a more somber bird, perched on a KU monogram, came into use. In 1923, Jimmy O’Bryon and George Hollingbery designed a duck-like Jayhawk. Around 1929, Forrest O. Calvin drew a grim-faced bird sporting talons that could maim. In 1941, Gene “Yogi” Williams opened the Jayhawk’s eyes and beak, giving it a contentious appearance. It is Harold D. Sandy’s 1946 design of a smiling Jayhawk that survives. The design was copyrighted in 1947. In 2005 the Jayhawk was reintroduced with the new KU Trajan font.

In the 1960s, the Jayhawk went 3-D when the KU Alumni Association provided a mascot costume. Welcome, Big Jay. In 1971, during half-time of Homecoming, a huge egg was hauled out to the 50-yard line, and fans witnessed the hatching of Big Jay’s companion, Baby Jay.

Today you’ll find several Jayhawks on the Lawrence campus. A piece of birdlike iconography on Dyche Hall, erected in 1901, looks suspiciously like a Jayhawk. In front of Strong Hall perches a large Jayhawk, a statue with sleek, modern lines, gift of the Class of 1956. Another, a striding, feathered bronze bird, greets visitors to the Adams Alumni Center.

School Colors
The University of Kansas colors, crimson and blue, used since the early 1890s, are not the colors originally adopted by the university Board of Regents in the 1860s. The regents had decided to adopt the Michigan colors, maize and sky blue.

Maize and blue were used at early oratorical meets, and they may have been used when Kansas competed in rowing in the middle 1880s. However, when football came upon the scene in 1890, the student backers wanted to use Harvard crimson as the athletic color in honor of Col. John J. McCook, a Harvard man, who had given money for an athletic field at KU. That field ran east and west in the proximity of where the north bowl of Memorial Stadium stands on the Kansas campus today.

Until that time, Kansas football games were played at Central Park on Massachusetts Street in downtown Lawrence. Some Yale men were on the faculty, and they demanded that Yale blue be included. The rooters rallied forth to follow crimson and blue on their team. No one fought to retain the original colors, and the vivid deeper tone crimson and blue became generally used. Finally, in May 1896, the KU Athletic Board adopted crimson and blue as the official team colors for the university.

The Fight Song
“I’m a Jayhawk,” written in 1912 by KU graduate George “Dumpy” Bowles, became popular with KU students in 1920. The lyrics remained unchanged until 1958, when slight revisions included rival schools in the Big Eight Conference. After longtime rivals Nebraska and Colorado in June 2010 announced plans to leave the Big 12 Conference, KU alumni asked the Alumni Association about adapting the lyrics after 50 years. Future conference changes will not automatically dictate further changes to the lyrics.

The songwriting contest’s winning entry, authored by Matt Schoenfeld, talks about the Sooners, the Cowboys and the seven other rivals that remained in the changing Big 12 Conference. A panel of judges selected Schoenfeld’s rendition from six finalists. His lyrics alter the first verse and one line of the chorus:

Talk about the Sooners, Cowboys and the Bears,
Aggies and the Tiger and his tail.
Talk about the Wildcats, and the Cyclone boys,
But I’m the bird to make ’em weep and wail.

Listen to the fight song!

“I’m A Jayhawk”
by George Bowles

Rock Chalk Chant
The Rock Chalk Chant has been the battle cry of KU fans for over 100 years. This strange, traditional chant, which is among the most famous of all college cheers, was started by E.H.S. Bailey, a professor of chemistry.

Bailey wanted a cheer for his Science Club. Returning from a convention in Wichita, Bailey and some associates patterned the yell after the rhythmic cadence of their train rolling along the tracks. On May 21, 1886, Bailey submitted the cheer to his club. Originally, the chant was “Ray, Rah, Jay Hawk, K.U.” repeating the words three times. This yell was used by the science club the next year and there were frequent allusions to “The Science Club Yell” in the student newspapers

An English professor suggested that “Rock Chalk” be substituted for “Rah, Rah” because it rhymed with Jayhawk and because it would be symbolic of the chalky limestone formations found on Mount Oread.

The chant was adopted as the college yell after the state oratorical contest in Topeka in 1886 because KU student yells for the winners were enthusiastic, but unorganized. By the Fall of 1887 the yell was known as the official yell of the school as the student newspaper reported on November 4, 1887,

“Every college of importance in this country has a college cry. In every town in which a college is situated, the midnight air resounds with the hideous yells of the student, symbolic of victory, defeat, or devilment. The students of the University of Kansas use their yell but little and it is only amidst great victory that “Rock-chalk-Jay-Hawk, K-U-U-U floats throughout the midnight air reminding one of a band of Apache Indians.”

By 1889 the form of the cheer had changed to the drawn-out cadence repeated twice, followed by three staccato repetitions.

Listen to the chant! 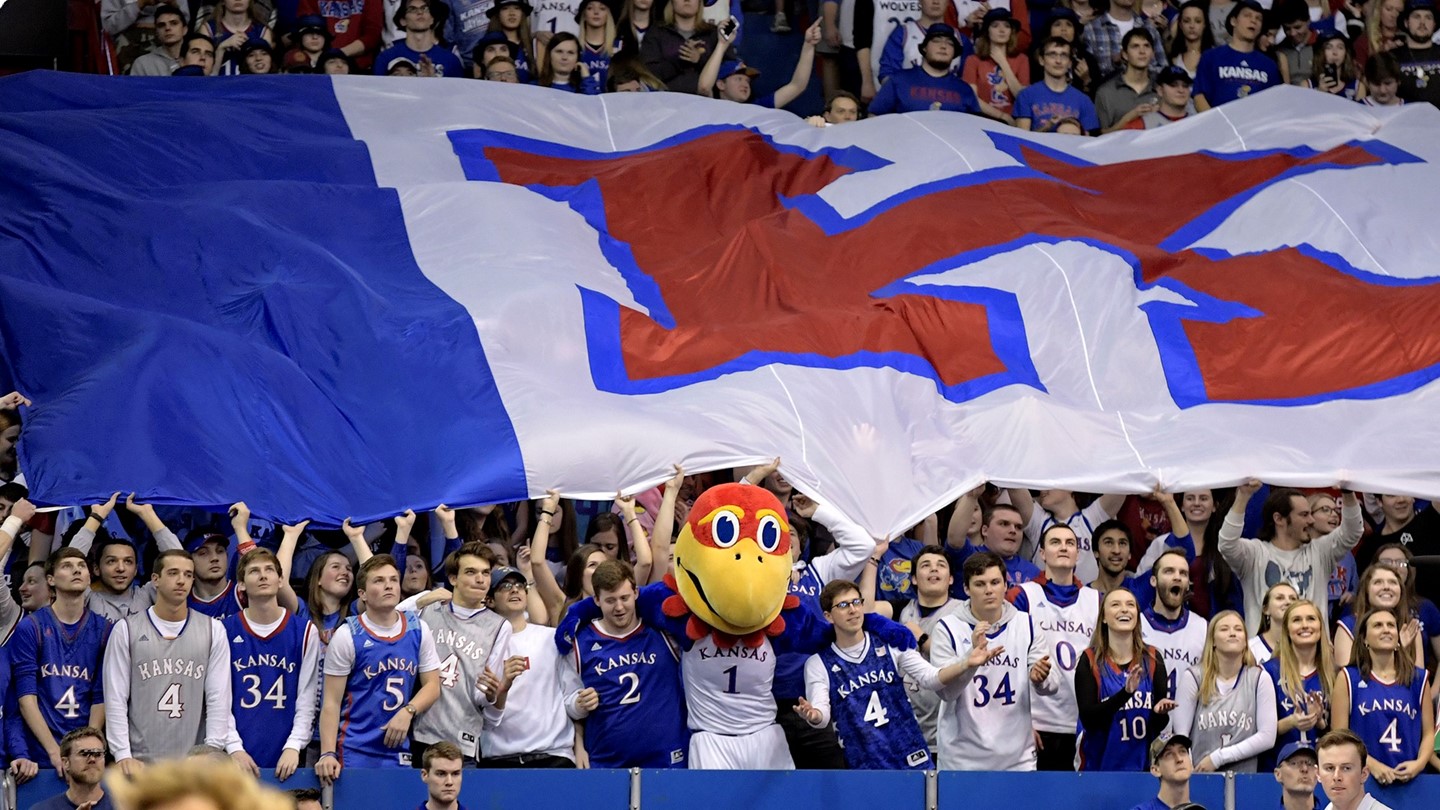 Alma Mater – “Crimson and the Blue”
Far above the golden valley
Glorious to view,
Stands our noble Alma Mater,
Towering towards the blue.

Lift the chorus ever onward,
Crimson and the Blue
Hail to thee our Alma Mater
Hail to old KU.

Far above the distant humming
of the busy town,
Reared against the dome of heaven
Looks she proudly down

Greet we then our foster mother,
Noble friend so true,
We will ever sing her praises
Hail to old KU