LAWRENCE, Kan. – Kansas women’s basketball (6-7, 2-5 Big 12) plays the second game of a back-to-back series against Oklahoma State Feb. 2 at 6:30 p.m. in Stillwater, Oklahoma, in Gallagher-Iba Arena. In the previous meeting between the two schools on Jan. 30, OSU earned the 75-51 victory.

The Jayhawks last played on the road in the state of Oklahoma against the Sooners Jan. 27, falling to OU, 84-81. In the loss, Tina Stephens logged her second-consecutive game with double-figure points (19), while recording a double-double with 10 rebounds. Stephens was joined by Ioanna Chatzileonti (14 points), Brooklyn Mitchell (13) and Aniya Thomas (10) in double figures. Prior to the game at OU, Stephens logged a career-best 22 points against Kansas State Jan. 23.

Holly Kersgieter continues to lead the Kansas attack, boasting a team-high 15.3 points per game, while adding 6.4 rebounds, which ranks second on the team. Against Oklahoma State, she tallied her 10th game this season with 10-or-more points, and finished with a team-best 12 points.

Stephens joins Kersgieter as the only two Jayhawks to average double-digit points, recording 12.2 points on 55-for-100 shooting. Stephens also grabs 6.2 rebounds per game and is second on the team in steals (16). Chatzileonti is the team leader in rebounds per game (7.8) and blocks per game (1.55). Against Oklahoma State, she added six points and four rebounds. 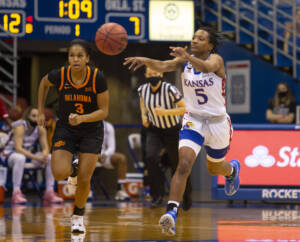 OPPONENT PREVIEW: OKLAHOMA STATE
Oklahoma State enters Tuesday’s Big 12 clash with a 12-5 record and 8-3 mark in conference play. The Cowgirls enter the second game of a back-to-back with Kansas on a three-game winning streak, earning all-three wins with a point-margin of 14-or-more points.

OSU is led by Natasha Mack, who has started all 17 games for the Cowgirls and was recently named to the Naismith Women’s Defensive Player of the Year Watch List. Mack was one of three Big 12 nominees and one of 15 in total. Mack is averaging team bests in points per game (19.0), rebounds per game (11.9) and blocks (71). Against Kansas Jan. 30, she finished with 21 points, 16 rebounds, six blocks and four steals.

Ja’Mee Asberry joins Mack in the double-digit point club, averaging 16.6 points per game. Asberry leads Oklahoma State in average minutes played (35.1), while boasting a team-high .417 three-point field-goal percentage on 40-for-96 shooting. The duo of Mack and Asberry have started all 17 games this season.

BACK-TO-BACK
Kansas and Oklahoma State will play back-to-back after the Cowgirls visited Lawrence Jan. 30 and the two Big 12 schools are slated to play Feb. 2 in Stillwater, Oklahoma. The last time Kansas played a single opponent in back-to-back games was the 2015-16 season against TCU. KU played at TCU Feb. 29 and played the Horned Frogs March 4 in the Big 12 Championship tournament. KU won the second game 81-64.

UP NEXT
Kansas continues its road trek, heading to Waco, Texas to face Baylor Thursday, Feb. 4 at 7 p.m., on the Big 12 Now on ESPN+.