The Jayhawks played at Texas and TCU, Jan. 14 and 17, respectively, dropping both contests on their Texas road trip. KU nearly earned the victory over the Horned Frogs, forcing overtime and dropping the game, 81-78.

Holly Kersgieter continues to lead the charge for Kansas and has a team-high 17.1 points per game. Kersgieter has led KU in its previous two contests in scoring, while moving into second place on the team in rebounds per game (6.6). She led Kansas at TCU Sunday, Jan. 17, posting 16 points with nine rebounds, while adding four assists. Four other Jayhawks reached double figure points, including Tina Stephens with 10 points off the bench. Stephens also wrangled five rebounds and finished 4-of-6 from the field. 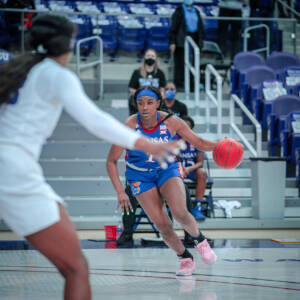 OPPONENT PREVIEW: TEXAS TECH
Texas Tech opened the season with a pair of wins over UTRGV and Houston Baptist before canceling its game with Vanderbilt. The Red Raiders dropped a contest to Rice before beating Angelo State. TTU added its second cancelation of the season against Missouri, before falling to then-No. 7/7 Baylor. The Red Raiders rebounded, winning their next three before dropping four-straight against Big 12 foes. TTU broke its losing streak with a victory over then No. 21/20 Texas in its last game Jan. 17.

Texas Tech is led by Vivian Gray, who is its team leader in points (20.1 per game), blocks (19), rebounds (8.2 per game) and assists (40). Gray tallied a double-double against Texas, finishing with 24 points and 13 rebounds. Lexi Gordon is the only other Red Raider to average double-digit points this season, netting 17.6 points per game to go along with 68 total rebounds.

JAN. 18, 2020 AGAINST TEXAS TECH
In the first meeting between Texas Tech and Kansas last season, the Jayhawks earned their first Big 12 victory of the season, 67-50. Four Jayhawks finished in double figures with Holly Kersgieter (10 pts) and Tina Stephens (14) points leading the charge from the bench. Zakiyah Franklin earned the start and finished with 10 points and a team-high five assists.

ENTER THE STARTING LINEUP
Mia Vuksic and Chisom Ajekwu made their first career starts in a Kansas uniform against No. 21/20 Texas Jan. 14. The duo earned their second pair of starts at TCU Jan. 17. Ajekwu nearly claimed a double-double against the Horned Frogs, collecting 10 points and nine rebounds.

UP NEXT
Kansas hosts Kansas State Saturday, Jan. 23 at 4 p.m. for the Dillons Sunflower Showdown in Allen Fieldhouse. The game will be broadcast on the Big 12 Now on ESPN+.