LAWRENCE, Kan. – Kansas Women’s Basketball (7-9, 3-7 Big 12) hits the road for a two-game swing this week. The Jayhawks first head to Morgantown, West Virginia to tangle with the Mountaineers before a Saturday Dillons Sunflower Showdown game at Kansas State.

The Jayhawks will head out on the road on a good note after topping TCU by 10 at Allen Fieldhouse on Sunday. Tina Stephens had a game-high 20 points in the win on 6 of 10 shooting from the floor She was also near-perfect at the line, converting eight of nine attempts. She also added seven rebounds and three blocks. Freshman Ioanna Chatzileonti, meanwhile, had a career-high 17 points and added 10 rebounds to collect her second double-double this season. It also marked the fifth time this season she collected 10 or more rebounds in a game.

Additionally, Holly Kersgieter poured in 15 points in 34 minutes against the Horned Frogs as she continues to be a catalyst for the Jayhawks. Kersgieter leads the team with 15.7 points per game in 28.2 minutes per contest. She’s second on the team in rebounds, assists and steals as well, continuing a strong all-around sophomore campaign.

Kansas scored 57 points in the second half against TCU, which is the most points Kansas has scored in a second half this season. The Jayhawks’ previous high was 48, set twice.

The Jayhawks now turn their attention to West Virginia, ranked No. 19 in this week’s AP Top 25 and No. 21 in the Coaches Poll. 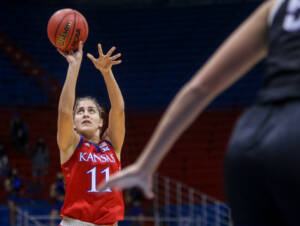 OPPONENT PREVIEW: WEST VIRGINIA
The Mountaineers enter Wednesday’s game with a 15-2 mark overall and a 9-2 record in the Big 12, while riding a current 10-game winning streak.

Kysre Gondrezick leads the team and is fourth in the Big 12 in scoring at 21.6 points per game. She is also tops in assists with 71 in 15 games. She shoots 38 percent from 3-point range and 78 percent from the line.

Esmery Martinez is second on the team with 13.7 points per game, while also leading the team in rebounding at 11.9 boards per game. She’s third in the conference at that mark. Kirsten Deans (11.8) and Madisen Smith (10.0) also average in double figures for the Mountaineers. At home, West Virginia is 9-1 on the year.

UP NEXT
Kansas continues its road trek, heading to Kansas State for the second game of the 2020-21 Dillons Sunflower Showdown Series. The game is slated for Saturday, Feb. 13 at 1 p.m., and will be broadcast on the Big 12 Now on ESPN+.