LAWRENCE, Kan. – Kansas Women’s Basketball (6-9, 2-7 Big 12) will return to Allen Fieldhouse on Sunday to host TCU at 1:30 p.m. The two teams hooked up for a thriller earlier this season with the Horned Frogs barely outlasting the Jayhawks 81-78 in overtime.

The Sunday game is also the Jayhawks For a Cure game and fans are encouraged to wear pink.

Kansas enters Sunday’s matchup coming off a pair of road games this past week at Oklahoma State (Tuesday) and No. 8 Baylor (Thursday). The Jayhawks returned home to Lawrence following the hectic week and matchup with the Lady Bears to prepare for Sunday’s game with TCU.

Holly Kersgieter continues to lead the way for the Jayhawks this season. She has started all 14 games she’s played in and is averaging a team-best 15.8 points per game on the season. She’s also second on the squad in rebounding with 6.3 boards per game.

She is coming off one of her best games of the season against Baylor on Thursday. Against the Lady Bears, Kersgieter had 21 points, which tied her season high. She also connected on three 3-pointers, which tied her season high for a conference game. Kersgieter has scored in double digits in all but one game this season for the Jayhawks. She’s also second on the team in assists and steals as well.

Of course, it isn’t just a one-person show. Tina Stephens enters Sunday’s game averaging 11.1 points per game and 5.9 rebounds a game. She’s 6-of-10 from deep on the season.

The Horned Frogs have won the last two matchups against Kansas. The Jayhawks, however, got the best of TCU during the 2017-18 season on New Year’s Eve. 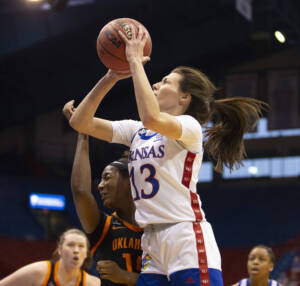 OPPONENT PREVIEW: TCU
The Horned Frogs enter the matchup 7-8 on the season and 2-8 in conference. Coach Reagan Pebley’s team hasn’t played since Jan. 30 when the Horned Frogs fell to No. 24 West Virginia by nine.

Lauren Heard is the leader for the Horned Frogs and the only player averaging in double figures. She is averaging 19.1 points per game, which is sixth-best in the Big 12. She’s second on the team in rebounds at 6.7 per game. She had 19 points on 16 shots against Kansas the first time around, also adding seven assists and six rebounds. She played a career-high 43 minutes against the Jayhawks.

Michelle Berry is also a player to watch for TCU. She’s second on the team with 9.3 points per game and first in rebounds at 7.9 rebounds per contest. She played 41 minutes against Kansas in the first matchup and registered her first double-double of the season with 10 points and 13 rebounds. That game started a streak of scoring in double figures four straight times.

UP NEXT
Kansas travels to Morgantown, West Virginia to take on the Mountaineers Wednesday, Feb. 10 at 6 p.m. (CT).