LINCOLN, Neb. – Kansas Volleyball won its first-round match in the NCAA Tournament for the second straight season as the Jayhawks defeated Miami 3-0 on Thursday at the Devaney Center.

"We were really good in all phases tonight. I thought we served well and passed well, and I’m real happy with the way we played. We’re excited this time of year to keep playing and see what tomorrow brings."

On the strength of 14 kills and a .333 hitting percentage, the Jayhawks won the first set 25-17. Caroline Bien had four kills, while Rachel Langs, Anezka Szabo and Ayah Elnady had three apiece and one combined attack error as the Jayhawks pulled ahead after being tied nine times, the last at 13-all. KU scored the last four points of the set, finishing things off with two blocks, first a combo from Langs and Elnady before Langs got set point with a solo block.

Momentum carried over for Kansas in the second set as the Jayhawks scored the first four points, built an 8-1 lead and never looked back as they won the set, 25-18. KU again hit the ball well with 13 kills against four errors and got four service aces, including a pair from Elnady for the first two points of the set.

The Jayhawks played from behind early in the third set as Miami scored the first two points and led by as many as three at 5-2 in the early going. KU scored four straight points to take the first lead of the set at 6-5 and following a 6-all tie, the Jayhawks took a lead they would not relinquish. Miami would stay within two points up until 18-16, but Kansas scored seven of the final 11 points – including three blocks – and put the match away at 25-20 on a kill by Elnady.

As a team, Kansas hit .278 for the match with 40 kills and committed just 10 attack errors. The Jayhawks also had the advantage in service aces, 8-3, while Miami edged KU in digs, 41-39. KU’s defense held Miami to a .113 attack percentage, which included the Hurricanes hitting less than .100 in each of the first two sets. 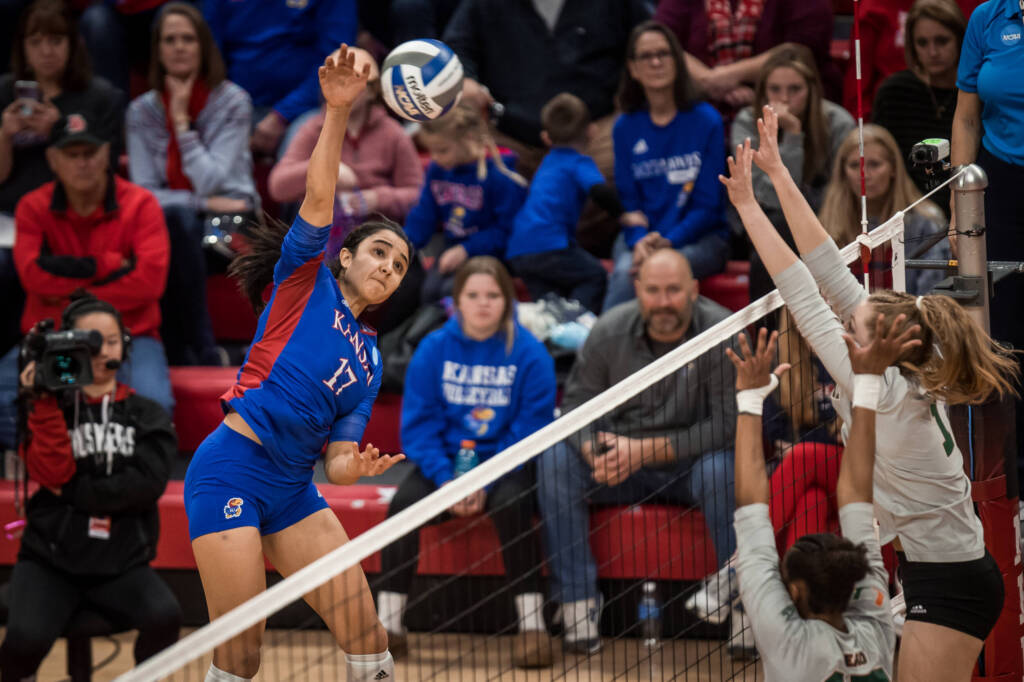 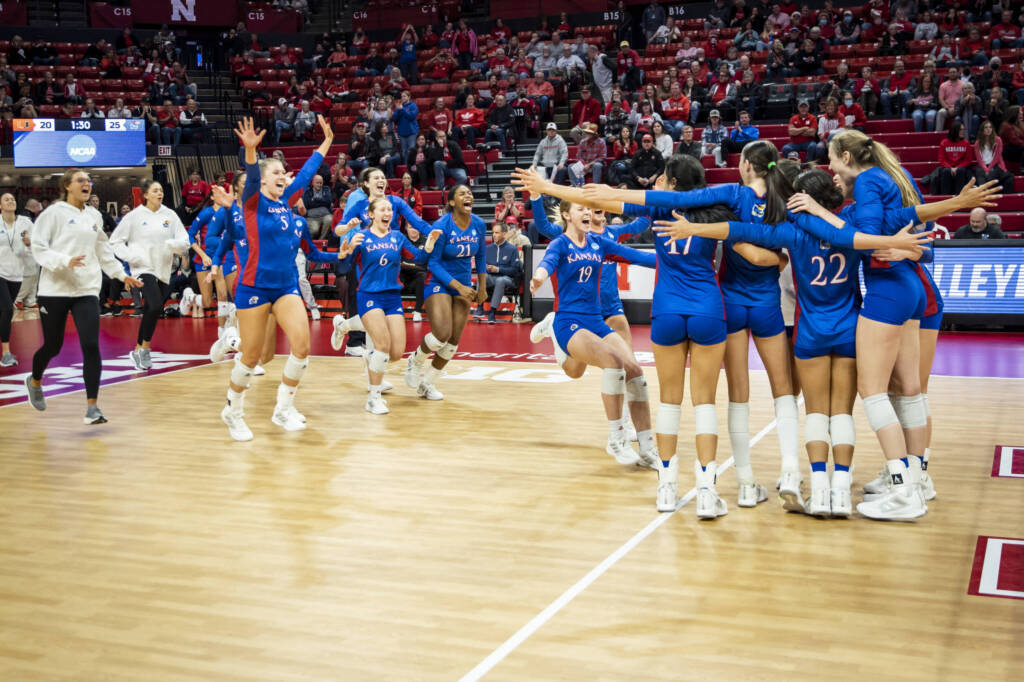 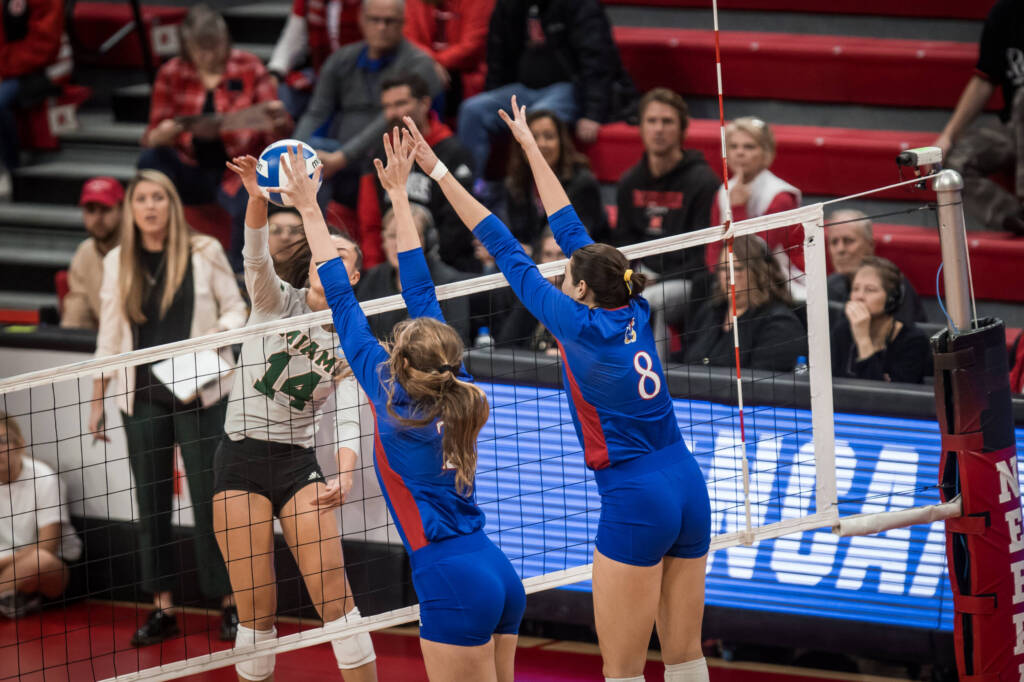 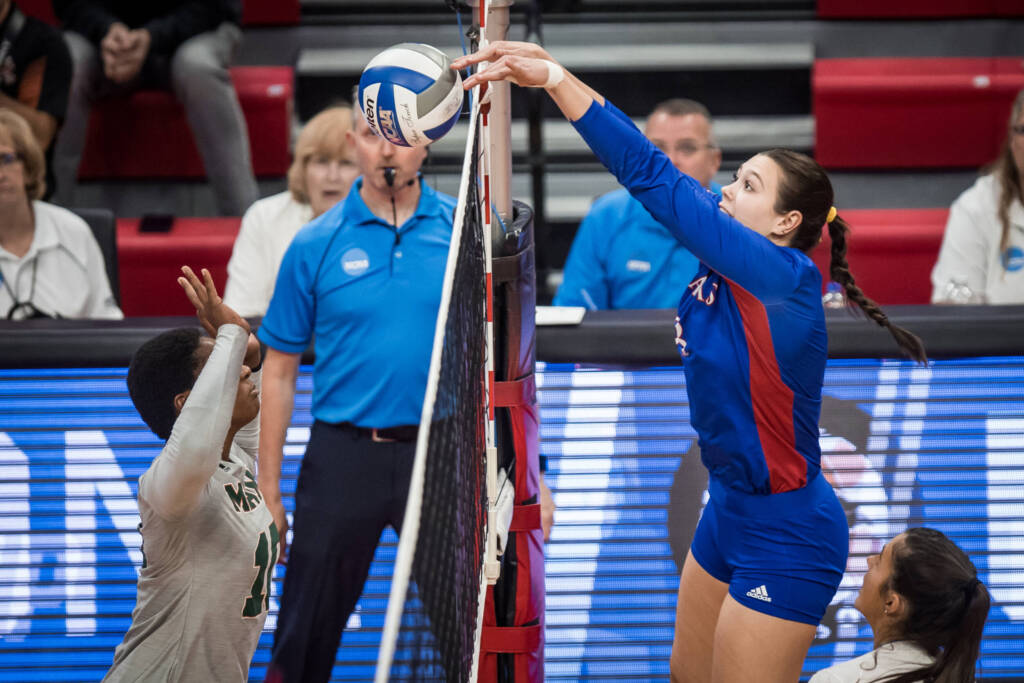 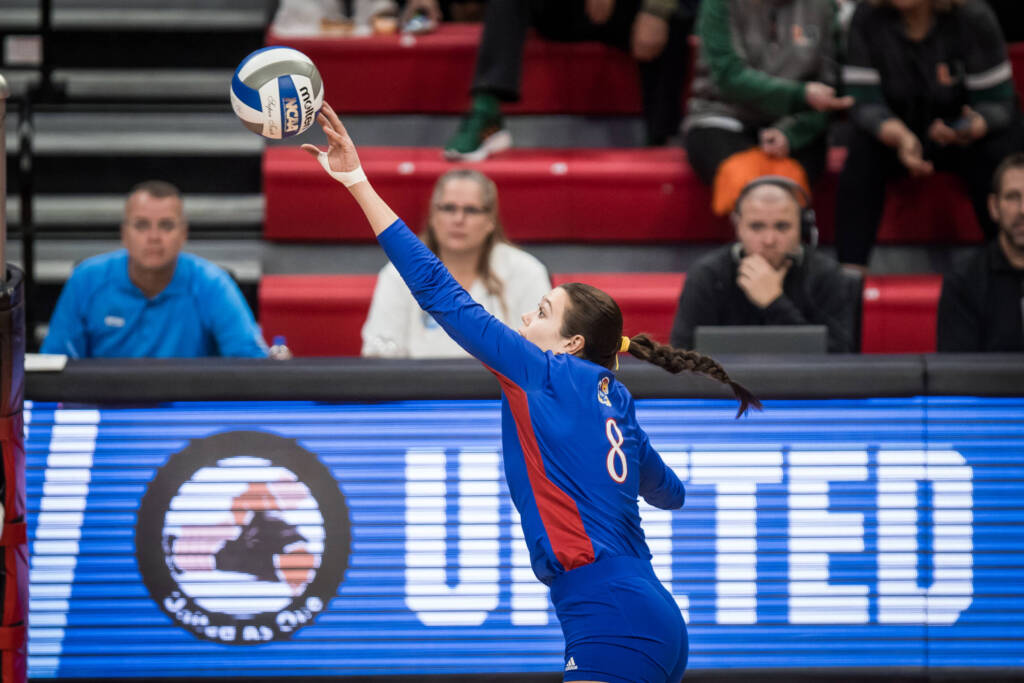 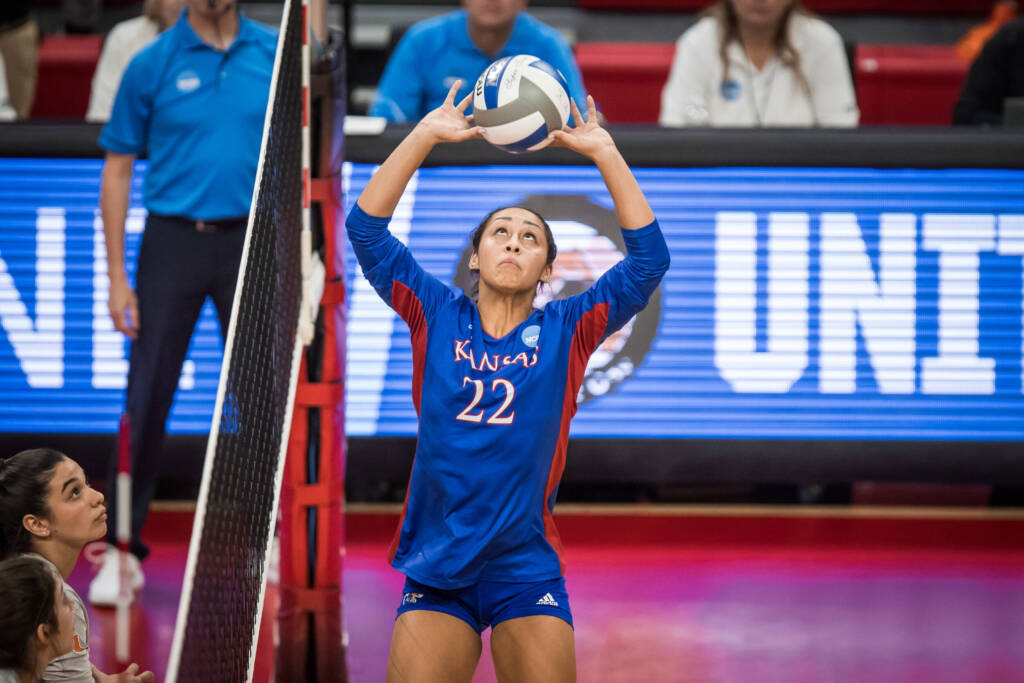 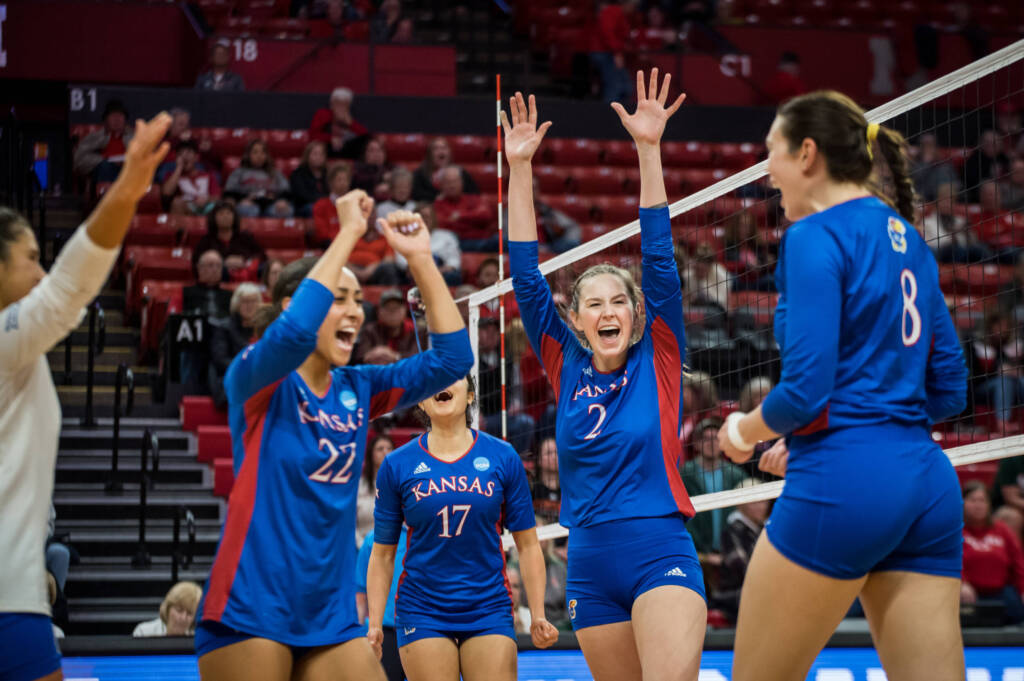 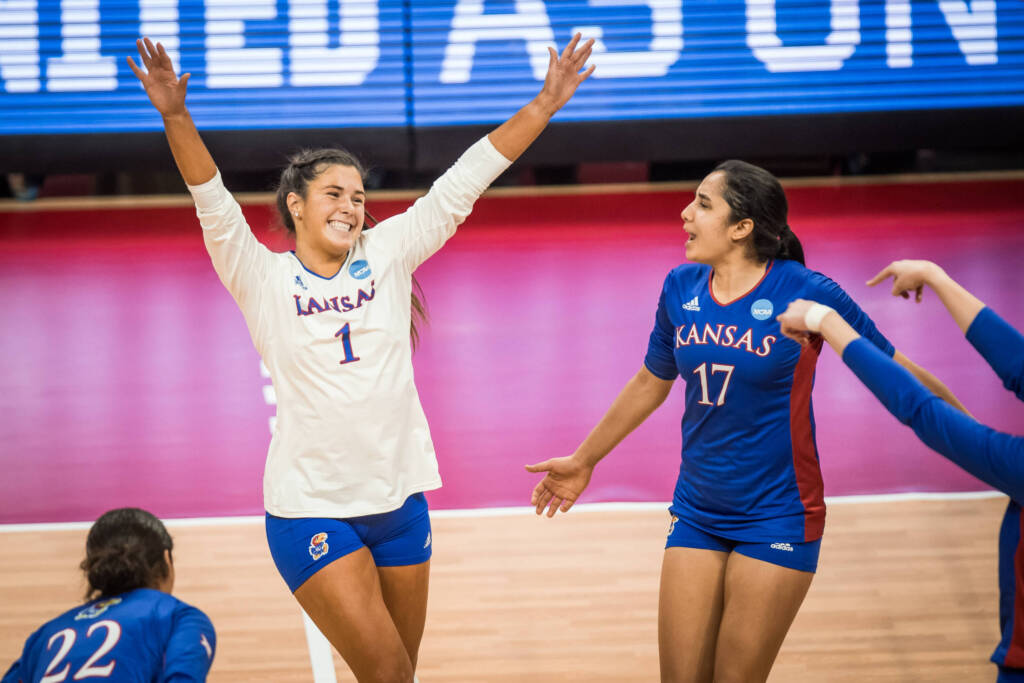 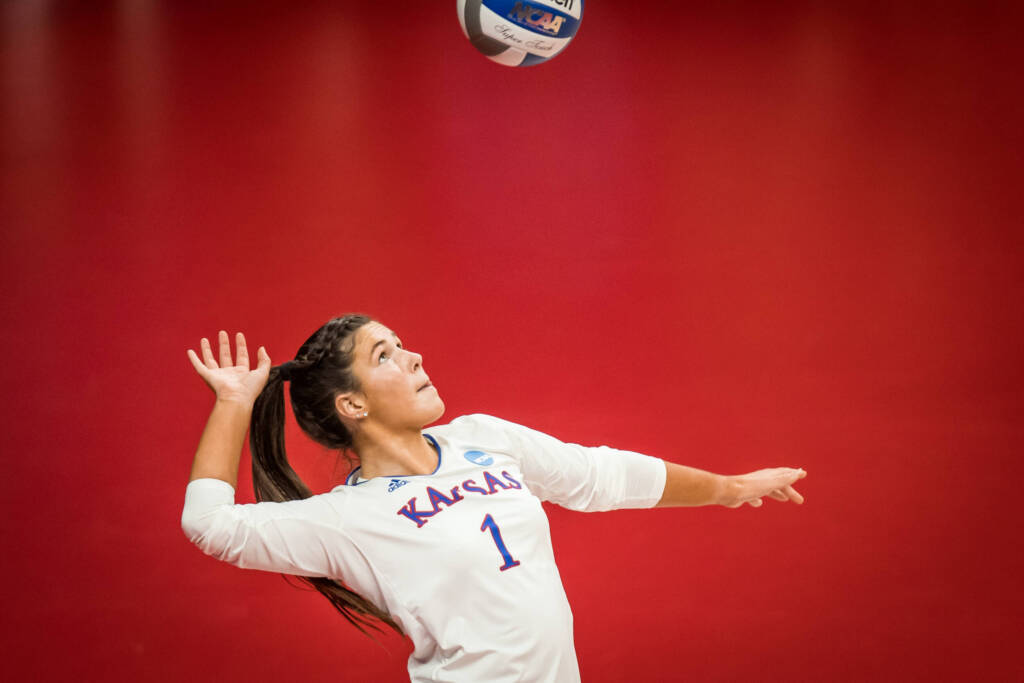 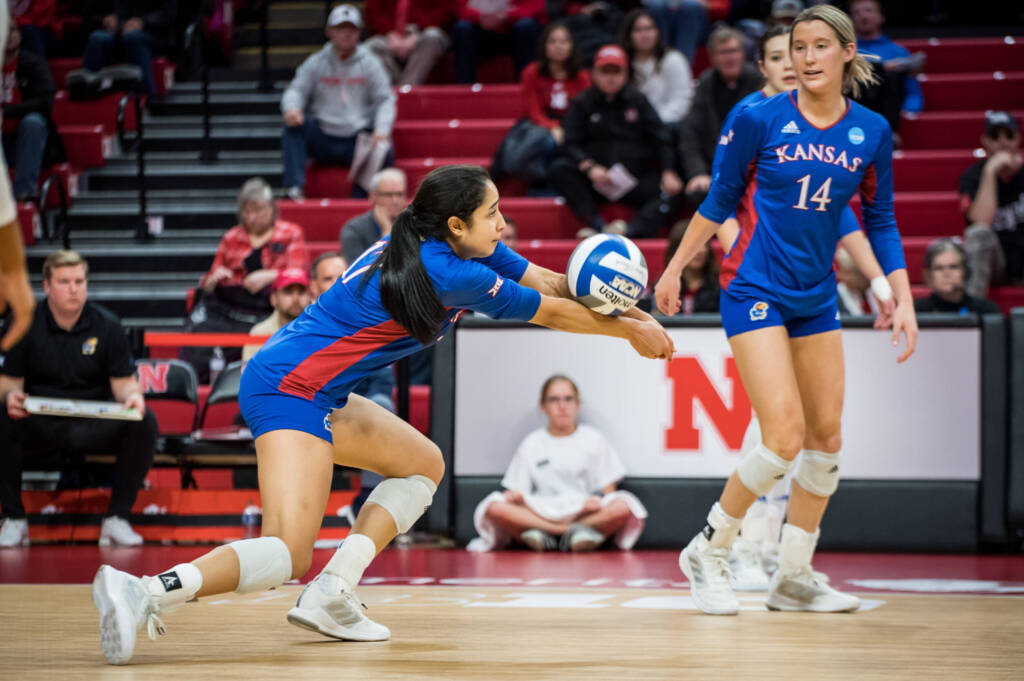 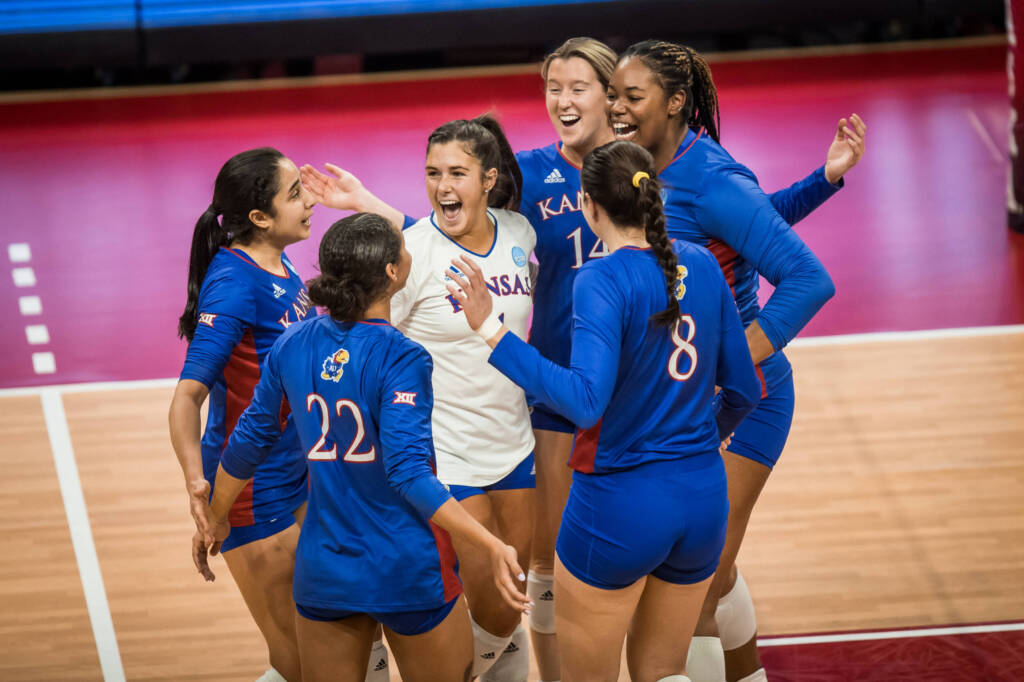 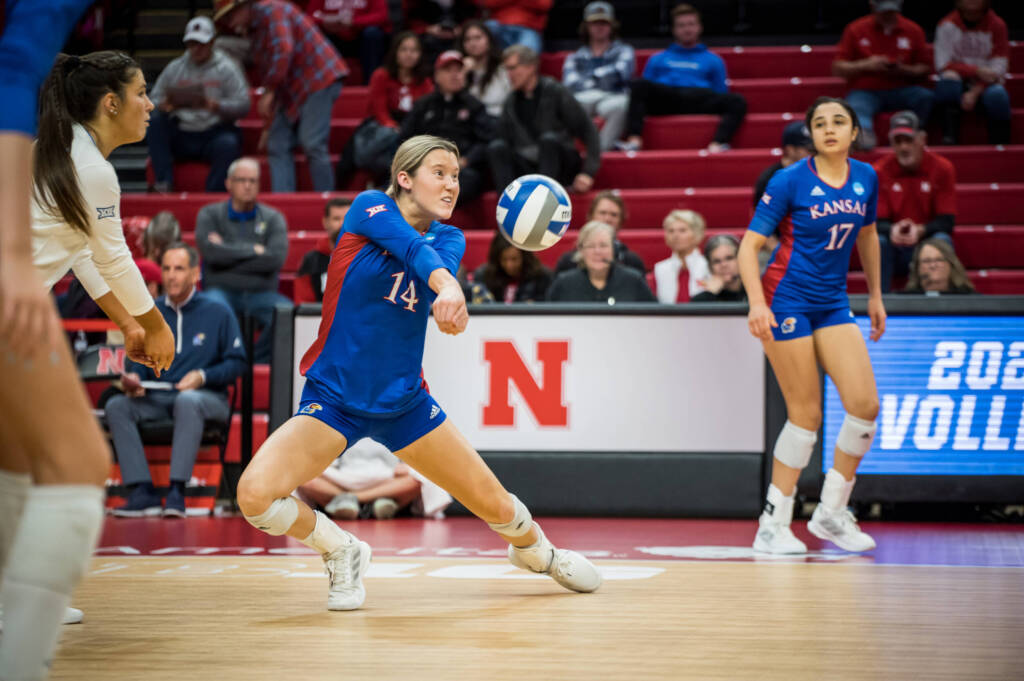 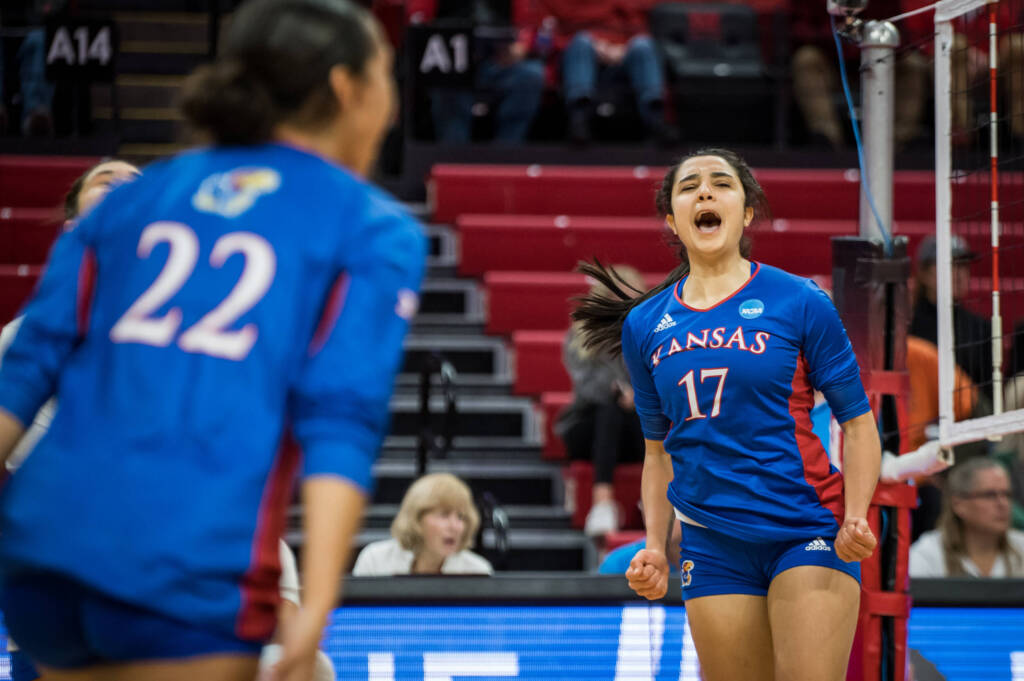 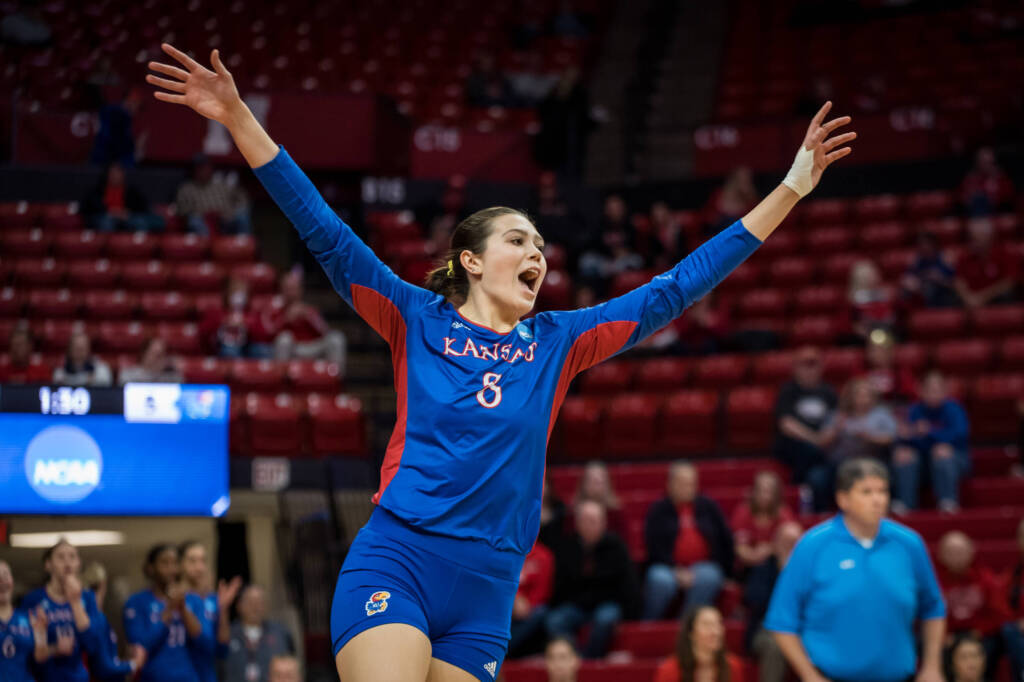 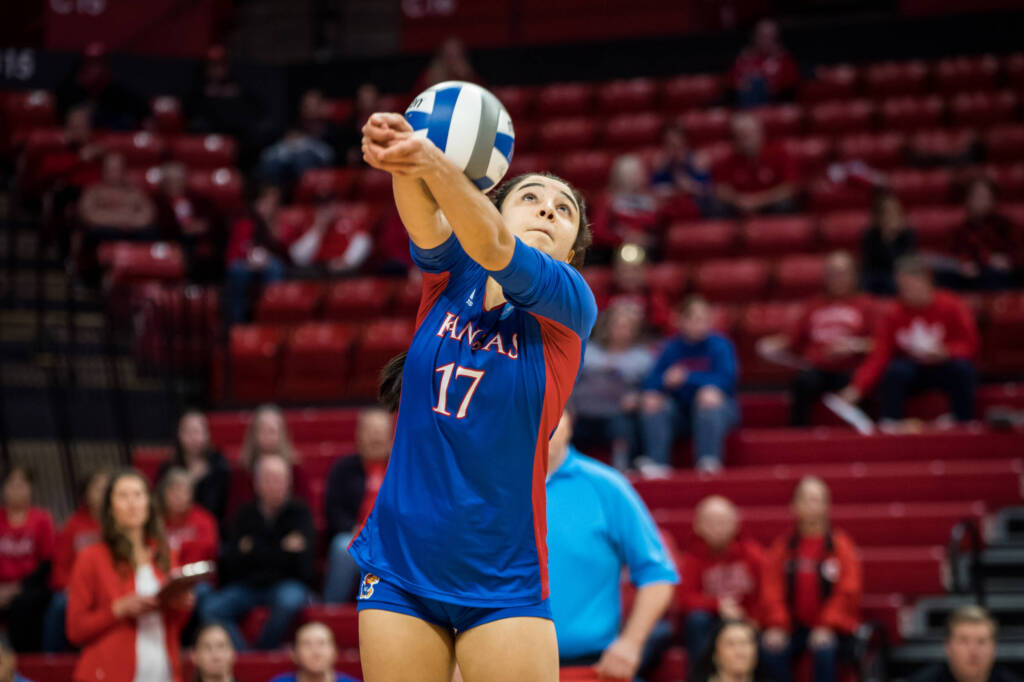 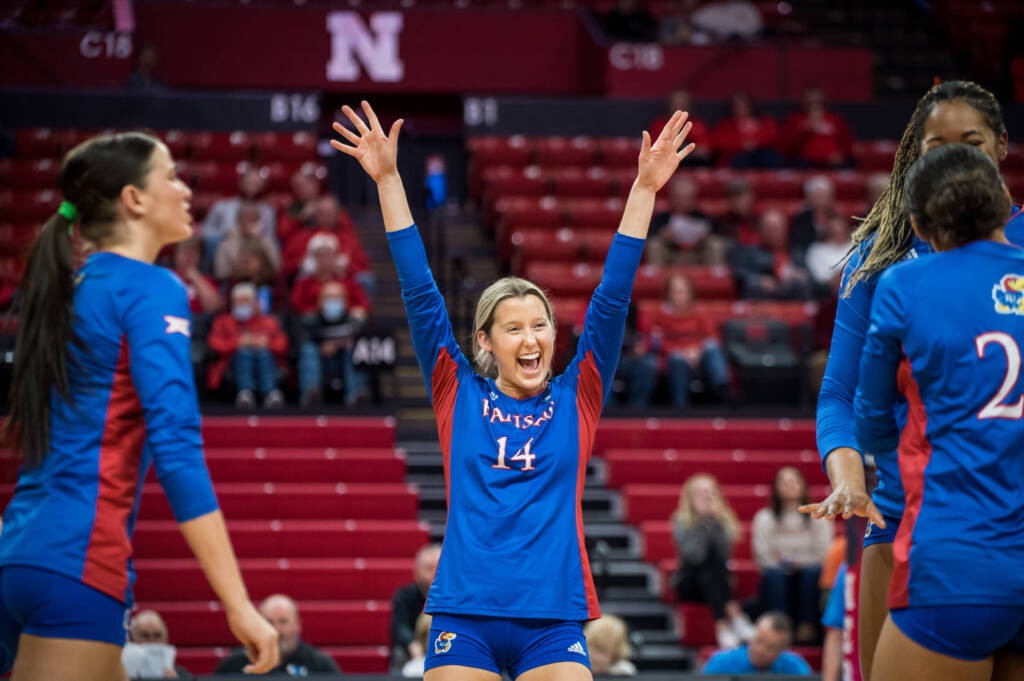 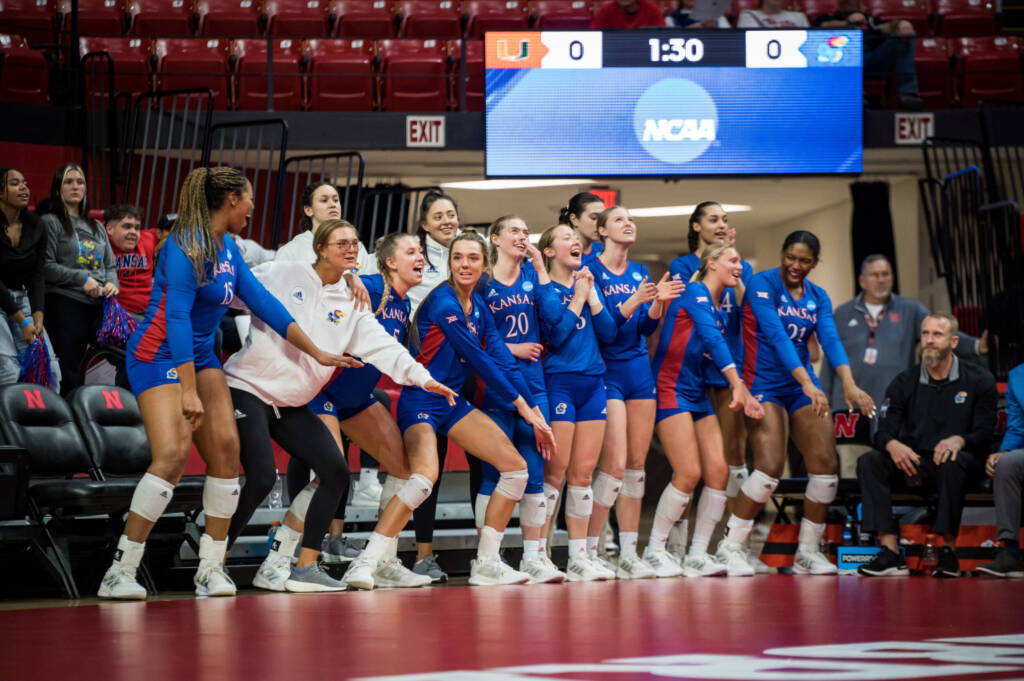