The two Big 12 schools battled earlier this season with the Longhorns edging the Jayhawks, 79-72.

In the Jayhawks’ last game, Holly Kersgieter registered a career-high 29 points in the 99-98 overtime loss to Texas Tech, while grabbing 16 rebounds for her second double-double of the season. Zakiyah Franklin joined Kersgieter in double-figures, finishing with 20 points. She recorded a career-high 26 points in Kansas’ last game and joins Kersgieter as the only Jayhawks this season with back-to-back 20 points contests. Aniya Thomas and Chandler Prater joined the duo in double figures with Prater tying her career-high with 14 points. 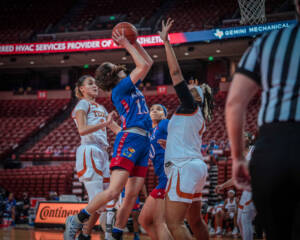 Collier averages a team-high 21.1 points per game and 12.5 rebounds per game. She has started in all 21 games for the Longhorns this season and is joined by Joanne Allen-Taylor as the only two players to have started in every contest. Celeste Taylor (12.6 PPG) and Allen-Taylor (11.9 PPG) join Collier in averaging double-digit points this season.

Taylor is the Longhorns’ team leader in steals per game (2.44), while Kyra Lambert has a team-high 3.05 assists per game. Collier (1.24) and DeYona Gaston (1.91) both average over one block per contest.