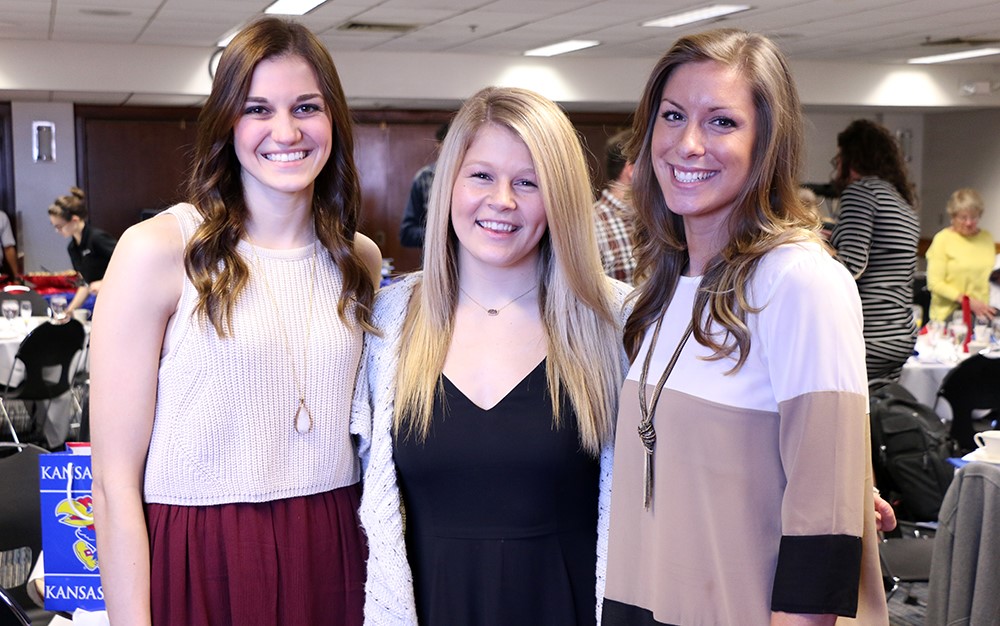 LAWRENCE, Kan. – For a few hours this afternoon, the Big 12 Room in the KU Memorial Union turned into the Big 12 Champions Room as the 2016 Kansas volleyball team celebrated its conference championship season during its annual team banquet.

Kansas Director of Athletics Dr. Sheahon Zenger was on hand and spoke praises of the 2016 Jayhawks. With so many special moments so far in the 2016-17 academic year – men’s basketball defeating two blue-blood programs in No. 1 Duke and No. 4 Kentucky, and football defeating Texas – he still proclaimed that volleyball winning the Big 12 title was his favorite moment to date.

“I am proud of you,” Zenger said. “Thank you, ladies, for everything you have done for this school. I talk about you all the time and hold you up as the banner program for the rest of our programs. The way you get it done on and off the court – no one matches you. Thank you.”

Four-time Big 12 Coach of the Year Ray Bechard summarized the Jayhawks’ season at the podium and showed appreciation for all the support that staff members and fans gave during the setup the Jayhawks for success in 2016.

After the meal, the group watched the season highlight video produced by Rock Chalk Video, the team received the class gifts and posed for photos. Freshmen received letter jackets, juniors received a commemorative watch, and seniors were gifted a framed jersey – there were no sophomores on this season’s roster. The seniors will be presented with a ‘K’ ring later in the spring at a KU Athletics-wide event.

• Big 12 Conference regular-season champions … The Jayhawks went 15-1 in league play … It was KU’s first-ever conference title (Big Eight or Big 12).
• Kansas finished with a 27-3 overall record and a No. 12 national ranking in the AVCA Coaches’ Poll … It is the fourth time KU has been ranked in the final AVCA poll … The Jayhawks have been ranked for 31-straight polls.
• KU maintained a top-10 ranking throughout the regular season … Before the final ranking of the season (No. 12), KU was ranked in the top-10 for 25-straight AVCA polls.
• Kansas has a 57-6 record in the last two seasons for the best winning percentage in the country during that period (.905).
• With a five-set win over Texas Oct. 29, Kansas snapped a 25-match losing streak in the series against the Longhorns to trail-blaze the path towards a Big 12 title. It was KU’s first win over UT since Nov. 8, 2003.
• The Jayhawks were among seven elite programs to host the first and second rounds of the NCAA Championship in the last five seasons, joining Stanford, Penn State, Nebraska, Texas, Washington, and Florida.
• Kansas finished the regular season with its first-ever undefeated home schedule in program history (12-0). Eventual Elite Eight participant Creighton ended KU’s 17-match home winning streak in the second round of the NCAA Championship. The Jayhawks are 34-2 in the last 36 matches inside Horejsi Family Athletics Center.
• Seniors Maggie Anderson, Tayler Soucie and Cassie Wait finished their careers with a 104-23 (.819) record in their four-year playing careers at Kansas. The trio has the best four-year winning percentage in program history.
• In addition to the program’s first conference title, Kansas earned Big 12 Player of the Year (Kelsie Payne), Libero of the Year (Cassie Wait), Setter of the Year (Ainise Havili) and Coach of the Year (Ray Bechard), plus three additional All-Big 12 awards. Madison Rigdon earned All-Big 12 First Team honors with Payne, Wait, and Havili. Tayler Soucie earned All-Big 12 Second Team honors. Jada Burse earned a Big 12 All-Freshman Team nod.