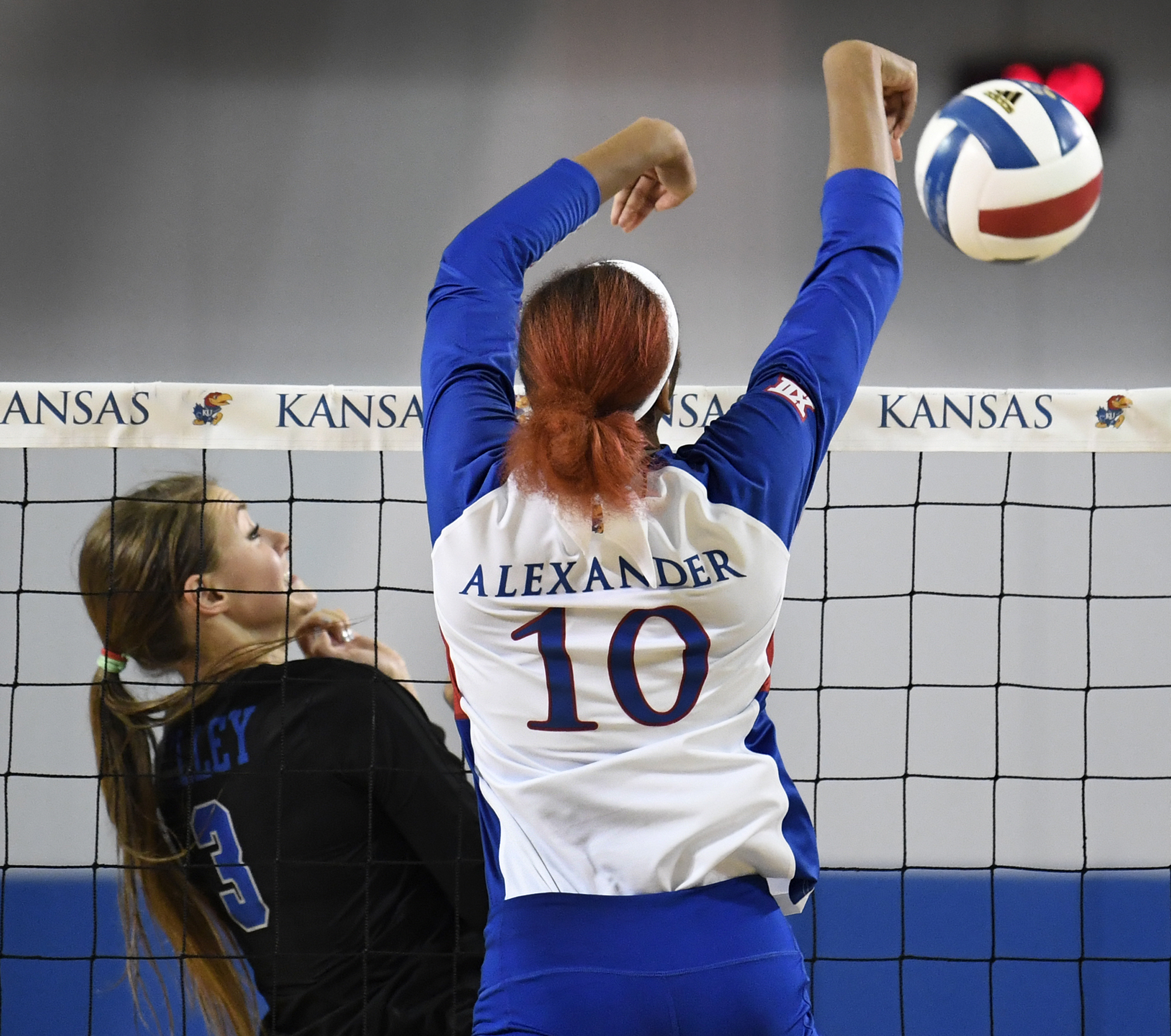 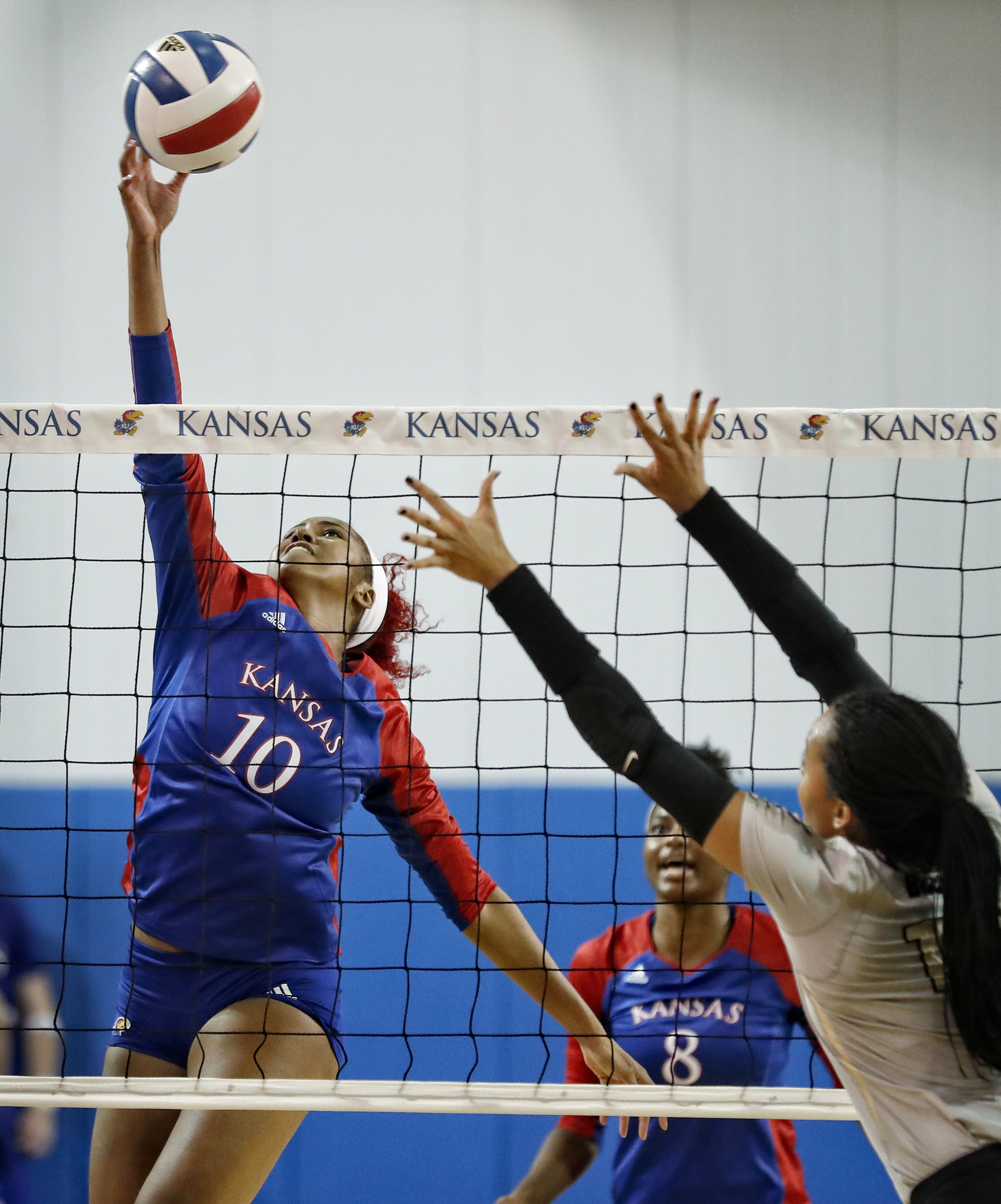 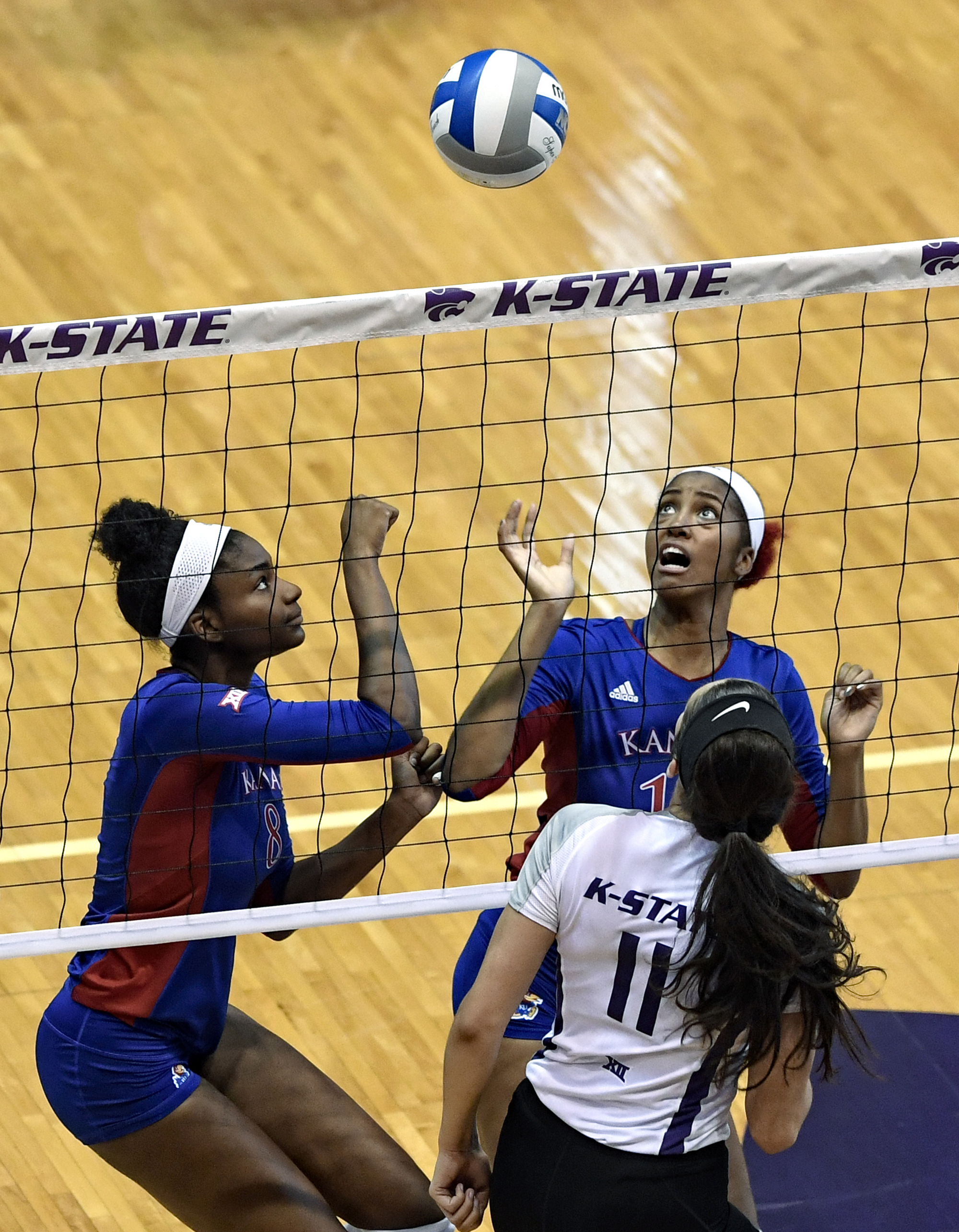 Taylor Alexander is not only passionate and dedicated on the court, but off the court as well. After graduating in three years from Ole Miss, Alexander transferred to Kansas to continue her volleyball career through graduate school.

Earning honors such as Southeastern Conference (SEC) Freshman of the Week, Rebel Classic All-Tournament Team, and moving to 10th all-time at Ole Miss with 175 career blocks, Alexander has much to show from her three years in Mississippi and offers instant impact to the Kansas volleyball team.

However, excelling in college volleyball wasn’t Alexander’s only aspiration. She plans on entering law enforcement and becoming a federal agent after graduate school.

Alexander didn’t begin her volleyball career until her freshman year of high school.

“It wasn’t until the end of my sophomore year, beginning of junior year, that I realized I was good enough to play in college,” Alexander stated.
“Up until high school, I’m pretty sure I always wanted to become the President of the United States.”

Having such high desires and goals was always part of Alexander’s mindset. From her freshman year of high school on, she knew she wanted to work in the law enforcement department, she just was unsure where.

Growing up with a mother who worked as a paralegal, Alexander was able to get an inside-look into courtrooms and court cases. She’s known for as long as she can remember that this was the field she wanted to be a part of, she was just looking to find which area she belonged in.

“There was never a particular moment in life where I knew I wanted to work in law enforcement,” said Alexander.

The urge to become a federal agent doesn’t happen to just anyone.

“I’m very big on justice being served. It excites me to know that I could help people who need to be helped,” Alexander explained. “Even if it’s me doing just one right thing, I know that one thing will go a long way.

“From watching so many of those [crime] shows, I’ve learned that good agents don’t really have families. Or if they do, their relationships struggle a lot,” said Alexander when asked about what scares her the most about her career choice.

Alexander, who shows endless selflessness on the court, continued her statement to show her selflessness outside of the game when she said, “I also put that thought at ease sometimes knowing that I’ll be helping other people.”

Her belief in what will set her apart from other want-to-be federal agents?

“I think the way I approach situations is different from the way other people do. I’ve been through a lot and learned a lot,” she added. “So my mindset is a lot higher and older than most people my age. I take the things that I’ve been through in life to help me with the way I view things.”

In regards to volleyball, hearing Taylor Alexander’s name makes you immediately think of her aggression and height.

Standing tall at 6-foot-4, Alexander can seem extremely intimidating at first glance. The middle blocker believes she can come off as aggressive at times, which could cause conflict in the law enforcement field. She hopes to improve on that demeanor with time.

“People can get defensive from the way I approach situations and the way that I say things, so I think I could work on my presentation toward certain people,” Alexander explained.

Goals for Alexander are simple, “Make a difference. I just want to make a difference,” she said with conviction. “In this world, we’re so used to how everything is and we’re okay with how it is. But I’m one of those people that if I’m not okay with something, I’m going to voice my opinion and tell you.”

Alexander desires to make a large and lasting impact on her community when she enters law enforcement. With a set of twin sisters, a younger brother, an older brother and a nephew, Alexander’s biggest ambition is to influence her family in a positive way.

“My older brother was a huge role model for me and I want to be a role model for my younger siblings. I want them to know that nothing is impossible, regardless of what you’ve been through or where you came from, because there is always something better than what we’re used to,” said Alexander.

Family has always been a crucial piece of Alexander’s success thus far, both on and off the volleyball court. All her life, Alexander has been held to a high standard by her family because they all know what she’s capable of becoming.

“My family looks to me as the person who can make things happen and make a change,” said Alexander.

Much the same as her family, coaches and teammates recognize how valuable Alexander is as not only a player, but also as a person. However, Alexander has already surpassed any expectations held for her on the volleyball court, becoming one of the top all-time blockers in Ole Miss volleyball history.

Many people don’t know that Alexander’s volleyball career was nearly cut short when she came face-to-face with a heartbreaking tragedy before the start of her final season at Ole Miss.

In February of 2016, Alexander’s best friend and teammate, Ty Laporte, was killed in a tragic car accident. Laporte, who was two years older than Alexander, was more than just a friend, as she was also her mentor.

“I met her at Ole Miss through volleyball and that’s how we became best friends,” Alexander explained. “She was the greatest person I’ve ever known. She lit up a room and she was that person that lived her life to the fullest. She’s part of why I play the way that I do.”

Having to go through such a difficult and troubling experience definitely left a mark on Alexander. She hit her lowest point in life and wondered if playing volleyball was something she even wanted to continue participating in. The loss of Laporte was a big reason in Alexander’s decision to transfer from Ole Miss for graduate school.

“When it got out that I was looking to transfer and continue playing volleyball, Kansas was one of my offers. I came on my visit and ended up completely loving it here,” said Alexander.

When asked if she had any words of advice for anyone who feels like giving up on sports, or for those that don’t feel qualified enough to make it to the next level, Alexander said, “Take the time to get to know yourself. I think we get so caught up in trying to live and impress other people, but sometimes you need to just get to know yourself.”

Even those who excel at their sport face hardships and feel incompetent when times seem tough.

“Struggles make you,” are the words that Alexander lives by. “When you hit your lowest, that’s when you need to keep going so that you can hit your highest.”

Alexander now wears number 10 for the Jayhawks and she’s continuing to shine bright both on and off the court. Alexander, who’s in the midst of a dominating senior season at Kansas, is proving to be a fearful force for the Jayhawks, with a hitting percentage on the season of .326. Alexander demonstrates to all of us that adversity and hardships can bring out the very best in people.