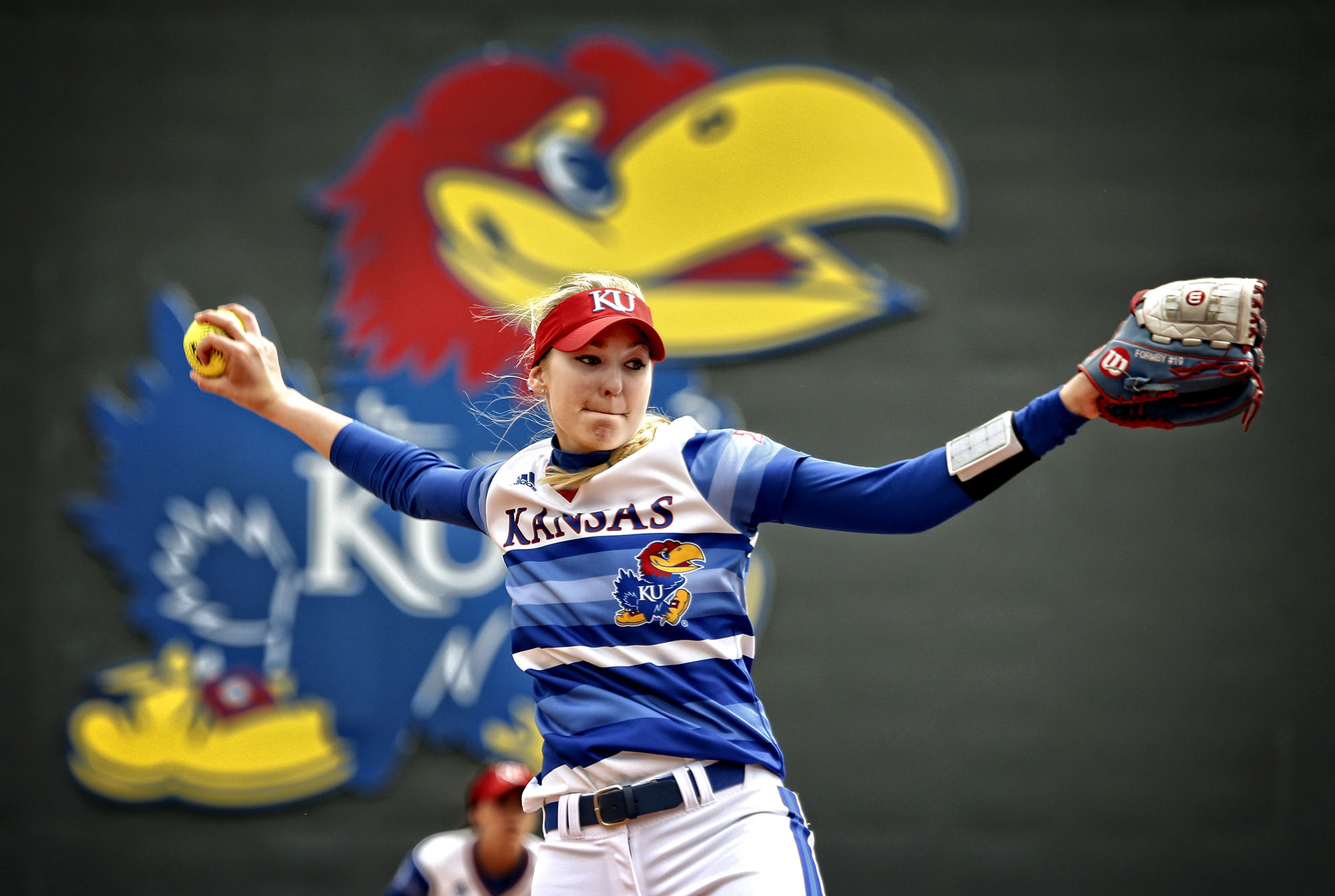 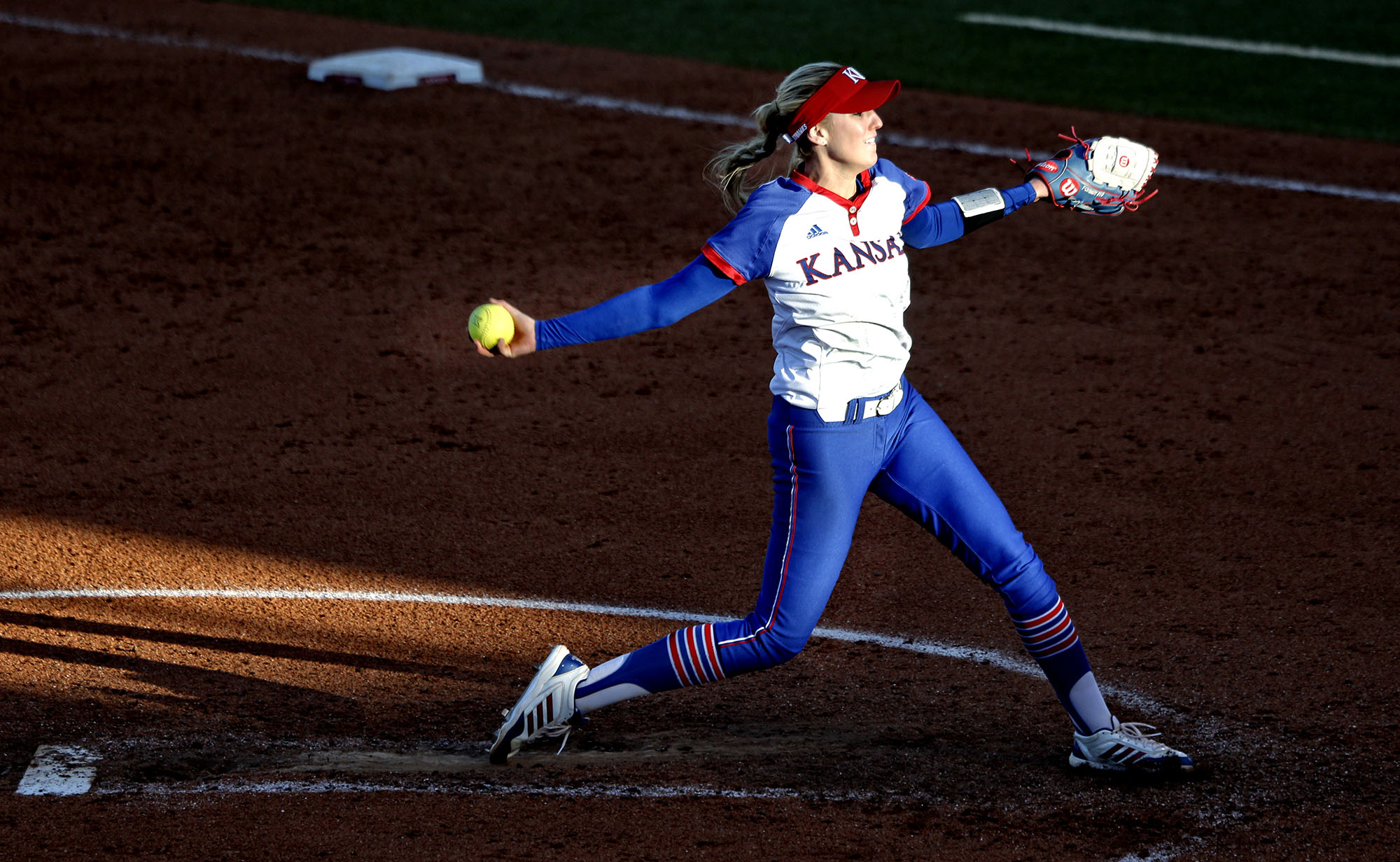 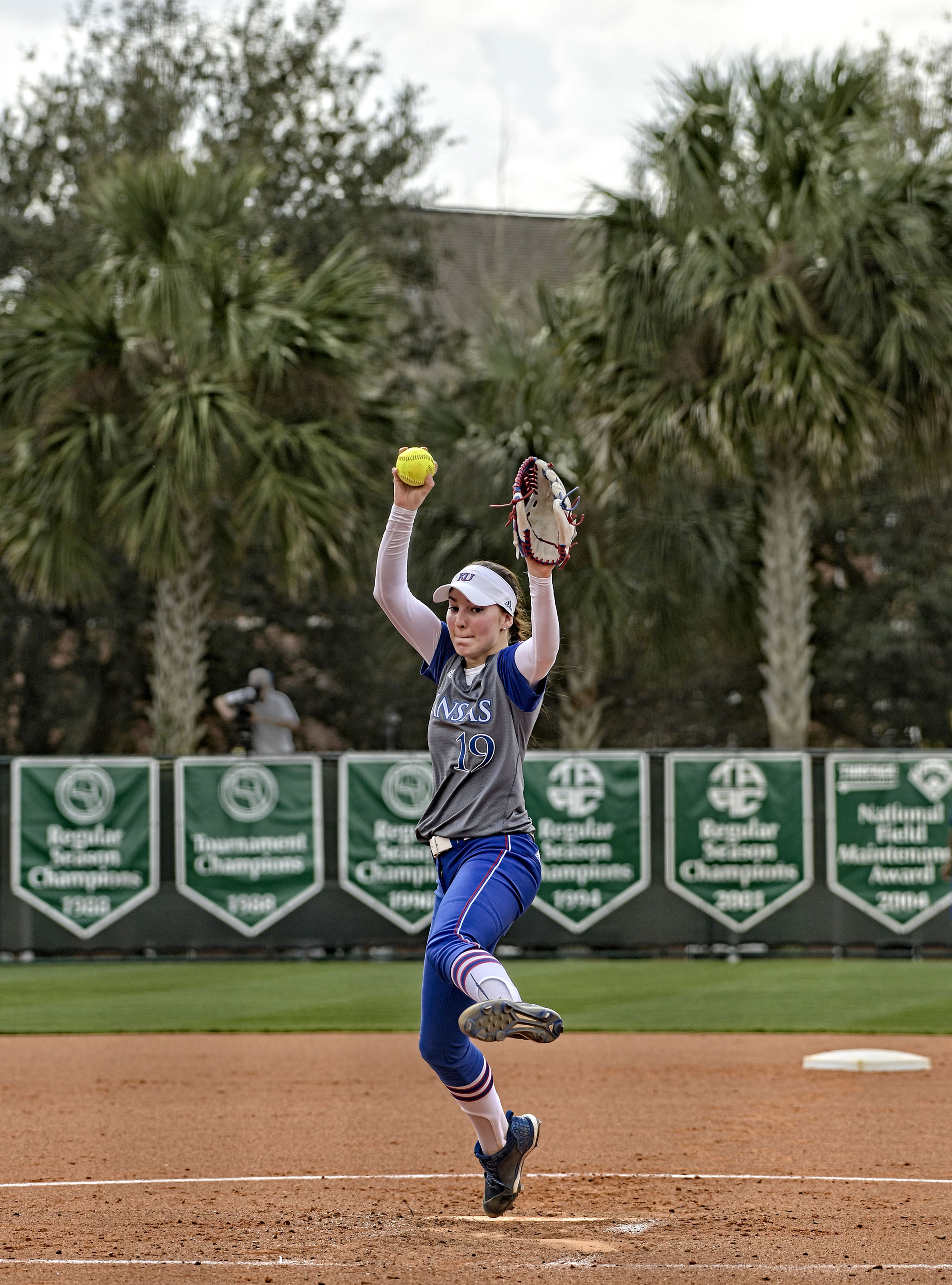 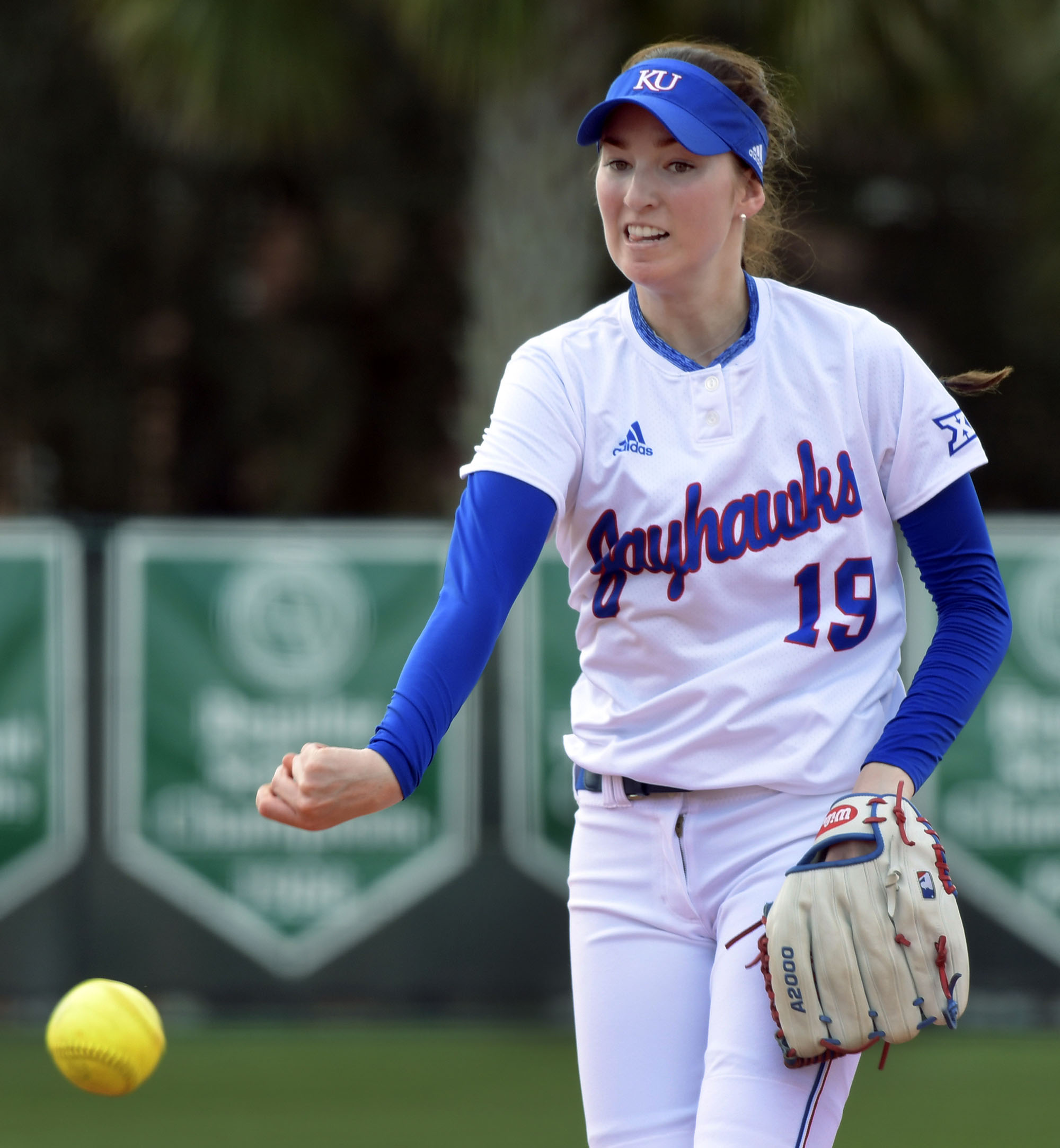 On March 20, 2016, Kansas softball’s Andie Formby pitched a no-hitter. Andie, then a sophomore, stood six-foot tall, in center of the diamond, sitting down batter after batter. Dominating. While hurling a no-hitter is an accomplishment worthy of the beginning of a news segment or the dramatic and triumphant end of a sports movie, Formby’s feat came in the middle of her story.

Two years before her no-hitter, in 2014, Andie was a senior at Mater Dei High School in Santa Ana, California. She would soon finish her prep and club careers and head off to compete for a Division I university, but of course not before earning a “Player of the Year” here, being named a “Freshman of the Year” there, garnering an all-conference nod and then having regional and national championships sprinkled on top. Formby left her home state of California to continue to play the sport she loved. Kansas, which is often categorized as a “flyover state,” was exactly that, as Formby bypassed the plains and prairie, landing 2,500 miles from home in Virginia.

Andie played her freshman year at the University of Virginia. While Charlottesville was only temporarily “home,” she made 33 appearances pitching for the Cavaliers, 24 of those as the starter. With Virginia, Andie struck out eight batters in one game on two separate occasions and threw the final four innings of a combined no-hitter against Virginia Tech. However, even after achieving all of these successes, following her debut college season, Andie elected to transfer.

Transferring poses all sorts of challenges for a student-athlete. Like any other transfer, Andie would now have to select a new school, with new coaches, a new team, university and system. However, the laundry list of upcoming changes that would come with transferring schools were only half of the challenge she faced.

Andie Formby is a twin. Alex Formby, Andie’s identical twin sister, also played softball at the University of Virginia in 2015. The pair played on the same club softball team until they were 14 and then went on to play high school ball together. Alex Formby is also a pitcher and also elected to transfer from Virginia after her freshman season. Identical.

Leaving Virginia, Alex decided that “There’s no place like home,” and transferred back to the Golden State, to San Diego State University, while Andie chose Dorothy’s widespread and even cliché quote quite seriously, and took her talents to The University of Kansas. Once only separated by five letters in their first names, Andie and Alex were now apart for the first time, about 1,500 miles apart.

Transferring to Kansas, Andie shaved about 1,000 miles off her distance from home in Orange, California. This wasn’t the only number slashed in her move from the East Coast to the Midwest. Andie’s ERA was nearly cut in half during her sophomore, and debut, season at KU. In 2016, as a Kansas newcomer, Andie posted a 2.26 ERA, good for fifth-best in the Big 12 Conference. She threw nine shutouts, struck out 113 batters and became the 26th pitcher in Kansas history to throw a no-hitter.

During a strong sophomore season, Andie began to feel more at home in Kansas, which she largely credits to her coaches’ close attention to player welfare … and the Jayhawk defense.

“The defense at Kansas behind me was nice. I knew I had eight other people who were going to help me out,” Andie said.

Fortunately for Andie, she found support in her coaches and their careful attention to putting their players first and teammates, both on and off the field at Kansas, as her number one cheerleader was now 1,525 miles away in San Diego. Andie’s twin, Alex, had found good fortune on her own, having finished her first season with the Aztecs 16th in NCAA Division I softball in saves with five. While the twins found success on the field with their respective new teams, living apart from each other for the first time in their 20 years of life proved difficult.

“It was hard transferring to different places because even though we may not have always been on the same team, we were always in the same place,” Andie said.

Although living halfway across the country from one another for the first time was challenging, the twins found a silver lining in their separation. Throughout the years and among all levels of competition, the Formby twins, for the most part, had played on the same teams, and both as pitchers.

“We play the same position; it gets a little hard. I want her to do really well, but I want to do well at the same time, so it’s hard to compete against your best friend,” Andie said.

“The good thing is (that) I’m not her competition anymore, I just get to be her fan from a distance,” Alex said.

Andie and Alex’s positive outlooks were in-sync. While transferring to different universities made having to compete against one another for playing time a bit easier on the Formby sisters, it also ensured the classic “twin switch-up” prank would never happen on a university campus or on the softball field (which they have considered in the past). Alex shrugged off a question about taking advantage of their identical twin status in the name of a joke.

“We switched spots in a class once, but no one caught on because we look so much alike, so it wasn’t funny,” Alex said.

The twins could now perform on their own individual stages, while remaining in close contact and continuing to be each other’s biggest supporter.

“When I have the opportunity, I watch her (Alex’s) games when we are on the bus, or I just follow the stats,” Andie said.

Andie’s story took an unexpected turn in 2017. The three-time 2016 Big 12 Conference Pitcher of the Week was redshirted for her second season at KU. Watching from the dugout was a challenge for Andie, especially following an impressive season on the softball diamond the previous year.

“Last season was pretty difficult for me, but it taught me a lot about myself and what I can get through,” Andie said.

Andie attributed a boost in her confidence level now to her redshirt season of 2017. While many would look at Andie’s patience and perseverance in a difficult scenario with awe, her twin, Alex, was well aware of Andie’s drive to pick her softball career up where it left off her sophomore year.

“It was really hard for her because she is super competitive. Some people could get lazy, but not Andie. I admire her for it,” Alex said.

If anyone knows how competitive Andie is, it is Alex. While playing board games as children, Alex frequently walked away from the competition as it became too intense. It makes complete sense that Andie possesses an uber-competitive instinct, considering she models her game after the New England Patriots’ quarterback, Tom Brady. In fact, Andie lists Brady and her twin sister Alex as her all-time favorite athletes. While many would consider Alex in great company, paired with five-time Super Bowl Champion Tom Brady, Andie would likely say the opposite.

During her redshirt season, while attempting to get healthy and supporting her Jayhawks from the sidelines the best she could, Andie was able see one of her favorite athletes (not Tom Brady) play in-person on a few occasions. Rooting on and communicating with her twin sister and other beloved athlete has been a constant in Andie’s Kansas softball experience thus far. The Formby sisters’ support and a competitive work ethic contributed to making the most out of her 2017 redshirt season.

“I think the thing that I did most to be a part of the team (during my redshirt season) was to keep working to get healthy. (I) Worked hard so that when I did get back (on the field), I could contribute to my best ability,” Andie said.

Number 19’s hard work has carried over into 2018 and her redshirt-junior season donning the Crimson and Blue for Kansas. Andie and the Jayhawks had a hot start to the season, winning 22 of the first 28 games and will look for continued success in upcoming Big 12 Conference play. Through a complex career, with seasons plagued by unique challenges and career-defining experiences, Andie recognizes the importance of taking her current campaign one game at a time and exercises patience with the team goal in mind.

Despite playing a sport in which success is often quantified heavily by statistics and measured in numbers, Andie Formby’s softball journey follows a storybook-like narrative. Her story is the classic tale of setting out for an opportunity that is great and unknown, leading to an adventure with unexpected challenges, heroic achievements and faces and feelings that come and go.

Like any great journey, this particular Jayhawk protagonist has not traveled alone. If you swap the Tinman, Lion and Scarecrow for 24 teammates, a few caring coaches and her twin sister Alex, Andie has found the “home” and support system she set out for nearly four years ago, and they have been there all along.

With chapters still to be written, Andie is not looking ahead by flipping to the final page, she understands that her story is best told by turning one page at time.