Every young Kansas fan has dreamt about playing basketball as a Jayhawk in Allen Fieldhouse. Although most will never get the chance, junior guard Clay Young is living that dream.

Born in 1994 and raised just 30 miles outside of Lawrence in Lansing, Kansas, Young has been a Jayhawk since birth. Growing up watching KU legends like Mario Chalmers and local hero Wayne Simien play, he has been in love with the men’s basketball program since he was a child.

“I remember coming to games since I was seven or eight years old,” Young said. “I was a Jayhawk fan as long as I can remember. My parents raised me like that.”

Both of Young’s parents are Jayhawk fans, and his mother, Teresa Young, attended the University of Kansas to earn her master’s degree.

Besides being among the 16,300 fans inside of Allen Fieldhouse on any given gameday, his parents sent Young to basketball camps at KU when he was a child.

“His roots run deep with the Jayhawks,” Teresa said. “He attended Coach Self’s camps for several years when he was growing up.”

Being KU fans isn’t the only common theme that runs through the Young family. Young’s brother, Trevor Young, and father, Tom Young, both played college basketball, while his mother played softball during her college career. Trevor followed in Young’s footsteps and played at Kansas City Community College while both Tom and Teresa were athletes at Baker University. With such athleticism running in the family, Young was expected to be a college athlete.

“I think from a young age we invested so much time in basketball and other sports,” Young said. “The goal was to play in college.”

Young spent the majority of his youth in Lansing playing baseball, basketball, football and soccer. He eventually settled on focusing solely on basketball when entering high school.

“Basketball was a lot more fun and I was seeing more success in basketball,” Young explained of his choice.

At Lansing High School, Young was a four-year starter for head coach Rod Briggs. During his career for the Lancers, the 6-foot-5 guard averaged 6.3 points, 3.5 rebounds and 1.2 assists per game. Throughout the years, Young continued to improve and drew the attention of college scouts with his play on the court. His senior season was very successful, one which saw him average 9.0 points, 6.5 rebounds and 1.5 assists in leading his team to the KSHAA Class 5A state title game in 2013. For his efforts, Young was named first-team All-Kaw Valley League and earned all-state honorable mention recognition.

Upon the conclusion of his high school days on the hardwood for Lansing, Young was offered and accepted a scholarship to play basketball for Kansas City Community College (KCCC), which was close to home and came at no cost. 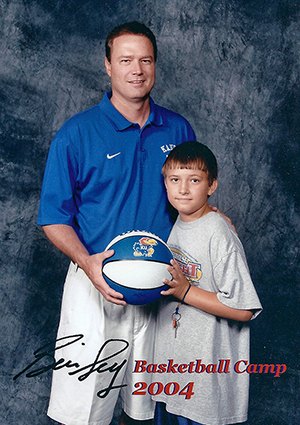 “I had a ton of NAIA (National Association of Intercollegiate Athletics) offers and some (from) other junior colleges. That’s eventually why I chose that JUCO (KCCC),” Young said. “It was close to home, my parents could watch me play and I could get a scholarship at a higher level school after my two years there.”

Young’s parents were happy with his choice to start out at Kansas City Community College.

“We were pleased he chose a community college so he would get lots of playing time his freshman and sophomore years,” Teresa said.

After a successful freshman season in which he averaged 10 points and 5.6 rebounds per game and blocked a total of 17 shots, Young was optimistic of his chances of playing at a bigger program after his sophomore year.

Unfortunately, Young’s plans to earn a scholarship to a Division II school were cut short. Just five games into his sophomore season, Young tore the ACL (Anterior Cruciate Ligament) in his left knee.

“I knew I wasn’t done, but it was really hard on me, that uncertainty,” Young said of the injury. “You’re at a junior college and you just don’t know for sure.”

However, it was that uncertainty which ultimately led Young to become a Jayhawk. Young had the opportunity to play a third year at KCCC after taking a medical redshirt for the remainder of his sophomore season, but decided that it was time to look elsewhere. Young expressed interest to his coach, Kelley Newton, about walking on at a school with a bigger basketball program.

“He asked me where and I said if I could try anywhere, I would try KU,” Young said of his conversation with his JUCO coach.

Through some old connections with Bill Self and other Kansas coaches, Newton was able to arrange a meeting for Young.

Young’s mother and father were supportive of his decision to walk on, but were worried about the uncertainty of it.

“The scary part was that we didn’t know for sure he would be chosen until after all the other teams were filled,” Teresa said. “If it didn’t work out, he wouldn’t have been able to play at any school last year. It was a leap of faith and it worked out.”

That leap of faith ended up being a successful one. A few weeks after tryouts, Young found out that he would be a member of the Kansas basketball team starting with the 2015-16 season. He knew his young Jayhawk dreams were beginning to come true.

“It was pretty crazy, it was unreal,” Young said. “I couldn’t believe it honestly. I remember being super excited and blown away that this might be a real thing. And it ended up happening.”

Young’s family was also excited when hearing the big news. Receiving the phone call from their son late at night, it was not the news they were expecting.

“When he said he was going to be a Jayhawk for sure, we were thrilled and very proud,” said Teresa. “I don’t think any of us went back to sleep that night. We are all honored to be a part of the great tradition of Jayhawk basketball.”

After finding out that being a member of the team could be a reality, the decision to accept the offer was simple.

“It was always the dream to come to KU as a student, but obviously I wanted to play basketball,” Young said. “I never thought that basketball and KU would go together.”

Young has taken on his role being both a student and a walk-on member of the Kansas Jayhawks with great pride. He mentioned that it has taken some adjusting to, but he wouldn’t want it any other way.

“When I played in high school and junior college I played the whole game, every game,” Young said. “It was definitely a big change, but I knew coming into this that this would be the scenario and I wouldn’t change a thing. It’s an amazing opportunity just being on the team is more than I can ask for.” 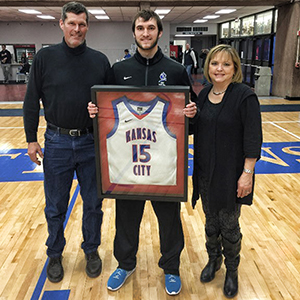 Now in his second year as a Jayhawk, Young considers all of his teammates close friends and has adjusted to being a student-athlete at KU.

“I think last year right when got here, just realizing and playing with this caliber of talent at first (was intimidating),” Young said. “Especially after sitting out a year there was a big adjustment from the previous level I played at, so it took me a little while to adjust and get the game speed. But this year I’m a lot more comfortable.”

Although there were some bumps along the road, Young is thankful and incredibly happy with where he ended up, and so is his family.

“We are proud of the role model he has become,” Teresa said. “Especially for kids from Kansas that all have the same dream he had growing up to be a Jayhawk!”