RCW: From the office of ... Jose Munoz

Kansas former student-athlete and current staff member Jose Munoz spent nearly three weeks at the 2016 Summer Olympic Games in Rio as a volunteer host inside the USOC’s USA House. His memories are too numerous to count, almost the same as his newfound pin collection, each of which are tied to a specific meeting or experience from Brazil. Munoz may have travelled more than 10,000 miles roundtrip to Rio, but he still managed to connect with other Jayhawks and traded for a Kansas Relays pin. Inside his office in the KU Leads wing of the Wagnon Student-Athlete Center, Munoz proudly displays a lanyard weighed down by tiny reminders of one of the best experiences of his life. 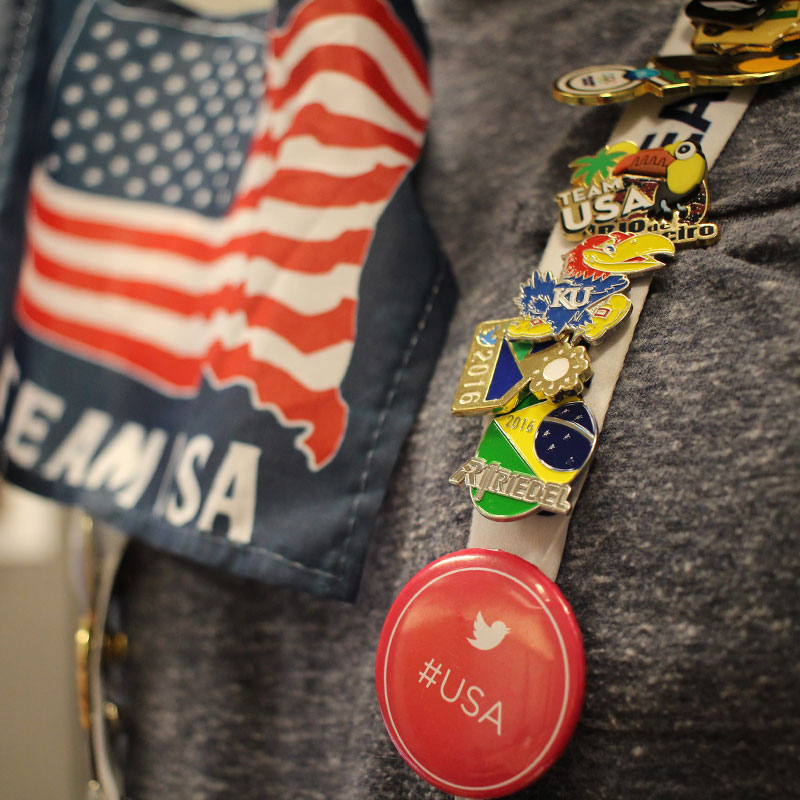 “So you actually trade them. I didn’t know anything about these pins, I didn’t know they were popular. Before I left, (Senior Associate Athletics Director) Debbie (Van Saun) asked me if I could get her one, so first thing I did when I went to the Olympic store was I bought her a pin and I bought myself a pin. That is how I started. At the USA House I saw more people wearing lanyards and their pins and as the games went on people started having more and more pins. I just got into it and you get pretty competitive. My first pin was the USA Paralympic Team pin. After that you start sharing them and you start trading them, pretty much each pin has its own story and it’s a great way to meet people. I got this Mexico pin at the opening ceremony. I traded one pin for two pins and that’s how it pretty much is. This one is pretty cool it’s actually from the judo national governing body so one of the judo athletes was at the USA House and I was talking to him and he was looking at my pins and said, ‘Here, I have a pin to add to your collection,’ and that was really cool. I think my favorite one is the Proctor and Gamble Toucan, I like the bird, the colors.

“It left me with a lot of memories that I can keep and hopefully add on to them. Each one represents a person or experience. I even got a Kansas Relays pin when I was down there. I met two of our official volunteers that were down there and they saw I was a volunteer and they gave me a Kansas Relays pin. I thought that was pretty cool. There was definitely a Jayhawk presence down there. Getting a swimming and diving pin was pretty cool. I met one of the national governing officials down there and he gave me one. These are the most sought after, the ones from the national governing bodies; judo, I had a USOC but I gave it to Jane Fulton as a gift. Each one has its own story and memory behind it. I met a girl and she gave us a tour of the NBC facilities and at the end she gave us a pin, that was pretty neat.

“When it comes to pin trading, it happened everywhere. It happened in front of the megastore or other hotspots with ‘pros’ that set up shop and traded with spectators. It happened informally, while walking on the street of Copacabana. For some, this is serious business, for me it was one of my favorite ways to strike up conversation and make new friends. You can learn a lot about someone from their pins. One of my favorite parts about working in the USA House is the generosity of guests and athletes who gave their pins away to us in exchange for helping them.

“Beach volleyball was my favorite sport to see. I got to see April Ross and Kerri Walsh-Jennings twice. They were late at night games so they were the last match and the atmosphere was amazing, it was like a party. That was my favorite. Besides the beach volleyball, attending the opening ceremony was my favorite event and will never forget it. I was able to experience this magical kickoff to the Olympic Games. I helped myself to the ins and outs of the stadium; despite the heavy security presence. I enjoyed the early quiet of an empty stadium and watched as it flooded with quirky costumes, flags of every color and patriot chants. It was an amazing time, being there and knowing that the whole world was watching. It was a beautiful way to begin the Olympic Games and truly a celebration.

“So when I was down there I was pretty much a host. The USA House is a place where athletes, donors and sponsors get away from all the media, from the Olympic Village – it’s a home away from home. One of my main duties was to make them feel welcome and make sure that they had everything, just be their host. I made sure they all had their credentials and everything was going well while they were at the USA House.

“There are lots of great memories, Rio was a very beautiful place.”