RCW: In a Class by Itself

Each August, college campuses breathe new life into their freshman class with young, eager men and women ready to take on the unknown. These adolescents, a bit timid at first, show up with high spirits, big smiles and lofty goals. Throughout the years those feelings turn into determination, expectation and perseverance as they move toward that next phase in their life.

That same sentiment holds true even on the hardwood as it resonates within Kansas volleyball’s senior class. The octet has experienced it all. From dreaming of making the NCAA Tournament their first year with the program, to setting the expectation of being champions, this group of women has laid the foundation for what it means to be one of the nation’s elite.

All-Americans Kelsie Payne, Ainise Havili and Madison Rigdon, along with Addison Barry, Kayla Cheadle, Tori Miller and transfer players Taylor Alexander and Gabby Simpson, have developed a burning passion for the team and have set high morals for the rest of the squad to follow.

The diversity of this group of seniors, along with their stories, has made it easy for the rest of the team to trail as they take on this season. On one hand, there are transfer players who bring a lot of maturity and leadership after already having experienced being on a collegiate team. On the other hand, there is someone like Barry, who has been humming the Rock Chalk Chant since fifth grade when she started attending KU’s volleyball camps.

“I’ve always been a huge KU fan and the first time that I went to a KU volleyball camp I walked up to (head) coach (Ray) Bechard and said, ‘I am going to play for KU one day,'” Barry said.

Bechard remembers those days like it was yesterday and claims her spirit for the sport has stuck with her.

“She was always there, energetic and enthusiastic, and I think her glass has always been half full,” Bechard said. “I think any chance she has to compete, any chance to be around other people, she’s going to excel because that’s what she does well. She’s a great communicator, great teammate and a great competitor.”

Then there is someone like Payne, a two-time First Team All-American right-side hitter from Austin, Texas. The classic yellow brick road was what came to Payne’s mind when thinking about Kansas. Although Payne had a bit later start into the sport, it was when fellow Austin Junior Volleyball Club team hitter, Madison Rigdon, a 2016 All-America Honorable Mention Selection, committed to play for the Jayhawks that Kansas volleyball really caught Payne’s attention. 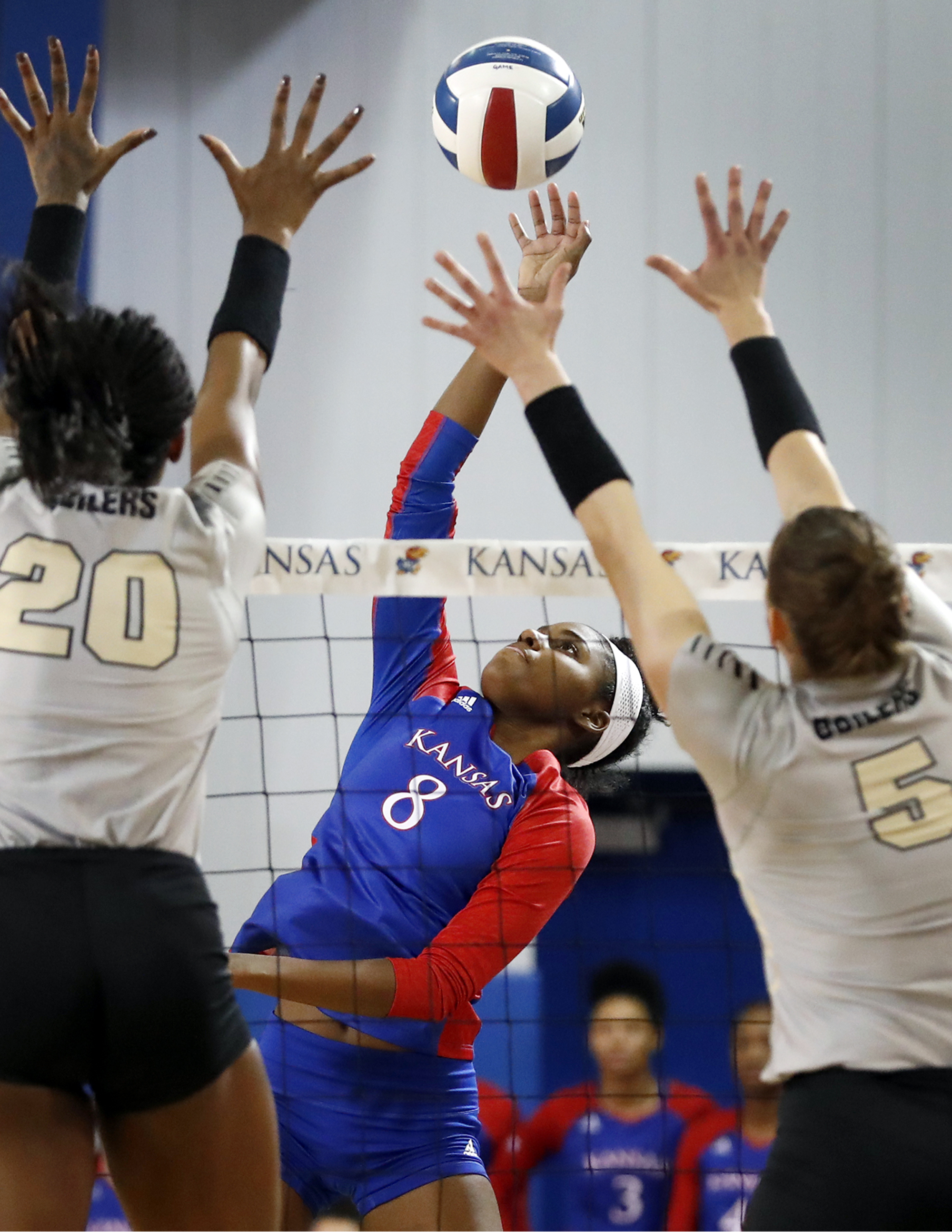 “I met (assistant coach) Todd (Chamberlain) and Coach Bechard, and I just fell in love with the coaching staff,” Payne said. “Then I met the girls and I loved the team.”

As Payne saw herself comparing other schools to Kansas, she knew what the best decision was to surpass her goals as a player, and so did Coach Bechard.

“We trusted that she could be a really good player here for many years,” Bechard said. “I think her confidence grew and her ability to compete grew. She’s made her mark here. We are challenging her and demanding her each and every day to be a little bit better in all areas of her life and in sport. She’s responded extremely well to that.”

There is no doubt that Payne has been able to leave a mark on the team, and grow past her ability as an athlete and a leader.

“I think the overall dynamics of the sport and competition, and being a great teammate, have all had a great influence on her growth and our program’s growth,” Bechard said. “She puts the team first and is successful in that role, and in turn, helps our team be just as successful.”

The influence that the Kansas volleyball program has had on this senior class has been one of a kind. Coming from all over the United States, the seniors have been able to take their lofty goals and stir up a feisty mix. They have generated an incredible amount of chemistry on and off the court that radiates when they play. The support system these Jayhawks have established has helped shape them into the cohesive team they are, and it is the strongest it’s ever been.

“This is the closest we’ve really all been together as a whole group,” Barry said. “Anytime that I’m in a car or eating a meal with somebody I never feel uncomfortable. I can carry on a conversation and feel like I’m really close to the person I’m engaging with. I think that’s huge for when we are in tight or high-pressure situations. I can look to the person next to me and feel comfortable saying, ‘Ok we got this.’ I think just how close we are as a friend group and as teammates–it’s good.”

The seniors’ camaraderie has helped them bond during the endless practices. Building on their playing experiences since their freshman year has helped them learn each other’s timing and now move as one unit on the floor with power. 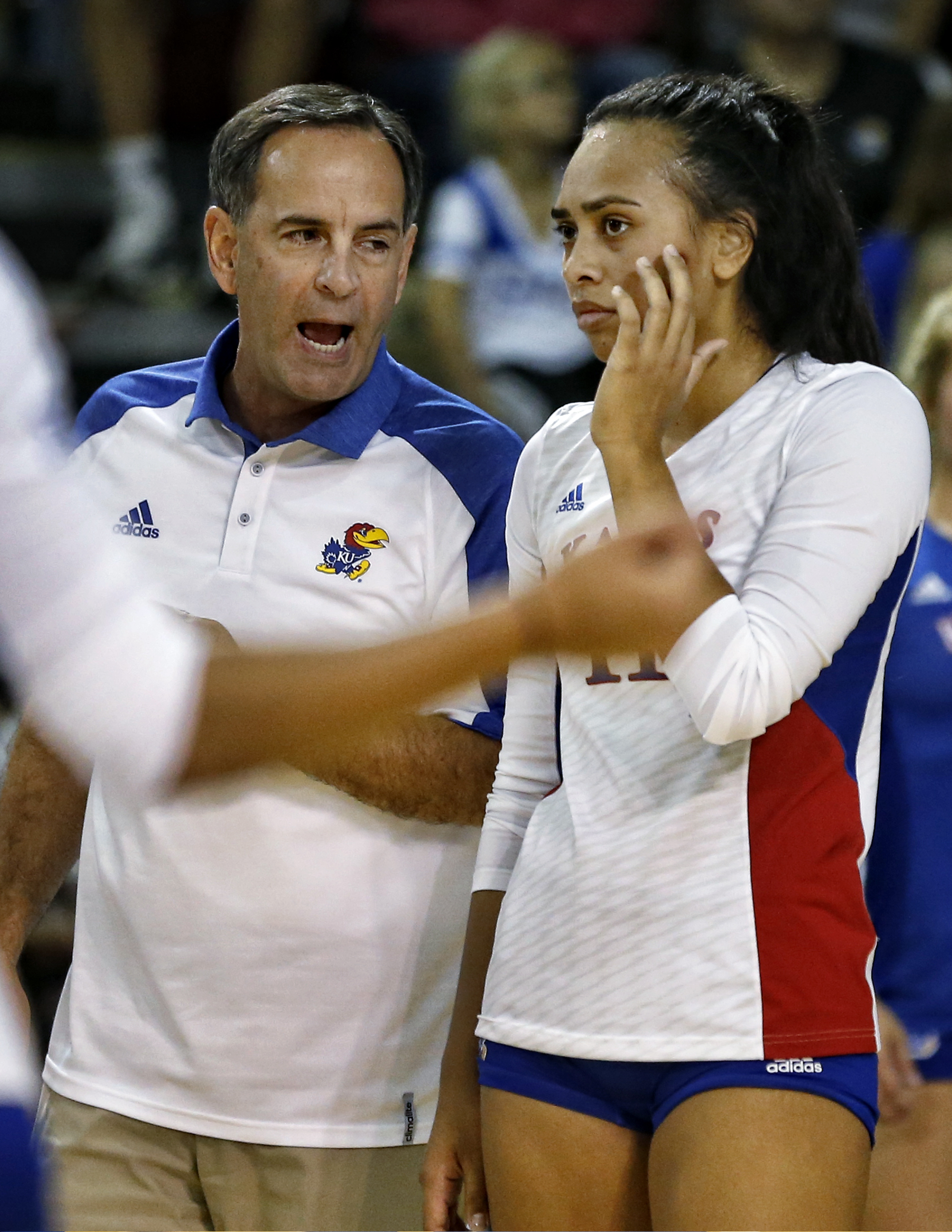 “We’ve always been like a team,” Payne said. “We all work together so well and we all get along so well that it’s like really something that can spread on to the rest of the team.”

The perseverance to get better and grow as an athlete and as a team is bigger and better than ever. The mental approach the seniors have established and brought together to training and to game-day play sets the tone for the team and is a great model for the freshmen to look forward to as they help the team grow as well.

“The level of play has increased so much since our freshman year,” Payne said.

When the team lost Cassie Wait, Tayler Soucie and Maggie Anderson, some key seniors from 2016, the team dynamic changed in a new, electrifying way. They have developed a different atmosphere with pure desire for excellence and assurance that they are capable of achieving great things.

“It’s become a really cohesive unit and they have been through a lot of good times together,” Bechard said. “Hopefully there is some more in store.”

Payne confidently says that when looking at this year’s goals and values for the team compared to past years, one major thing has changed in their minds.

The 2017 senior class has spent the last three years building that backbone from their experiences playing mid-major teams to a Final Four appearance in 2015 and culminating with the program’s first-ever Big 12 Conference Championship in 2016. The seniors set that standard and are able to play with more confidence because of it. 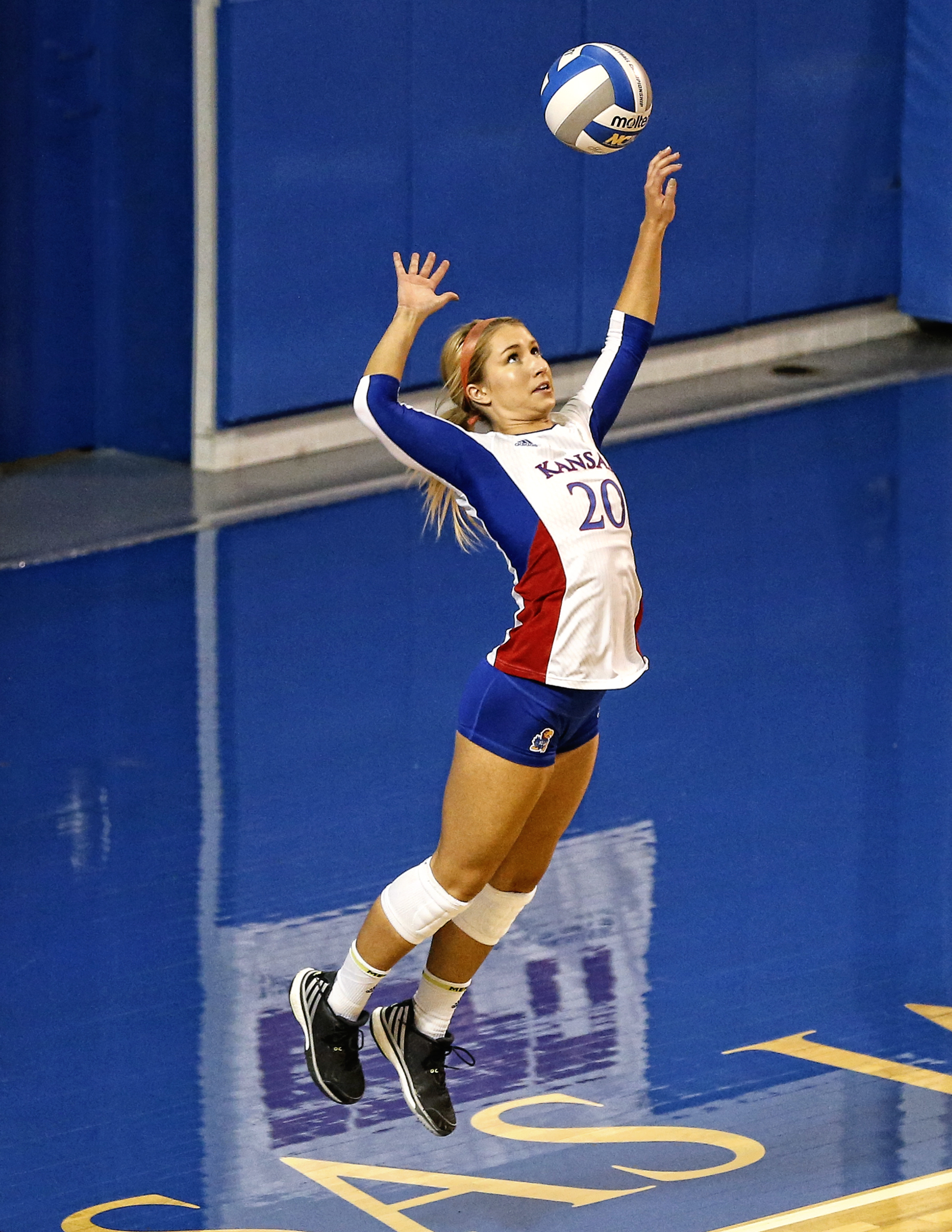 “Now that we know that we are able to do more, we are a better team,” Payne said. “We play with more confidence.”

With that confidence, the seniors now bring a drive to maintain the elite status Kansas volleyball has received.

To execute at the elite level they expect, Bechard and the rest of the coaching staff are setting the bar high for the seniors, and they show no signs of backing down.

“It is our goal to get this group to compete at the highest level they can and get as close to their ceiling as they can; as people, as competitors and as teammates,” Bechard said. “If we can do that then we’ll look at it as a successful year.”

With the increased intensity in training both mentally and physically the Kansas volleyball team is in prime shape for this season.

“I remember we would do drills and it was like, ‘well, let’s just see how far we can get with this drill,'” Payne said. “But now, we are doing drills where it’s like, ‘ok, we’re going to get better doing this drill and we’re going to beat it because we know that we are good enough’. The level of play has really gotten better over the past three years.”

With their final season donning the Crimson and Blue just underway the seniors have been able to transform their time at Kansas and create a strong foundation for the team to excel this season.

“It’s always a process,” Bechard said of this special group. “It’s always fun to be part of that.”