As a high school student at Oklahoma Christian School, a small, private school with roughly 35 students per class, University of Kansas alum Jabari Wamble did it all. He played for a basketball team that consistently made deep runs into the postseason and competed for the speech and debate team, making it to state and hinting at a future career in law. However, where Wamble shone the brightest, was as the lone member of the track and field team, predicating his standout career as a Jayhawk where he is on multiple Top-10 lists for fastest 200 and 400 meter dashes and also qualified for nationals as a member of the second fastest distance medley in KU history. 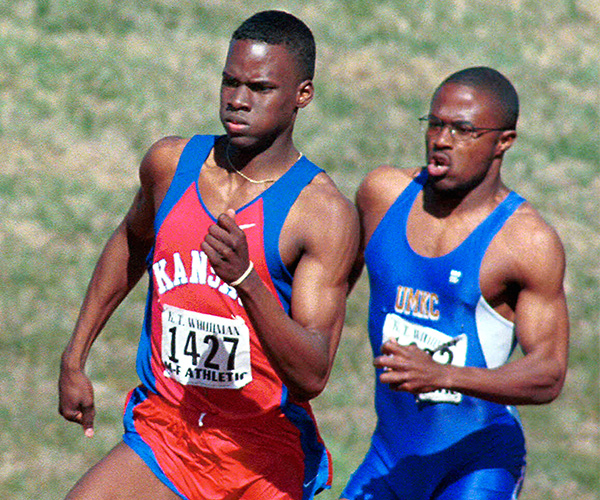 “The majority of the time I was in high school I was literally the only one on the track team,” said Wamble, who graduated from KU in 2002. “We had a gal who went to the same high school, her dad was the track and field coach at a small university in Edmond and they allowed us to practice there. Essentially it was just my coach, who was also my basketball coach, and I.”

Wamble and his basketball-turned-track coach practiced at Oklahoma Christian University alongside college athletes. His daily training, along with a pair of state track and field gold medals, are what started Wamble to thinking he could compete at the collegiate level. Then along came the University of Kansas.

Theo Hamilton, KU’s then sprint coach, visited with Wamble and his family, encouraging young Jabari to visit the school.

“He actually drove down and watched me play in a basketball game and said, ‘Hey, we would like you to come up to KU and take a look at our campus, we would like to host you and your parents,'” Wamble said. “Once we did that, the entire family, we were hooked and we said this is what we ought to do and this is where I’m going. It was pretty much that simple.”

While track and field proved important to Wamble, his time at the University of Kansas also unlocked the door to his true passion: law.

As a child, Wamble was interested in law and order, but while competing athletically at the collegiate level and working toward a Bachelor’s Degree in education, he lost sight of his former interest. Wamble said he was thinking about what he was going to do after he graduated when a conversation with his father steered him back in the right direction.

“He said, ‘Well you know you always wanted to go to law school, what happened to that?’ And I said, ‘You’re right,'” Wamble said. “You get busy in your undergrad and with track and field and it just wasn’t something that I was constantly thinking about.”
Wamble applied and was accepted to KU Law where he graduated from in 2006. It was through KU Law that Wamble landed an internship in the Johnson County District Attorney’s Office in Kansas, which was an experience that opened the door for future employment. 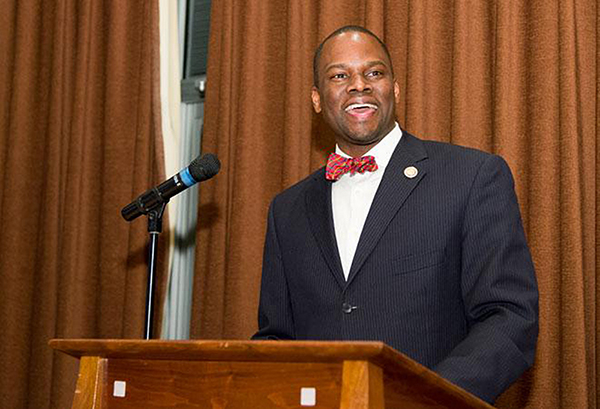 “They treat you as a full-time attorney even though you’re still in law school. You get a special license that you practice under a licensed attorney, so I had several jury trails and 30 bench trials with the judge and the court before I even graduated from law school,” Wamble said. “So I feel like being a litigator, being a prosecutor and being in court was something that I absolutely loved. Fortunately, after my internship they offered me the opportunity to come on full time as a prosecutor, as an attorney.”
Wamble said KU Law did a great job of not only helping him secure his first opportunity in law, but does the same with other students as well.

“The Law School really focused on giving law students the opportunity to get into court and actually do legal work. Johnson County fortunately had a great relationship with the Law School, so it was kind of a pipeline that formed. They have great relationships with Wyandotte County, Johnson County and Sedgwick County. So what the Law School really did a good job of was trying to get folks in the courtroom involved in litigating even before graduating so that you’re a competitive person when the hiring time comes.”

Wamble is now with the United States Attorney’s Office in Kansas where his primary responsibilities include handling white collar prosecution. He also works with the FBI, Secret Service, IRS, Homeland Security as well as many other federal agencies.

While law will always be Wamble’s primary area of interest, he is also a member of the board at Crittenton Children’s Center. Crittenton is a Kansas City Children’s Hospital that focuses on the psychiatric care of children, adolescents and their families. Wamble’s involvement with Crittenton came after a former colleague at the Johnson County District Attorney’s Office mentioned Crittenton was looking for young professionals to apply for board membership.

“He gave me the number, I called CEO Janine Hron, she gave me a tour of the facility and I saw what they do with the head start trauma smart for children. They do foster care, they do mental health counseling and I said this is absolutely something I would love to be involved in,” Wamble said. “I have had the opportunity to be involved for about four or five years now. I think it is just a small way that I can give back and bring awareness to mental health issues that develop in children.

“I had no real previous knowledge [of mental health issues] until the phone rang and I was able to get involved and see that this is something that, as a society, we have to deal with because if these problems are left untreated they just don’t go away.”

“I had no real previous knowledge [of mental health issues] until the phone rang and I was able to get involved and see that this is something that, as a society, we have to deal with because if these problems are left untreated they just don’t go away. I knew that before touring the facility, but after touring the facility and getting to talk with the physicians and the psychologist, it really got me hooked.”

After all that Wamble has done and all that he has accomplished, he still thinks back fondly to his time at Kansas. When asked about one of his favorite memories while at KU, he said it was walking down the Hill after graduating from KU Law.

“My senior year, the track folks were not able to walk down the Hill because we were in the Big 12 Championships that occur on Sunday,” Wamble said. “So I was determined after law school that I was going down that hill and I was going under Campanile Tower because that’s not something that I was able to do in undergrad. That was, for me, kind of the culmination of both undergrad and law school and that the time spent in Lawrence was well worth it.”

Wamble also shared that he bleeds Crimson and Blue and always will. Wamble, who lives with his wife and two children in Lee’s Summit, Missouri, proudly display their KU flag among many neighbors with Missouri Tiger loyalties. He says everyone knows that all the members of the Wamble household are KU fans and they all love the university and they love cheering for whatever sport is in season.

He also recalls the importance of staying in contact with members of the track and field team from both his time as a Jayhawk, as well as those who came before and after him. This prompted his joining the K Club Board, which strives to connect Jayhawks of both past and present. Though, he still notes the bond shared among the team he competed with.

“Just being a part of the team for me was really special and many of us still stay in contact. I think the track and field team is so unique because you get folks from all over the world.”

“Just being a part of the team for me was really special and many of us still stay in contact. I think the track and field team is so unique because you get folks from all over the world,” Wamble said. “All of us are married with children and we still text back and forth with each other on basketball gameday, on football gameday. It’s a bond I think we will have for the rest of our lives.” 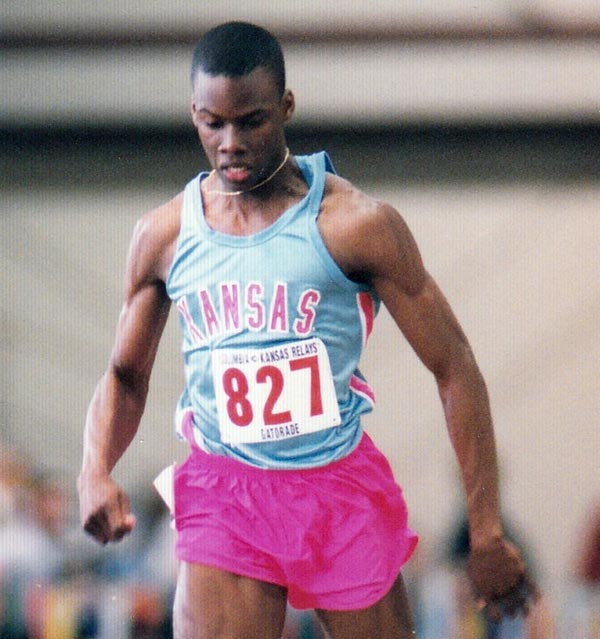 Wamble understands being successful isn’t easy, but he wants others to know they can achieve the same level he did, if only they put the necessary work in.

“I had a really good mentor in undergrad who ran track and went to KU Law as well, his name was Cliff Wiley. I want people to see that you can be a successful student athlete at KU, you can go to grad school and you can do whatever it is that you set your mind to do, you just have to work hard and do it.”

Being a Jayhawk is something that lasts forever for Wamble, who will undoubtedly always be a Jayhawk; however, he wants others to join the Kansas fraternity as well so they can “bleed crimson and blue,” too.

“Whatever I can do to give back to the University and help, I jump at the chance to do it,” Wamble said. “Whether that is hiring KU Law students for our internship program here at the US Attorney’s office that I direct, or whether it is doing mock interviews at the Law School for folks to get them prepared for seeking a job. Whether it is being on the K Club board and getting individuals to get back involved in the University, whatever it takes I’m willing to do it and glad to do it.”