RCW: Once a Jayhawk, Always a Jayhawk: Jen (Fox) Betz 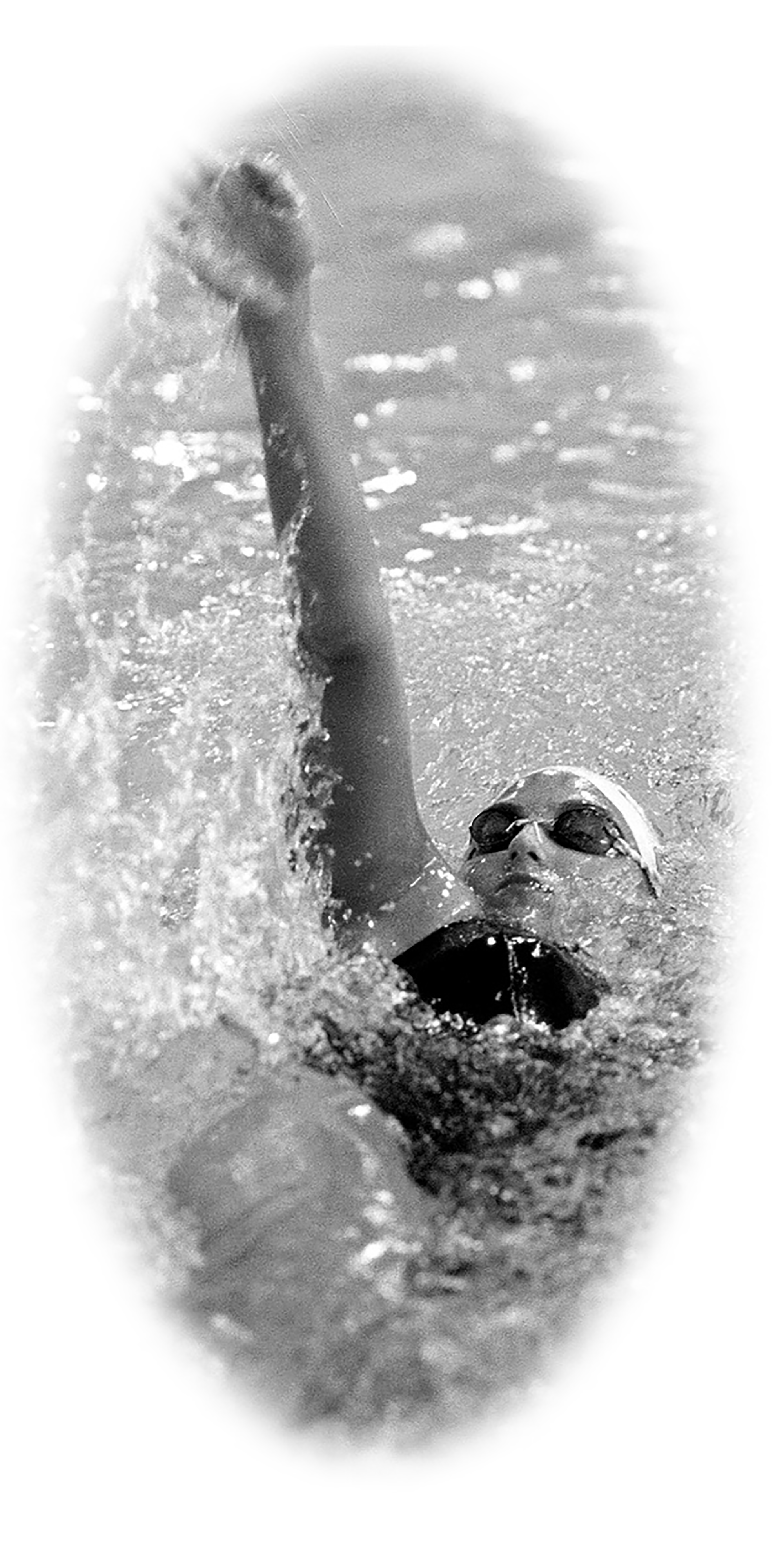 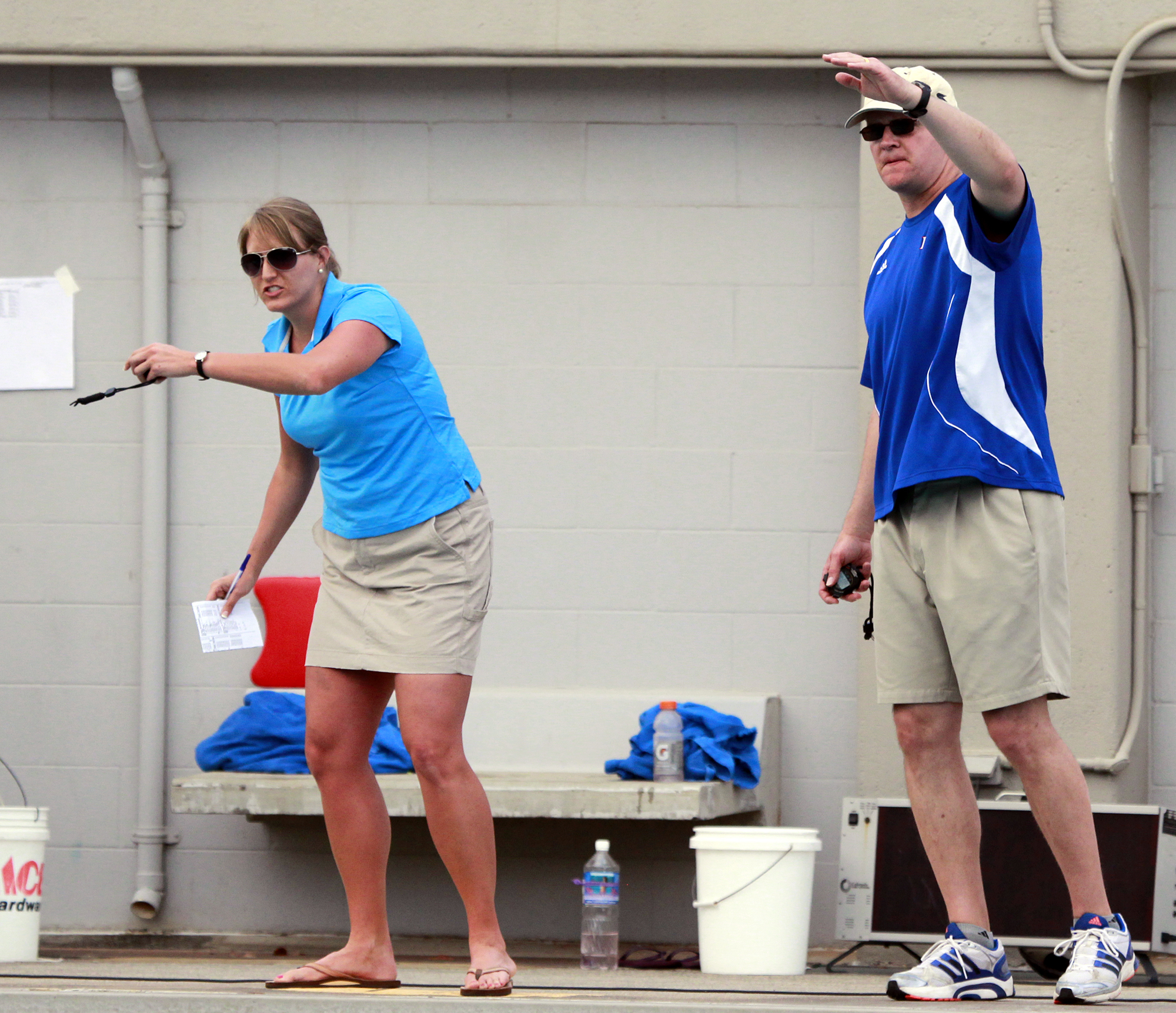 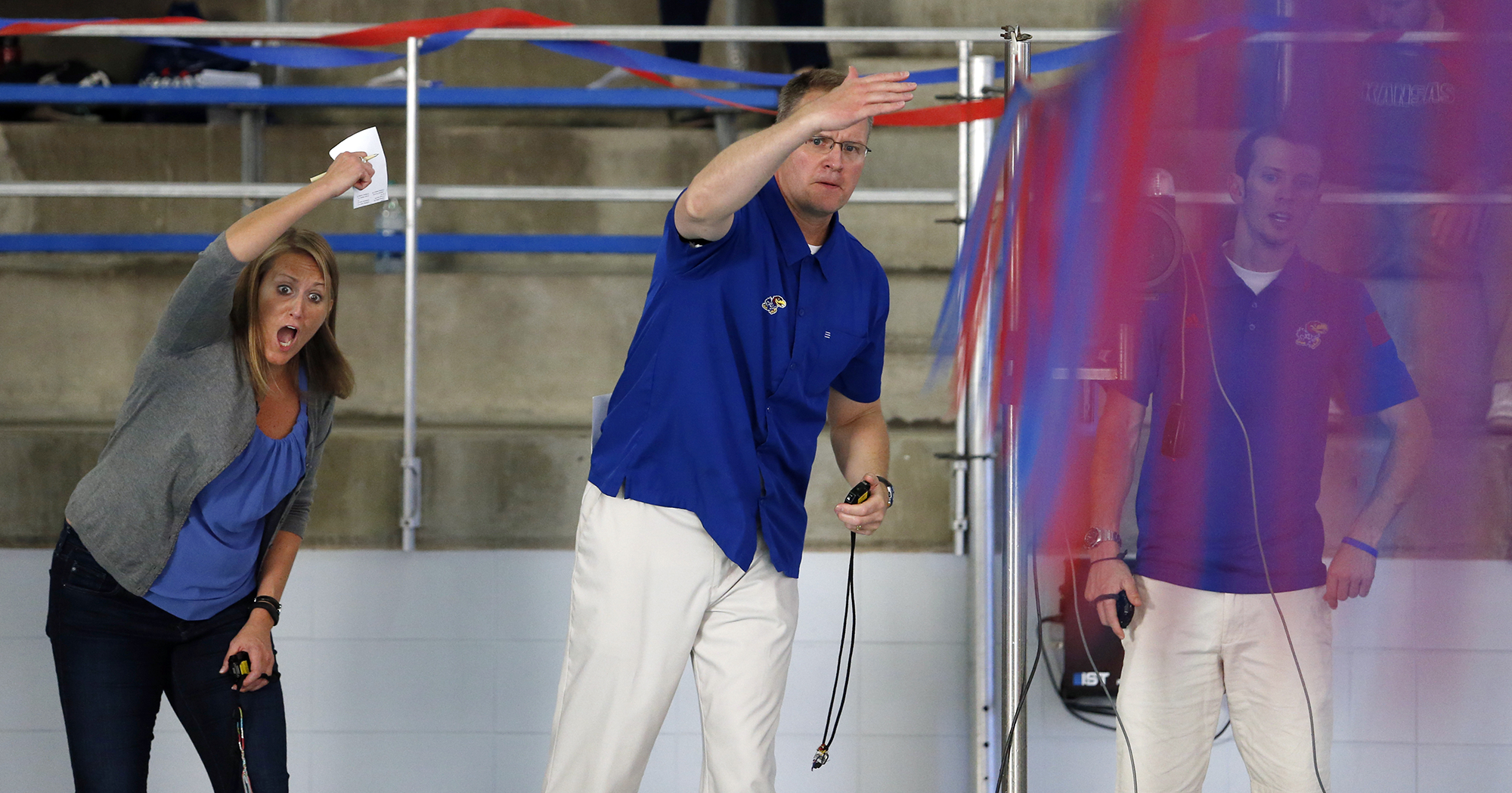 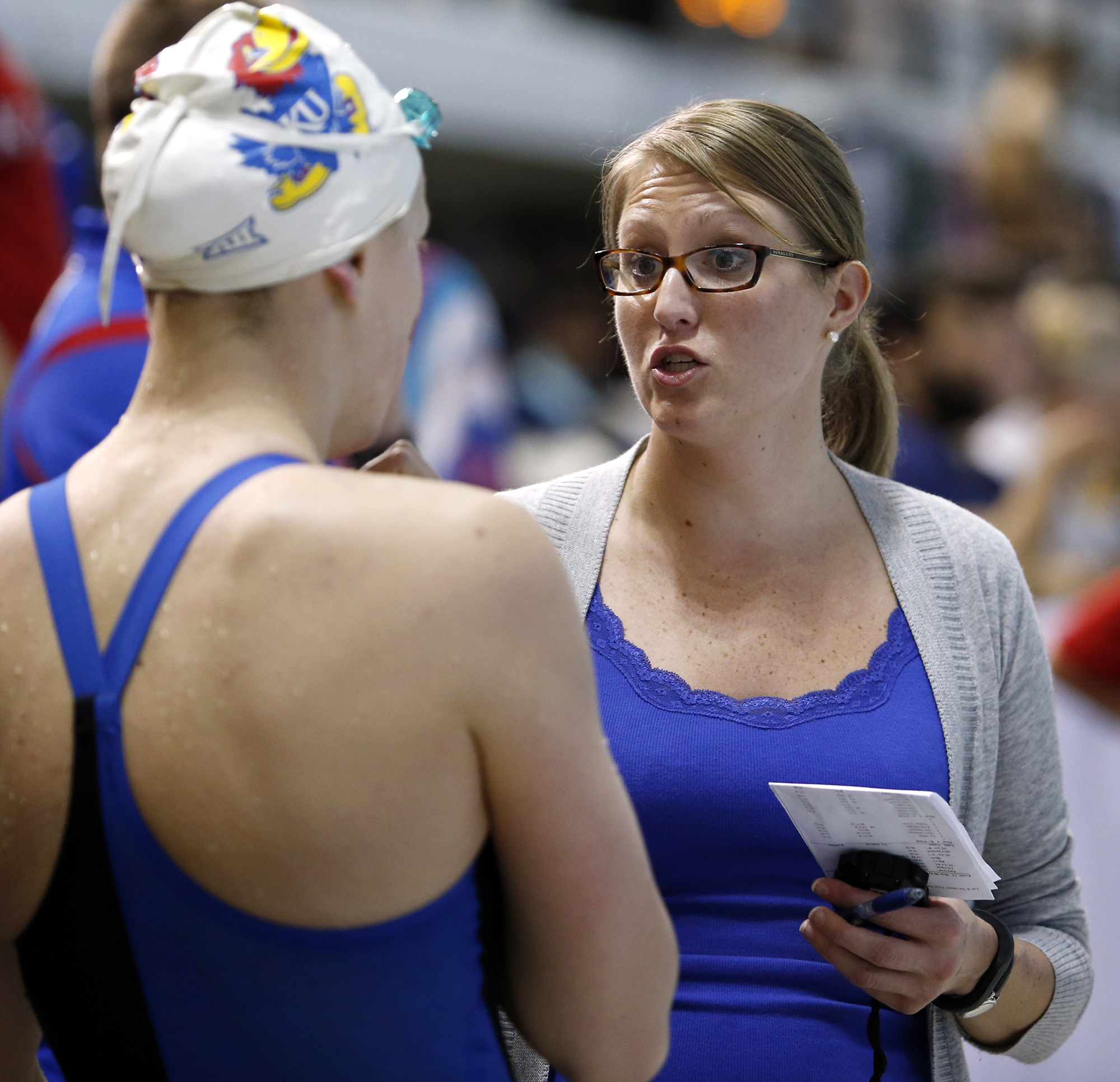 While the opinions of what being a Jayhawk means may vary slightly, one coach at the University of Kansas was able to narrow it down to just four things.

“Being a Jayhawk means family, it means tradition, it means pride to be a Jayhawk and it means loyalty.”

To assistant swimming coach Jen (Fox) Betz, those four qualities are not only the things that initially come to mind about what being a Jayhawk means to her, but four qualities she strives to embody every day.

Betz has invested more in the Kansas swimming & diving program than any former female swimmer. She graduated from KU with a degree in communications and spent her fifth year as a student assistant under former head coach Cathy Burgess during the 2000-01 season. That year, she helped Kansas to a 9-3 dual season record and a third-place finish at the Big 12 Championship.

Following graduation, she worked for Athletes in Action, part of the Campus Crusades Ministry, at the University of Virginia for two years. While at UVA, she volunteered with the swimming team two or three times a week, causing her to realize how much she missed swimming on a daily basis and loved still being around the sport.

The coaching staff at UVA was key to her realization of wanting to coach.

“They were really invested in the sport, they really cared and knew what they were doing,” Betz said. “They took me under their wing and never got tired of me asking questions or just observing.”

At that time, current Kansas head coach Clark Campbell was in his third year at the helm of the Jayhawk program and with the two still in contact, Betz interviewed for the assistant coaching position, was hired and began in August of 2003.

Betz remembers her first day very clearly. She parked over by Hoglund Ballpark and walked into her office inside Allen Fieldhouse feeling like she was still dreaming that she was back home, not only at her alma mater but coaching for the program she competed for.

Betz was recruited to swim at KU by former head swimming coach and assistant athletic director Gary Kempf. In her four years at KU from 1996-2000, she was a seven-time scorer at the Big 12 Championship.

She finished her career as a Jayhawk with KU’s third-fastest times in the 50, 100 and 200-yard freestyle swims, recorded all in her sophomore season. Throughout her four-year campaign, Betz notched four top-five finishes at the Big 12 Championship, including two third-place finishes; both coming in her freshman year in the 400 and 800-yard free relay.

Since her collegiate swimming career finished, Betz has made the transition from former student-athlete into successful NCAA Division I swimming coach, but it wasn’t an easy one. She realizes how much she has changed and grown as a coach over the last 15 seasons.

When she first started, she had to acknowledge that she was still only a year or two older than most of the swimmers or athletes or student-athletes on her team.

“My mom had just passed away (before I moved back to Kansas), so I was in a very different stage of life,” Betz recalled. “I hope that over the 15 years I’ve grown with confidence, maturity and professionalism.”

Campbell confirmed Betz’s hopes, and says he’s seen her grow as a coach throughout their years coaching together. He remembers the difficulty she encountered when having to make the switch from former collegiate athlete to collegiate coach.

“Definitely, in the 15 years, there’s been a ton of maturity,” Campbell said. “I’ve seen her grow in that way initially and each year, getting better and better in all different facets of the job. Whether it’s on-deck coaching, recruiting, administration, etc., I’ve seen her become more confident as the years go by.”

As Betz is in the middle of her 15th season as assistant coach, she’s had a few moments that stick out in her mind about being back at KU and being a coach.

“I think one of the neatest coaching moments of my career was when Chelsie Miller finished in eighth place in the 400-yard IM at the NCAA Championships in 2016,” Betz said.

Betz worked closely with Miller before the race, who earned First Team All-America honors with that eighth-place finish.

During the 2015-16 season, Betz helped coach Kansas to its highest point total in Big 12 Championship history and a second runner-up finish in three years, and saw the team improve that point total and post another second-place finish the following season. She was also named as a finalist for CollegeSwimming‘s Assistant Coach of the Year Award in 2015-16.

Aside from that, Betz has truly enjoyed working with Campbell for 15 seasons and has seen how not only the two of them, but the team, as a whole, has grown.

“(It’s been great) to see how we have both changed and grown and balanced each other out throughout those 15 years,” Betz said. “We’ve also seen the (team) culture change, and that’s been one of the neatest things. It’s not perfect, but it’s neat to see where the team is now.”

Part of the reason the team has gotten to where it is now is because of the effort that Betz has put in over her tenure in the swimming & diving program.

Campbell says that Betz brings several things across all facets of the team. Not only is Betz an assistant coach, but she serves as the recruiting coordinator and has taken on the role Director of Operations role as well.

“She’s our recruiting coordinator and within the college (coaching) profession, recruiting is your lifeblood. She brings so much in attracting new student-athletes to our program,” Campbell said. “She does really good work making sure that both in practice and in meets there’s a lot of energy. She brings a lot of passion and getting the kids excited about performing.”

Betz has already left an unparalleled mark on the swimming & diving program, as she will be known as someone who worked hard and that cared, not only about the program as a whole but for each of the athletes individually, and ensured the program got better every day of every year.

“It’s not about just you when you walk on that pool deck,” Betz said. It’s about former athletes, former swimmers, current swimmers, future swimmers and making the program better.”

She has also left a mark on her nine-month-old son, Charlie, whose favorite mascot is already the Jayhawk. Betz married her husband, Tate, a Kansas State Wildcat, in November of 2015. While the split household has another on the way, that little one’s favorite mascot is still up in the air.

As for Charlie, Betz said, “He doesn’t have much of a choice (but) to be a Jayhawk.”