RCW: The building of a legacy

With the recent success Kansas volleyball is seeing, popularity is skyrocketing and the atmosphere is electric, something fans won’t experience any place else.

It’s cold. University of Kansas head volleyball coach Ray Bechard walks into the gym for the first time in May and a shiver runs through his body. Maybe because the thermostat is set to a cool 65 degrees. Horejsi looks different. It is not the same as when he left it last season. It is fuller. Hanging above him, attached to the metal rafters, a banner dangles – in bold block letters “Final Four 2015” it reads. He catches a glimpse of it, smiles and keeps on walking, focused on his task at hand.

Horejsi Family Athletics Center squeezes 1,300 fans as close to the volleyball court as possible, with a short seven feet between the benches and the first row of the stadium seating. The atmosphere is electric and intimate, simply unmatched by any other school in the Big 12 Conference.

“Every time they score, the team gets hyped and the fans are great,” Kansas men’s basketball junior point guard, Devonte’ Graham, exclaimed. “With a place like Horejsi it’s all so close, the fans are right there on the court.”

The players love this place. And opponents fear it.

“Horejsi is an advantage once you get used to playing in there. Other teams hate coming here to play. I have heard from multiple girls from different teams that it’s a really hard place to play in,” senior libero Cassie Wait explained. “There are a lot of gyms that are bigger and that may have more fans, but because they are spaced out, it’s not as intimidating. Horejsi builds on the brand that KU Athletics is a family and our team thrives in that environment. Our fans, our people, the band, the cheerleaders, are just an extension of who we are.”

Last season, this place gave birth to the most successful season in Kansas volleyball history. Unprecedented. This year, Horejsi will once again burst with energy from a sold-out crowd. Season tickets are sold out for all home games in 2016. The popularity of Kansas volleyball has exploded after the team’s unprecedented season in 2015. Horejsi saw a record 14 sell-out crowds last year, leaving only two home matches not sold out. Students who once were able to walk in mid-game were forced to stand in lines, waiting hours before doors opened due to overcapacity. Kansas volleyball’s social media numbers have grown by the thousands. Facebook and Twitter alone have made over 12 million impressions versus the one million last season. The program has seen a 30 percent increase in attendance for the Kansas Volleyball Summer Camps, and to top it all off, Kansas is recognized as the regional leader in volleyball culture. 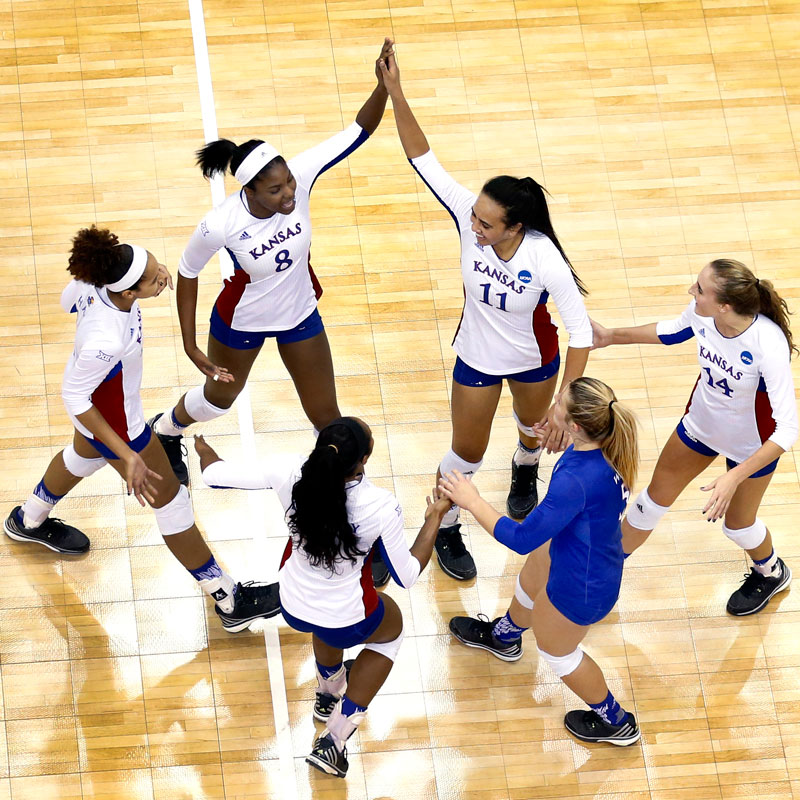 This sudden increase in popularity should not come as a surprise as last season was truly unprecedented. Kansas volleyball left its mark and made major adjustments in the history book. The team had the highest winning percentage in program history (.909; 30-3), the highest ranking in program history at No. 4, the best postseason finish in program history by advancing to the Elite Eight and Final Four, both for the first time. The Jayhawks had the best start to a season and longest winning streak of 19-0, and ranked fourth nationally in hitting percentage, first in kills per set, and first in assists per set. For the first time ever, Kansas also produced two First-Team All-Americans in setter Ainise Havili and right-side hitter Kelsie Payne.

This success should be expected since the team is coached by one of the best staffs in college volleyball. PrepVolleyball.com and Hero Sports named Bechard National Coach of the Year and assistant coach Laura “Bird” Kuhn was honored as the AVCA National Assistant Coach of the Year.

Bechard is no stranger to winning. Before Kansas, he had one of the most decorated coaching stints at Barton County Community College. After his 13 years spent in Great Bend, Kansas, Bechard came to Lawrence.  Now entering his 19th season at Kansas, Bechard has been persistent about making Kansas volleyball a regional force to be reckoned with.

Bechard’s resume at Kansas is highlighted by KU’s first NCAA appearance in 2003, followed by an undefeated nonconference schedule and second NCAA Tournament appearance in 2004 and another NCAA First Round appearance in 2005. In 2012, the Jayhawks finished No. 25 in the AVCA rankings and advanced to the second round of the NCAA Tournament. Based on the team’s achievements that season, Bechard earned himself Big 12 Coach of the Year honors. Just a year later, 2013 produced similar results as the previous season, only better. Kansas ranked No. 17 in the final AVCA rankings, the highest-ever national ranking for the program and advanced to the NCAA Regionals. Bechard was awarded Big 12 Coach of the Year for a second year in-a-row.

It is not as if Kansas volleyball has been hiding in the woodwork. The team has been strong in years past and made a name for itself. Last year was different though, as all the ducks just fell in a row.

“There’s no earth shattering revelations from 2010 and 2011 to where we’re at now. We’ve just got players now that are committed to what we’re trying to do. We’ve gotten a little mentally tougher as the years have gone by, and we’ve got good volleyball players. When you get better volleyball players, you’ve got a chance to do better things,” Bechard added.

Regionally, volleyball has reached new heights. Bechard believes that the other thing impacting where the Jayhawks have been the last few years is that volleyball, as a whole, is better in our region of the country. He thinks that it would be very difficult to have a nationally-ranked team year after year if there is not good volleyball regionally. 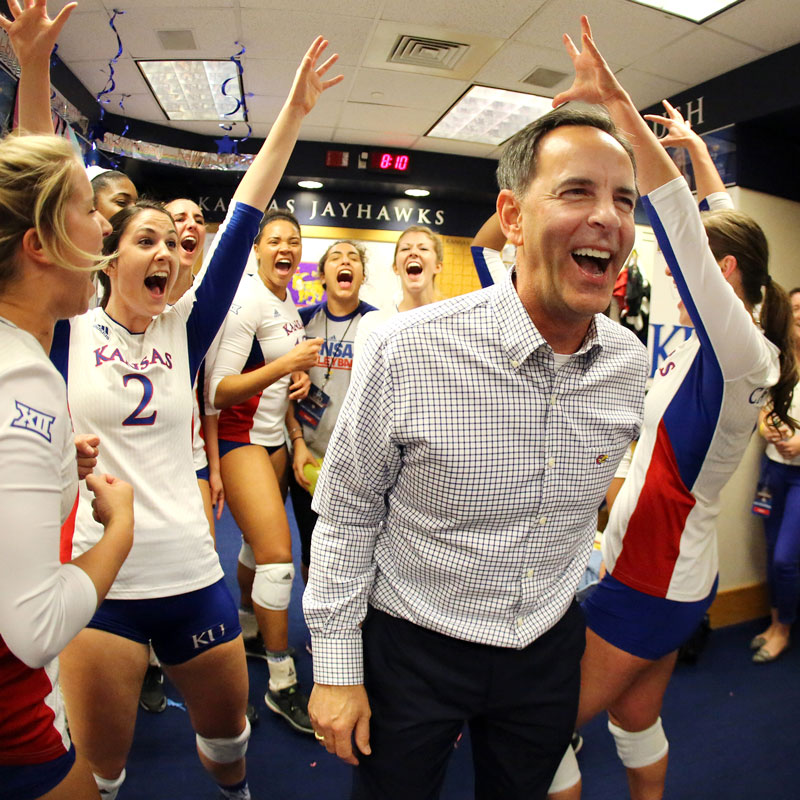 This year the Jayhawks have four players representing their home state of Kansas in seniors Tayler Soucie and Cassie Wait and juniors Addie Barry and Tori Miller. As volleyball becomes more popular regionally, clubs and high schools begin producing more talented players who can compete at the collegiate level. Having high quality volleyball players locally increases the competition in the area feeding into collegiate programs, making those programs stronger and more competitive. For Kansas natives, it is exciting to see players from their Kansas towns competing for their state University.

“It’s always more fun to cheer for someone who comes from where you do. If they are representing your hometown that’s a pretty cool thing,” Kansas volleyball fan Dalton Jorns mentioned.

All three of the returning seniors are from the Midwest including Wait, Soucie and serving specialist Maggie Anderson. While Wait and Soucie were raised within the state borders, Anderson came to the Sunflower State from nearby Nebraska to fulfill her dreams of playing collegiate volleyball.

Wait concluded, “I’ve lived my whole life here and (have) seen the sport grow year after year because of a little bit of success, even four or five years ago, volleyball has been growing across the board. As one program gets better it raises the level of play – and everywhere else around kind of clings to it.”

With a little success, Kansas has attracted fans in the Lawrence community and beyond. Young fans, especially young female volleyball players, are looking up to Kansas players and aspire to be just as successful as them. Girls are getting the chance to watch their idols on TV and follow them individually on social media. Fans are influenced by the team’s success and want to be a part of all the excitement.

“I think, obviously, success is going to be a generating factor in popularity. I mean look at our basketball team, repetitively (winning) year after year after year. I think that’s something that’s engrained especially in KU fans, that they are going to go out there and support teams that are going out and making a difference and making a name for our school and what we are representing,” Wait pointed out.

Kansas volleyball is turning sport fans into volleyball fans. Bechard and the team are excited to have such loyal fans that want to come out and support them this season. Above all the winning and record-breaking, they are excited to have a program that the students, the other student-athletes, KU fans and the University can be proud of.

“When people say, “Kansas volleyball” and KU alumni, or a student, or a former player feels good about that or gets warm and fuzzy, that probably makes me feel best about our recent good fortune,” Bechard explained.

With an impeccable last season, it can be hard for the team to determine what success looks like this year. Bechard said the team has set goals, but he reiterated that the practice plan is similar and that the Jayhawks are going to remember where they came from and who they are as a team. He and his staff have talked about the importance of remembering how the team got to where it is they wanted to be and what they had to do to get there, rather than worrying about what it is like to be there. He knows his team is willing to give all the effort and with the team on the same page, the team will be successful. Bechard believes that they had a successful year if they can say they got everything out of this team that they thought they could.

Wait mimicked Bechard’s thoughts when she said, “Being successful for us is knowing that we went out and gave ourselves the chance to compete at the highest level we are possibly capable of. It’s not necessarily the wins and the losses. It’s being able to put all those little moments, those times where we took a step forward in a match, where we do something better than we’ve ever done before. That’s what unprecedented is this season – each of us being able to do that one skill or a couple of skills better tomorrow, or a week from now, or in a match two months from now. That way when we get to where we want to be, we’re doing those things consistently.”

For right now, it’s back to 65 degrees. The place where the banner hangs. For the team, it is focused on the goals at hand, getting a little better each day. They are taking charge of the opportunities presented to them one day, and one ball at a time.