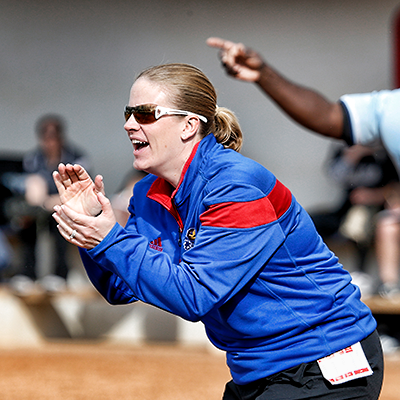 Since the beginning of her tenure as the Kansas softball coach in 2010, Megan Smith has focused on helping her players succeed at something much bigger than the game of softball.

The Jayhawk Way encompasses six core values that the Kansas softball program lives by. These guidelines serve to help these student-athletes find success both on the field and off.

Composing these six values was simple for Smith. After she first arrived in Lawrence, she asked herself a series of questions.

Smith connects all of these characteristics into the team’s mantra.  These goals: striving for excellence both on and off the field, working harder than any other team in the country, taking pride in your academics, taking care of each other and supporting each other, being a champion on and off the field and being positive and having fun make up the identity of what it means to be a Jayhawk.

“I just thought of characteristics that are so important to me and were to my development as a student-athlete and thought this is the way we’re going to do things,” Smith said. “This is The Jayhawk Way.”

Smith’s method has proven successful throughout her time at Kansas.

On the field, the Jayhawks earned their sixth-straight 30-win season in 2016 in addition to Chaley Brickey being selected in the National Professional Fastpitch draft, the second selection in Smith’s time at KU.

In the third round, as the 16th overall selection, Brickey went on to play with the Pennsylvania Rebellion during the summer of 2016.

Prior to her professional career, Brickey was named a three-time National Fastpitch Coaches Association (NFCA) All-Region selection and by the end of her collegiate career had claimed Kansas’ all-time walks (145), RBI (157), runs scored (175) and slugging percentage (.645) records.

To top off her time at KU, the shortstop nabbed her fourth All-Big 12 Conference honor joining Shelly Musser (1999-2002) as the only two Jayhawks in program history to earn league accolades in each of their four years played at Kansas.

Now working as a student assistant coach with Kansas’ softball program, Brickey’s extensive experience on the field has made the transition from player to coach fairly easy.

“I’m trying to switch to a different side where I can help without being on the field,” Brickey said. “It’s hard not to be able to help in the ways that I want to. I want to be able to go out there and have an at bat to help the team. I want to go field ground balls to help on defense, but I can’t do those things.”

Crediting The Jayhawk Way, Brickey saw the impact it had on her time as a student-athlete.

She came in with an understanding of why each characteristic of The Jayhawk Way was important, but further developed each ideal in her four years wearing a Kansas uniform.

“Working hard for someone like Coach Smith is a lot easier,” Brickey said. “She makes you want to work harder and want to do extra because she’s someone that you respect and look up to. You want to do your best for her and the program.”

Beyond the field, Brickey says The Jayhawk Way has been key in her other successes.

While Brickey’s role for the Jayhawks has changed, she remains a crucial part of Kansas’ success.

Kansas softball’s academic achievements have been recognized since Smith’s first year with the team. In her eight years with the Jayhawks, 38 student-athletes have received Academic All-Big 12 honors.

Additionally, Maggie Hull-Tietz received national recognition for her achievements in the classroom as she was awarded Capital One First-Team All-American in 2013.
The All-American also earned three Academic All-Big 12 awards in her time wearing the Crimson and Blue.

Hull-Tietz’s academic accolades are equally impressive as her standout performance on the field. During her time as a Jayhawk, Hull-Tietz broke KU’s batting average record two seasons in a row ranking her third all time in the Big 12 at .456.

The former outfielder earned the Big 12’s inaugural Softball Co-Scholar Athlete of the Year Award in 2013 to top off her time as a Jayhawk. She was the first of three Kansas athletes to hold the title from 2013 through 2015.

Now Hull-Tietz is back with the KU softball program serving as the Director of Operations, where she plays a key role in promoting and executing The Jayhawk Way lifestyle.

“I think the legacy has been left these past eight years,” Hull-Tietz said. “Having stepped away after I graduated and now coming back to see it this year especially.”

As a member of Smith’s first team at Kansas, Hull-Tietz got to see The Jayhawk Way develop firsthand.

In her current role on KU’s staff, the Lawrence native plays a large part of developing and molding this mindset with the team. Hull-Tietz oversees The Jayhawk Way Council, which contains six members of the 2017 team. The council replaces the typical captain system used with most athletics programs.

Each player voted on which teammate they thought best embodied each individual characteristic in the Jayhawk Way. These six individuals range from freshmen to seniors to transfers.

“It’s a very diverse group of people so it was really cool for me to see the people on the team that they look up to in these different areas,” Hull-Tietz said. “I think they are all really deserving of sitting in that seat for the Jayhawk Way Council.”

The purpose of The Jayhawk Way Council is about more than being a leader. Each individual comes up with ideas of how they can better live out their characteristic both individually and as a program.

One characteristic that continuously stands out among this team is family and Smith has experienced this firsthand.

After moving to Kansas from Louisiana, while leaving her relatives behind in her home state of North Carolina, Smith had no family here beyond her husband and son.

In 2011, after a long bout with cancer, Smith’s husband passed, leaving her and the couple’s son, Cooper, behind. Kansas stepped in to fill the family role.

Family is a large part of what makes this program so unique and the focus this year has been on that.

“I think the team culture is huge, this year especially. The team gets along great and I think a lot of that has to do with them being good people,” Brickey said.

The coaching staff recognizes that they’re working with a diverse group of girls. From freshman through seniors, these student-athletes are from all different backgrounds coming from eight different states and two other countries. The family focus began in the fall at their team-bonding weekend.

“I think doing that early on in the season, despite having new players really set the tone for our family environment,” Hull-Tietz said. “We wondered what was going to happen when we got to the season or what would happen when times got hard, but this team has continued to embody The Jayhawk Way throughout the ups and downs of our season so far.”

Along with their more family-focused team dynamic, Kansas softball has been working on a more simplified version of The Jayhawk Way. Instead of sticking with the six different lines, they shortened it to six words.

What once was “strive for excellence both on and off the field” became “excellence” and so on.

“This year, instead of having the whole Jayhawk Way posted in different places and in their player manuals and things like that we’ve really emphasized those six words,” Hull-Tietz said. “We’ve done things differently, specifically with those six words, which is still The Jayhawk Way, we’ve just simplified it and made it easier to talk about.” 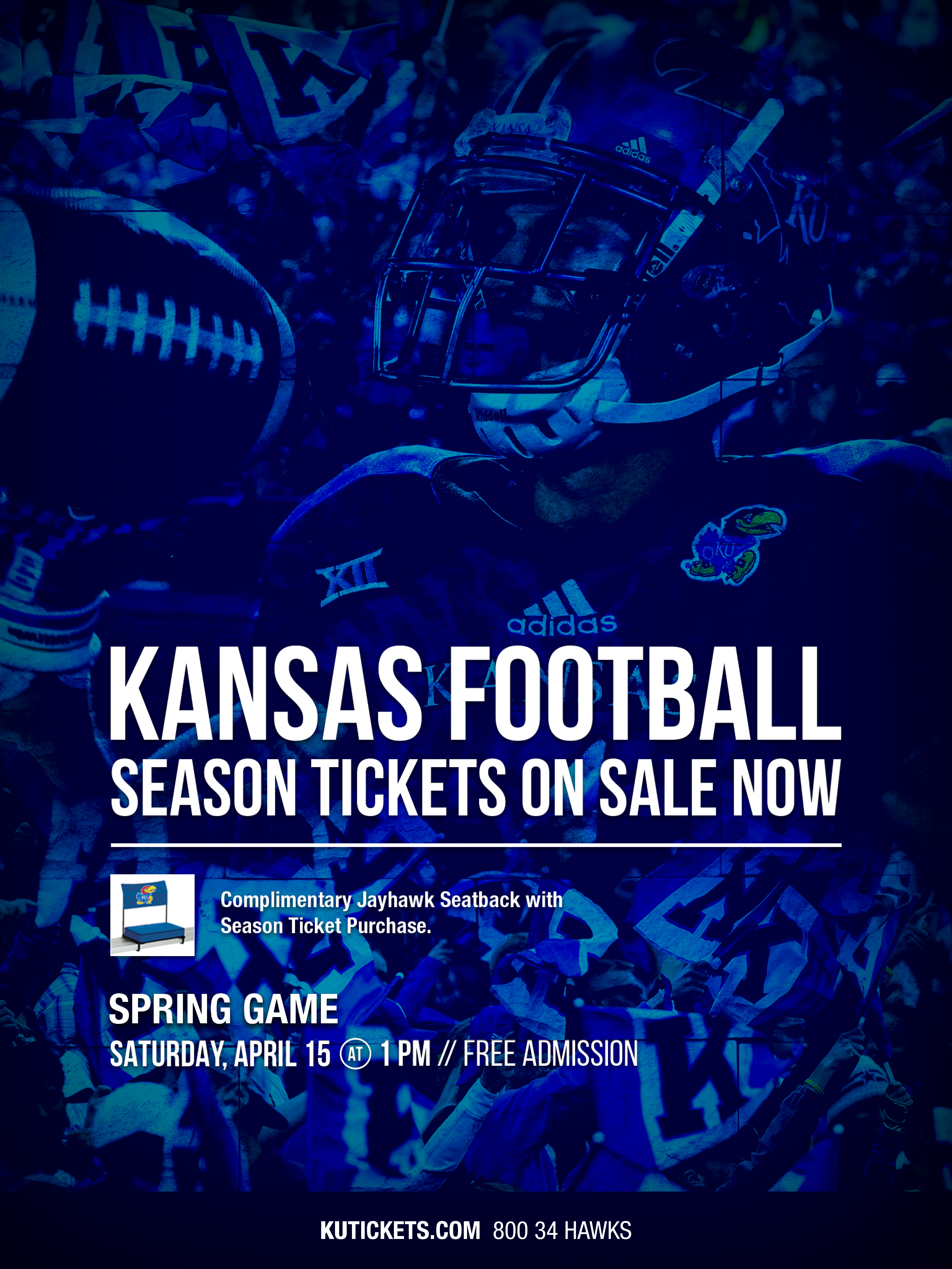 The Jayhawk Way was a primary focus of the team’s fall bonding weekend. Prior to the weekend, each member of the team was asked to choose one of the six words from the Jayhawk Way they wanted to focus on for the season.

At the event, each player was surprised with a bracelet with their chosen word on it as a reminder of what their goal was for the season.

“The Jayhawk Way just became more a part of our language this year than in any year previously,” Hull-Tietz said.

Though changes and updates have been made, the ideals of The Jayhawk Way have remained the same.

“She (Smith) wanted to raise the standard for the program not just on the field, but off the field as well,” Hull-Tietz said. “We strive for excellence in everything we do, both on and off the field. We take pride in our academics, it’s a family environment, all of those things that are just so much bigger than the game of softball.”

One Jayhawk fits this philosophy perfectly. Senior Taylor McElhaney came to Kansas in 2014 as a shortstop, but wouldn’t fill that role until this year, her final season donning the Crimson and Blue.

As a freshman, KU already had an All-Big 12 shortstop and a senior second baseman so immediately McElhaney was faced with adversity.

“Part of the Jayhawk Way is being a team player, knowing that you’re a family, supporting your teammates, being positive with your energy and doing what’s best for Kansas and not for yourself,” Smith said.

McElhaney chose to live The Jayhawk Way and unselfishly filled any role that the Jayhawks needed her to for the past three seasons. Now, finally playing her primary position, McElhaney shows her teammates and everyone she meets why The Jayhawk Way and Kansas softball are both about more than numbers.

“It’s about how you are as a person, as a teammate, how you’re going to grow through adversity,” Smith said of how McElhaney has filled different roles for Kansas softball. “I think she was a prime example of that as a freshman and has continued to be a good example of The Jayhawk Way.”

In addition to McElhaney, many former Kansas softball players have taken these ideals to heart and are now continuing to live out The Jayhawk Way in their professional lives most notably, Hull-Tietz.

“You see every characteristic of the Jayhawk Way you see in Maggie and I certainly saw it when she was a player too,” Smith said. “She’s a one-of-a-kind person.”

Hull-Tietz is living proof for the current players that The Jayhawk Way works and it’s worth buying into it.

“Having her back has just been phenomenal, not only to have her on staff, but to have that example for our players,” Smith said. “She was an All-American so she was the best you could be on the field, but she was certainly the best off the field as well. Sometimes that’s hard to match, but she’s got it.”

Among those other former Kansas softball players who embodies The Jayhawk Way is Maddie Stein, a 2015 alum, who is still speaking at conferences for athletes while getting her Master’s Degree at the University of Oklahoma and color commentating for KU television broadcasts.

“She’s representing Kansas at the NCAA conferences to speak out on student- athletes’ needs and wants,” Smith said. “She’s of high character and very driven.”

There are countless examples of student-athletes who lived and are still living by, The Jayhawk Way.

“It’s hard to even nail down those few and I’m leaving out a lot,” Smith said. “These characteristics just aren’t about softball, it’s about their life. You can see that when they leave here and are successful in their careers.”

“When I see a player develop on the field, we know they’re going to do that. But when we see them develop as an unbelievable person, leave here and be great at their job as a mother, wife, lawyer, nurse or whatever they’re going to choose to do, that’s the most exciting thing,” Smith concluded. “We hope that they learn some of these lessons through sport, through softball, but also through our values as a program.”