RCW: We Not Me

Libero. Law student. Award winner. These are just a few of the titles that Cassie Wait was known by.

Serving as the primary libero for three of her four years at the University of Kansas, Wait helped to lead the Jayhawks to a 2015 Final Four run and 2016 Big 12 Championship. The Gardner, Kansas, native finished her career with 104 victories, the program’s best four-year winning percentage (.819), while ranking second in career digs at Kansas (1,958).

After earning the titles of Big 12 Libero of the Year, Big 12 Volleyball Scholar-Athlete of the Year, Kansas City Sports Commission Sportswoman of the Year, AVCA All-American and a nomination for NCAA Woman of the Year, Wait left some big shoes to fill at the starting libero position for the Kansas volleyball team in 2017. Four Jayhawks are up for the challenge. 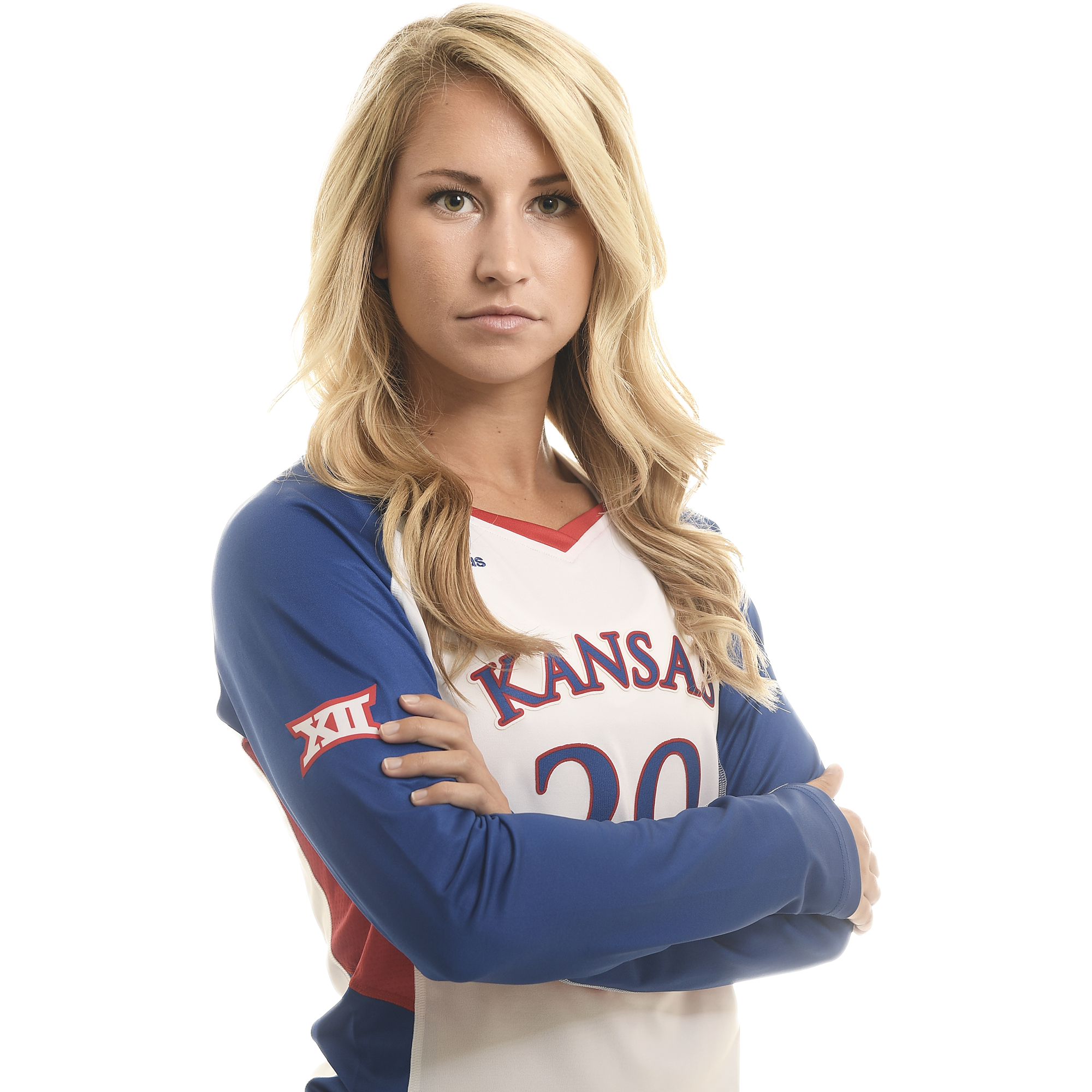 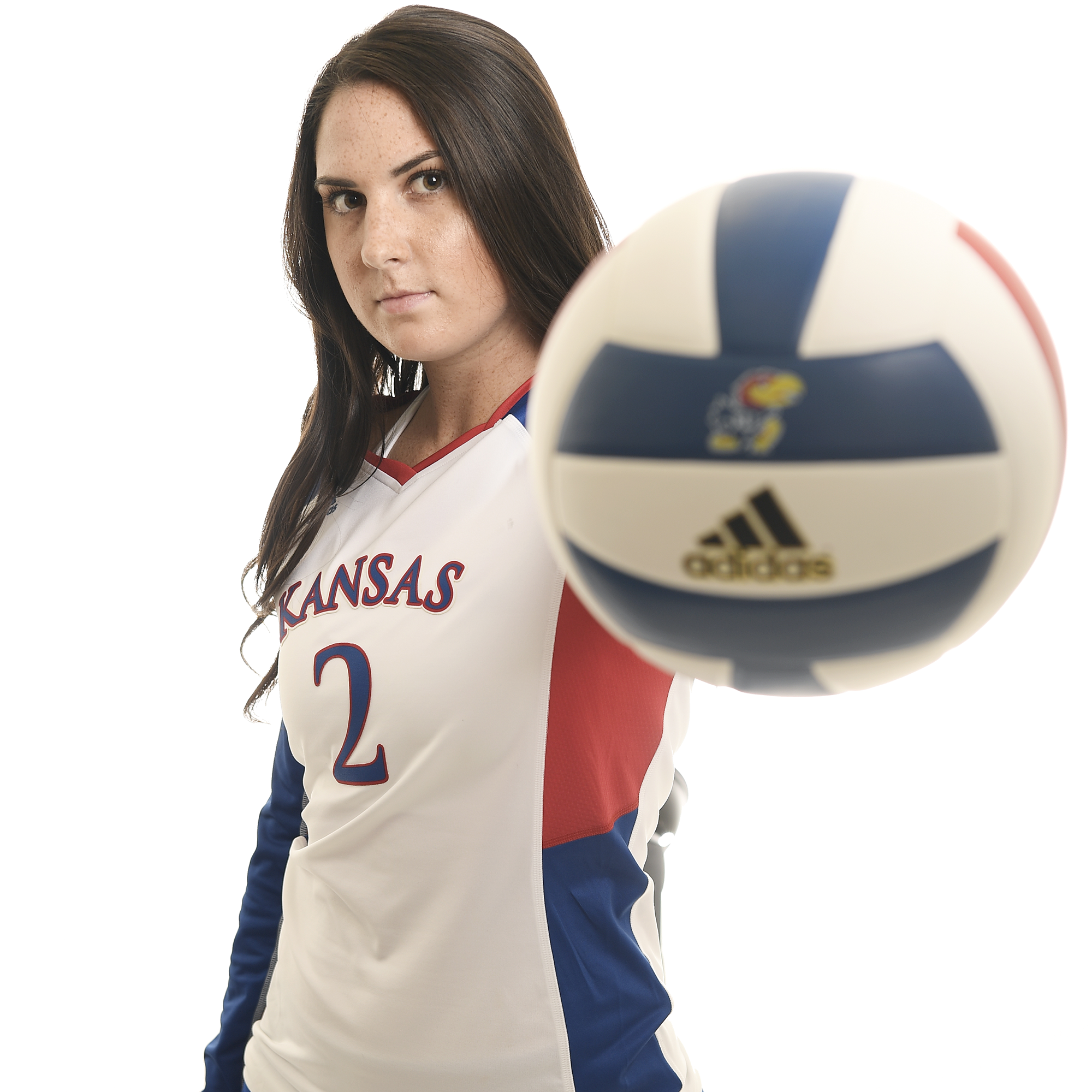 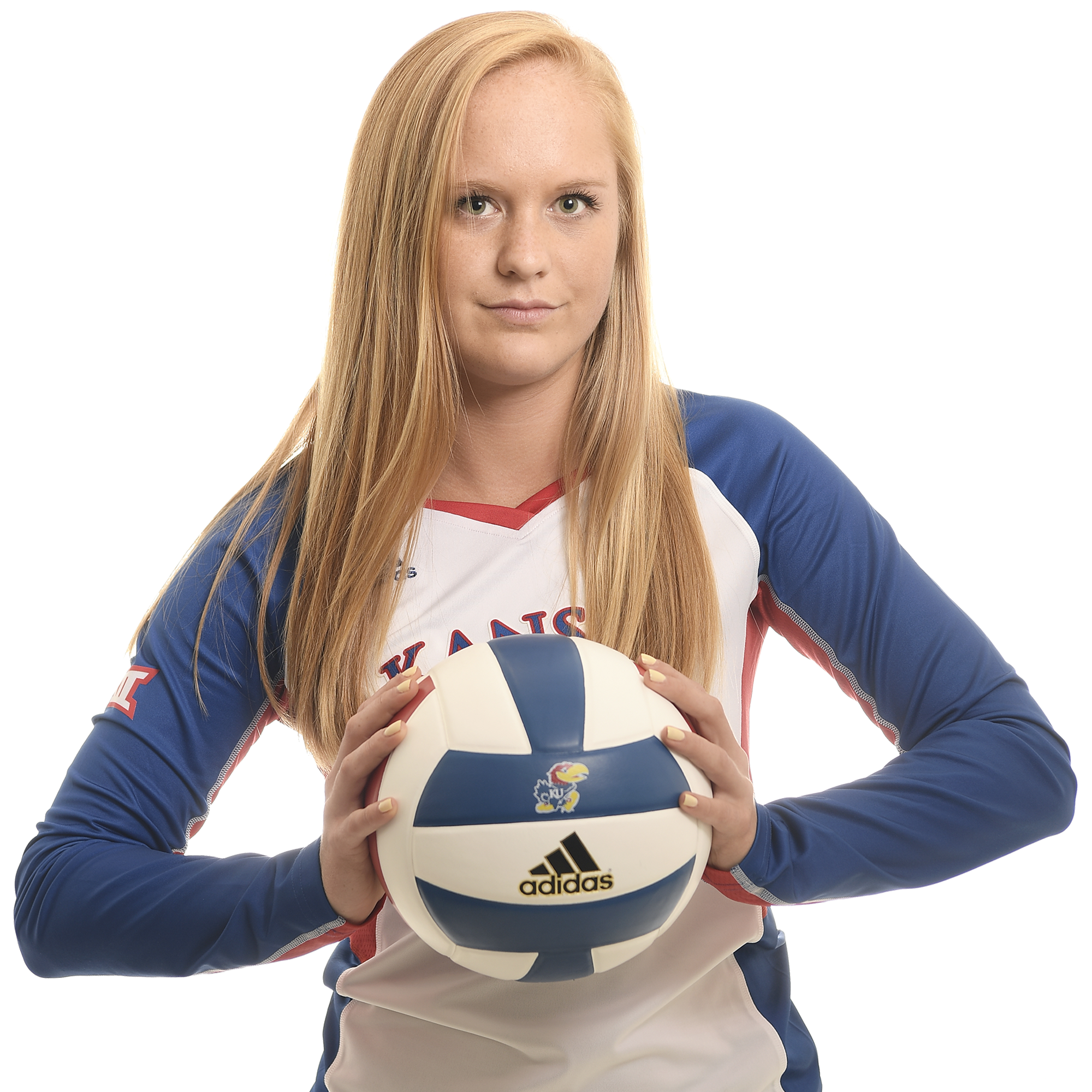 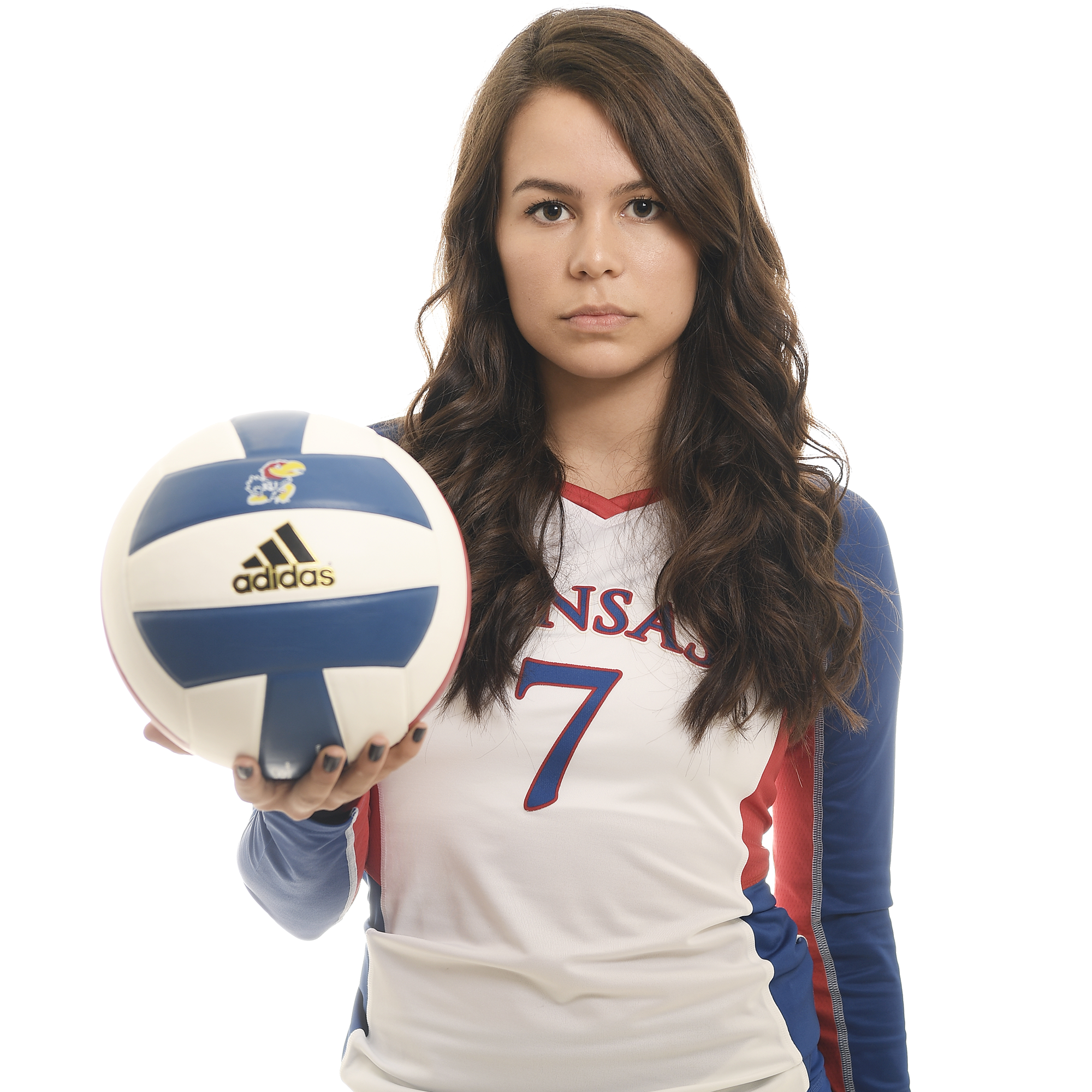 Nelson summed up their feelings best.

“Honestly, it’s whoever gets the job done. We have four really strong DS’s (defensive specialists). These are my best friends. If one of them plays, I’m going to support them,” Nelson said. “Whichever one of us does the job, that’s who’s going to do it.”

Each player has impressed Kansas volleyball head coach Ray Bechard with their performance thus far, but what will ultimately determine who earns the starting libero spot is beyond just athletic ability.

“Ultimately you can stat all you want — the first contact is the biggest thing. How well do they serve it? How well do they receive serves? What’s their range like when digging?” Bechard said. “But I think it is whoever is going to allow or create the best competitive atmosphere. Which one of these ladies is going to get her team to play a little bit harder — that’s the biggest question we are looking to answer in a libero. All four have had their moments during spring practice.”

One thing is clear among the four Jayhawks competing for the starting spot, it’s always “we before me.” Every player agreed that the needs of the team come first.

“It’s not as much of a competition, it’s more of getting us all collectively better because that’s what we need,” Nelson said.

Each player brings something unique to the team to fill the needs of the team, whether it’s communication, competiveness or skill.
“We have a great group of girls and all of us bring different talents every single day,” Miller said. “I just really think that all of us deserve the position and we’re just going to have to work our butts off every day so we can compete and fight for it.”

At the end of the day, each defensive specialist wants the same thing: to win. Whatever it takes and whoever will help the team to do that is who the players want for the job.

“As long as KU volleyball is successful, I’m on board for anything,” Barry said.

With winning as their top priority, the liberos have been working harder than ever to improve their game, with Wait serving as their role model and inspiration.

“Cassie’s honestly one of my biggest role models,” Nelson said. “She really took me under her wing when I got here.”

The opportunity to learn under one of the best liberos in the country is not something that Nelson took lightly.

“Just watching Cassie has affected my game,” she said. “I’ve definitely (been working on) using balls with my hands, being stopped and making one move.”

Nelson was used in a reserve role during KU’s 2016 campaign, but her energy could be spotted from the sidelines by anyone in Horejsi Family Athletics Center.

“I’m just a positive person. I’m a glass half full kind of girl. We all work very hard to bring the energy and always smile,” she said.

The Chicago native’s energy and positivity aren’t the only things that have impressed Bechard so far this season.

“Allie Nelson didn’t play a lot as a freshman, but once again, the jump from freshman to sophomore year – we’ve seen that in her,” he said.

As a freshman, Nelson averaged 1.33 digs and 0.25 aces per set in the seven matches and 12 sets that she appeared in, but looks to improve those numbers this season as she fights for the primary libero position.

Nelson had the opportunity to wear the off-color libero jersey for the first time in her collegiate career in an exhibition match against the UMKC Kangaroos on Saturday, August 19. While serving as the captain of the defense for three of the four sets against the ‘Roos, Nelson registered 11 digs.

“I feel more comfortable than I did last year,” Nelson said. “The team has been really good about having confidence in me. We have four great defensive specialists on this team and every day is a competition. They have pushed me to be a better player and I hope they can say the same about me.”

Bechard was pleased with the improvement and play of Nelson, and of all of the defensive specialists, in Saturday’s (August 19) tune-up match before the season.

“I thought Allie Nelson did a really nice job at libero when she was in there,” Bechard said. “All the defensive specialists got a shot and they did well. We held them to .063 (hitting percentage), so defensively this time of year we are a little bit ahead of where we are offensively. But overall, I’m pleased with what I saw.”

The exhibition match allowed for a first glimpse of each player’s improvement and what still needs to happen in order to earn the primary spot for the remainder of the season.

Each defensive specialist has taken something they’ve learned from Wait and applied it to their game in hopes of helping Kansas, whether it’s playing on the court or communicating off the court.

One thing that Miller took away from Wait was something she could apply in all aspects of her life.

Being surrounded by Wait’s strong communication skills showed the Derby, Kansas, native how important it was to effectively interact with her teammates and that she needed to strengthen that in her own style of play.

“She (Wait) definitely affected how I played,” Miller said. “The positive communication is one crucial factor that I definitely needed to add and she always brought it.”

Miller knew that improving her communication would benefit her in the long run during the competition for the primary libero spot.

“This year I’ve been really working on just having a bigger impact on the court. Coach B will say when we’re changing defenses or just in general we (the defensive specialists) need to calm down the team or bring up the energy, that’s our job,” Miller said. “I’ve been working a lot on communicating and speaking loudly and being positive.”

Mostrom agreed that communication is a key part of the libero position and she has been following Wait’s lead to step into that role.

“[Wait] definitely [taught me to] take ownership of the role, you wear the jersey so there is a lot of responsibility that comes along with that,” Mostrom said. “You have to communicate a lot when you are libero so just taking the initiative to step up to that role and perform.”

As a redshirt, Mostrom didn’t see any action in the 2016 campaign, but has been working tirelessly throughout the summer to become the best version of herself in order to possess KU’s primary libero role.

“It’s less of competing with the other liberos (for the starting role), it’s about always being the best version of yourself,” Mostrom said.  “We all learned that and we all compete with ourselves and encourage each other.”

Ultimately though, each player has one goal: do whatever it takes to win; and Mostrom wants to push her team to be the best that it can be.

“There will always be situations which will take a toll on some players or there’s going to be things that we don’t want to do. We’ve got to just push them to be their best whether they want to do it or whether they don’t,” she said. “No matter the situation, just always competing with themselves, competing with one another and encouraging them while doing it.”

Barry, like Mostrom, agreed that each player bettering their individual game is what will lead the Jayhawks to win. The top priority is finding the best fit that will allow the team to be successful on the court. 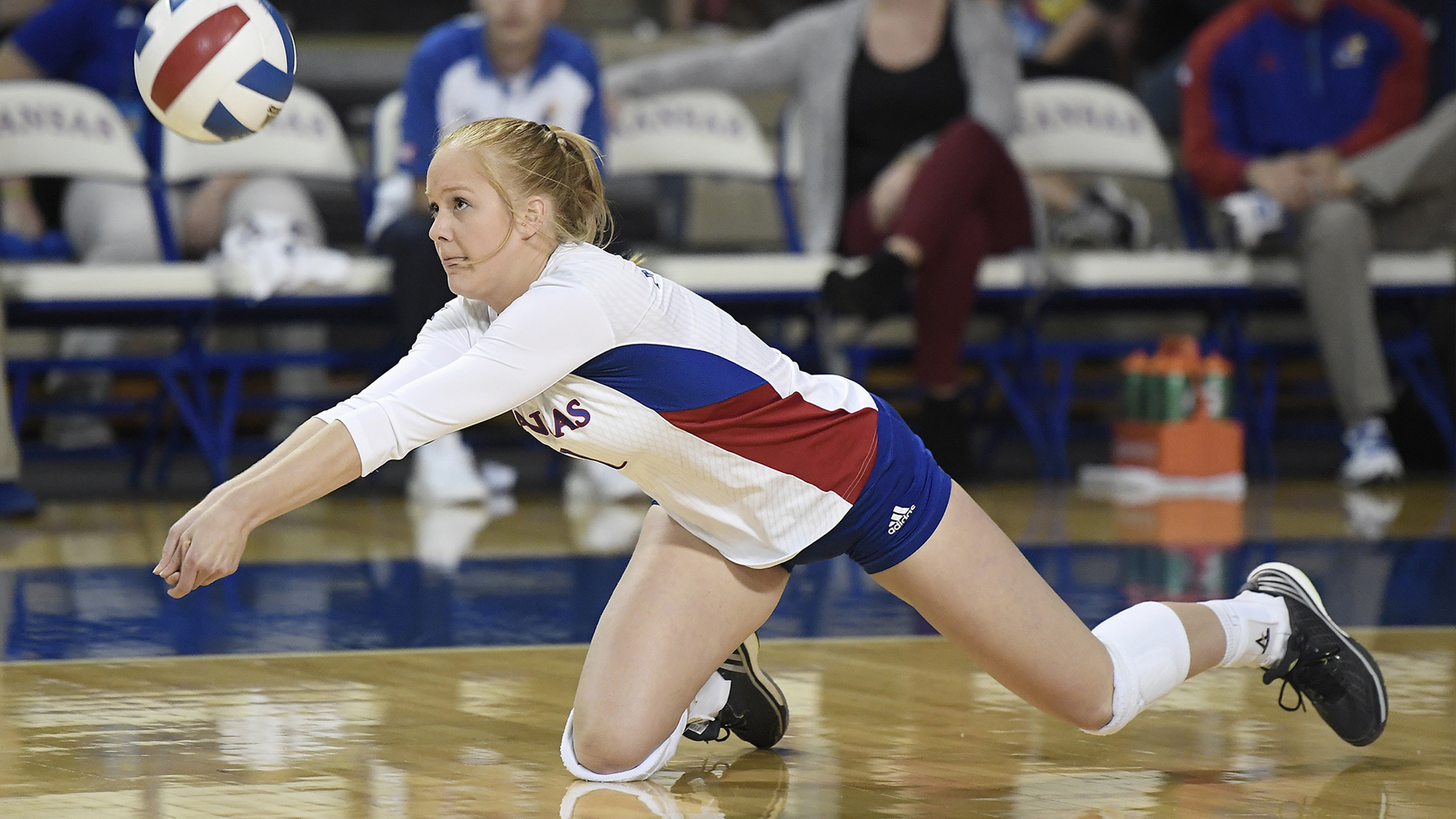 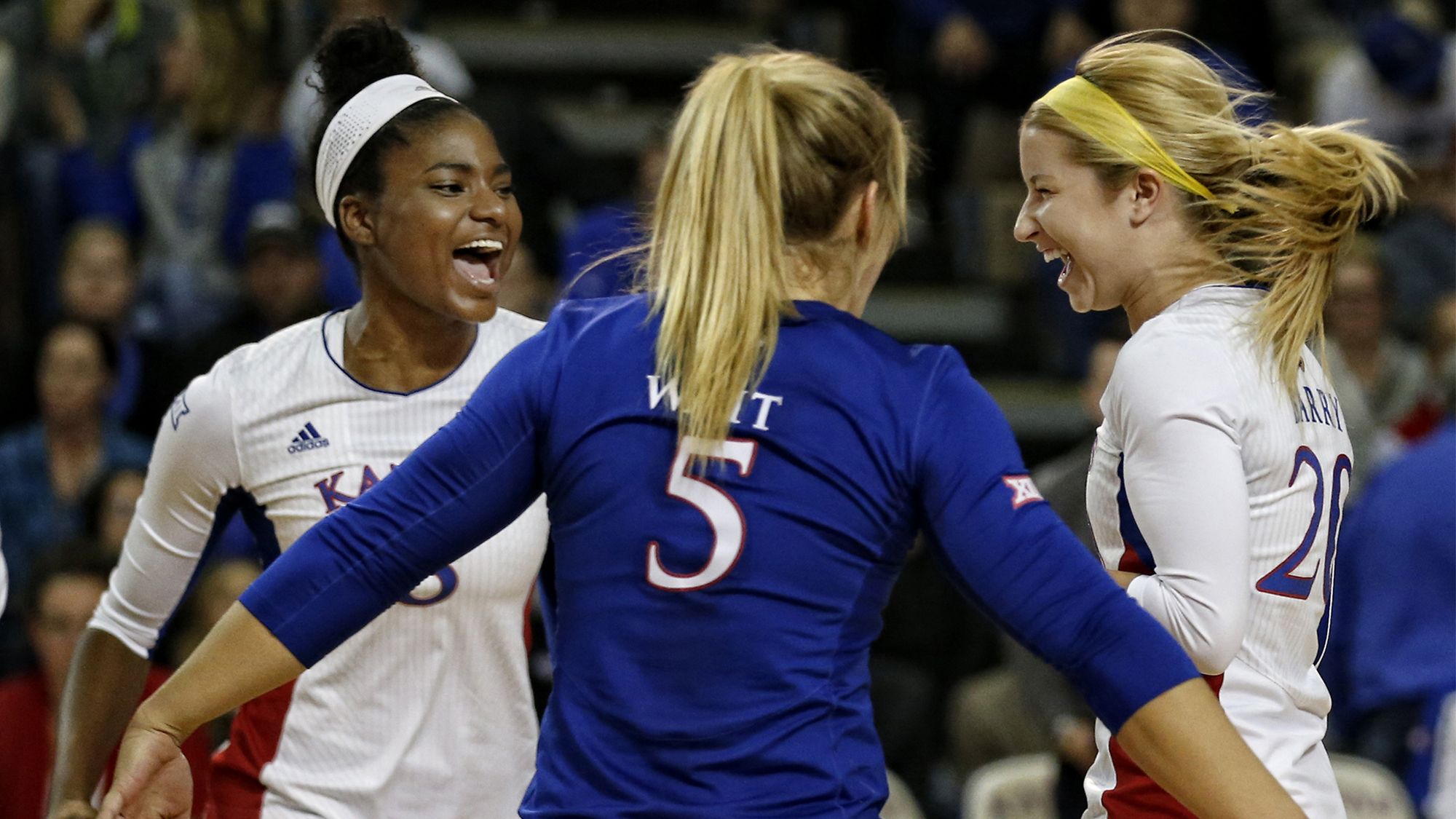 “It’s more of a direction of how can I better my game,” Barry said. “In the same way, if the decision to have one of them be the libero is the best for the team, I’m all for it.”

Throughout the process, Barry has been thinking back to some of the many things that Wait taught her and how she can implement those to help the team be successful.

“Cassie (Wait) really taught me about leaving the last ball behind and going for the next one,” Barry said. “I learned more about the game not technical wise, but more about the mindset of how to carry yourself throughout each and every set.”

That mindset revolved around active communication.

“I’ve been trying to be more vocal. Someone’s got to step up and really kind of run the show and Cassie (Wait) did such a phenomenal job of doing that,” Barry explained. “Just being able to be the communicator of the team and make sure everyone is on the same page. I think that’s one thing that I’ve really tried to emphasize from her play.”

While communication was a main focus for Barry and the three other defensive specialists, the Topeka native also challenged herself to get more touches to the ball.

“I’ve been doing my best to work on touches and even serve receive,” Barry said. “That’s the biggest part of the game too, first contact. Being able to really claim that role I think is huge for a passer.”

With each player’s improvement and commitment to the team, the future of the starting libero position is uncertain, however, one thing that is for sure: “we will always come before me” for the Jayhawks.