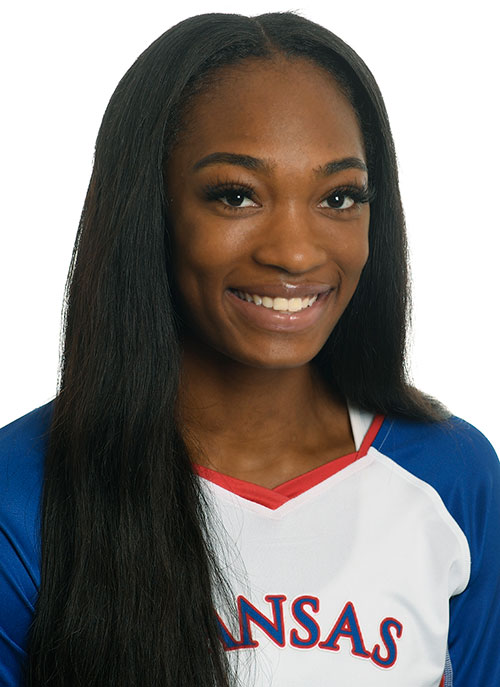 2017 (SOPHOMORE)
Earned All-Big 12 Second Team honors during her sophomore season … Played in 29 of KU’s 30 matches with 17 starts at outside hitter, helping Kansas earn its sixth-straight bid to the NCAA Tournament … Used as one of KU’s primary outside hitters all season, but did not start in select matches due to the rotation order … Averaged 2.48 kills per set overall and 2.41 kills per set during Big 12 play … Reached double-figure kills in 14 matches … Recorded a season-high 15 kills in KU’s season-opener at NC State (Aug. 25) … Posted a career-high six blocks in a four-set victory over Missouri State (Aug. 26) … Reached a season-high 15 kills for the second time in three matches during a five-set road victory over NC State (Aug. 26) … Added two block-assists for a total of 16.0 points against the Wolfpack … Named to the Wolverine Invitational All-Tournament Team after averaging 2.86 kills per set in the tourney hosted by Utah Valley … Recorded 14 kills on a .303 hitting percentage with two blocks in a four-set win over Long Beach State (Sept. 1) … Posted seven kills during KU’s sweep of No. 13 Kentucky (Sept. 4) … Recorded five kills on seven swings in just one set played during KU’s four-set win over No. 17 Purdue (Sept. 8) … Registered 11 kills in three sets against Creighton (Sept. 9) … Opened Big 12 play with 10 kills on a season-high .476 hitting percentage as Kansas defeated K-State (Sept. 24) in five sets … Posted 13 kills and a season-high five digs in five sets against No. 5 Texas (Oct. 11) … Helped lead Kansas to a three-set sweep over No. 24 Baylor (Oct. 18) in Waco with 11 kills and three blocks … First service attempt of her career came on match point against Texas Tech (Oct. 21) … Recorded 13 kills on a .357 hitting percentage in five sets against Oklahoma (Oct. 25) … Recorded 12 kills in four sets at Iowa State (Oct. 28) … Posted two blocks in three-straight matches against Kansas State (Nov. 8), No. 23 Baylor (Nov. 11) and at No. 2 Texas (Nov. 15) … Ended the season with 12 kills in the NCAA Tournament first-round match against Missouri (Dec. 1).

2016 (FRESHMAN)
Big 12 All-Freshman Team honoree after starting in 14 of 28 matches at outside hitter during her freshman campaign … Third on the team in kills per set (2.18) and fourth in total points (225.5) … Started in 12 of 16 Big 12 Conference matches, helping lead Kansas to its first-ever Big 12 regular-season title … The Jayhawks won the title outright with a 15-1 conference record … Recorded her first-career kill in the second set against Mississippi State (Aug. 26) at the Bulldog Invitational … Finished with two kills in two sets played during her collegiate debut … Reached double-figure kills for the first time in a match with 12 kills on a .375 hitting percentage in five sets against Xavier (Sept. 16) … Made her first-career start against Southeastern Louisiana (Sept. 17) — posted nine kills on a .316 hitting clip with two blocks against the Lions … In her Big 12 debut, recorded an efficient eight kills on a .333 hitting percentage with a season-high five blocks to help sweep Oklahoma (Sept. 21) … Poured in 13 kills in a five-set road victory at Kansas State (Nov. 2) … Finished the season with double-figure kills in six-straight matches, including a career-high 16 kills in back-to-back matches against Iowa State (Nov. 19) and Baylor (Nov. 26) … Opened the NCAA Tournament with 14 kills on a .344 hitting percentage in a three-set win over Samford (Dec. 1) in the first round … Ended the season with 12 kills in five sets against Creighton in the second round of the NCAA Tournament (Dec. 2).

ACADEMICS
Majoring in communication studies in the College of Liberal Arts & Sciences at the University of Kansas with a minor in African and African-American studies.