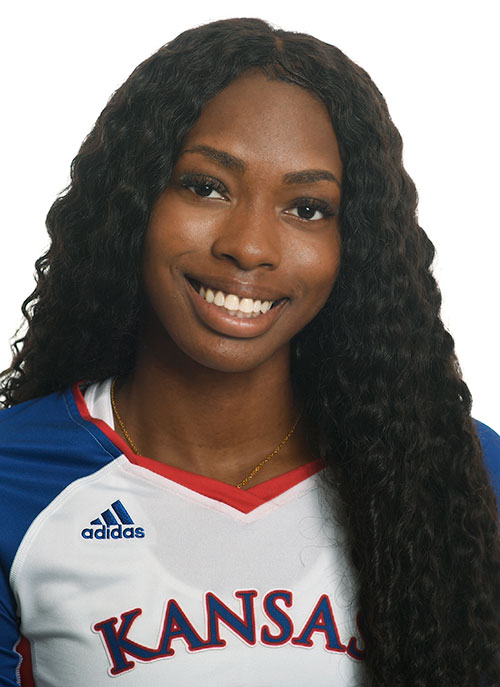 2017 (SOPHOMORE)
Played in 13 matches and 32 sets … All six of her starts came during Big 12 play … Totaled 43 kills on a .320 hitting percentage with 23.0 blocks … Averaged 1.34 kills per set and 0.72 blocks per set … Made her Kansas debut in a three-set win at Utah Valley (Aug. 31) … Recorded her first kill, dig and block as a Jayhawk against Montana (Sept. 2) … Posted six kills in two sets during her first match with substantial playing time at West Virginia (Oct. 4) … Made first start as a Jayhawk at Oklahoma (Oct. 7), recording 11 kills on 14 errorless swings with a season-high five blocks … Went for four kills and four blocks during KU’s three-set sweep at No. 24 Baylor (Oct. 18) … Recorded seven kills and two blocks in five sets against Oklahoma (Oct. 25) … Her final start of the season was at No. 22 Iowa State (Oct. 28).

2016 (FRESHMAN AT ARIZONA STATE)
Played in 65 total sets for the Sun Devils during the 2016 campaign … Totaled 54 kills on a .152 hitting percentage with 45 blocks … Made first-collegiate start in the first match of the season against Fairfield (Aug. 26) and went on to record her first-career block, finishing with two … Recorded a season-high six blocks in a five-set win over Butler (Sept. 2) during the Iowa Hawkeye Classic … Notched a season-high nine kills against Long Beach State (Sept. 10) on a .750 clip with no attacking errors; added five blocks in ASU’s five-set victory over LBSU.

ACADEMICS
Pursuing a degree in the College of Liberal Arts & Sciences at the University of Kansas.

PERSONAL
Full name is Mmachi Edith Nwoke … Daughter of Kenn and Nneka Nwoke … Has one brother, Chimez, and two sisters, Iveoma and Uchenna.