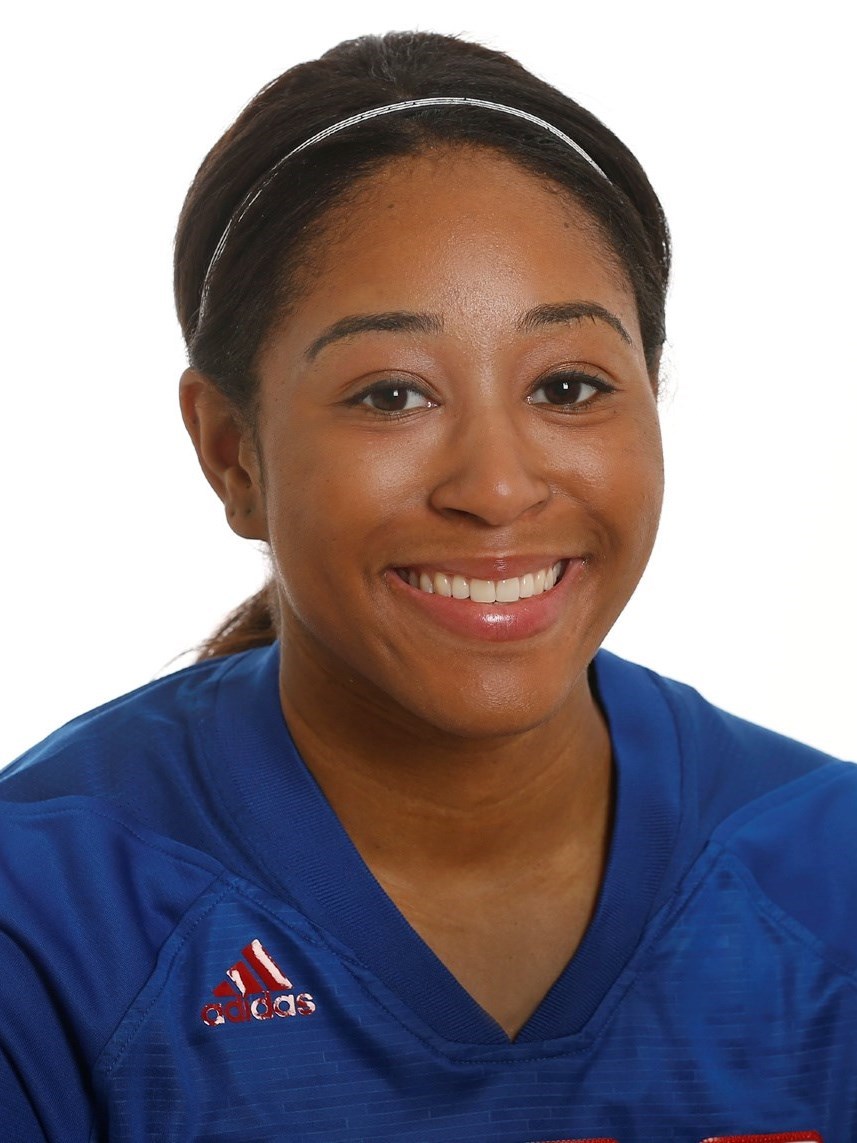 2013-14 (Junior)
All-Big 12 Honorable Mention… Voted team co-captain… Started all 32 games for the Jayhawks after recovering from an ACL injury during the 2012-13 season… Averaged 35.3 minutes, 10.6 points, 3.5 rebounds, 3.0 assists and 1.3 steals per game… Scored in double figures 20 times for Kansas… Made 63 three pointers, which is the fourth-highest total in program history… Shot 40.9 percent from beyond the three-point arc during the season, including 15 times over 50 percent, which is the seventh-highest percentage by a Jayhawk for a single season and the highest percentage in the Big 12… Made a team-high 80.4 percent of her free throw attempts… Played a total of 1,130 minutes on the year, which is the eighth-highest total for a single season in program history… Totaled the third highest assists-to-turnover ratio in the Big 12 and 26th in the country at 2.3… Finished the season second on the team in assists (96) and steals (40)… Set career highs in points (25), field goals (nine) and three-point field goals (six) against Oklahoma (2/9)… Also knocked in six three-point field goals at TCU (1/8)… Grabbed a career-high eight rebounds at Kansas State (1/25)… Dished out a career-best eight assists and recorded a season-high five steals against Yale (12/29)… Played a season-most 45 minutes against Kansas State (3/7) in the first round of the Big 12 Championship.

2011-12 (Freshman)
Only freshman to start all 34 contests … Only had 41 turnovers, the fewest among KU starters … Improved her range as the season wore on and collected 15 of her 29 three-pointers in the final nine games of the season … Led the team with a 38.7 three-point field goal percentage … Ranked third among Big 12 freshmen with a 38.7 three-point field goal percentage, 2.03 assists per game and 1.26 steals per game … Recorded 12 contests with three or more dimes … Went 5-for-6 from the free throw line and added a field goal for eight points while pulling down six rebounds in her season debut against Western Michigan (11/13/11) … Scored nine points and dished five assists in 16 minutes against Lamar (11/25/11) … Sank five of her six attempts from the floor, including both trey tries, on her way to her first double-digit outing with 12 points against Sam Houston State (12/28/11) … Also dished a personal-high six assists against the Bearkats … Played 45 minutes in a double-overtime win against Iowa State (1/11/12) pulling down a season-best seven rebounds and adding 10 points, two steals and two assists … Went 2-for-3 from beyond the arc and 4-for-5 from the field on her way to 12 points during a road win at Texas Tech (2/21/12) while also adding five boards and a pair of dimes … Had arguably the best game of her season in KU’s regular-season finale win at Oklahoma (3/4/12) turning in a personal-high 18 points with the help of a 7-for-8 performance at the free throw line in the final two minutes of the contest to help seal the victory … Named Big 12 Freshman of the Week on March 5 for her performance at OU… Contributed seven rebounds and three assists against the Sooners … Followed that game with 14 points on 4-of-6 shooting from long range and another outing with seven rebounds against Texas A&M (3/8/12) in the Big 12 Championship … Played all 40 minutes in the win against Delaware (3/20/12) during the NCAA Tournament Second Round and collected eight points, five assists and two steals … Hit two three-pointers versus the Blue Hens completing a five-game streak with at least one trey and totaling 11 three-pointers in that span.

High School
A 2011 graduate of Olathe South High School in Olathe, Kan. … Gatorade’s Kansas High School Girl Player of the Year in 2011 after being the runner-up her junior season … Also named all-state first team, Sunflower League Player of the Year and Kansas Basketball Coaches Association (KBCA) Miss Kansas Basketball as a senior … Led the Falcons to their seventh-consecutive state tournament appearance and Sunflower League Championship in 2010-11 while the team went 21-2 for the third-best record in school history … Selected to play in both the Greater Kansas City Basketball Coaches Association (GKCBCA) and KBCA All-Star Games in 2011 … A McDonald’s All-America nominee … 2011 DiRenna Award winner for the second consecutive year as the top player in the Kansas City metro area … Helped her team to a 24-1 record and the Class 6A state championship in 2010 averaging 17.0 points, 5.0 rebounds, 4.0 assists and 4.0 steals per game … Earned all-tournament MVP honors … Also selected ESPN Rise Underclass All-America, all-metro player of the year and all-state first team by the Wichita Eagle and Topeka Capital Journal her junior season … Named an all-state honoree by several media outlets as a sophomore and a member of the All-Sunflower League First Team as OSHS finished second in the state tournament … Lettered four years in basketball for coach Steve Ingram.

Personal
Daughter of James and Tinita Knight, both KU alumni … Born in Overland Park, Kansas… Has a younger brother, Noah … Father played basketball at San Diego … Uncles Mark, Kelly and Danny Knight all played basketball at KU … Danny Knight was a team captain in 1974 and was named to the NCAA All-Tournament Team during the Jayhawks’ Final Four season … A communications studies major.