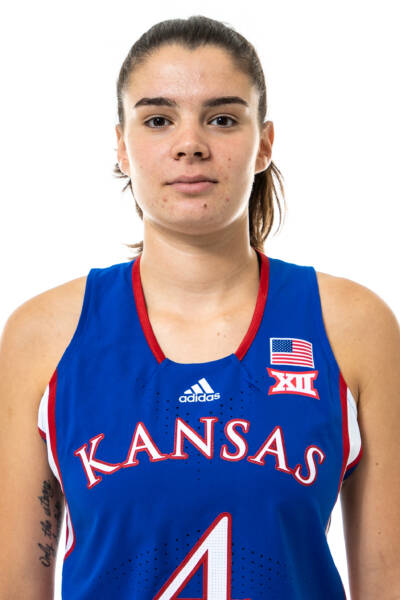 2021-22 (Sophomore)
Named to the Academic All-Big 12 Second Team…Made 16 appearances for the Jayhawks, averaging 8.5 minutes per game off the bench…Shot 46.2 percent from the field and 47.7 percent from three-point range, hitting 21-of-44 threes for the season…Averaged 4.4 points per game…Scored in double figures twice, with a season-high 14 points against UTEP (Nov. 27) at the South Point Shootout…Totaled four rebounds, three steals and three assists.

2020-21 (Freshman)
2020-21 Academic All-Big 12 Rookie Team…Tied the school record for three-pointers made in a game (eight) and attempts (14) versus Kansas State (Feb 13)…Concluded her freshman season playing a total of 222 minutes through 21 games…Shot 35.4 percent from the field, 37.7 percent from deep and 75 percent from the free throw line…Scored a total of 100 points…Recorded 26 rebounds.

Prior to Kansas
A Bluestar Europe four-star recruit…Competed on the first division Croatian professional league team, Zkk Sibenik…Was a member of Croatia’s national team…A top scorer in the 2019 FIBA division A, the top level of the under-20 championship organized by FIBA Europe.

Back home in Sibenik, before I left the playground, I'd always throw up one last shot and watch it go through the hoop. The entire time, I'd be saying to myself, "I need to make it to college. I have to make it."