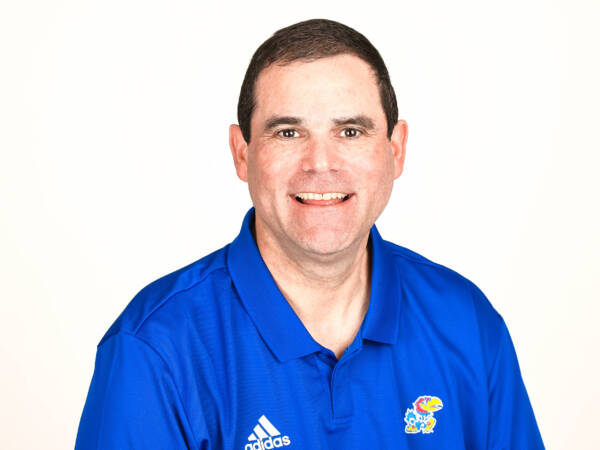 Rob Ianello rejoined the Kansas Football program as the General Manager in May of 2021, bringing more than 30 years of college coaching experience with him to Lawrence.

Ianello spent the previous six seasons at Buffalo with head coach Lance Leipold. Ianello served as the wide receivers coach during his time with the Bulls. Under his guidance, the Bulls produced All-MAC receivers in each of his last four seasons as receivers coach. Last season, Antonio Nunn was named All-MAC for the second straight season. He tied the school record with 13 catches for 182 yards against Ball State in the 2020 MAC Championship Game.

Nunn earned third-team all-conference honors the year before with 49 catches for 687 yards and six touchdowns. In 2018, Buffalo had two receivers named to the All-MAC team in the same season as Anthony Johnson and K.J. Osborn were named to the third-team. Johnson became the third player in school history with two 1,000-yard receiving seasons in a career. He also had 25 touchdown catches in his career, good for third in school history.

In his first season with the program in 2015, the Buffalo receivers thrived under Ianello’s tutelage. For the first time as an FBS program, Buffalo had three players with 50 or more catches in a season.

Prior to his time at Buffalo, Ianello spent three seasons here in Lawrence, where he served as the recruiting coordinator and wide receivers coach for the Jayhawks.

Ianello came to Kansas the first time from Akron, where he was the head coach in 2010 and 2011. He served as a member of the Notre Dame coaching staff from 2005 to 2009, coaching the Irish in the 2008 Hawai’I Bowl, 2007 Sugar Bowl and 2006 Fiesta Bowl. He served as the wide receivers coach and recruiting coordinator for the Irish, before being promoted to assistant head coach for offense. HE later served as the team’s interim head coach.

As the recruiting director at Notre Dame, he helped land three straight top-10 recruiting classes from 2006 to 2006. He was also named one of the top 25 recruiters nationally by Rivals.com during his time at Notre Dame.

Prior to Notre Dame, Ianello was in his second stint at Wisconsin, here he was a part of a staff that went to 2003 Music City Bowl and the 2005 Outback Bowl.

Ianello is a native of Port Chester, N.Y., and a 1987 graduate of the Catholic University of America in Washington D.C., with a degree in English.

He and his wife, the former Denise Dove, have one son, Zachary, and two daughters Ashley and Courtney. Denise played collegiate basketball at Northern Illinois and is a former assistant women’s basketball coach at Arizona and Wisconsin. She also worked as a scout in the WNBA.