In a  hard-fought match between the two schools, each netted a victory in the first two sets with Kansas winning the second set. After UNLV earned the first set, Kansas respond and captured the set after seniors Ashley Smith and Zoe Hill pushed Kansas to 25 points after the Jayhawks and Rebels were tied at 23-all.

The final set against UNLV was shuttered by the Rebel attack that managed to expand its lead to five-points early in the set. Kansas fought back and mustered a strong attack against UNLV, but was unable to overcome the deficit and dropped the set and match.

Kansas finished with three players with double-figure kills and were led by Smith who finished with 14. Rachel Langs logged 12 kills on the day, while Hill claimed 11. Allie Nelson finished with a team-best 19 digs and Sara Nielsen topped 40 assists for the second time this season with 41.

S4 | A Hill 𝐊𝐢𝐥𝐥 gives the Jayhawks double digits in the set.

S3 | Jayhawks back within two after a kill by Carrier.

S3 | Smith with a 𝒌𝒊𝒍𝒍 to give #KUvball the edge!

S2 | Nelson with an 𝓐𝓒𝓔. #KUvball holds the advantage heading into the UNLV timeout.

S1 | #KUvball rallying against the Rebel attack! Jayhawks are within one point of UNLV.

S1 | #KUvball reaches double figures after a 𝐁𝐋𝐎𝐂𝐊 by Hill and Carrier. 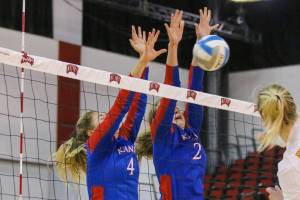 In the first game of the Rebel Challenge against Arizona State, sophomore Rachel Langs led the team with six blocks. 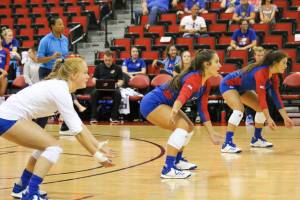 Allie Nelson continues her climb through the Kansas record book. The senior from Chicago, Illinois has 1,039 career digs after collecting 10 against ASU as she looks to reach 1,100 for her career.