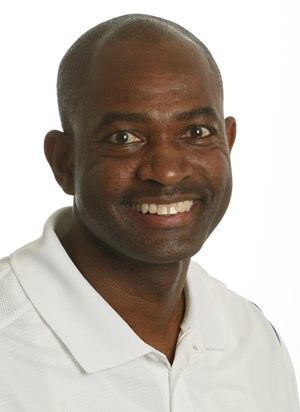 Stanley Redwine is in his 22nd season at the helm of the Kansas track & field and cross country programs during the 2021-22 seasons, making Redwine the second-longest tenured head coach in the program’s history, behind only Bob Timmons who coached the Jayhawk programs for 23 years.

Already a member of the Kansas Athletics Hall of Fame, Redwine is one of the most well-respected coaches in the United States. A former All-American himself at the University of Arkansas, Redwine is a five-time Big 12 Coach of the Year, and has coached 20 individual champions, 230 All-Americans, 12 Olympians while at KU and 23 national championship teams between his years as head coach at Kansas and Tulsa and an assistant coach at Arkansas.

Redwine’s national championship came for the Jayhawk women’s outdoor team in 2013, making it the first women’s team title in KU history. For his coaching efforts that season, Redwine was named the NCAA’s Women’s Head Coach of the Year.

Redwine’s last decade at Kansas have perhaps been the most successful stretch in his career, with the women’s team NCAA title coming in 2013 and having seven individual national champions. He also led the men’s team to its highest conference finish in over 30 years in 2016, claiming second at the Big 12 Outdoor Championship before following it up with runner-up finishes at both the indoor and outdoor conference meets for the men’s team in 2017 and an 11th-place finish at the 2017 NCAA Outdoor Championships, the highest finish by the Jayhawk men since taking seventh in 2010.

During the 2018-19 season, Redwine guided the Kansas men to top-15 NCAA finishes both indoors and outdoors, of which the Jayhawk men added seven All-American honors. During the same season, Bryce Hoppel completed a perfect season between the indoor and outdoor seasons, winning 19 consecutive races including NCAA Indoor and Outdoor titles in the 800 meters. Hoppel’s performance at the NCAA Outdoor Championships of 1:44.41 was the fifth-fastest 800 meter time by a collegian ever.

The 2017-18 year proved to be a highly successful one for the head coach in his 18th season with school records being broken 16 times. Redwine coached Sharon Lokedi to her second-straight Big 12 Women’s Cross Country individual title, the Kansas women’s indoor team to a second-place finish at the Big 12 Championship (earning him Big 12 Women’s Indoor Coach of the Year honors), Hussain Al Hizam to a national title in the pole vault NCAA Men’s Indoor National Championships and Lokedi to a national championship in the 10,000-meter run at the NCAA Outdoor Championships. His athletes also won 11 individual Big 12 titles and 34 All-America honors during the 2018 track & field seasons. At the NCAA Indoor Championships, the men’s and women’s teams both posted top-20 finishes for the first time in program history.

Adding to his accolades, Redwine has coached athletes at each of the last two Olympic Games, with Bryce Hoppel (800 meters), Alexandra Emilianov (discus), Mason Finley (discus), Christina Clemons (100-meter hurdles) and Gleb Dudarev (hammer throw) competing at the 2020 Olympic Games in Tokyo. Four of Redwine’s athletes competed in the Games of the XXXI (31st) Olympiad in the summer of 2016. Kyle Clemons was a member of the USA’s gold-medal winning 4×400-meter relay team, Andrea Geubelle placed 21st in the triple jump while representing the United States, Mason Finley took 11th for the USA in the discus and Daina Levy placed 30th in the hammer throw, representing her home country of Jamaica.

The 2013 season marked a historic year for the women’s program. In addition to the NCAA Outdoor title, the Jayhawks claimed both the indoor and outdoor conference titles and Redwine saw his athletes earn first team All-America honors 27 times during the indoor and outdoor campaigns. Lindsay Vollmer became Kansas’ first female NCAA Champion with her win in the heptathlon while Andrea Geubelle and Natalia Bartnovskaya both tallied national titles at the NCAA Indoor meet.

Redwine pupil Diamond Dixon not only claimed a national championship, four conference titles and four more All-American honors in 2012, but also won a gold medal at the Olympics in London as part of the 4×400-meter relay team.

Behind NCAA Champion Jordan Scott’s performance at the 2010 NCAA Outdoor Championships, the KU men’s team finished seventh at the national meet, which was the highest finish for the Kansas men at the outdoor championships since taking fifth in 1975. Scott claimed the pole vault title for the first time in his career, while freshman thrower Mason Finley took home second place in both the shot put and discus at the NCAA Outdoor meet.

In 2008, Redwine coached 12 track & field All-Americans, which was then the most he had coached in one season in his time at Kansas.

In the summer of 2008 in Beijing, China, Redwine athletes Scott Russell and Nickesha Anderson represented their respective countries in the Games of the XXIX (29th) Olympiad. Russell finished in 10th place for Canada in the men’s javelin, while Anderson was an alternate on Jamaica’s women’s 4×100-meter relay team.

In the 2008 indoor track & field season, Kansas was just one of 10 schools to have both its men’s and women’s teams finish in the top 25 at the NCAA Championships. At the NCAA Outdoor Championships, senior Crystal Manning (long jump and triple jump) and junior Nickesha Anderson (100 meters and 200 meters) each won two All-America honors. Only one other woman (Candace Mason) had previously accomplished the feat in KU history.

As an athlete, Redwine placed his name in the Arkansas history books as a 400-meter, 600-yard and 800-meter runner from 1980-83. Redwine was a four-time All-American and was named Arkansas’ Outstanding Track Athlete all four of his years in Fayetteville. Redwine went on to spend nine years as an assistant coach at his alma mater.

During his tenure, the Razorbacks captured nine consecutive NCAA Championships and 22 titles from 1985 to 1994 in both track & field and cross country. He helped produce 14 All-Americans and two NCAA Champions in the hurdle and sprint events. Among those All-Americans were two-time 400-meter NCAA indoor and outdoor champion Calvin Davis, three-time 400-meter and 500-meter NCAA champion Robbie Haley and seven-time All-American sprinter Jimmy French.

His success as an assistant earned him the head coaching position at the University of Tulsa in 1994. In six years at Tulsa, Redwine’s athletes broke more than 70 school records, most on multiple occasions. He produced 11 NCAA qualifiers and Tulsa’s first-ever All-American.

On May 25, 2000, Redwine was rewarded for his efforts by being hired as the head coach at the University of Kansas. The Jayhawks’ track & field program has prospered ever since, as he has restored the tradition of KU’s illustrious past.

Redwine earned his bachelor’s degree in administrative management from the University of Arkansas in 1985. He and his wife, Jacqueline, have three children; Crysta, Stanley Jr., and Alexa.