“We’re really excited. Everyone came into this week with the idea that this was something that we could do. It’s really hard to single one person out though because it was a total team effort but I’m just thankful that everyone did so well. This is just another great step for Kansas.”

The women’s 4×100-meter relay got the Jayhawks started strong in the first race of the final day. The quartet of Paris Daniels, Tianna Valentine, Denesha Morris and Diamond Dixon posted the fifth-fastest qualifying time in Wednesday’s semifinal and returned to Hayward Field Saturday trying for a similar result in the final.

After a troublesome hand off in the semifinal race, the Jayhawks passed the baton around in near-flawless fashion with the anchor, Dixon, crossing the finish in 44.92 to take fifth in the event. KU’s placement earned the Jayhawks its first four points of the day and moved the squad ever closer to the team title.

Daniels then returned to the track looking to earn first team All-America honors in the 200 meters for the second-straight year. The St. Louis native got out of the starting blocks well, but found herself near sixth as she made her way into the straight away. Daniels made up two spots down the final 50 meters to snag the fourth-place finish in a wind-aided time of 22.52. Her finish not only garnered her team five more points, but clinched Kansas’ victory in the team championship.

An hour later, the Jayhawks put the finishing touches on the team title when the 4×400-meter relay team tacked on Kansas’ final three points of the meet. For the third time in a two-hour span, Daniels made her way onto the track as the relay team’s anchor leg. She was joined by Morris, Dixon and Taylor Washington, each of whom boast multiple first team All-America honors in the event. The squad completed all four legs in 3:32.74, finishing sixth in the event and notching the highest finish ever for a Jayhawk 4×400-meter relay at the NCAA Championships.

The KU women finished the meet with 60 points, 16 points ahead of second-place Texas A&M.

In all, 11 of the Jayhawks 13 entries in the meet contributed to the team’s scoring effort, with senior Andrea Geubelle leading the way with her 16 points in runner-up performances in both the long jump and triple jump. The Jayhawks saw 11 athletes earn first team All-America honors as well as both relay teams, with an additional two claiming second team honors. The Jayhawks also saw the program’s first individual outdoor champion as Lindsay Vollmer took gold in the heptathlon earlier in the meet, on Friday.

The 2013 National Championship capped off a strong season for the Jayhawks overall, after winning the 2013 Big 12 Indoor and Outdoor Championships. 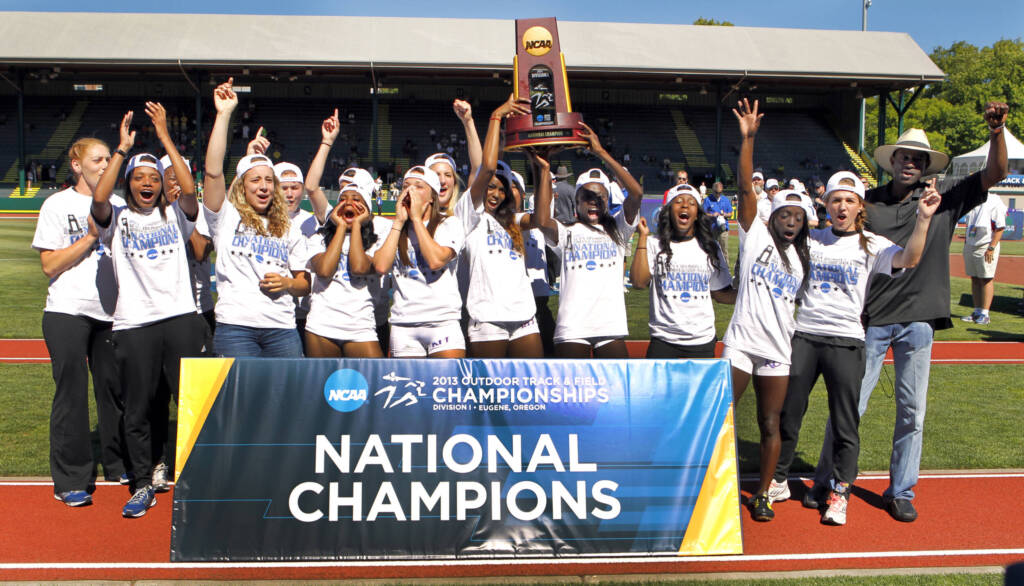 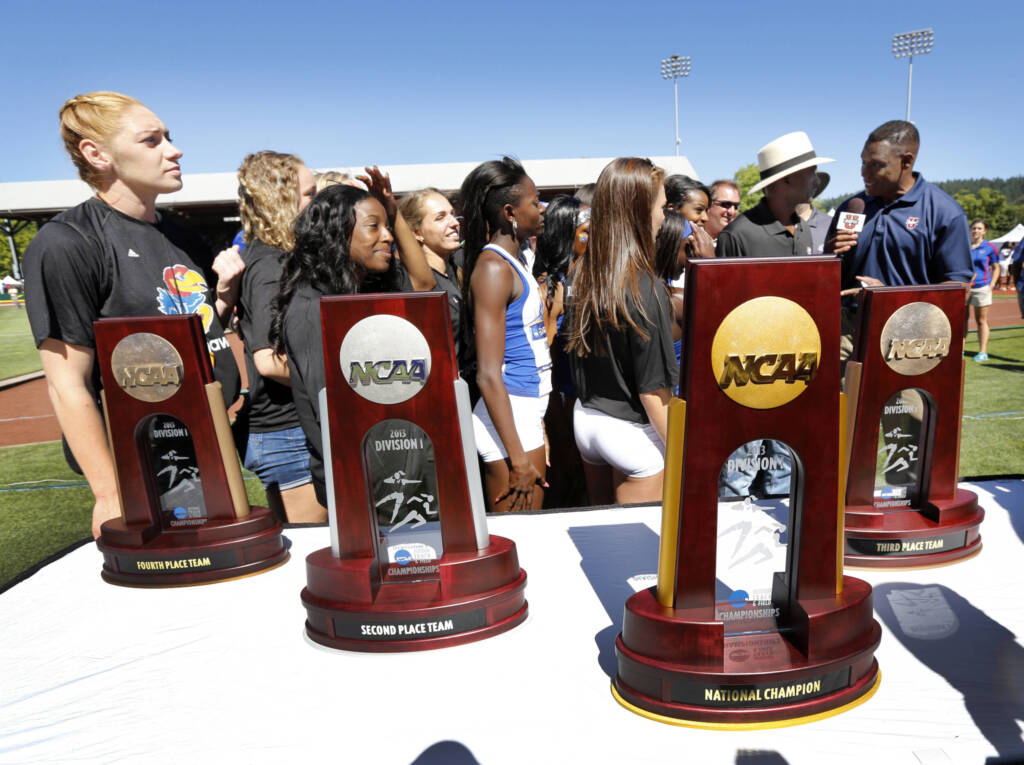 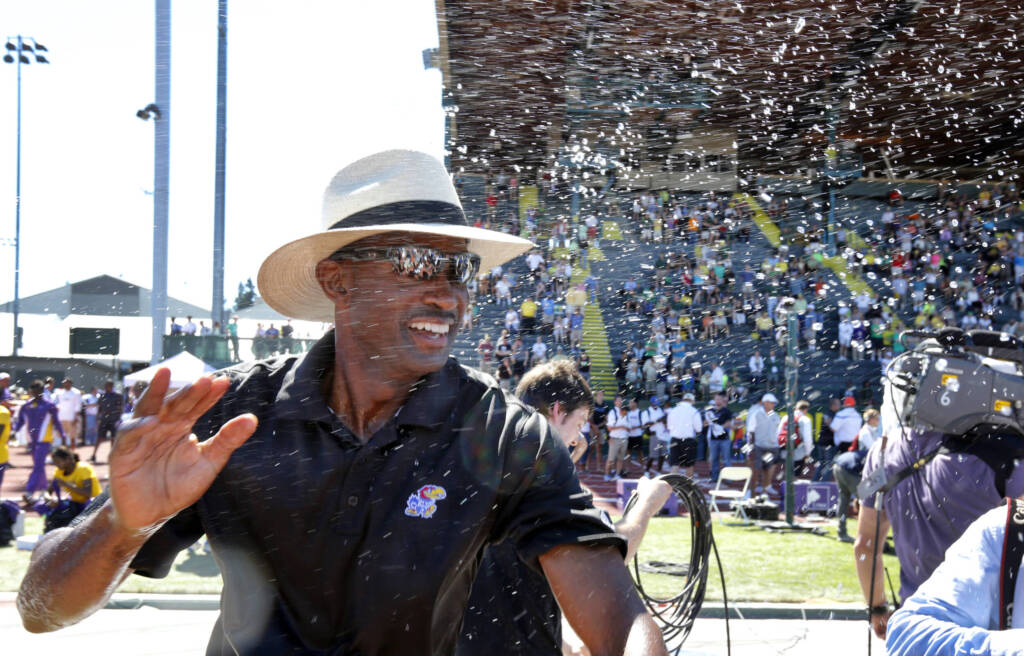 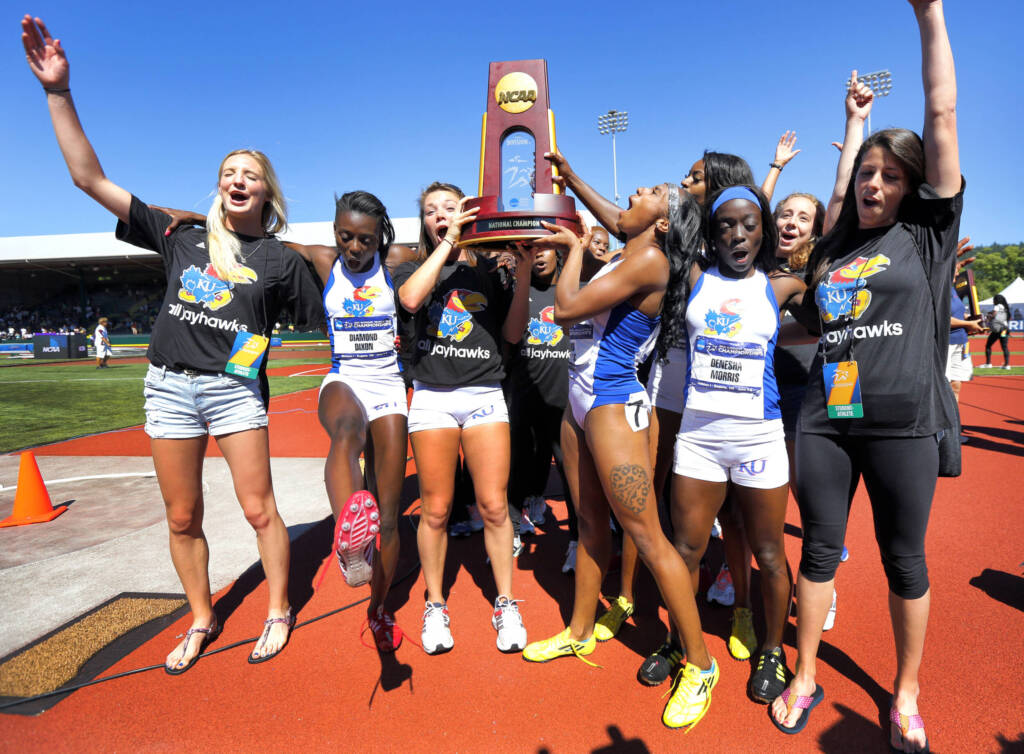 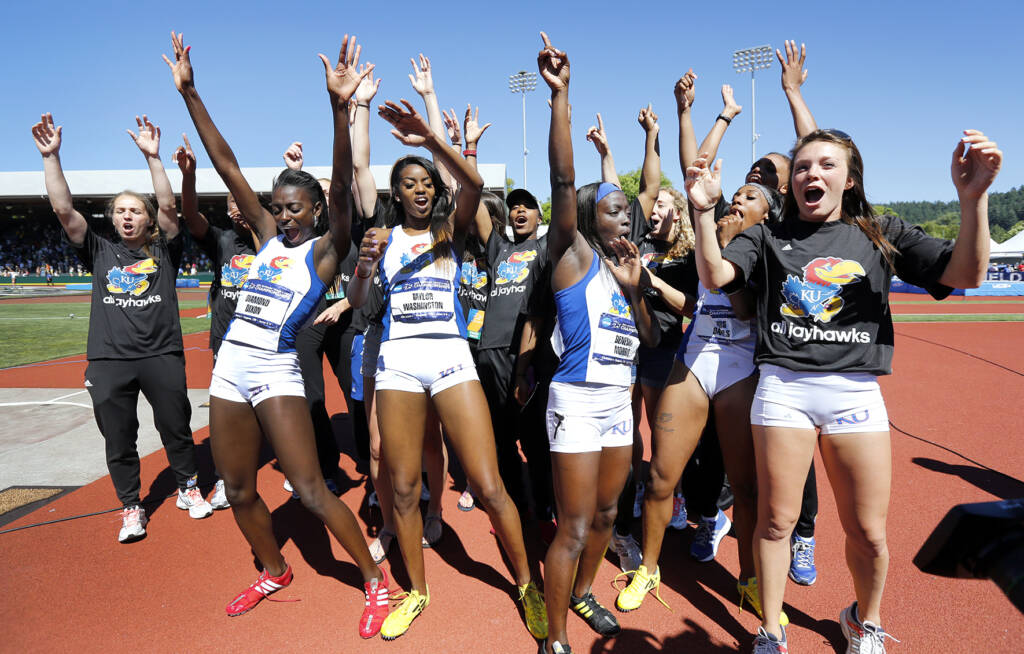 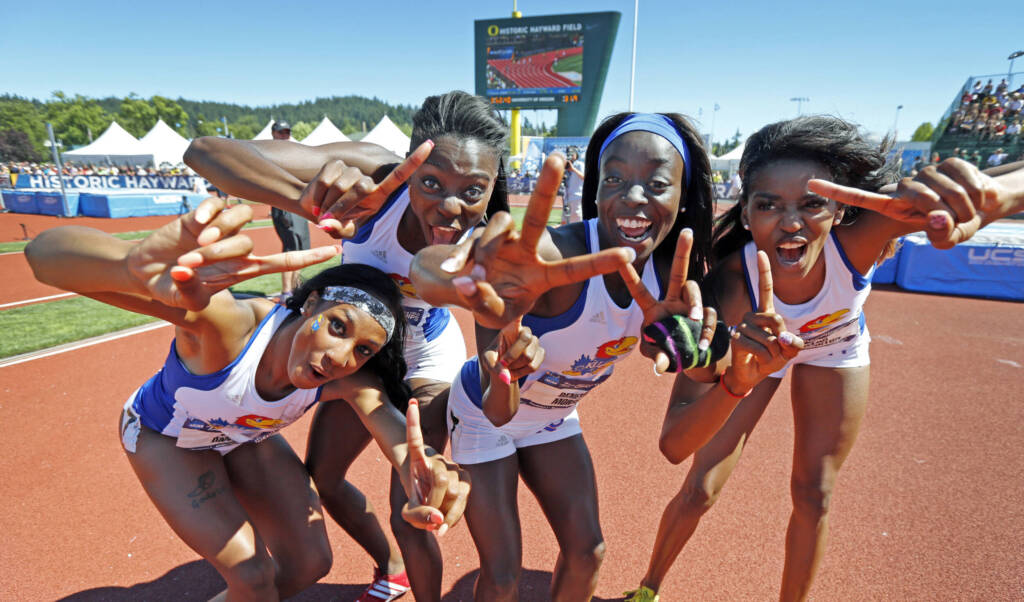 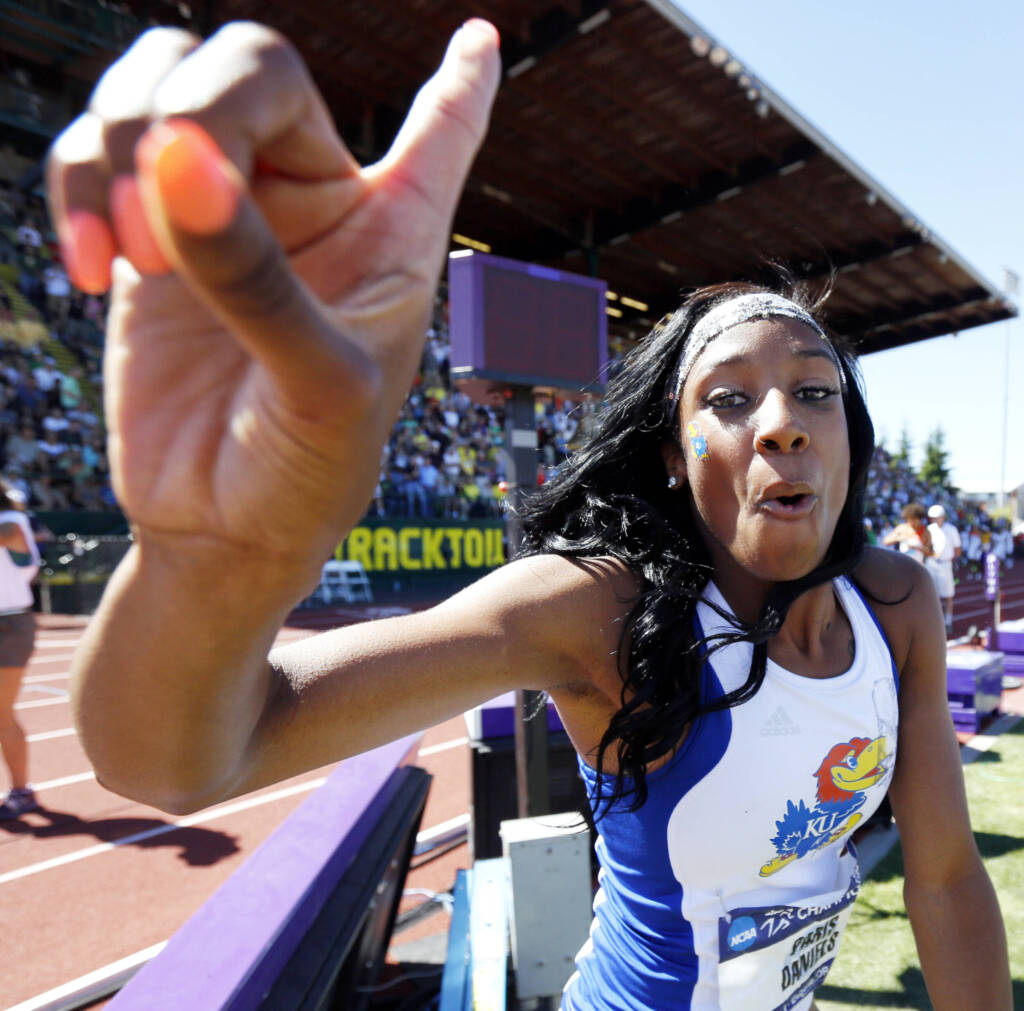 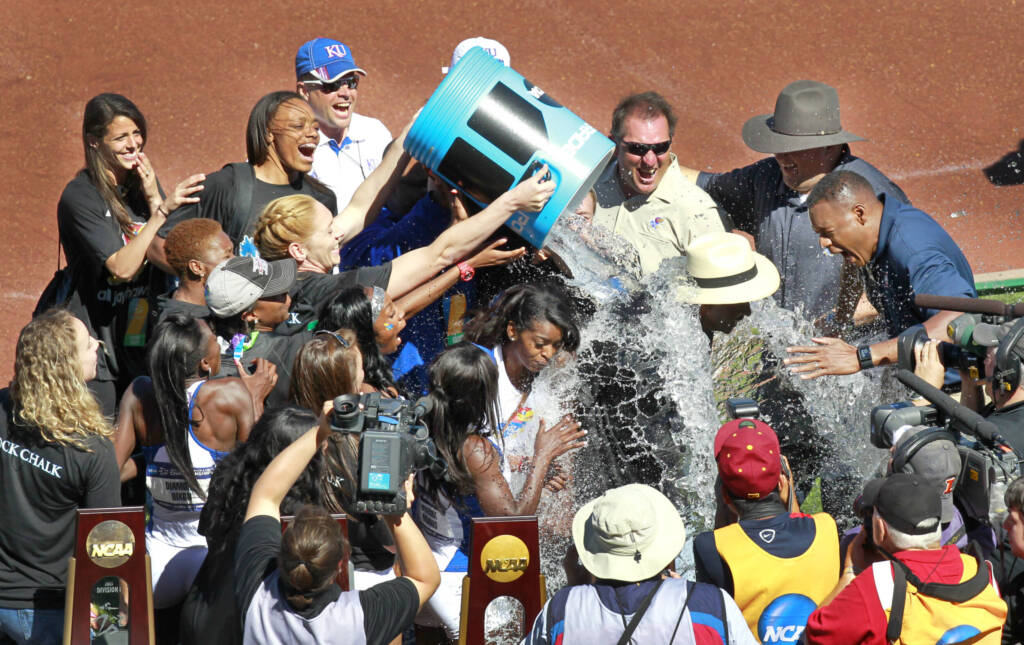 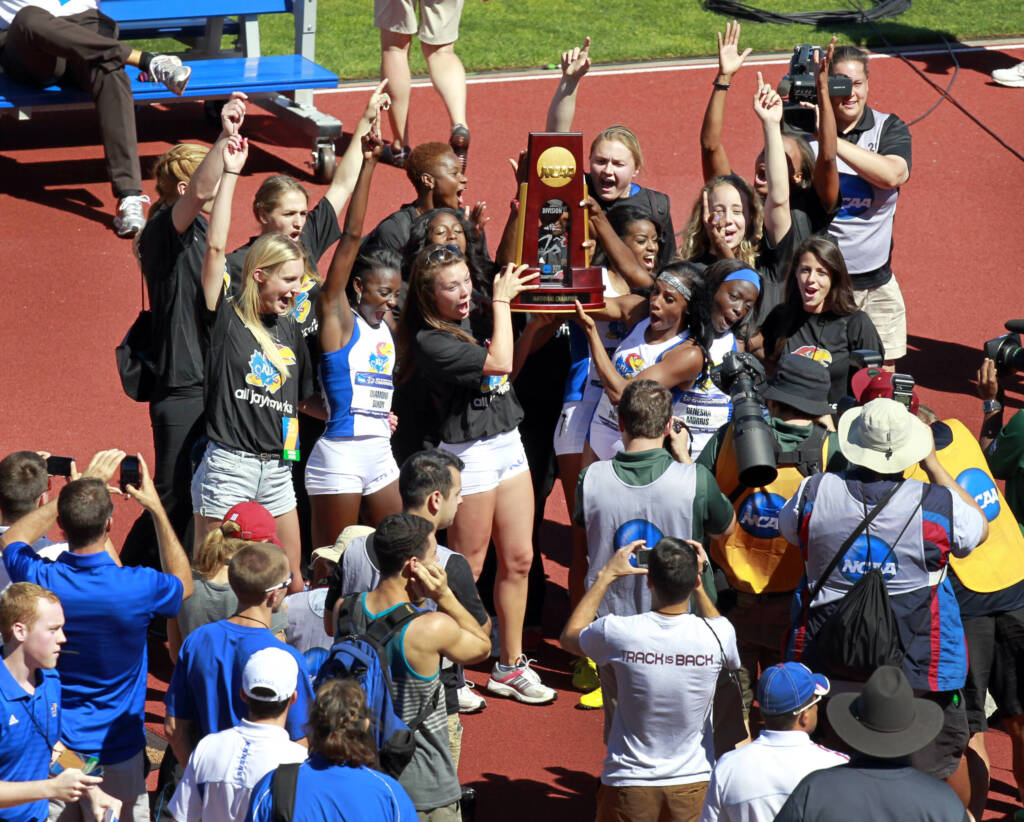 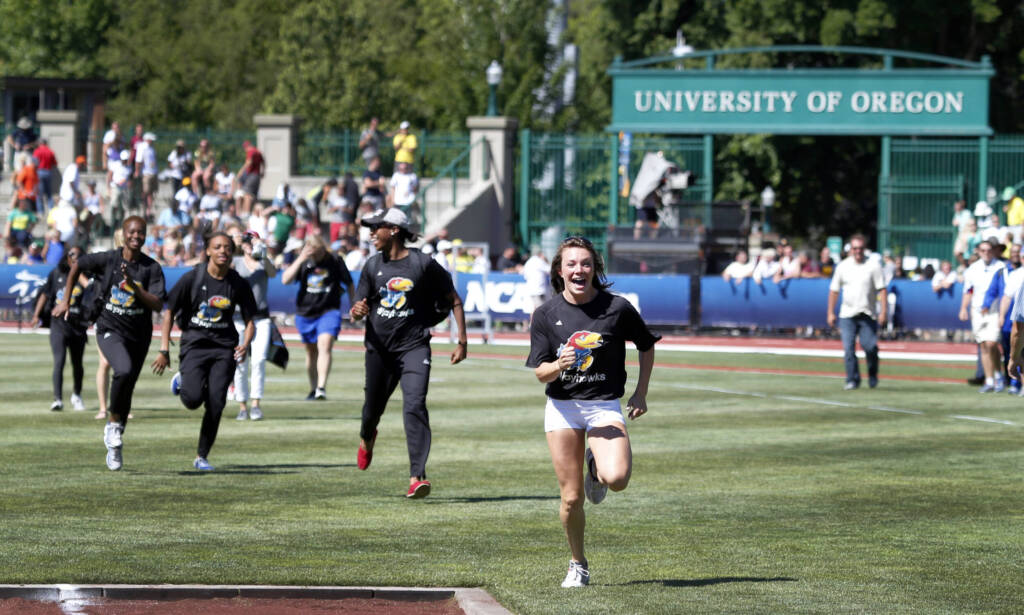