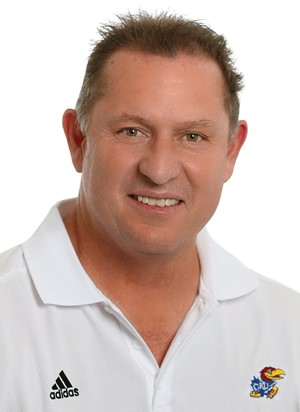 Tom Hays is in his 17th season as the vertical jumps coach at the University of Kansas. Hays is a familiar face to the KU track program, as he competed for the Jayhawks in the mid-80s before receiving his degree in education in 1989.

In 2020-21, Hays guided the Kansas men’s pole vault unit to accomplish something no other school has ever done before, coaching four individuals to over the 19-feet barrier in the pole vault in the same season. Hays coached Zach Bradford, Hussain Al-Hizam, Christian Champen and Kyle Rogers to reach the mark in 2021, which all four vaulters did in the same meet (Rock Chalk Classic). In addition to the historic feat by the KU vaulters, Hays four individuals (Zach Bradford, Hussain Al-Hizam, Rylee Anderson, Samantha Van Hoecke) to five All-American honors in 2020-21, while coaching Bradford and Anderson (twice) to Big 12 Championships in their respective events.

At the conclusion of the 2021 outdoor season, Hays was recognized as the USTFCCCA Midwest Region Assistant Coach of the Year for the second time in his career.

Hays has helped bring the Kansas vertical jumps program to new heights, coaching Hussain Al Hizam to an indoor national championship in the pole vault in 2018, becoming the fourth national champion coached by Hays at Kansas. During the 2019 season, Hays coached Hussain and freshman Zach Bradford to indoor All-American status in the pole vault, while Bradford also earned All-American honors outdoors. Bradford also went on to compete at the USATF Outdoor Championships, before earning a trip to the IAAF World Championships in Doha, Qatar, where Bradford was the youngest representative on Team USA.

Not only did Hays coach Al Hizam to a national championship in 2018, but he also coached the Saudi Arabia native to indoor and outdoor Big 12 titles and a First Team All-America honor at the NCAA Outdoor Championships. Along with the national championship, Al Hizam broke the Kansas indoor school record and Texas A&M’s Gilliam Indoor Stadium facility record. Al Hizam’s Big 12 crowns marked the 11th time in the last 13 years Hays saw at least one of his male athletes vault to a conference title.

In 2013, Natalia Bartnovskaya became Hays’ ninth athlete to win a national title after she vaulted to a NCAA Championship indoors with the seventh-highest mark in NCAA history. She went on to claim the national runner-up finish in the event during the outdoor season, helping the KU women to their first national team title in program history.

Hays was named 2011 National Collegiate Pole Vault Coach of the Year after coaching Jordan Scott to the 2010 NCAA Outdoor title in the event. Additionally, Scott won both the indoor and outdoor Big 12 titles in 2010. Hays also guided Ryan Hays, his son, to a fifth-place finish at the 2010 Big 12 Outdoor meet, as the younger Hays cleared 17 feet for the first time in his career.

In 2007, Hays’ athletes made a clean sweep of the Outdoor Big 12 pole vault titles as KU boasted both the men’s and women’s champions. Junior Sultanova became the fourth woman in Jayhawk history to accomplish the feat and freshman Scott tied the Big 12 record en route to his victory. Scott also won the indoor conference championship in the pole vault and was named the 2007 Big 12 Indoor Freshman Performer of the Year and the 2007 Big 12 Outdoor Freshman Co-Perfomer of the Year. Scott became the first male in school history to receive either distinction. Sultanova went on to earn All-America honors in both the indoor and outdoor pole vault.

Hays coached Sultanova to the 2005 Outdoor Big 12 Championship. Sultanova earned Outdoor All-America honors that year with her seventh-place finish at the NCAA Championships and was named the female Big 12 Outdoor Freshman Performer of the Year.

During his tenure at Arizona, Hays helped develop Arizona’s pole vault squad into one of the top teams in the nation. In his six seasons, he coached 15 All-Americans, four national champions, two national runner-ups and two collegiate record holders.

In addition to his experience coaching at the collegiate level, Hays has also worked at several elite track & field camps and clinics. In 2002, Hays was the IAAF Event Development Coordinator for the pole vault, working with world record holder Segey Bubka. From 1998-2002, he worked with the Kiss the Sky Vault Camp in Flagstaff, Arizona, and for four years he was a guest coach at the Wallsend Track & Field Club. Hays also served as director of the Shocker vault camp from 1992-97.

A native of McLouth, Kansas, Hays earned a B.A. in physical education from KU in 1989. Hays and his wife Rebecca have four children: Amanda, Ryan, Kevin and Kara.