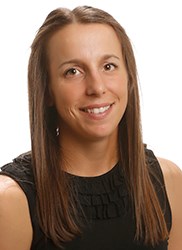 Caroline Lilley was named Assistant Head Coach in December 2018. She joined the Kansas staff as an assistant coach in May 2015 after a successful stint as an assistant coach at Gonzaga, and she made her presence felt immediately. In her first spring season at KU – 2016 – the Jayhawks reached the NCAA Tournament for the first time in 17 years. The Jayhawks finished second in the Big 12 Conference that spring, KU’s highest finish in 18 years. Since then she has helped guide KU to two more NCAA appearances, the Jayhawks’ first NCAA three-peat since earning four-straight berths from 1996-99. And in 2018 Lilley helped lead KU to its first victory in the NCAA Tournament since 1999.

National rankings have become the norm for KU tennis since Lilley’s arrival; the Jayhawks have appeared in the ITA rankings in all or part of every season Lilley has coached at KU. In 2018 KU spent 11-straight weeks in the top-20, including a season-ending ranking of 18 in 2018, the program’s highest end-of-season ranking since 1998 (17th).

Individual players as well have earned national rankings under Lilley’s tutelage. In fall 2017 junior Anastasia Rychagova became the first Jayhawk singles player to be ranked No. 1 in the country, and in May 2018 she became KU’s first singles All-American in 20 years.

In recognition of her work at KU, Lilley was voted ITA Central Region Assistant Coach of the Year in 2018.

A Portland, Oregon native, Lilley spent the two seasons prior to joining the KU staff as an assistant coach at Gonzaga, where in 2014 the Zags earned at Top 75 national ranking for the first time in program history, a feat they repeated in 2015. With her help Gonzaga signed the #7 recruiting class for mid-major schools, the highest-ranked recruiting class in school history.

Before joining the Gonzaga staff, Lilley spent the 2012-13 academic year as a volunteer assistant coach at Purdue. That year the Boilermakers reached the second round of the NCAA Tournament for the second time in school history. In addition, the team achieved a national ranking as high as No. 14, also the highest in school history.

National recognition is nothing new for Lilley. She had an accomplished playing career at both Kentucky (freshman and sophomore years) and Georgia Tech (junior and senior years). She was ranked with five different doubles partners throughout her college career, with a high of No. 6. She was nationally ranked in singles as well, with a high of No. 67.

As a junior she posted a personal-best 26-12 singles record, contributing to Georgia Tech’s consistent presence as a top-15 program in the country.

Graduating with a business administration degree with a concentration in finance, Lilley left Georgia Tech with the second-best doubles winning percentage in Tech’s history – 69 percent (38-17, including 20-7 in dual match play).

Lilley earned her MBA, with a concentration in finance, from Kansas in 2018.

KU Highlights in the Lilley Era