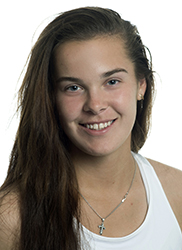 Spring 2018 (Sophomore): Went 15-13 overall in singles, including 7-6 in dual matches at the No. 5 and 6 spots … Ended her sophomore campaign with a 15-18 doubles record … Paired with Nina Khmelnitckaia for a 5-8 overall record, with a dual mark of 3-7 at the No. 1 position … Earned a career-high win against a ranked opponent March 23 after defeating Texas Tech’s No. 8-ranked Sarah Dvorak and Sabrina Federici … Climbed to a No. 76 doubles ranking with Khmelnitckaia, a career-best for Nikolaeva … Contributed to the team’s first NCAA Tournament win in 19 years with a singles win on court five.

Fall 2017 (Sophomore): Ended with a 5-7 singles record and a 9-5 doubles mark … Paired with Despoina Vogasari to go 5-3, including a 1-1 record against ranked opponents … Won four-consecutive matches with Vogasari before falling in the semifinals of the ITA Central Regional … Teamed up with Amber Policare for a 2-1 mark … Also competed with Nina Khmelnitckaia to go 2-1 … Participated at the Rice Invitational, ITA Central Regional, Kansas Invitational and LSU Invitational.

Spring 2017 (Freshman): Totaled an overall singles record of 20-14 during her freshman season, including an 11-8 spring record, seeing time at both the No. 5 and 6 spots … Named to the Academic All-Big 12 Rookie Team … Moved to the No. 5 spot in April and posted a 3-2 mark with four matches going unfinished … Teamed up with Maria Toran Ribes, Janet Koch and Anastasia Rychagova to post an overall doubles record of 17-10, including an 8-4 spring mark … Began the spring paired with Toran Ribes to tally a 5-2 record … Moved up to the No. 2 spot in February to compete with Koch where the duo posted a 3-2 record … Contributed to the team’s second-consecutive NCAA Championship invitation with a win on court five for KU.