The Jayhawks started the game seemingly scoring at will, while also playing stout defense. Kansas scored 24 points in the first quarter, only three points shy for the most first-quarter points in a game this season. KU’s offensive explosion was thanks to its hot shooting from the three-point line, where the Jayhawks made six. Kansas closed the first quarter with an 11-2 run, which was sparked by a layup from junior Tina Stephens at the 3:28 mark. Thomas connected on a three-pointer with 1:36 left to give the Jayhawks the lead, 24-17, entering the second quarter.

STAT OF THE GAME

The Jayhawks next stop will be in Lubbock, Texas, as they take on the Texas Tech Lady Raiders Wednesday, February 12th, at 7 p.m. CT.

She has a career-best with 2️⃣4️⃣ points with 4:15 left in the fourth. 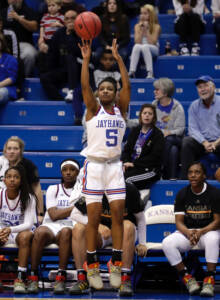 With her fourth basket from downtown, Aniya Thomas set a new career high at 24 points with 5:24 remaining in the fourth quarter! 🔥

Birthday girl, @nogamesniaa, gettin' hers in the paint 💪

Kansas trails by one at the second quarter media timeout.@Aniya5Thomas leads KU with 12 points and three assist!

.@xmerriweatherx with the pick n roll 😏

It's our favorite day of the week… 𝐆𝐀𝐌𝐄𝐃𝐀𝐘🏀